The best vegan apple pie is made with a traditional flaky and tender homemade pie crust and a sweet apple cinnamon filling. It’s the perfect dessert for fall, winter, spring, and summer. Serve it with a dollop of our easy coconut milk whipped cream.

Vegan Pie Crust – Make our homemade pie crust or buy one. We don’t have a gluten-free pie crust recipe, yet. If you want to make one, try this recipe.

Apples – For the best flavor, we like to use a blend of apples to our pie filling.

You can substitute pears for this recipe.

Sugar – If you want a sugar-free pie, skip it and the apples will sweeten it. You can also opt for refined sugar-free and use coconut sugar or maple syrup to sweeten the filling.

Cinnamon – This adds warmth and depth of flavor to the filling.

Lemon Juice – Acid balances the sweetness of the apples. There are no substitutions for this ingredient.

Water – We add about ⅓ of a cup of water to the apples when we cook them to avoid scorching the apples. It will evaporate while cooking, so don’t worry about the filling being too watery.

We like to use a blend of apples. This will give the filling a more interesting flavor than using just one type.

Use two or three different types. These are our favorites.

How to make the best vegan apple pie

For the best apple pie, you can’t beat making pie crust from scratch.

If you’re not feeling ambitious or don’t have time to make crust, then vegan store-bought pie crust will do.

Slice the apples as uniformly as possible. If they’re different sizes, they won’t cook evenly.

Add the apple slices, sugar, cinnamon, and water to a large pan and cook the apples on medium-low heat until they’re just fork tender.

You really must cook the apples before baking or the filling will turn out dry.

Fill the pie crust with the apples and cover the top with another pie crust. Be sure to slice vents in the top crust to allow steam to escape. You can also make a lattice top if desired.

bake for approximately 50 to 60 minutes, or until the pie crust is a light golden brown.

How to make a lattice pie crust

Lay two long strips of dough over each end of the pie plate, like a cross.

Continue adding strips of dough and weave them over and under each other.

This is what the lattice top should look like when you're finished.

It doesn't have to be perfect, so don't worry about it, just have fun.

What to do with extra excess dough

Our pie crust recipe makes enough dough to fill two pie plates. If you have excess dough, roll it out and use cookie cutters to make a pretty decorative addition to the pie, like we did with our vegan pumpkin pie.

Another option is to make little hand pies, hot pockets, or mini apple pies (cut the pie dough and place in a muffin tin, then fill with the apple filling).

Store the pie covered in the refrigerator for up to 4 days. 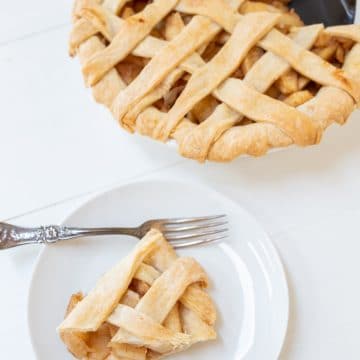 (WITH A FLAKY VEGAN PIE CRUST

NUTRITION DISCLAIMER Use a variety of apples for better flavor. Place the pie pan on a cookie sheet when baking in case of spillage. Storage and freezing Store the pie covered in the refrigerator for up to 4 days. Freeze it in a freezer safe container for up to 3 months. Reheat in a 350˚F (176˚) oven until it’s warmed through.