Blueberry Thyme Skillet Pie! These sweet individual pies are so easy to make, and the blueberry thyme filling is beyond extraordinary. 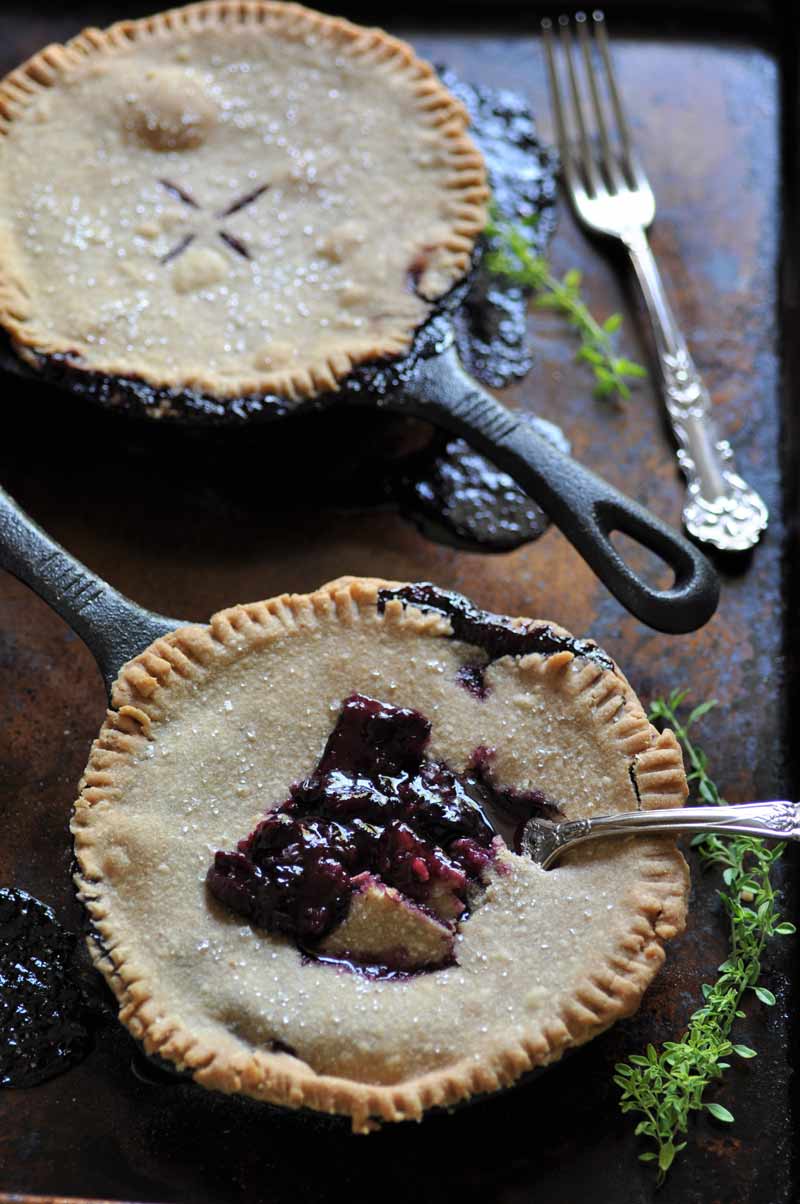 These sweet little blueberry skillet pies are brought to you thanks to my sweeter than pie son. He texted me a few weeks ago, asking if I’ve ever posted a blueberry pie recipe on the blog. I couldn’t believe that I hadn’t. What in the world? How had I not shared one of my favorite blueberry dessert recipes with you? You know why I hadn’t? Because I haven’t made one in over three years!!! Well, thanks to my boy (he’s a man, but will always be my boy), I fixed that gaping hole in my life, and today you get to celebrate the second favorite (apple is first) All-American fruit pie with me.

When I was a kid, the blueberry filling usually came from a can. It was SUPER sickeningly sweet and sticky, yet I loved it anyway, because I was a kid, and most kids love sugar. As I matured, so did my palate, and I shunned that canned filling like the plague. That’s when I started making homemade blueberry pie, and my life became so much better. Okay, that was ridiculous, but also true.

If you read our blog regularly, you know that I love to add unexpected herbs and spices to my baked goods. Have you tried these, or these? If not, you should. Delicious! Adding herbs and spices take ordinary to extraordinary. Don't get me wrong, simple blueberry pie is good, but when you add fresh thyme and lemon to the mix, well, your pie filling will be Grand with a capital G. The thyme and lemon flavors are subtle, but they’re there, and they take the filling to another level. 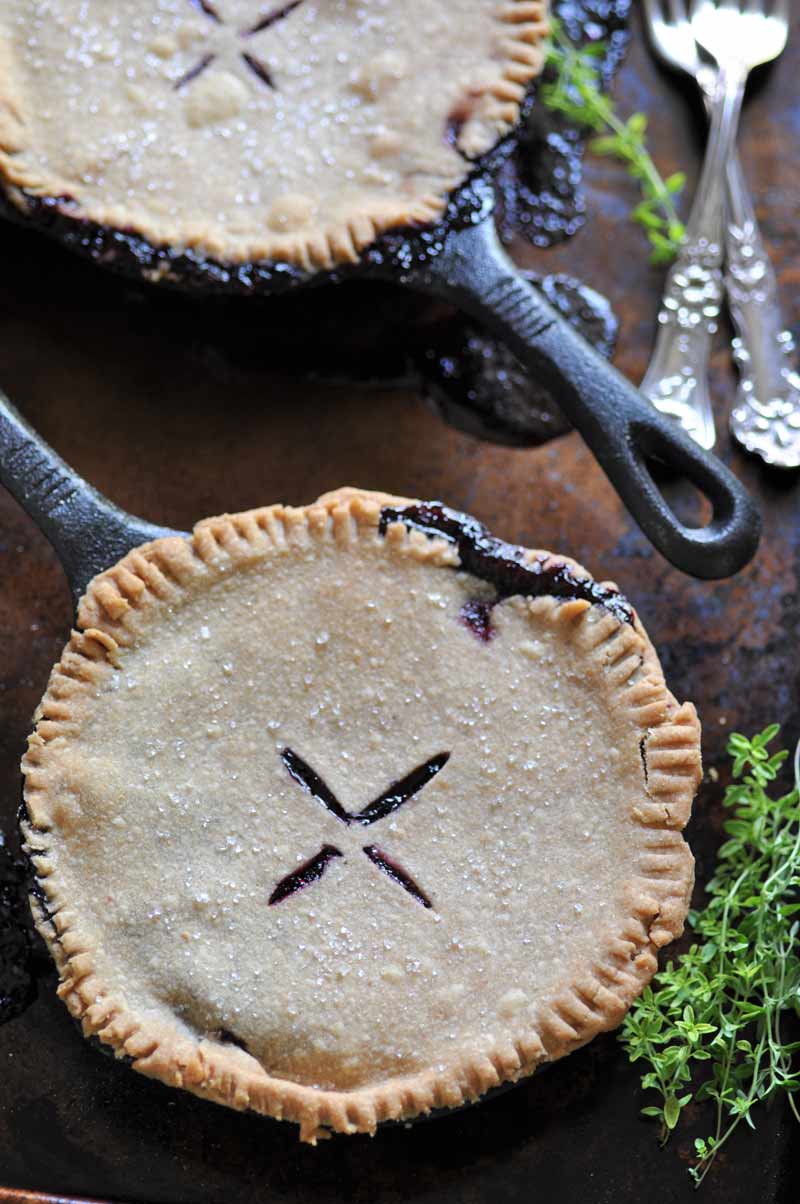 HOW TO MAKE HOMEMADE BLUEBERRY THYME PIE IN AN IRON-SKILLET

Make the crust and then refrigerate for at least 45 minutes.

While the pie crust is chilling, make the filling.

Put the blueberries and the rest of the pie filling ingredients in a sauce pan and bring to a boil, then reduce to a low boil until the liquid begins to evaporate. Once that happens, add some potato starch or corn starch to thicken the mixture.

Put the filling in the refrigerator and let it cool and thicken even more.

Fill the skillet with the pie filling.

Roll out the top piece of dough and pinch the two pieces together. Then, use the tongs of a fork and press along the edge of the pie. Use a knife to cut slits in the top of the center of the pie.

Bake for approximately one hour, or until the crust is cooked and golden brown.

Let cool for at least 15 minutes before eating.

Making a blueberry pie from scratch is easy and something that you’re going to want to do before the blueberry season is over.

Make my homemade blueberry thyme pie in an iron-skillet and come back and let me know what you think. I love to hear from you. 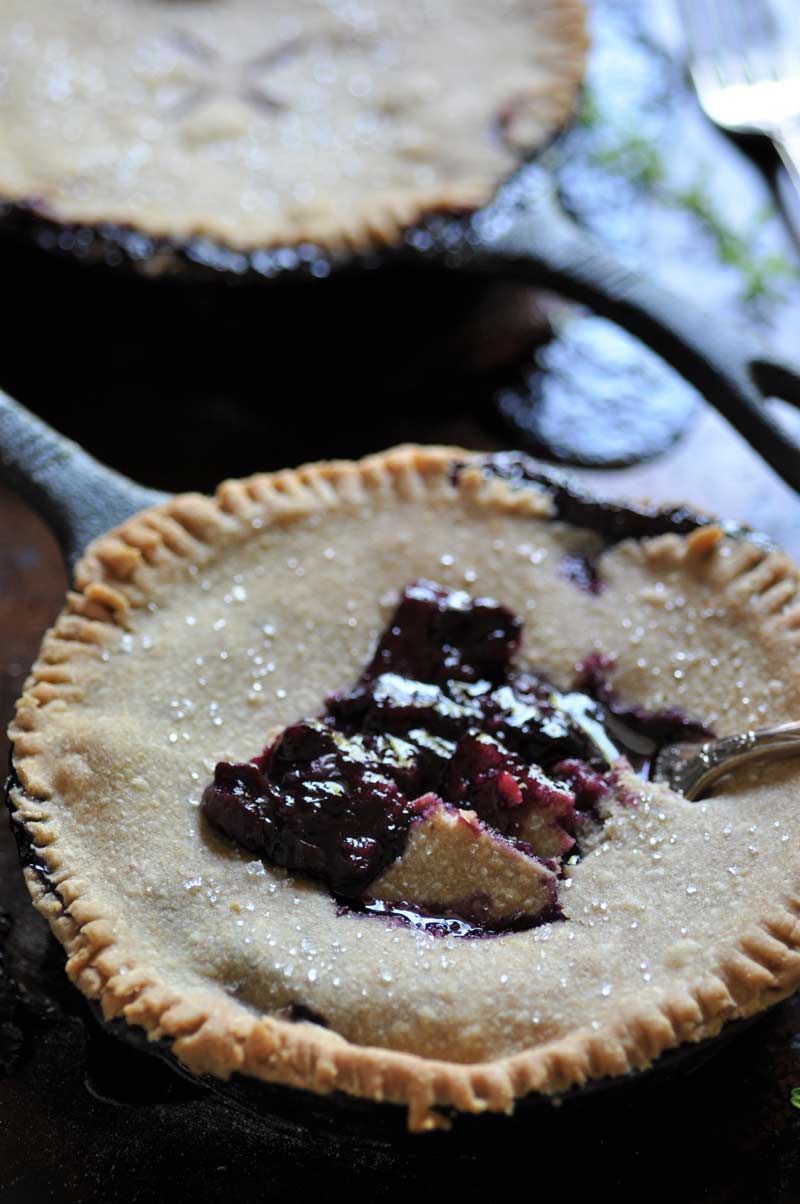 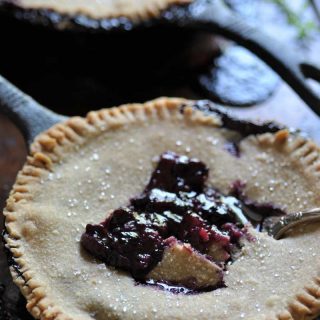 TO CONSTRUCT THE PIE