Learn how to make flaky vegan pie crust! This easy homemade vegan pie crust recipe is every bit as flaky, tender, and buttery as the pie crust we used to make with dairy butter, in fact, we think it’s better. It’s made with simple ingredients and makes enough for two pie crusts.

Vegan Butter – Earth Balance buttery sticks is by far the best for making pie crust. We’ve tried using other vegan brands, and found that they’re either too dry (which makes a crust that cracks when it rolls out) or too oily.

Vegan Shortening – This is a must for making flaky pie crust that holds its shape. We use Crisco vegetable shortening, although you can use whatever brand you like.

All-Purpose Flour – We’ve tried using an all-purpose gluten-free flour to make pie crust, and it turned out dry and crumbly. We’re working on one with almond flour, so stay tuned.

Sugar – A small amount of sugar helps to make the crust tender because it interferes with the development of gluten. You can leave it out if you want, although we think it makes the crust better.

Salt – A small amount of salt enhances the flavor of the crust and makes it taste better.

Ice Water – Cold water prevents the fat from softening when you mix and knead the dough together. The reason you don’t want the butter to melt is because the water in the butter interferes with the gluten, resulting in a less than flaky pie crust.

Use vegan butter AND shortening. Using both will make the pie crust flaky and tender

Cube the butter and shortening before chilling. Cubing it helps it break down quicker so it stays chilled.

Freeze the plant-based butter and shortening for 10 to 15 minutes so it gets super chilled. If the fat is warm, the crust will not turn out as well.

Use a silicone rolling mat. This will help you measure the size of the pie crust and make cleanup easy.

Ice water is key for making flaky crust because it keeps the fat chilled. Add a little extra if the pie dough is dry and crumbly.

Wrap it in plastic wrap and chill for one hour before rolling it out. Again, the fat needs to be chilled for the best result.

If you chill it for more than an hour you may find that it’s hard to roll out. In that case, let it sit out on the countertop for 15 minutes and try again.

If you need to freeze it, roll it out, place it in the pan that you’ll bake it in, and wrap it in a freezer safe container for up to 3 months. Don’t freeze the ball of dough.

How to make a vegan pie crust from scratch

Cube the butter and shortening and then place in the freezer for 10 to 15 minutes so it gets nice and cold.

In a large mixing bowl, whisk the dry ingredients and the vinegar until well combined.

Cut the butter and shortening into the flour mixture with a pastry cutter.

The fat should look like pebbles in sand when it’s ready.

Add one tablespoon of ice water at a time and stir until the dough forms a ball. It shouldn’t be dry and crumbly or too wet and sticky.

The dough should be tacky to the touch, just a slight stickiness.

On a lightly floured surface, gently knead the 2 or 3 times, then fold in half, pat, and knead 2 more times and roll into a ball.

Wrap it in plastic and chill in the refrigerator for an hour.

How to roll a pie crust

Rolling out pie dough is easy if you follow these simple rules.

Lightly flour a smooth surface, such as marble, or use a silicone pie mat. Don’t use a wooden board or anything with texture or it will stick.

Place the top of the pie pan over the rolled-out dough, it should be about 2 inches wider than the pan.

Lightly flour the rolling pin once more and then gently roll the dough onto the rolling pin, place it on the edge of the pan with about an inch of overhang, and unroll it over the pan.

Place the dough in the freezer for 30 minutes before blind baking or filling and baking. This will prevent the crust from shrinking and ensure that the fat is chilled for a flakier pie crust.

How to blind bake a pie crust

If you’re making a pie that doesn’t require baking the filling, such as a lemon meringue pie, you’ll want to blind bake the crust.

Bake the crust for approximately 40 minutes, or until it’s a light golden brown.

If the edges start to brown too much before the bottom of the pie crust, carefully cover with foil or pie crust shields.

How to make a lattice top with pie dough

Roll the dough in a circle, approximately ⅛ of an inch thick, then use a sharp knife to slice strips of dough. They should all be the same width.

Place the longest strips of dough over the center of the pie, like this.

Take the next longest strip of dough and lay it over the top of one of the strips and then place another strip in the opposite direction. Gently lift the bottom strip to layer. Like this.

Continue the process (largest to smallest as you move from the center to the ends of the pie).

Wrap the dough in plastic wrap and store in the refrigerator for up to 2 days. Let it warm up for about ten to fifteen minutes if it’s difficult to roll out.

To freeze, roll it out and put it in the pie pan, place in a freezer safe container or cover for up to 3 months.

What to do with leftover pie dough

If you want to make a really decorative pie, roll out the extra dough and use cookie cutters to decorate the top, like we did with our pumpkin pie.

You can also make cinnamon sugar pie crust chips and use them to dip into a sweet sauce. 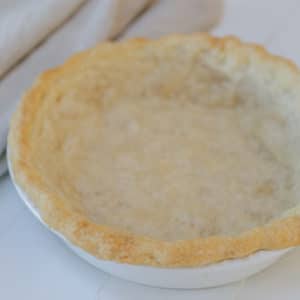 NUTRITION DISCLAIMER If you can't find vegan shortening you can use all vegan butter. I've made it both ways and it works a slight bit better with the shortening, but still great with all butter. Refrigerate in a sealed container for up to three days or roll out and put in a pie pan freeze for up to one month. Be sure to store it in a freezer safe container.