This classic vegan banana cream pie recipe will impress even the pickiest pie connoisseur, including non-vegans. No one will ever believe that this pie is dairy and egg-free. The custard filling is rich and creamy, decadent, and delicious. If you love this, you’ll also love our vegan Southern banana pudding recipe. 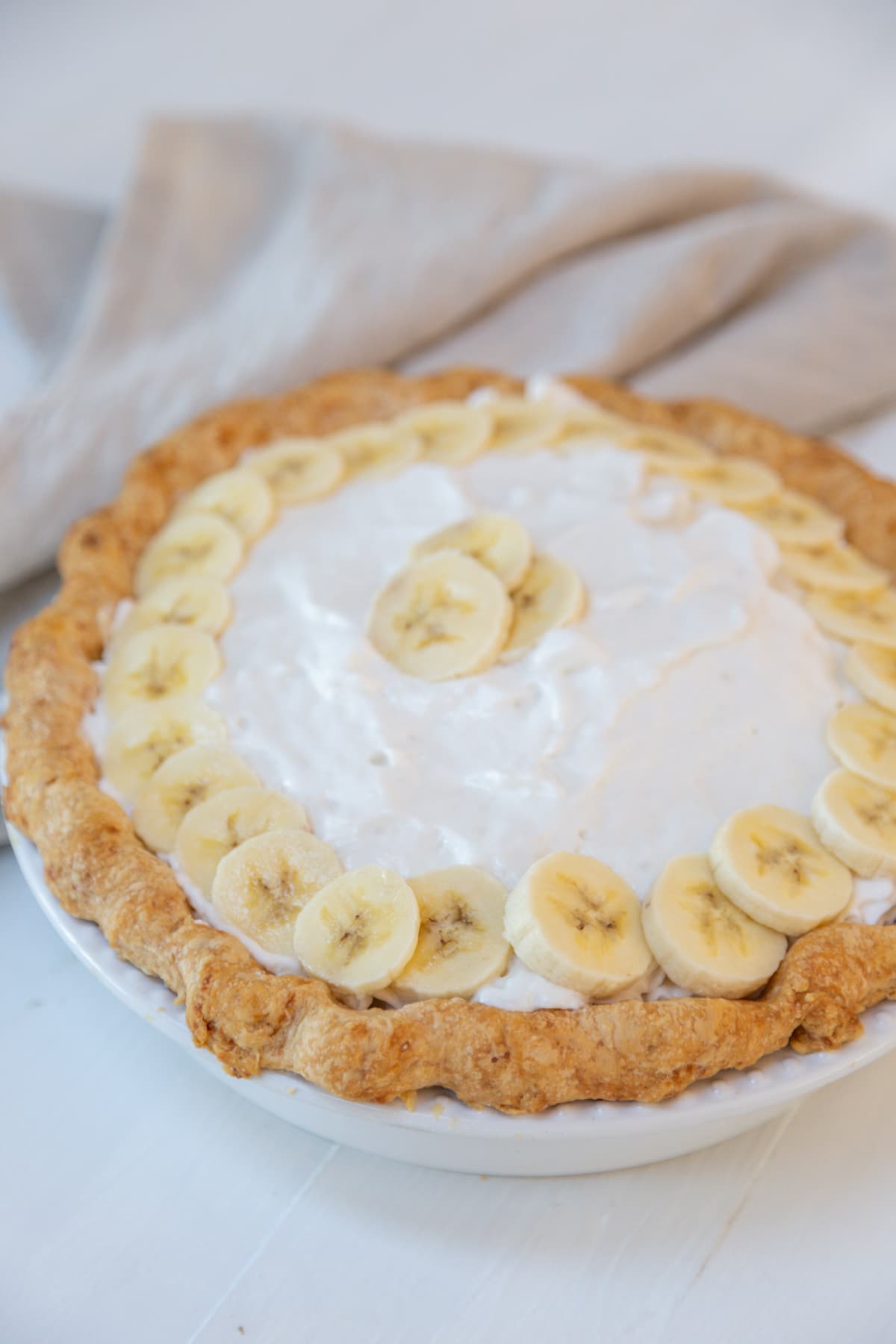 There are lots of opinions about what kind of crust is best for banana cream pie.

Some people like a graham cracker crust, and others prefer a traditional pie crust.

We agree with going traditional, only because the pie on its own is sweet and adding another element of sugar takes away from the vanilla pudding and the bananas.

We’re also not fans of uber sweet desserts, so there’s that.

In our opinion, our homemade vegan pie crust is the perfect base for this easy banana cream pie recipe.

Since this is a no-bake pie recipe you will have to blind bake the pie crust. 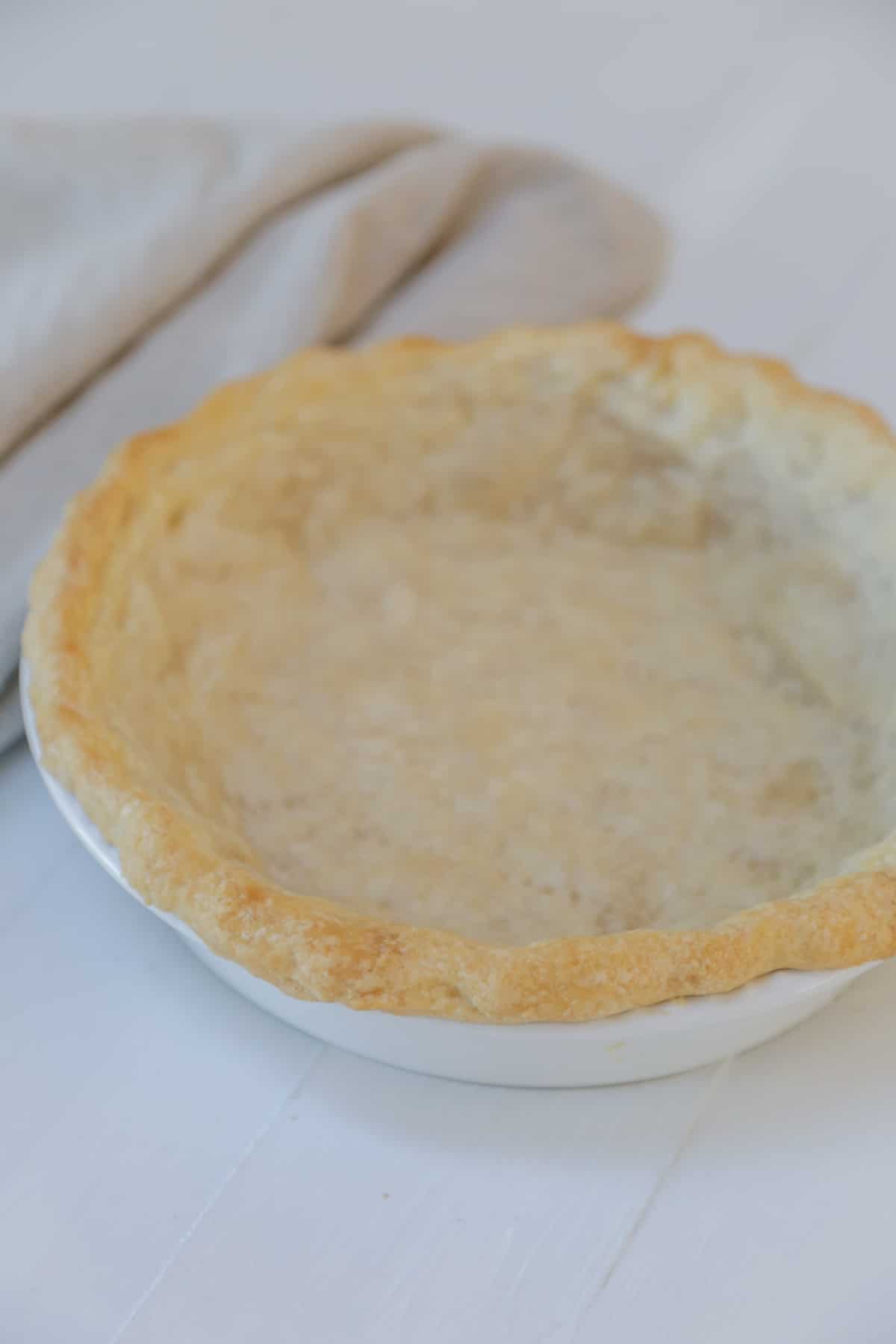 How to Blind Bake Pie Crust

This is a super easy process, so don’t be intimidated.

Make the pie dough, roll it out, and put it in the pie pan. Pierce the bottom of the dough with a fork all over the surface.

Crimp the edges of the dough and then place it in the freezer for at least an hour.

This will help to prevent the crust from shrinking when it bakes. Additionally, the colder the fat, the flakier the crust will be.

Although you’ve pierced the bottom of the crust with a fork, which helps to prevent the crust from puffing up on the bottom, we also suggest weighing it down.

Just tear off a large piece of parchment paper and put it in the pie pan.

Place dried beans or pie weights on the parchment paper and gently spread them evenly over the bottom of the crust.

This will help to keep the bottom of the crust from puffing up and looking lumpy and uneven. 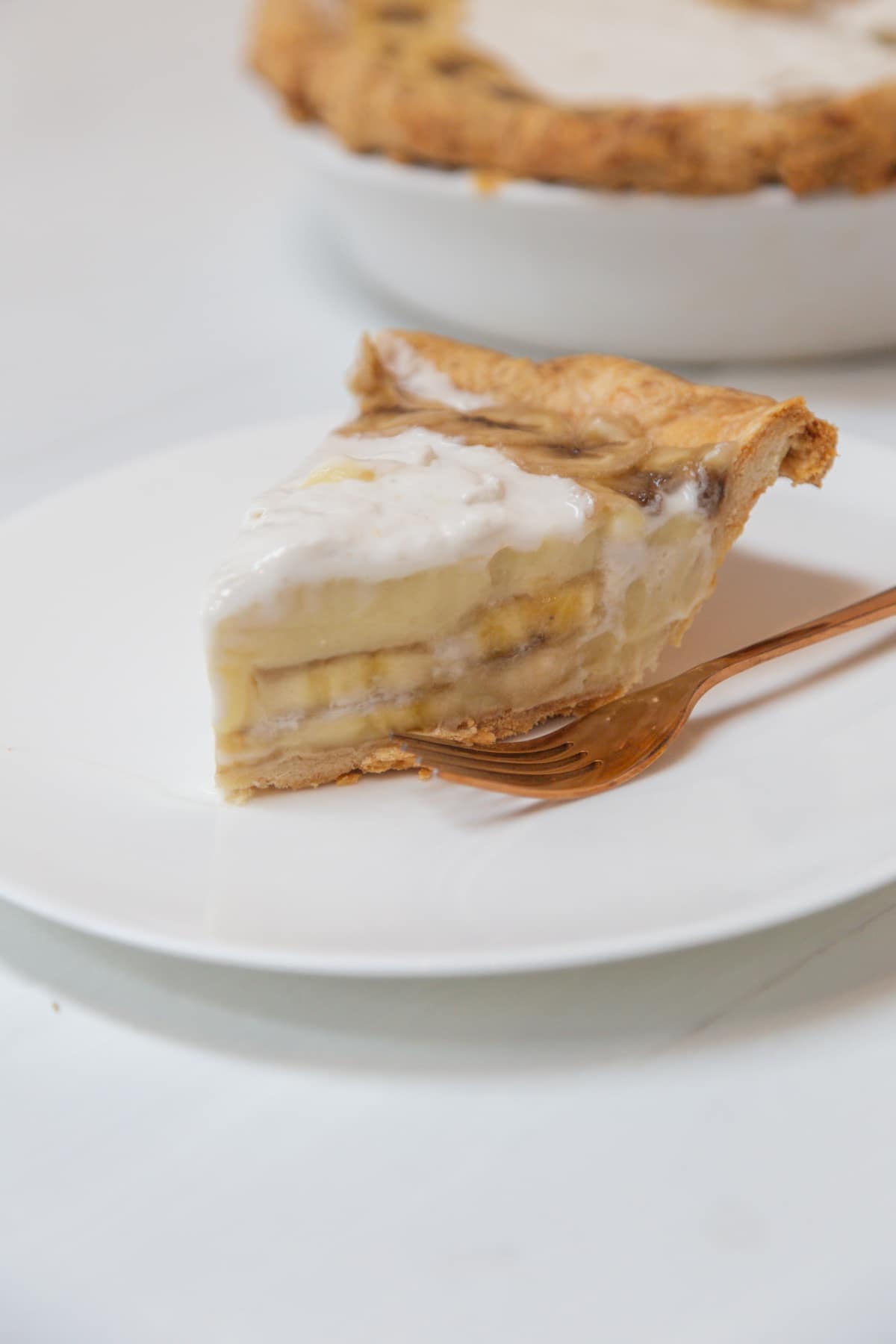 How to Make the Pie

Once you’ve made the pie crust, it’s time to make the vegan vanilla pudding.

It may seem a bit confusing that we’re using vanilla filling instead of banana pudding, because it is a banana cream pie, we get it.

Here’s the thing, the sliced bananas give it all of the banana flavor it will need. The vanilla pudding balances it out.

Whisk for approximately five minutes, or until the mixture thickens into pudding. You’ll need to whisk continuously so the pudding doesn’t scorch.

Add the refined coconut oil and whisk until it melts completely.

NOTE: Please don’t leave out the oil. This is what helps the filling to become firm so you can cut it.

If you leave it out, you’ll have a pudding pie.

Turn the heat to low.

We use JUST to make this recipe because it responds exactly like real eggs and it makes the creamiest, thickest pudding.

The egg should already be poured into a bowl or measuring cup.

Slowly whisk the pudding into the egg mixture. You’ll need to slowly pour this in while continuously whisking so the egg doesn’t curdle.

Now, slowly whisk the tempered egg mixture into the pudding.

Turn the heat up to medium-low and whisk continuously for another four to five minutes, or until the pudding is thick.

Remove from the heat and let cool for five minutes. 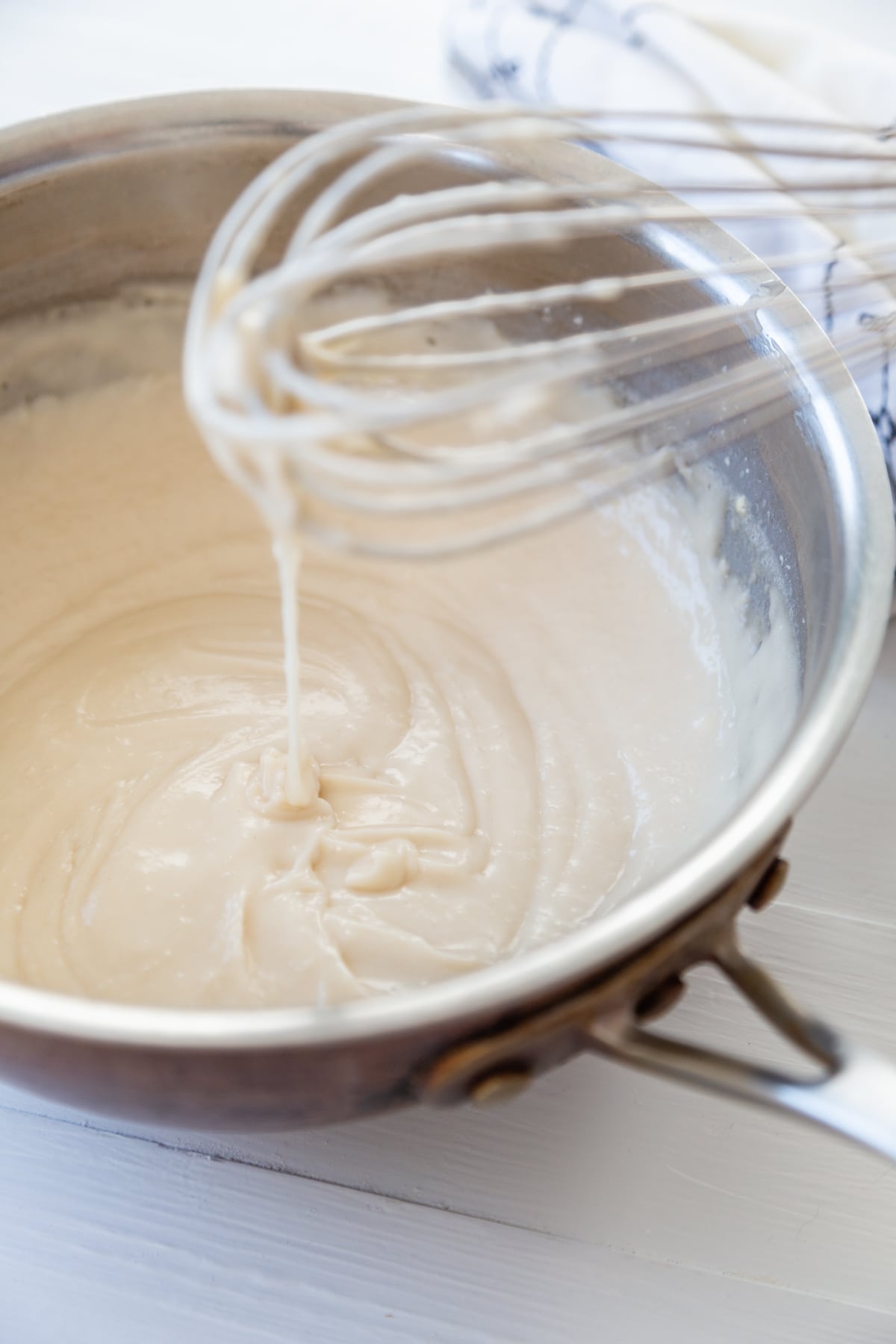 While the pudding is cooling, evenly slice the bananas and spread them out in two layers on the bottom of the pie crust.

Evenly pour the pudding filling over the bananas. 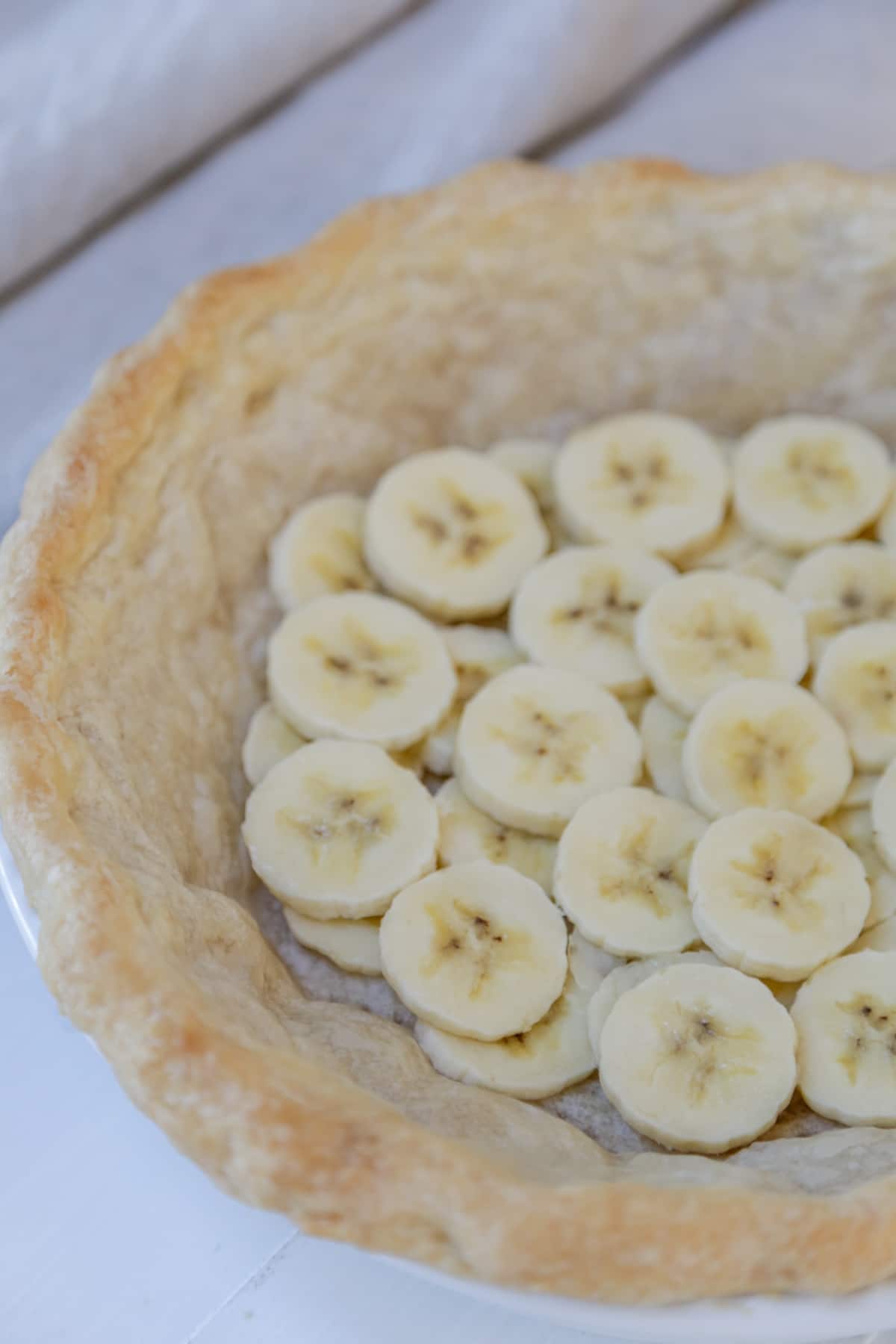 Cover the pie with plastic wrap, getting the wrap as close to the pudding as possible.

This will prevent a skin from forming on the top of the pudding.Refrigerate overnight or for at least six hours. 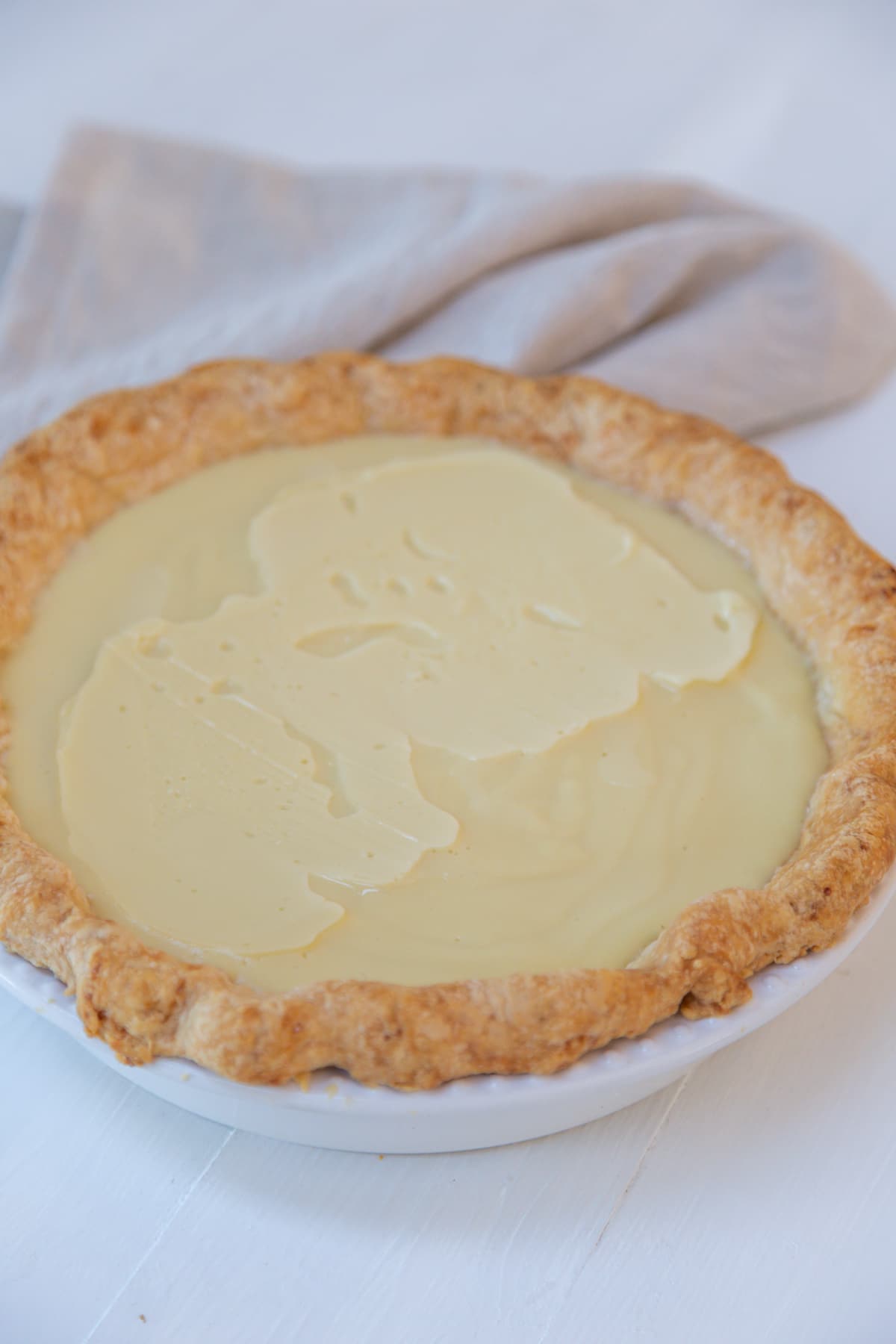 Remove the plastic wrap from the pie and cover with vegan whipped topping and decorate with freshly sliced banana. 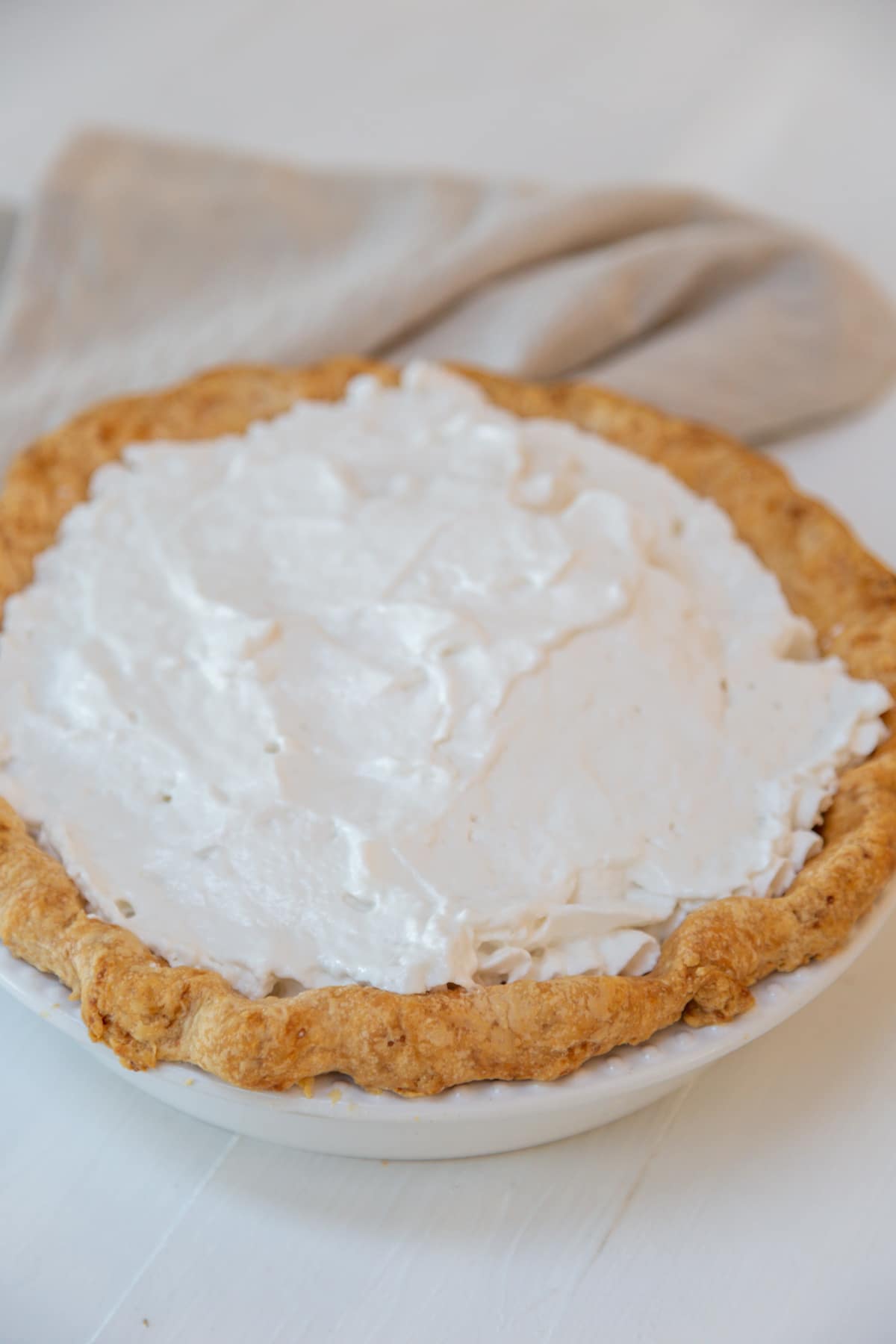 You have lots of options when it comes to what kind of whipped cream to use for this pie recipe. 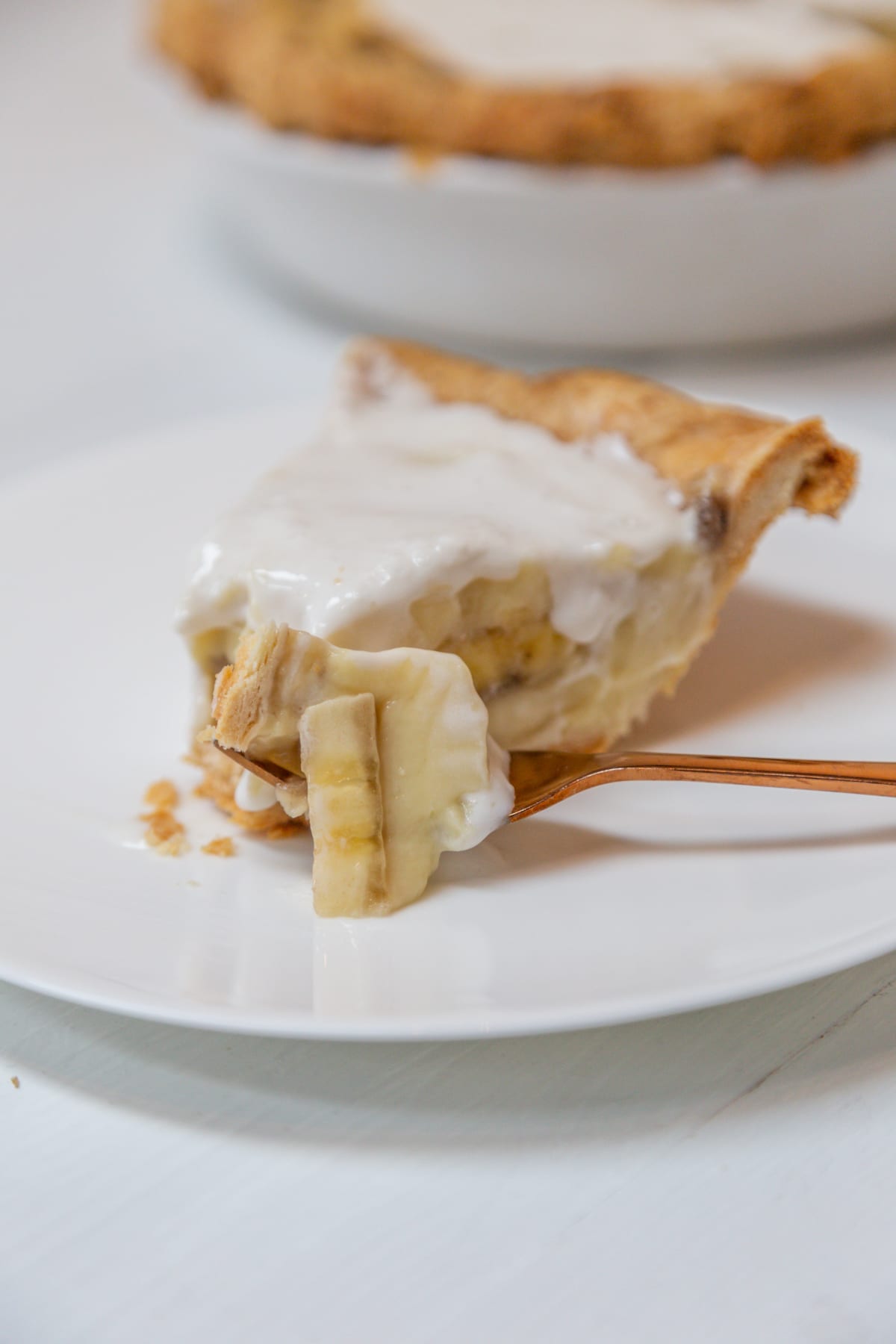 How to Store it

The pie should be covered and refrigerated. It will last for 3 days in the refrigerator, although the bananas will begin to brown.

You can freeze this in a freezer safe pie container for up to 2 months, although the bananas will brown. Thaw in the refrigerator.

Make our classic vegan banana cream pie recipe and let us know what you think. We love to hear from you! And, don’t forget to take a picture of your gorgeous creation and tag us @veganosity on Instagram. 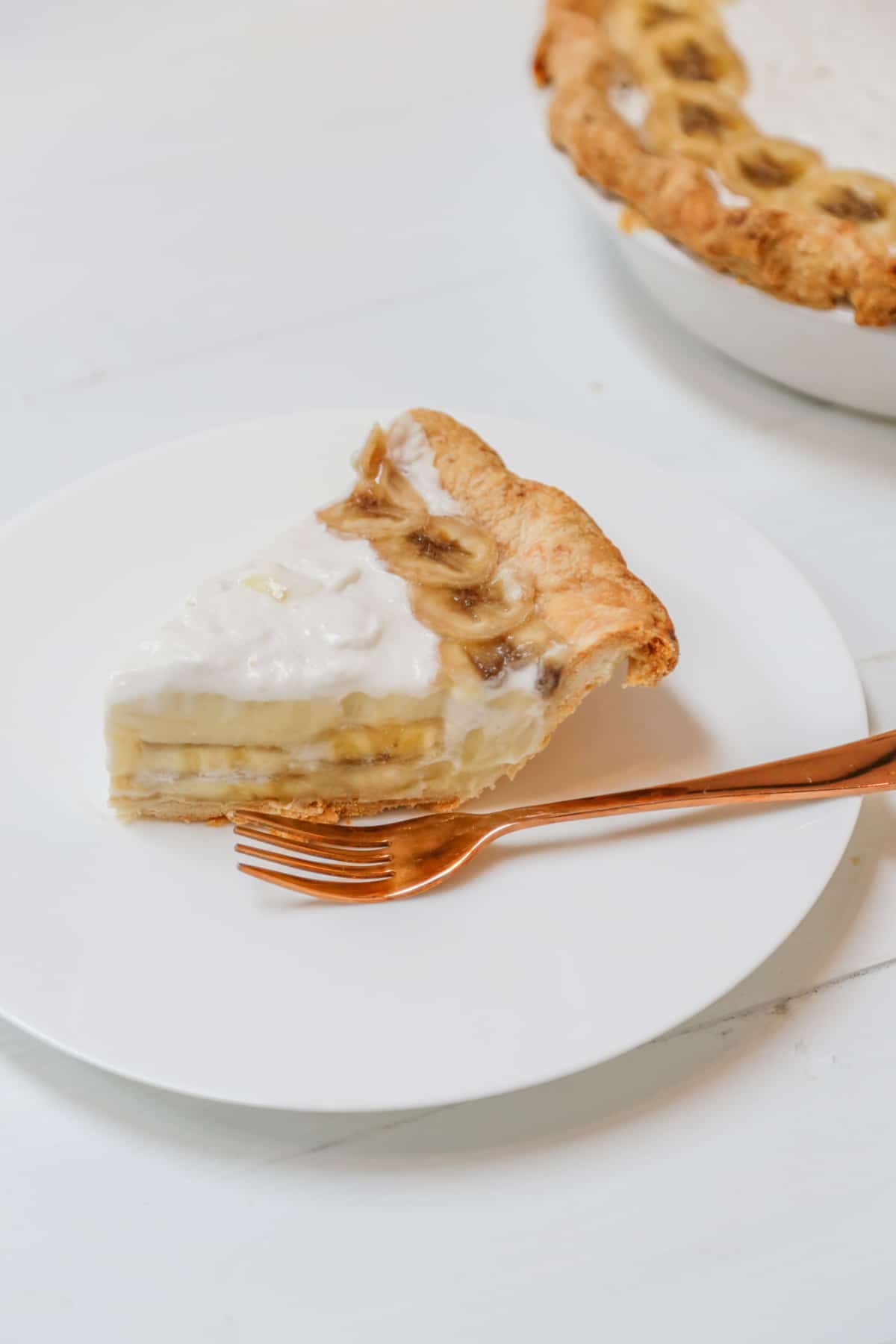 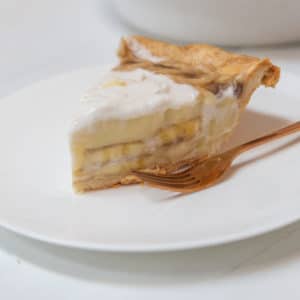 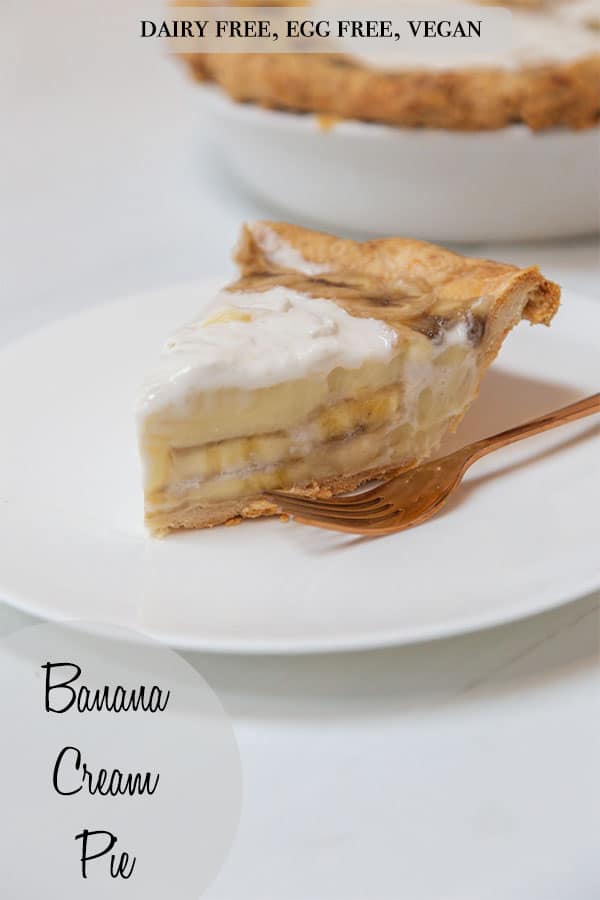 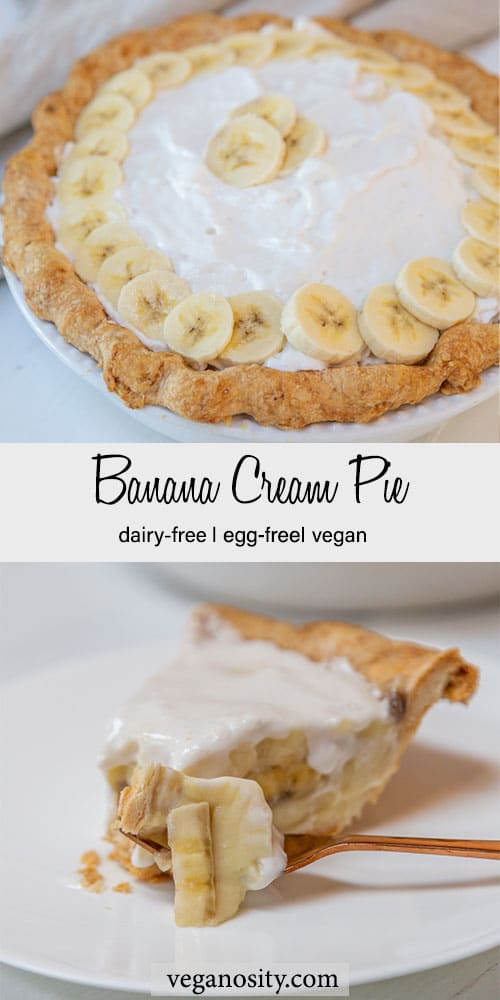 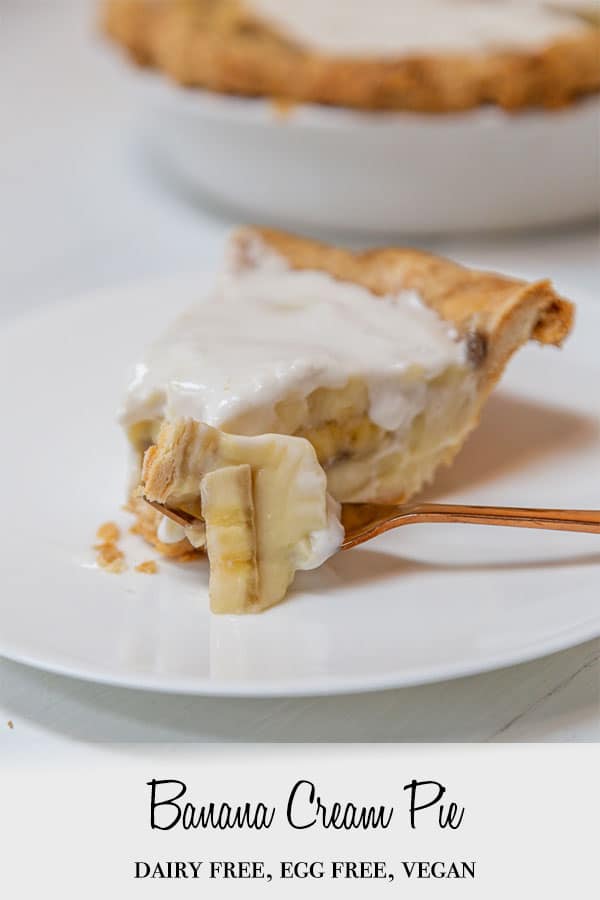 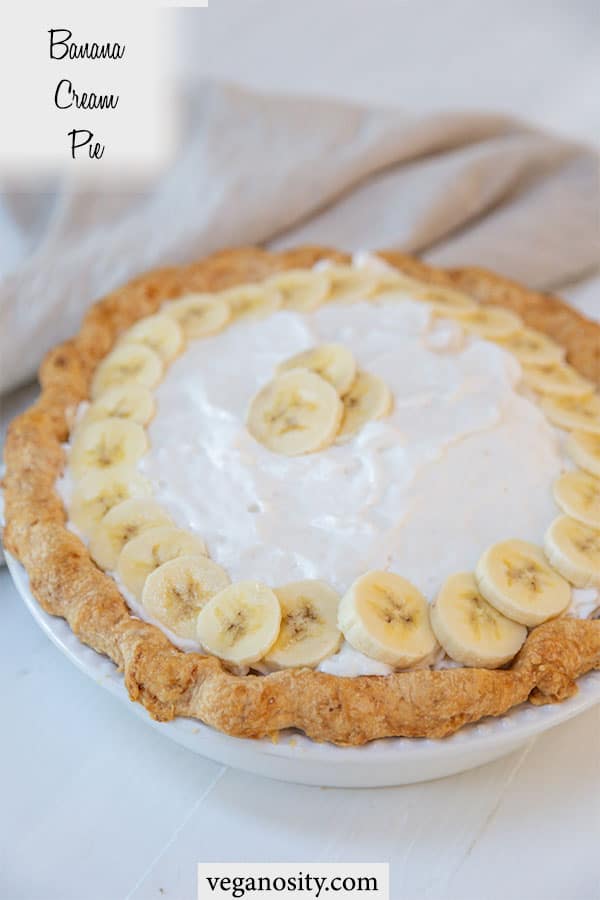 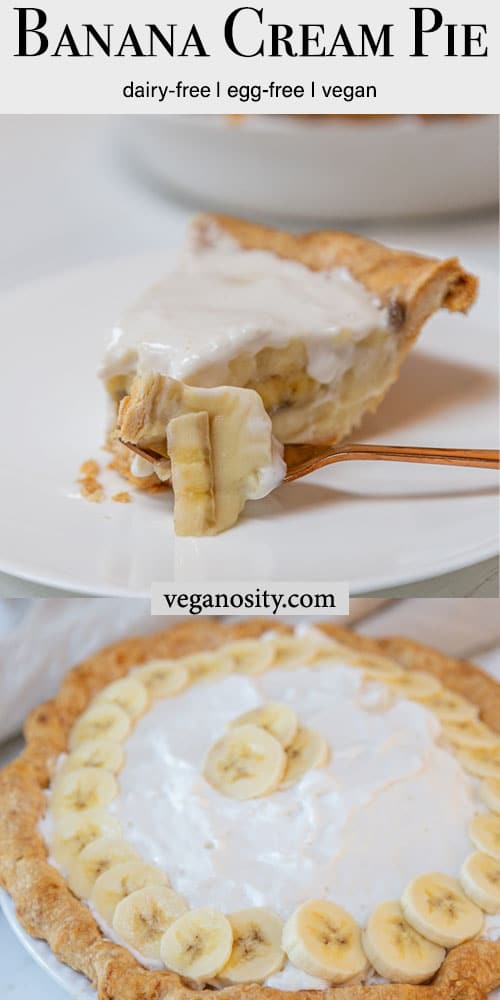