This vegan buttermilk waffles recipe is so good. You’ll only need one bowl and a big appetitewhen you make these. They’re everything a good waffle should be; crispy on the outside and tender on the inside. Serve them with our tofu bacon and/or our vegan breakfast sausage patties for a delicious breakfast, lunch, or even for dinner. 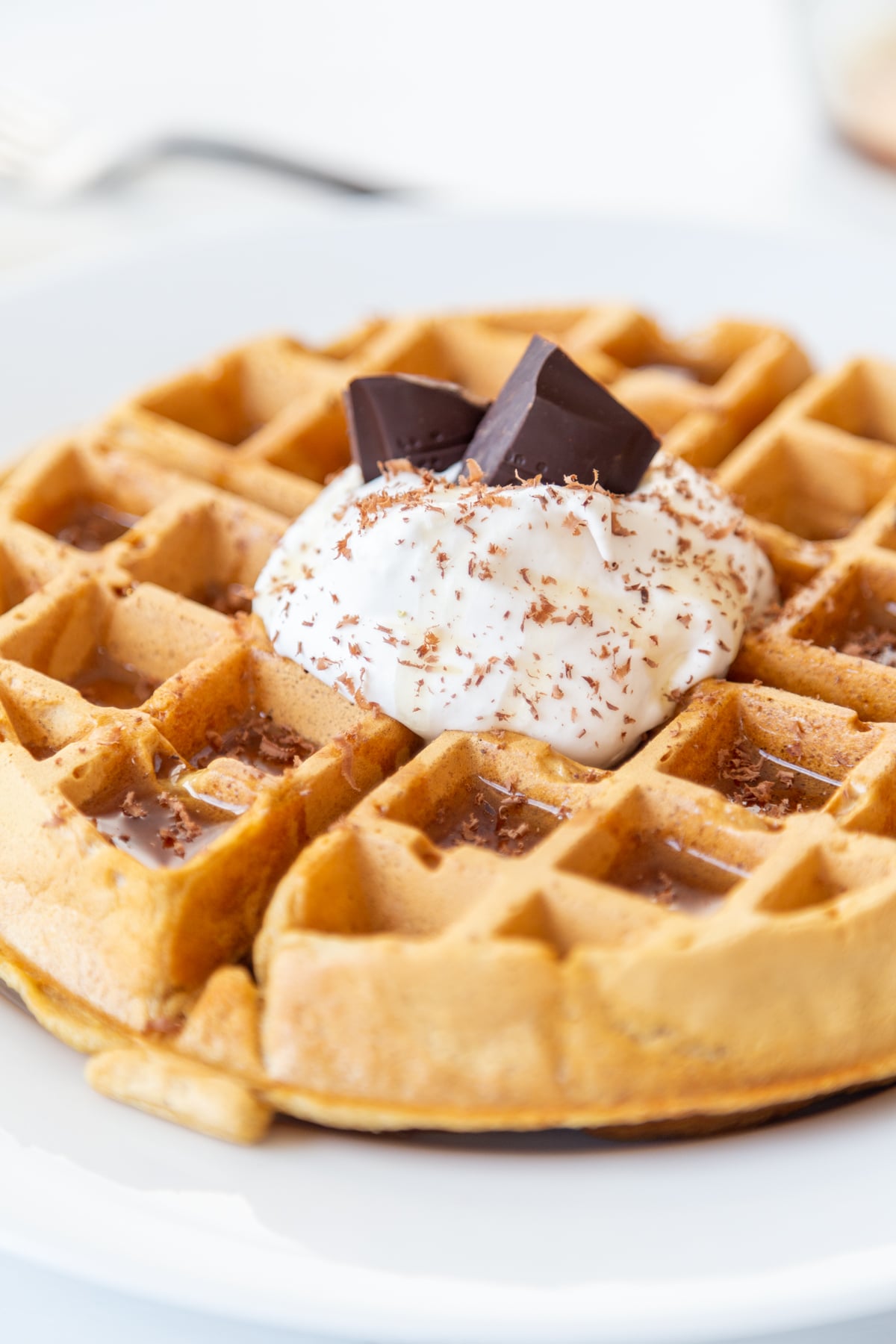 Our egg-free and dairy-free waffles are the best for three reasons:

Are you a fan of Waffle House waffles? If you are, then these simple vegan Belgian waffles are going to make you so happy.

If you’ve never tried them, then we truly believe that you’re going to become a big fan.

They’re everything that waffles are supposed to be.

They have a crispy golden-brown crust and when you dig your fork into them, you’ll find a fluffy center that melts in your mouth.

Sound good? Great, let’s make some, but first, let’s talk about how we made them vegan. 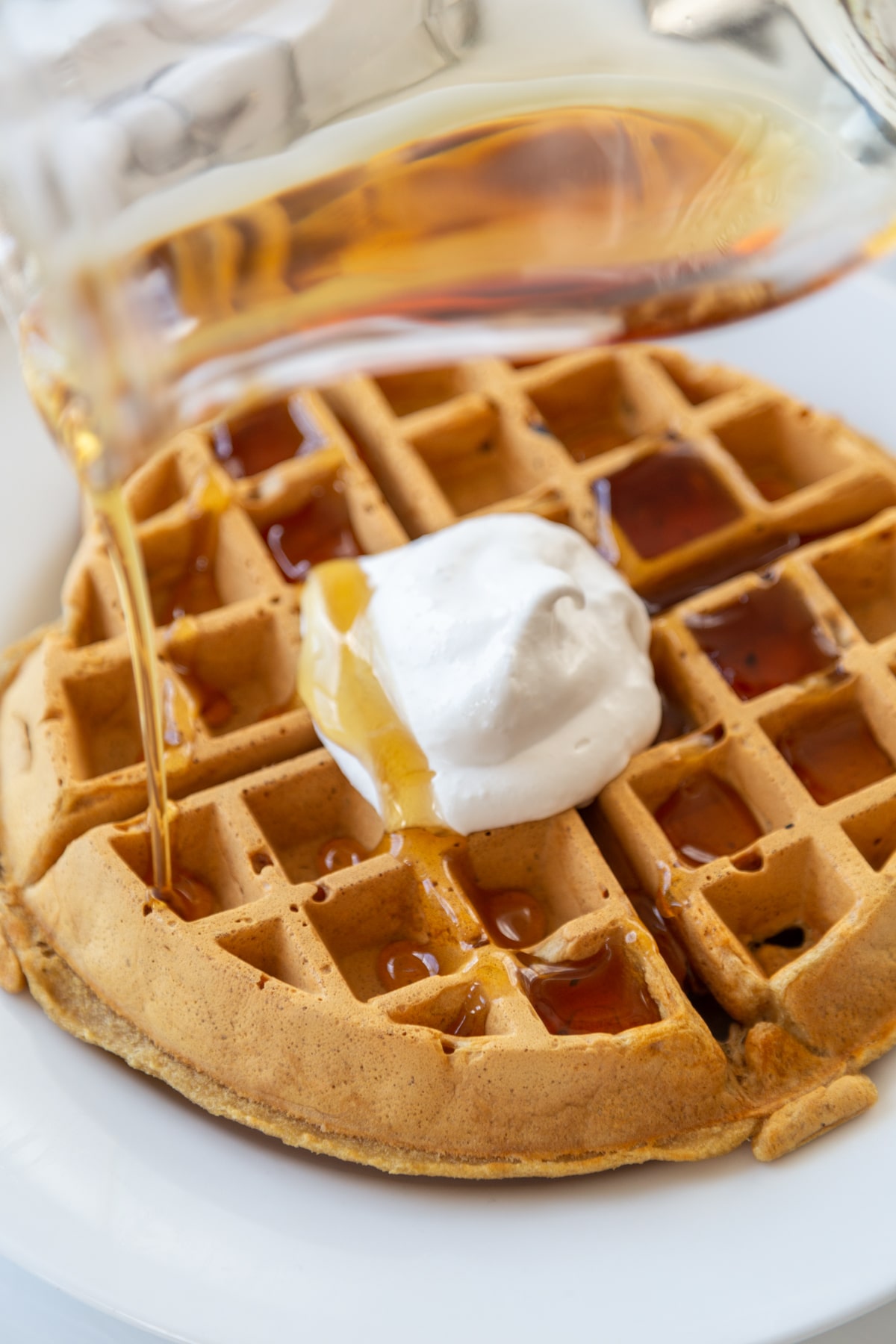 How Do You Make Waffles Vegan?

There are several ingredients that you can use in place of eggs.

Follow Your Heart Vegan Egg or JUST egg are our favorite egg substitutes because they truly mimic the chemistry of eggs and the texture of the waffles are spot on.

Ground flax seed and water make a great substitute. They do add a bit of heaviness to the recipe, but they work well.

Mashed banana also works, but like flax seed, it gives the waffle a denser texture.

Any powdered egg substitute, such as Bob’s Red Mill or Ener-G egg replacer.

How Do You Make Vegan Buttermilk

Buttermilk is fermented milk that has a tanginess to it. To make vegan buttermilk, add a tablespoon of apple cider vinegar or lemon juice to one cup of unsweetened plant milk and let it sit for a while.

Eggs and milk are the only two ingredients that you need to substitute to make vegan waffles, and as you can see, you have lots of options.

How Do You Make Vegan Buttermilk Waffles?

Whisk the unsweetened plant milk and apple cider vinegar (or lemon juice) together and let it sit for 15 minutes.

Whisk the flour, baking powder, baking soda, sugar, and salt together in a large bowl. Make sure the ingredients are completely combined.

Stir the vegan buttermilk, canola oil, and vanilla extract into the dry mixture until it’s combined.

The batter should be thin enough to pour into the waffle iron, but not watery.

Don’t overdo it or the waffles will turn out tough. 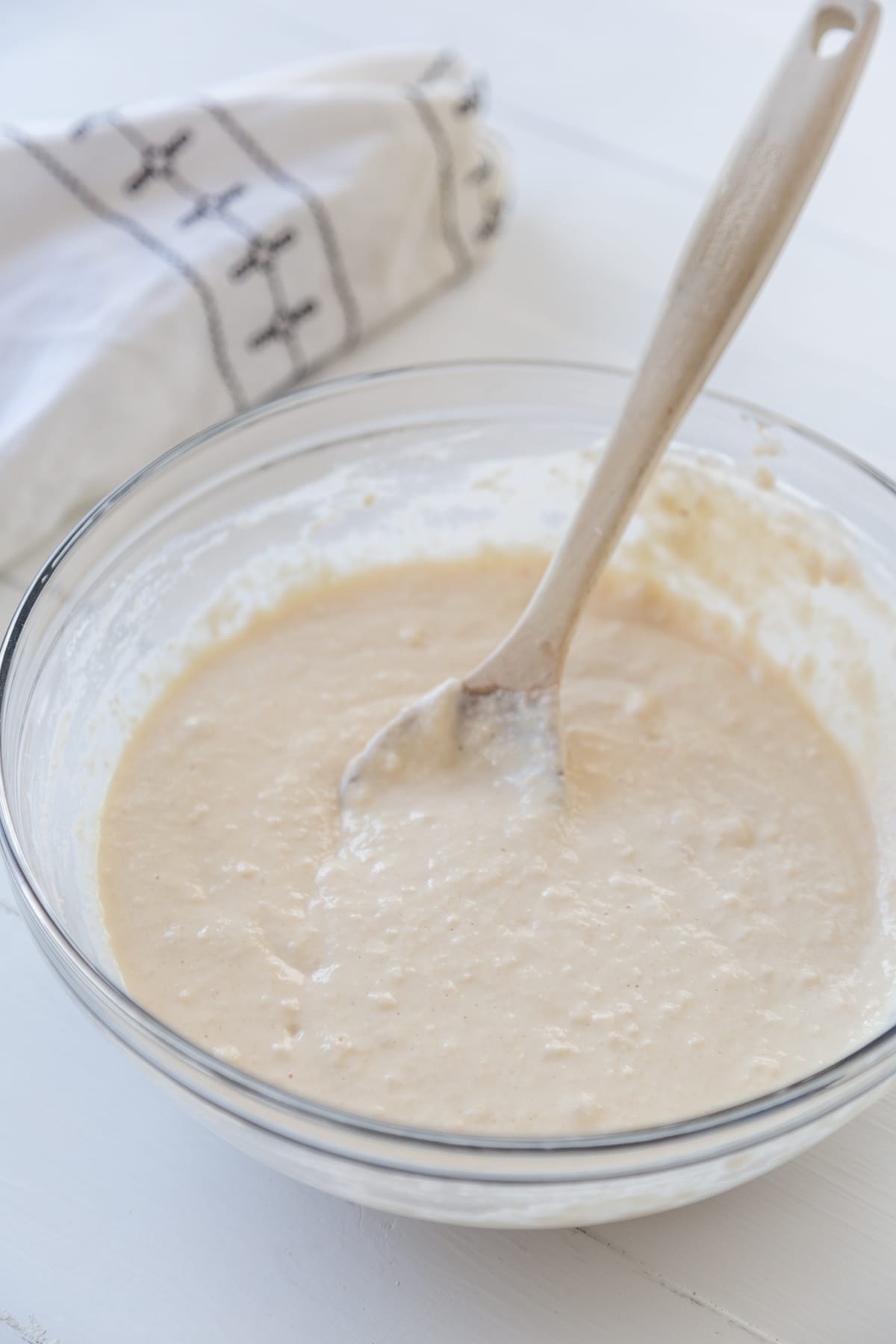 Heat the waffle iron and brush with a light layer of oil to prevent the waffles from sticking.

Fill the iron with waffle batter and close the lid. Follow the cooking time for your iron. 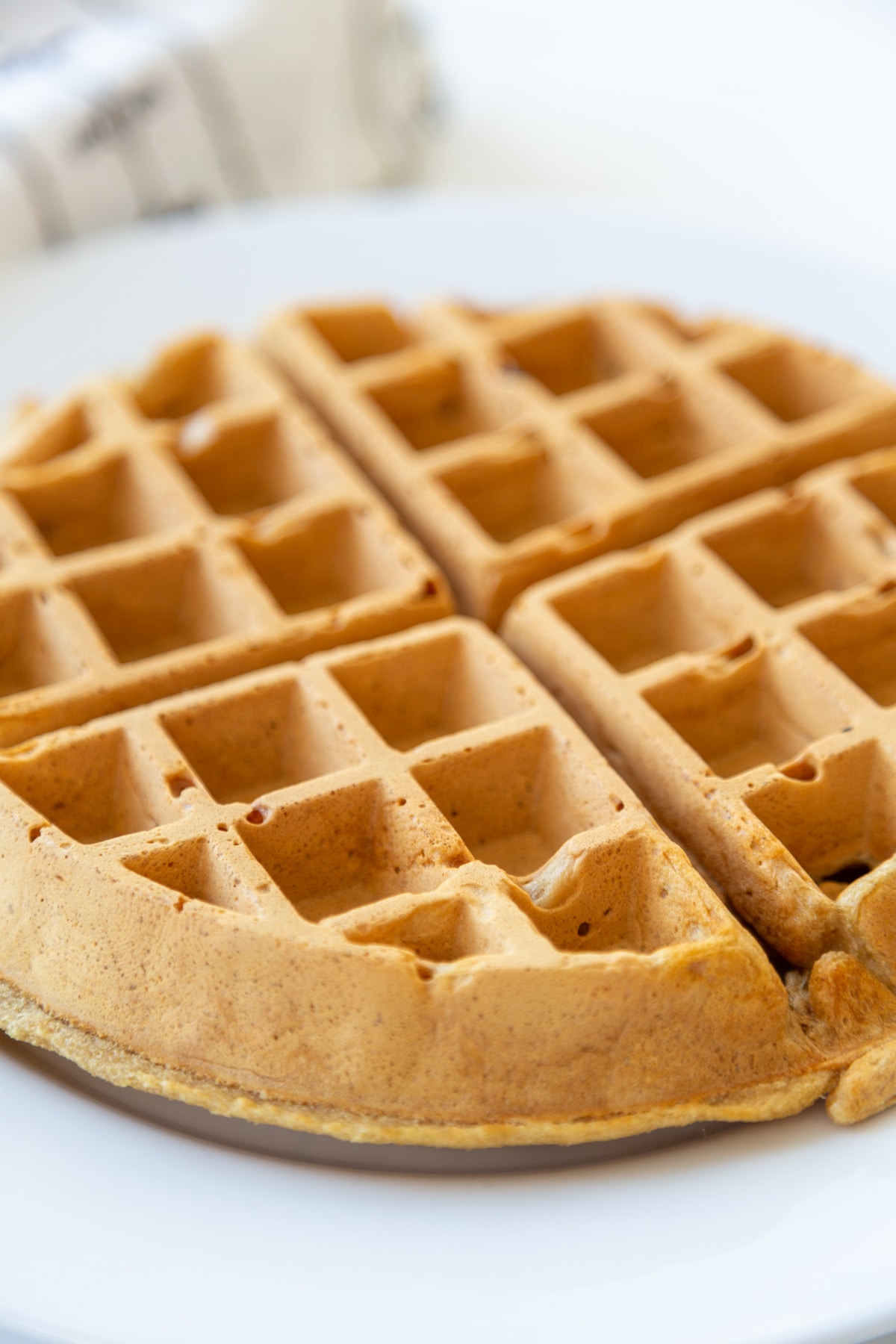 What to Serve with Waffles?

You can also add chocolate chips or toasted pecans to the batter. 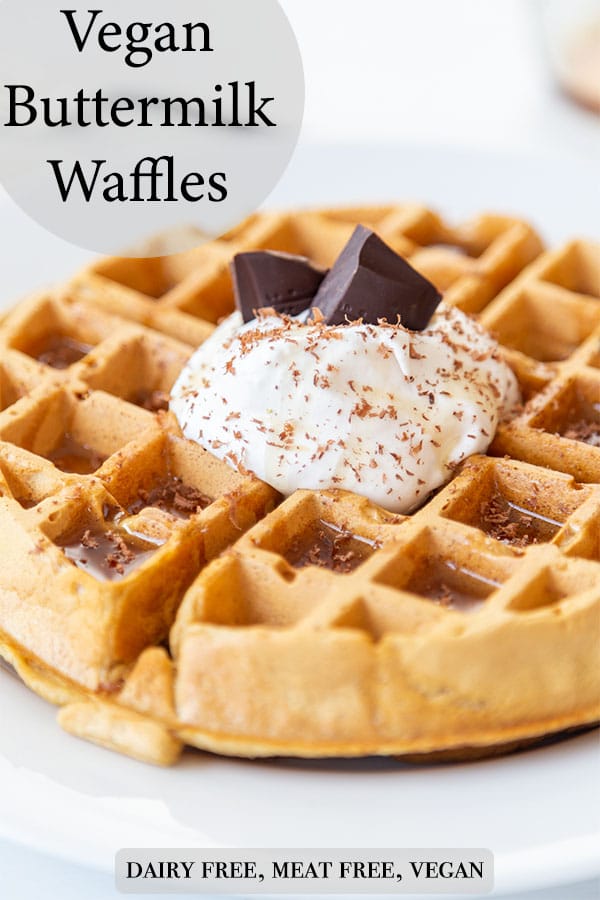 Make our vegan buttermilk waffles recipe and let us know what you think. We love to hear from you! And, please take a picture of your gorgeous creation and tag us @veganosity on Instagram.

And, remember to SUBSCRIBE to the blog so you never miss a recipe. Scroll below the recipe or in our side bar to become a Veganosity subscriber. 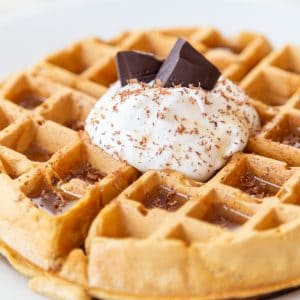 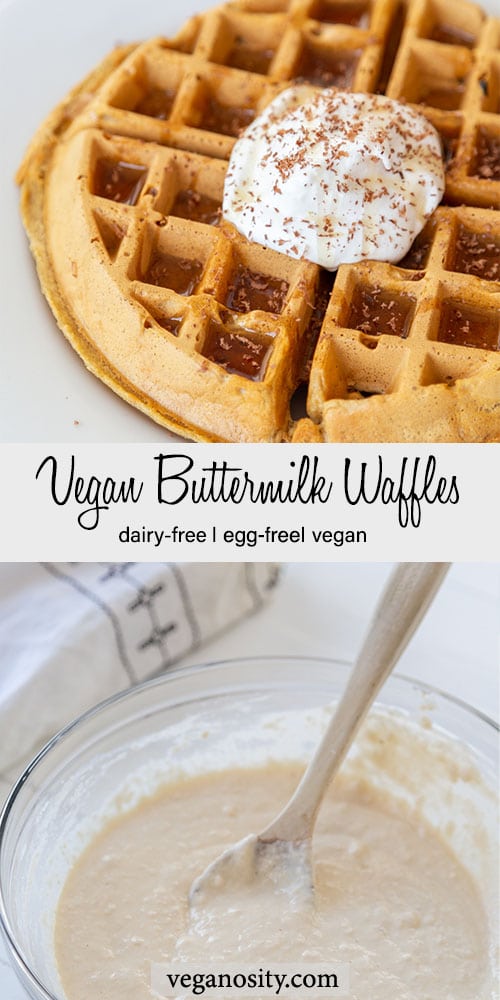