Our vegan strata is made just like the one we used to make before we went vegan, thanks to Vegan Egg and Beyond Meat Hot Italian Sausage. This eggy breakfast casserole is so delicious and satisfying, and you can prep it the night before for an easy Sunday morning brunch recipe.

WHAT IS THE BEST BREAKFAST CASSEROLE RECIPE?

We're so happy you asked. 😉

The best breakfast casserole is made with love, and kindness, and tons of flavor. Just like ours is.

It's made with love because we make it for the people who mean the world to us, our family and friends.

It's made with kindness because you won't find any animal products in this egg and sausage breakfast casserole. We used Vegan Egg and Beyond Meat Hot Italian Sausage, both taste so close to the real thing that they're scary. Scary good!

It's also packed with flavor. We made this vegan strata with onions, garlic, fresh herbs, bell pepper, and other incredibly good foods. 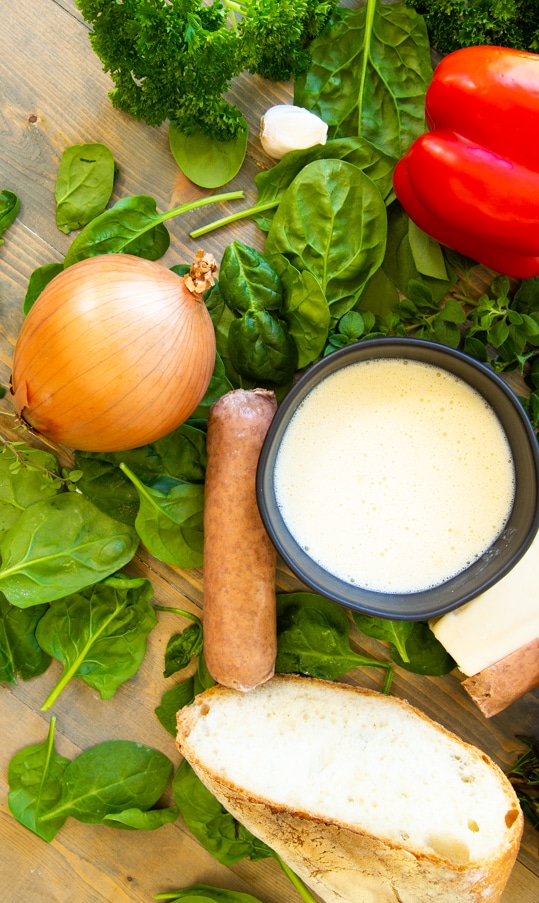 HOW TO MAKE A VEGAN BREAKFAST CASSEROLE

It may look fancy, but it's such a rustic and simple recipe to make. It requires a few steps, but they're all easy, so no worries.

2. Cook the vegan sausage slices and plate when done, then cook the vegetables in the same pan. This ensures that the veggies absorb the flavor of the sausage from the leftover fat in the pan.

Remove from the pan and set aside.

3. In the same pan that you cooked the sausage and veggies, wilt the spinach and then remove from the pan and coarsely chop it. This allows some of the excess water from the spinach to be

released on the cutting board instead of in the casserole, which would make it soggy. Put the chopped spinach on a paper towel to absorb even more water.

4. Now it's time to construct the strata. Butter a 13-inch round or a 13 x 8 oblong pan, 3-inches deep. Evenly layer the bottom of the pan with half of the cubed bread, sprinkle half of the

5. Pour the vegan egg mixture in a spiral pattern over the casserole to ensure total coverage and bake for approximately 30 minutes, or until the top is a golden brown. 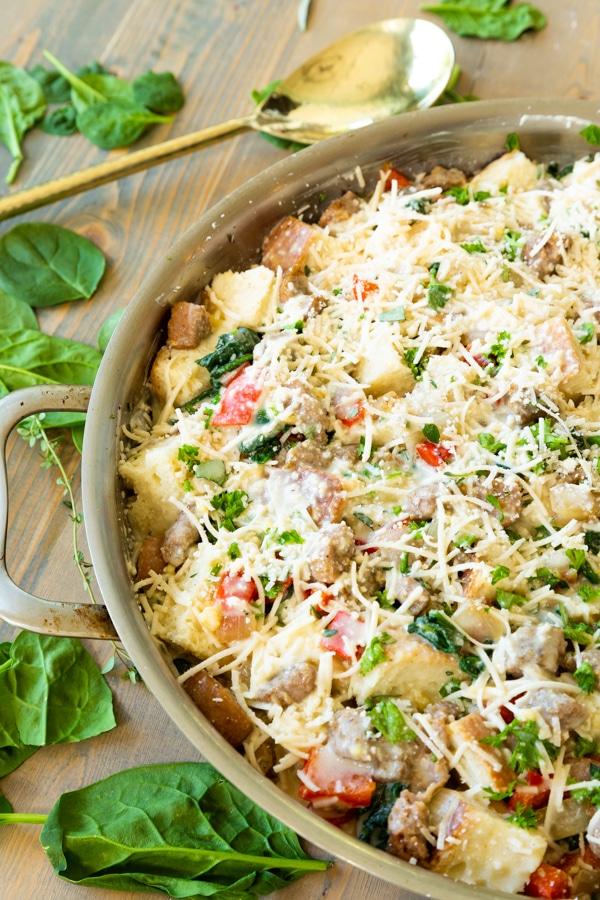 PREPARE THE VEGAN BREAKFAST CASSEROLE THE NIGHT BEFORE

You can prepare the vegan sausage and egg strata or casserole the night before. Just store it covered in the refrigerator and bake it in the morning. 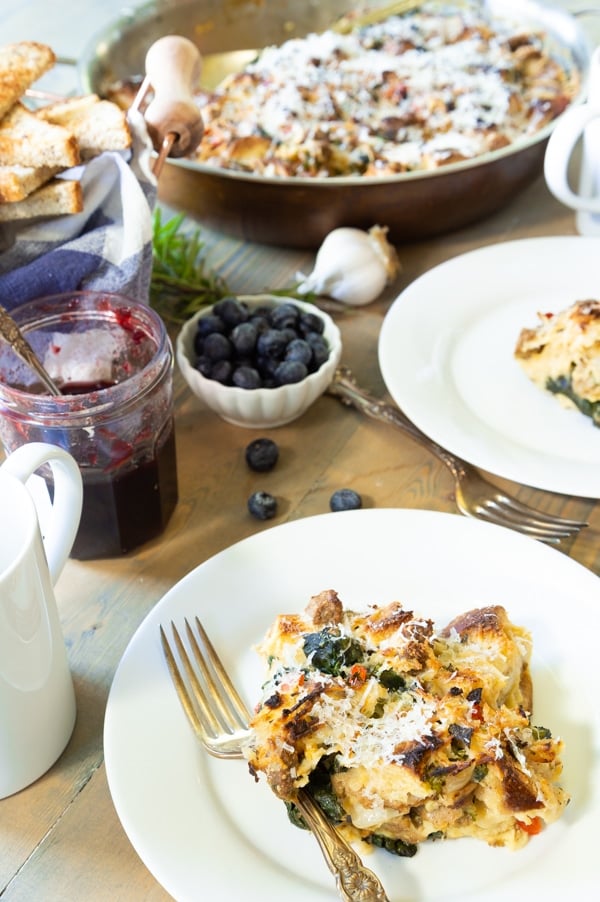 WHAT TO SERVE WITH A VEGAN BREAKFAST CASSEROLE

We love to serve this vegetable, sausage, and egg casserole with our Healthier Vegan Ambrosia Fruit Salad. Click here for the recipe.

If you're feeling really decadent, or you're serving a big crowd, our Homemade Vegan Cinnamon Rolls are always a welcome addition at the table. Click here for the recipe.

HOW TO STORE AND REHEAT A VEGAN BREAKFAST CASSEROLE

You can store it covered in the refrigerator for up to three days. Cover it in foil and reheat in a 350F oven for approximately 20 minutes or until heated through.

We haven't tried freezing this, but it should freeze well for up to three months, as long as it's stored in a freezer safe dish. 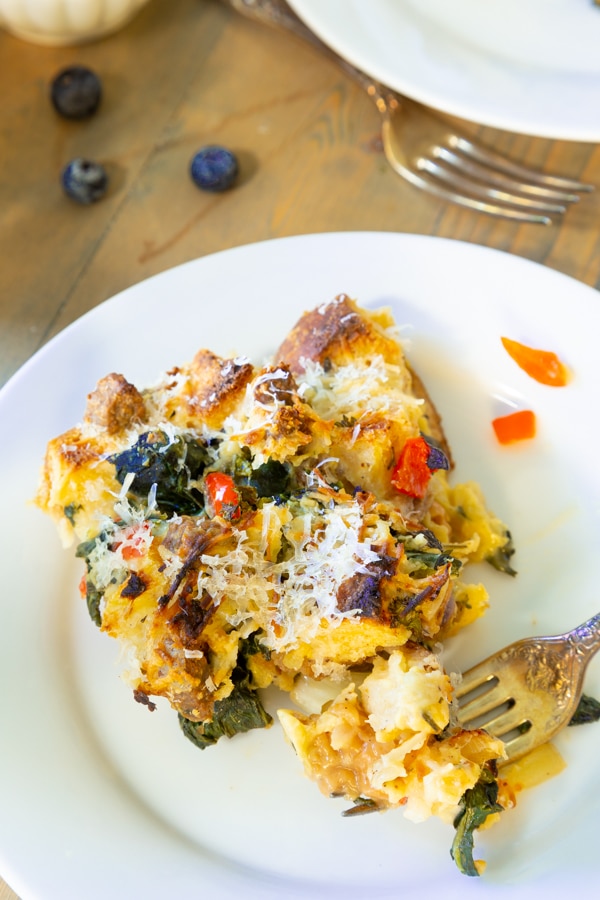 Make our vegan strata recipe and follow and tag us on Instagram @veganosity, #veganosity. We LOVE seeing your gorgeous creations. 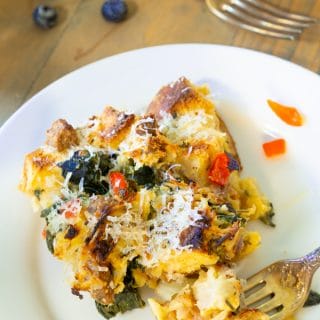 NUTRITION DISCLAIMER VEGAN EGG: We used Follow Your Heart Vegan Egg in this recipe. If you use JUST egg, you must OMIT the 2 ¾ water. That is to mix the powdered egg. For JUST egg, one egg equals 3 tablespoon of JUST. You will need 1 to 1 ½ cups of JUST egg to make this recipe, depending on how dry the bread is.  We haven't tried freezing this, but it should freeze well for up to 3 months in a freezer safe container. Reheat covered in a 350F oven for approximately 30 minutes, or until heated through. 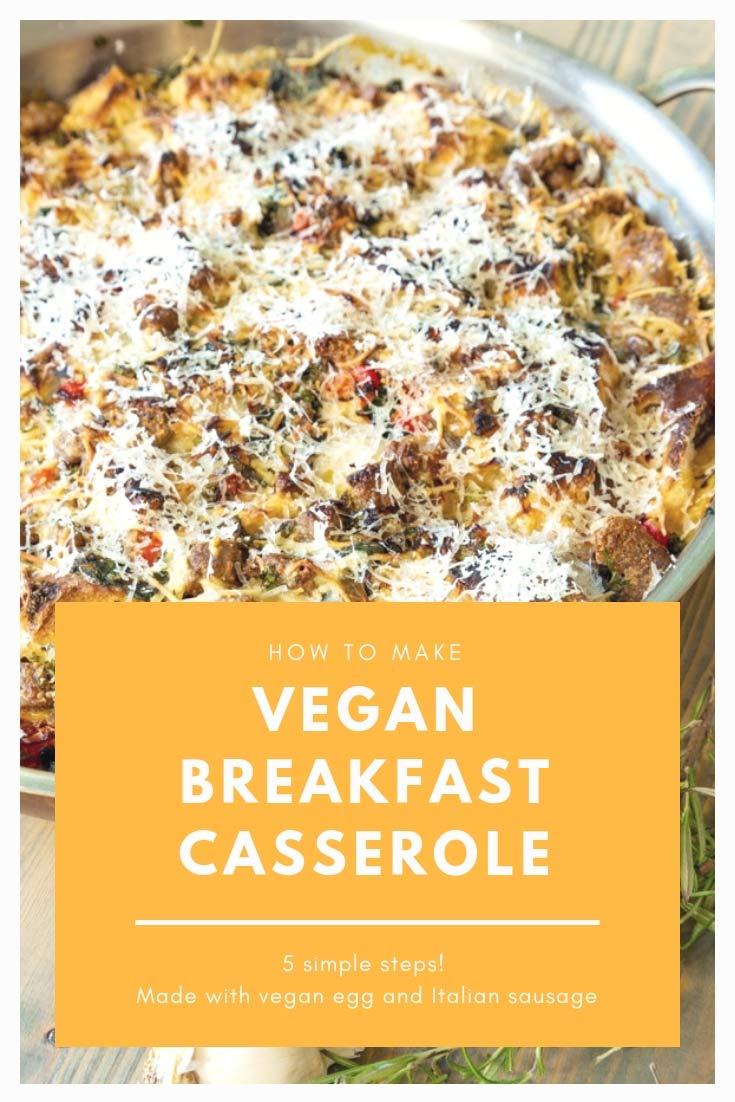 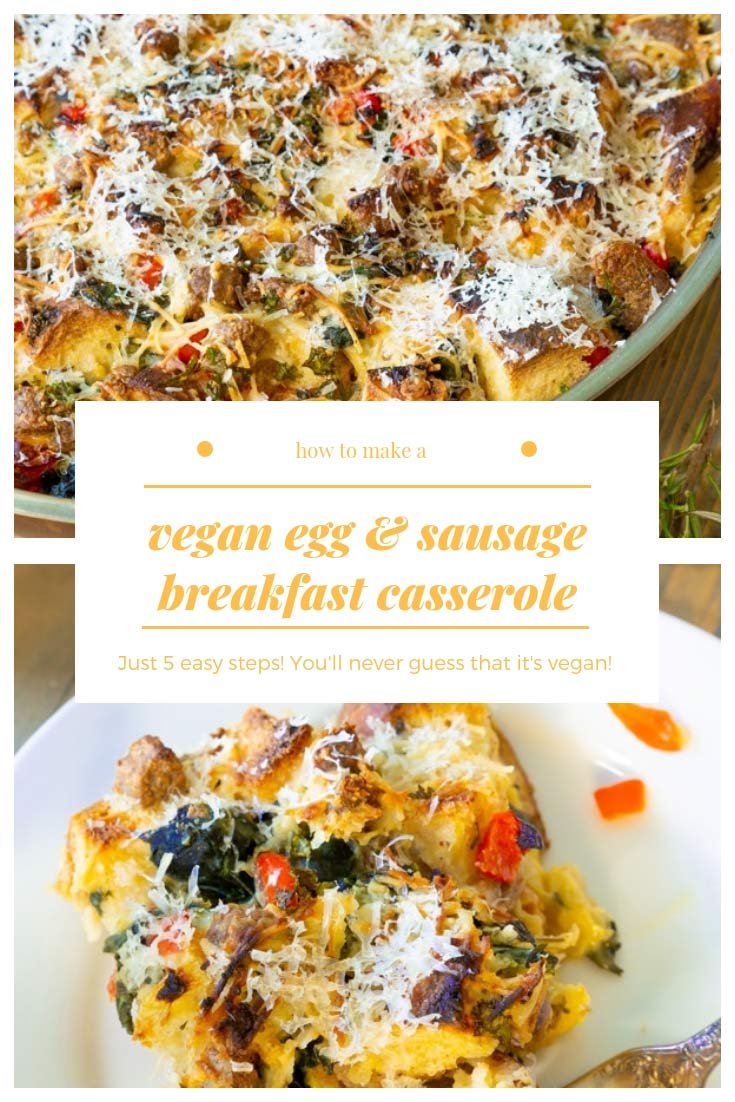