Homemade vegan cinnamon rolls are so worth the time to make. They're puffy, gooey, and so delicious! 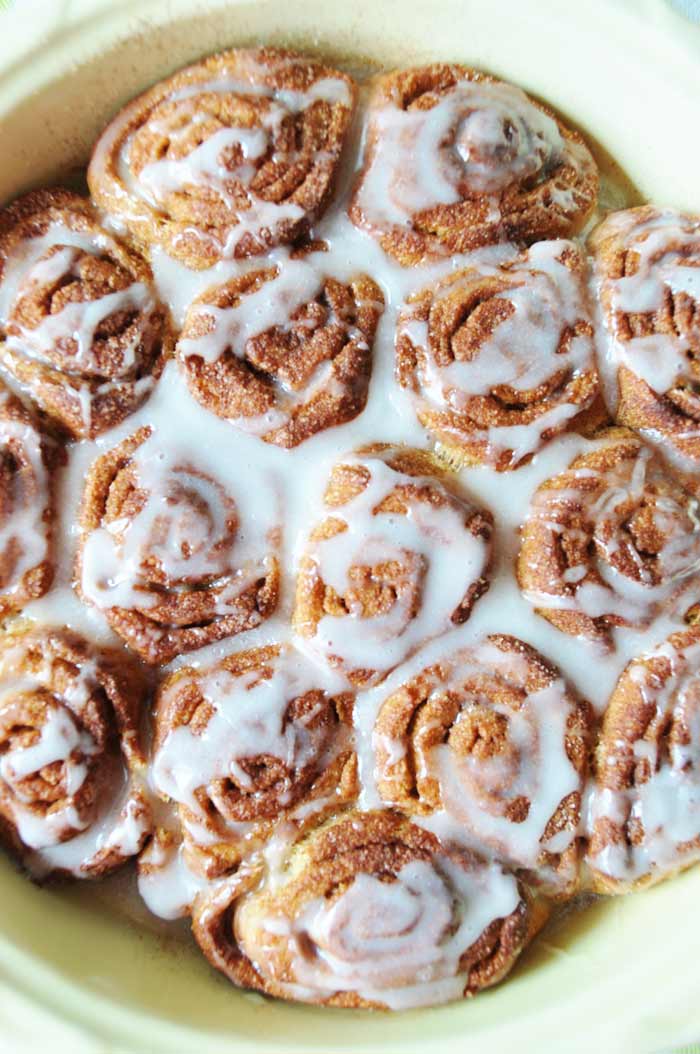 Sweet spirals of sugary goodness. These are what Sunday mornings are made of.

Everything about these homemade vegan cinnamon rolls whispers, slow down, have another cup of coffee, and enjoy the ones you’re with. That’s exactly what my guy and I did while making these pretty little things.

There is something so sexy about a man in a baseball cap making gooey cinnamon rolls in the morning. The only thing that could have made the scene better would have been watching him do pull ups while they were baking. But I digress.

These homemade vegan cinnamon rolls are what sweet dreams are made of. They’re not too sweet, and they’re just sweet enough. Unlike my man, who is really sweet, and funny, and charming, and as handsome as the glaze on this sweet roll. 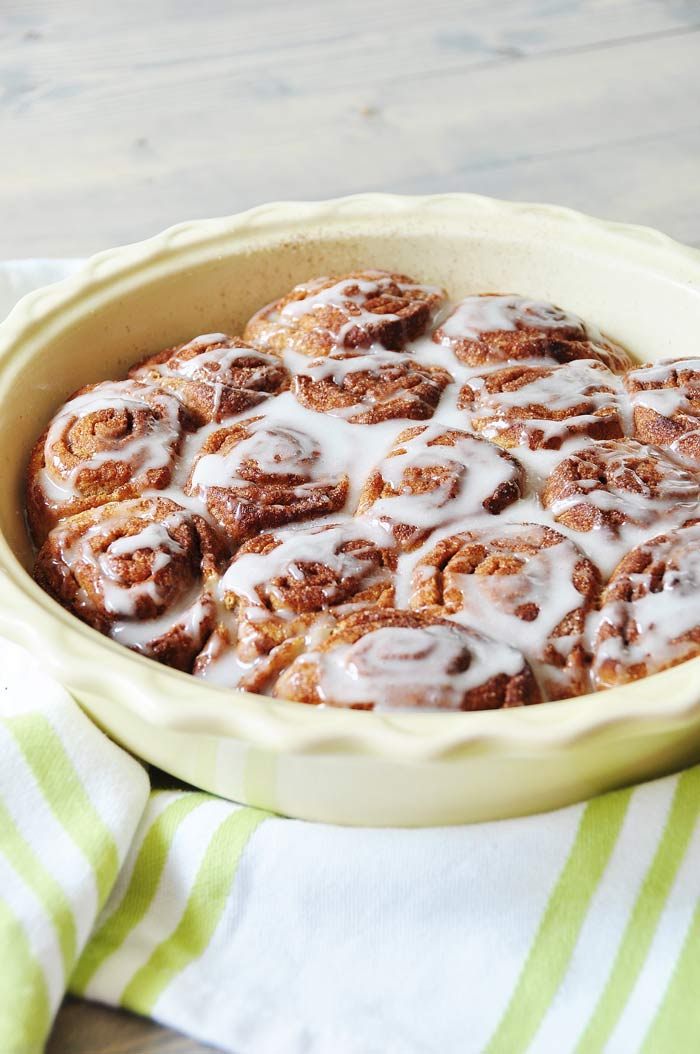 We had a lot of fun making our homemade vegan sweet rolls. While Mr. M whisked, kneaded, rolled, sliced, and drizzled, I clicked away with my camera. Some of the pictures didn’t turn out so great because the lighting in our kitchen isn’t optimal, but I did my best to edit them, so forgive the quality of the step by step photos.

Making homemade cinnamon rolls is a process. You need to set aside the time to make them, and Sunday mornings are perfect because you can slow it down and enjoy each step, and the smell of your kitchen as they bake up all puffy and warm.

Start with almond milk, vegan butter or coconut butter, and a package of active dry yeast.

You need to use active dry for this to work, instant active or rapid rise will not give you the best results. Warm the milk and butter to one hundred to one hundred and ten degrees (don’t overheat or you’ll kill the yeast).

When the butter is completely dissolved whisk the yeast into the milk, then the sugar and salt, and keep whisking until it begins to foam. This will take approximately five to ten minutes.

Now pour the milk and yeast mixture in a large bowl and stir the flour into the mixture until it turns into a ball. Knead it a bit and then cover it and let it rise for about thirty minutes. While you’re waiting for the dough to rise have another cup of coffee, read the paper, or find another entertaining activity to keep you occupied 😉

The dough has risen! Let the fun begin.

Roll the dough on a non-stick surface until it's about a quarter of an inch thick and liberally sprinkle with cinnamon sugar. 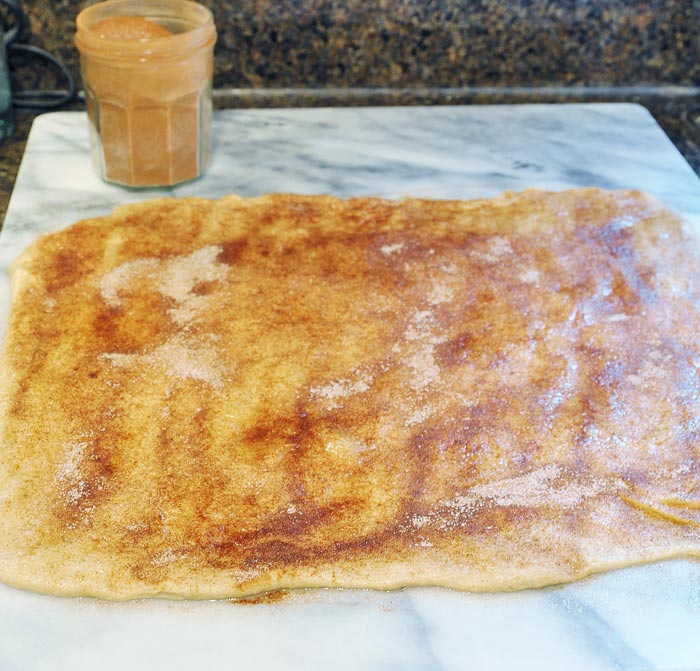 Roll the long side of the dough up like this. 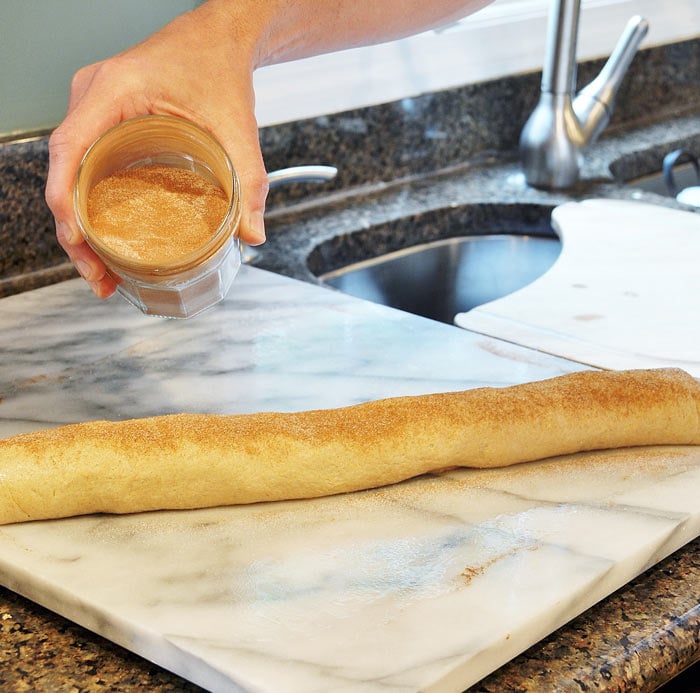 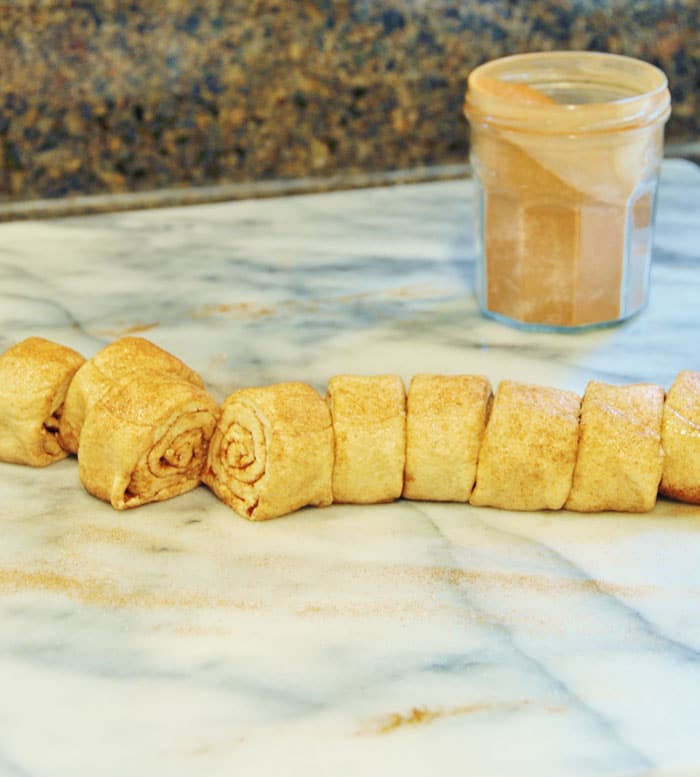 Arrange all nice and pretty in a pie or cake pan. 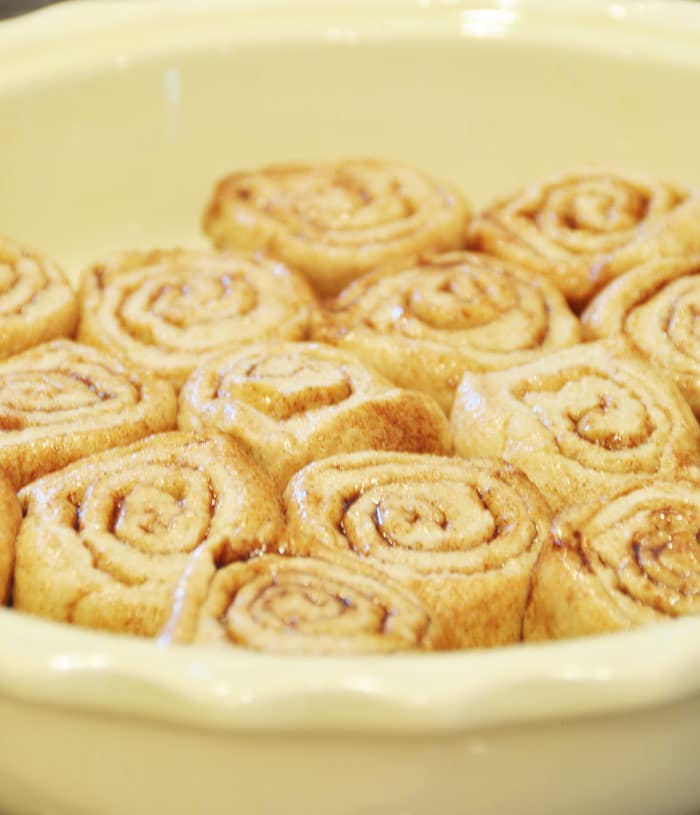 Roll it, butter and sugar it, roll it again, sprinkle it, slice it, lay it, bake it, glaze it, and eat it. Rinse and repeat. JK, don’t rinse and repeat. 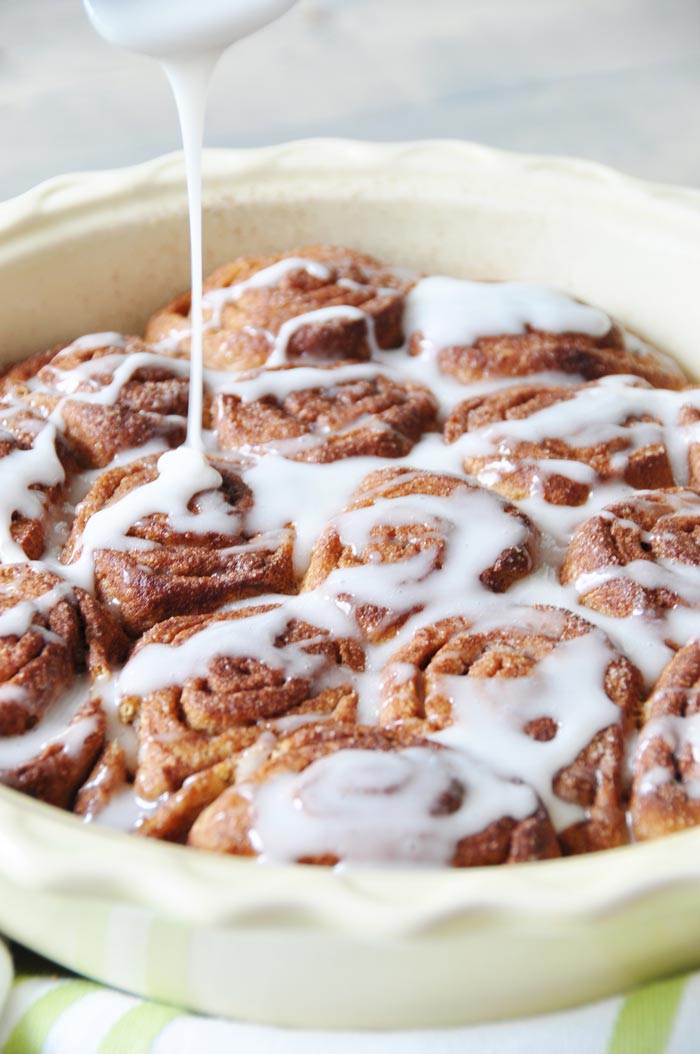 These are going to rock your morning. I promise. 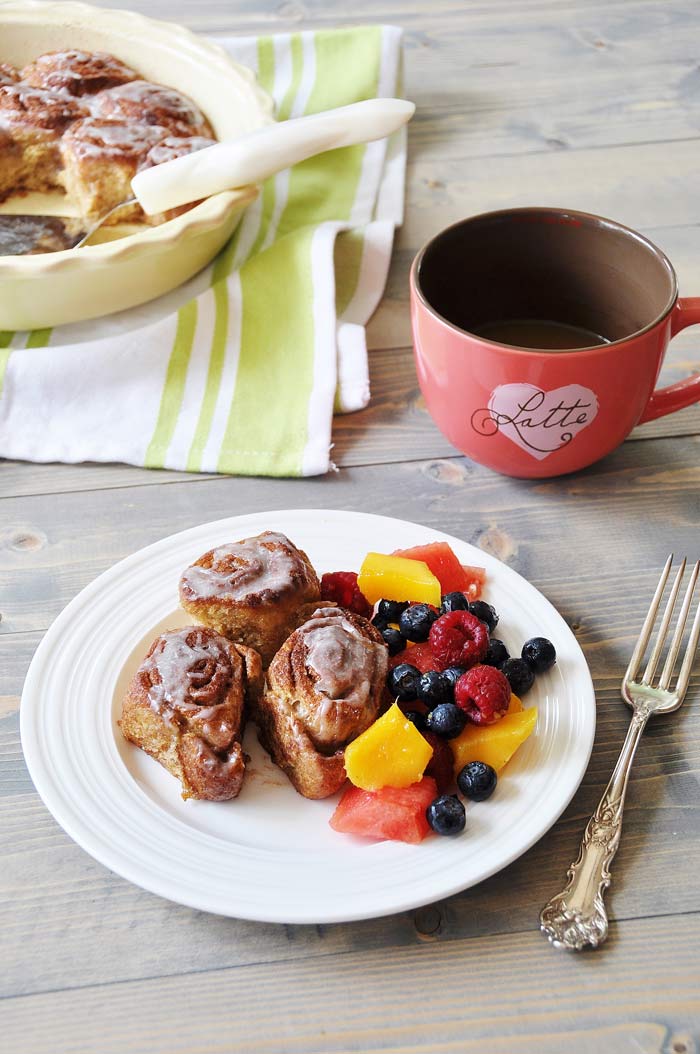 Homemade vegan cinnamon rolls are part of our Christmas morning brunch. I know, I know, I’ve been holding both of my arms out and digging my heels in to hold fall back, so what the heck am I doing mentioning Christmas?

I’m a preparer, a planner, a traditionalist, and I want you to pin this recipe for later so that you can make them for your holiday brunch. And don’t think that you have to do all of this work the morning of, because you don’t.

CAN YOU PREPARE CINNAMON ROLLS THE NIGHT BEFORE BAKING THEM?

You can put the rolls in the refrigerator overnight and bake them in the morning. Sweet!

But don’t wait until December to make these. Take them for a test run this weekend and come back and let me know what you thought. 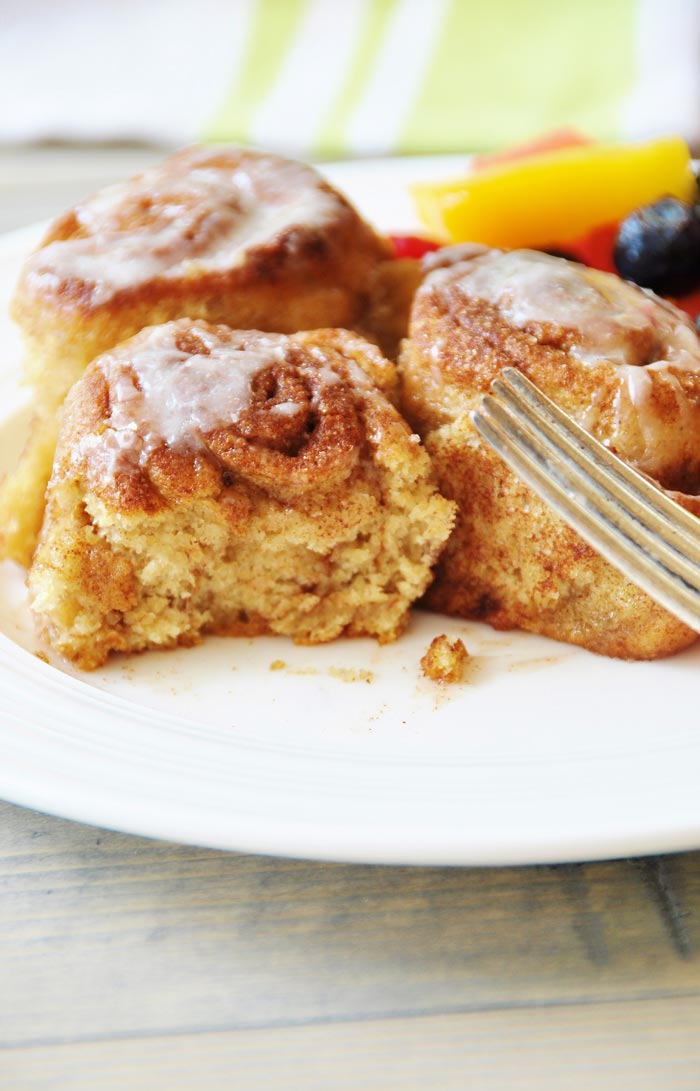 DO YOU WANT TO GO VEGAN BUT DON'T KNOW HOW? 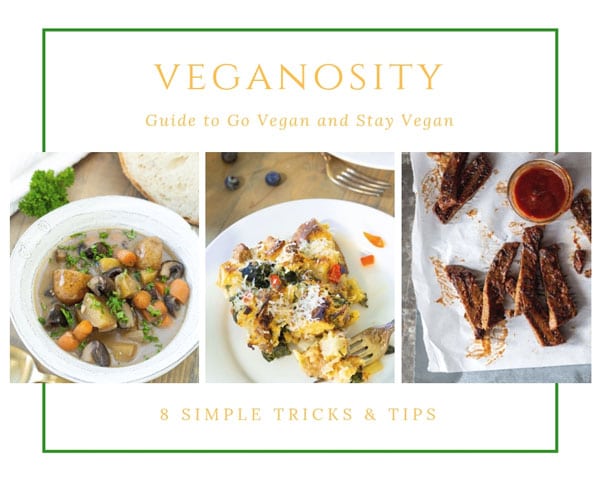 We've created a FREE 8 Day Vegan Starter Kit with tips and tricks to help you go and stay vegan. Just subscribe to our weekly Newsletter to get it.

Are you ready for fall or do you want more summer?

Have you ever made cinnamon rolls from scratch?

Do you love watching a man cook as much as I do? 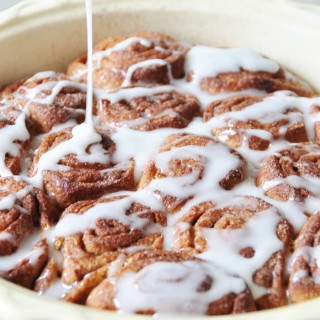 The Nutrition Facts are an Estimate only.