The best Southern vegan strawberry pecan waffles are made with love, and fresh strawberries and toasted pecans. These crispy on the outside and chewy on the inside waffles are dairy-free and egg-free, and they’re super easy to make. Serve them for breakfast or a Sunday brunch with our tofu bacon or vegan sausage patties. 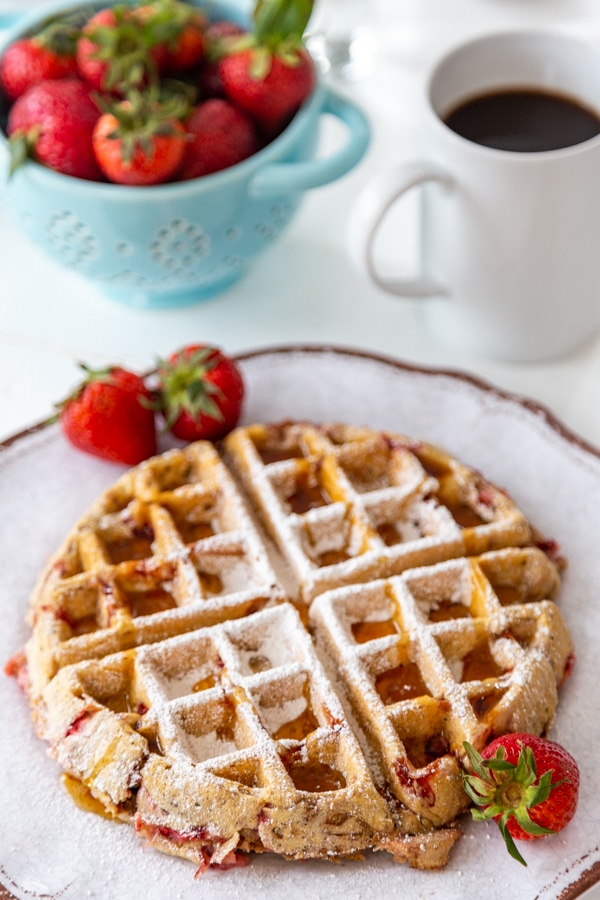 What’s better than a Belgian waffle that’s as big as your head, smothered with maple syrup and sprinkled with powdered sugar? Nothing.

Okay, that’s a bit of hyperbole, but seriously, when it comes to vegan breakfast food, this is a winner.

These Southern style waffles are inspired by the yearly summer road trips my family took to the Carolinas when I was a kid.

Every trip included several stops at a Waffle House for the best crispy waffles ever!

What Makes Them Vegan?

When you swap out dairy milk for plant-based milk and vegan egg replacement for chicken eggs, you can make the best waffles ever.

For this recipe you can use sweetened or unsweetened plant milk.

Almond, cashew, pea, oat, or soy are all great alternatives. The only kind we don’t recommend is coconut, because it adds a different flavor.

To swap out the chicken eggs for this recipe, we used a banana.

Yep, banana is a great egg substitute for baked goods, pancakes, and waffles.

Can you use a flax egg, applesauce, or store-bought vegan egg substitutes? Yes, that’s fine, but why complicate things? Bananas are easy. 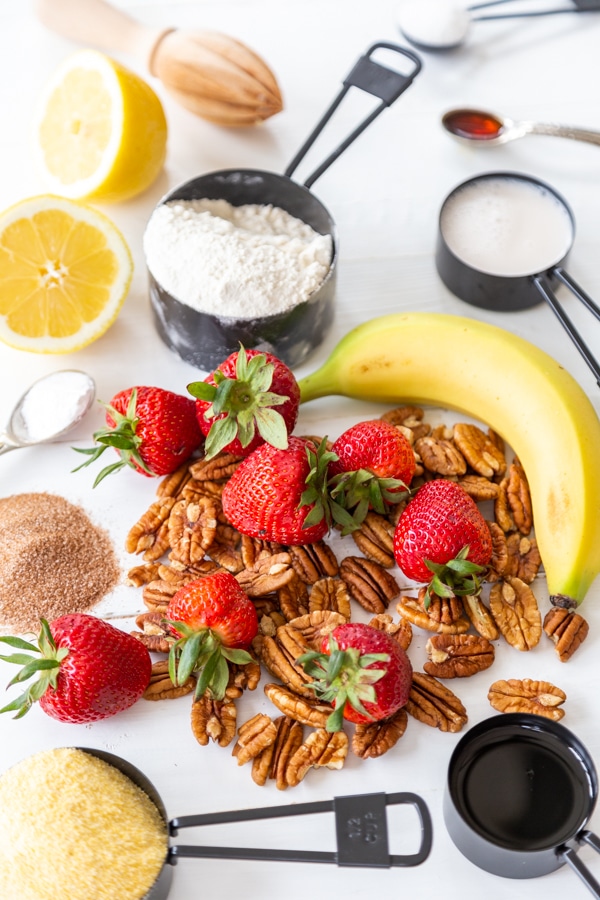 How to Make Them

The first thing you’ll want to do is toast the pecans.

Toasting nuts brings out the oil in them, which makes them more flavorful and crispy.

Feel free to coarsely chop them once they’re cool. 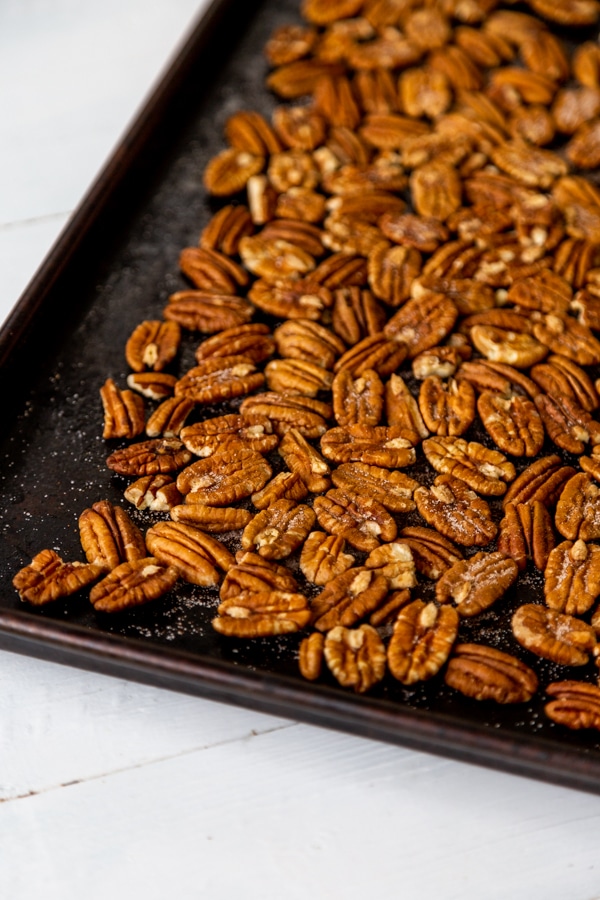 Wash and pat dry the strawberries and remove the stems.

We like to chop them into smaller pieces, but if you like them larger, then feel free to thinly slice them. 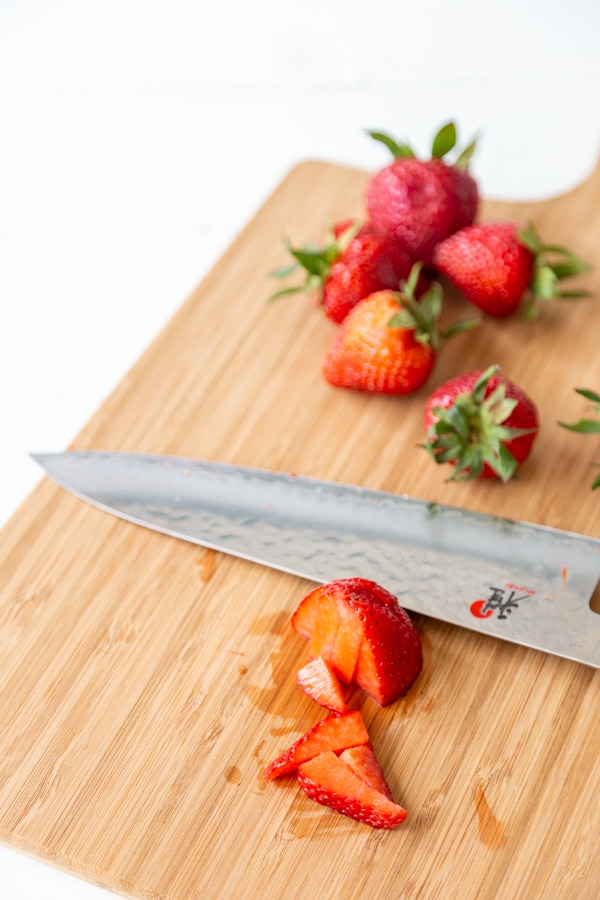 Some waffle recipes that use bananas as the egg replacer will tell you to mash them. We say no.

Put the banana in a mixer, food processor or blender and puree it with the other wet ingredients until it looks like baby food.

This will ensure that you won’t have large pieces of the banana fighting with the strawberries.

Whisk the dry ingredients together in a large bowl and then stir in the wet ingredients until just combined.

Now, fold in the pecans and the strawberries.

Don’t overdo it or the waffles will be tough.

Fill the preheated waffle iron with the batter.

You want to fill the pockets of the iron and just cover the top.

Cook the waffle until it stops steaming, approximately 5 minutes. 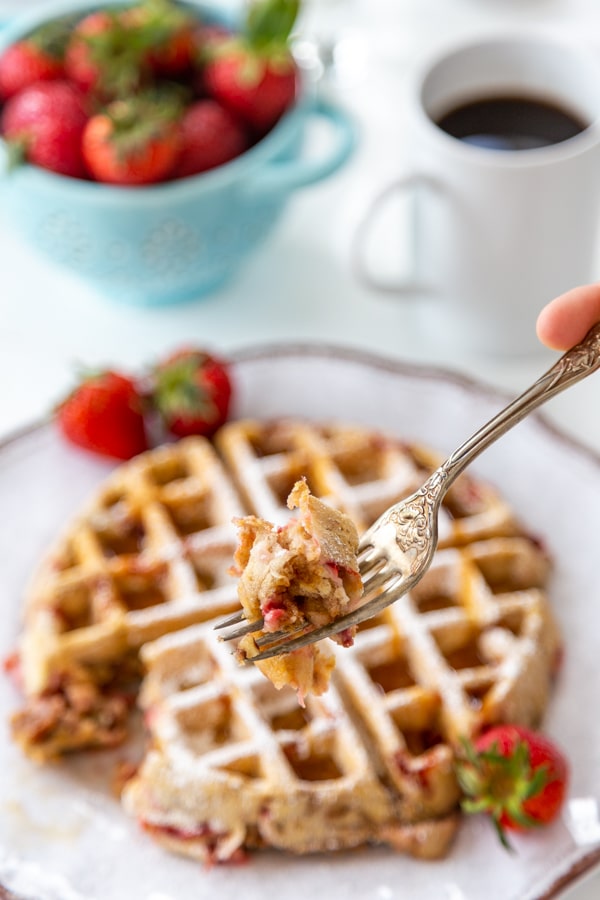 How to Serve Them

These are the best toppings for waffles:

A pat of vegan butter 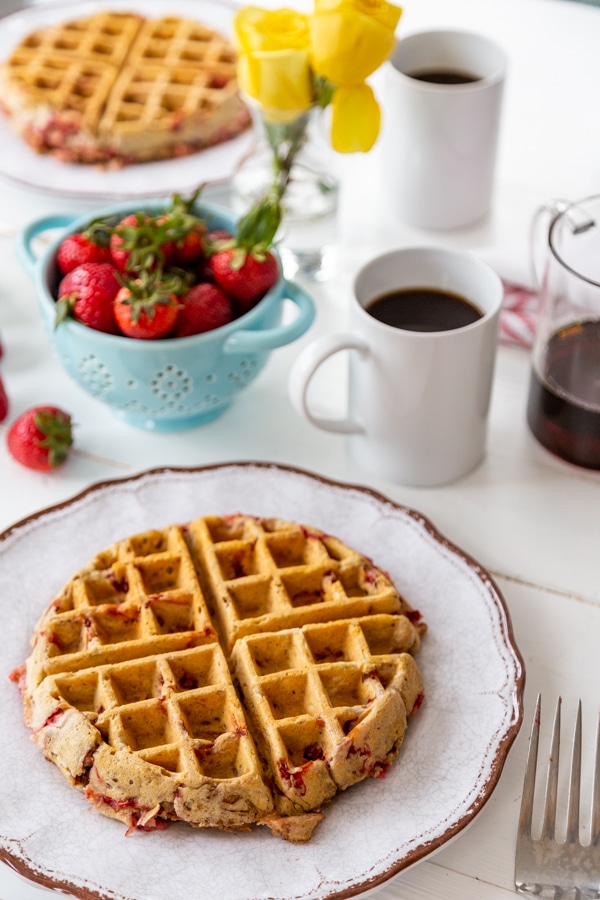 Make our vegan strawberry pecan waffle recipe and let us know what you think. We love to hear from you! And, don’t forget to take a picture of your gorgeous creation and tag us @veganosity on Instagram. 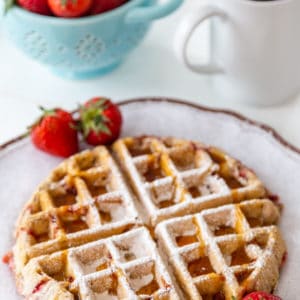 NUTRITION DISCLAIMER PRO TIPS Don’t over mix the batter or the gluten in the flour will make the waffles tough. Blend the banana so it’s pureed and smooth. This makes a better egg replacer. Preheat the waffle iron completely. Brush a thin layer of oil over the top and get into the pockets of the iron so they don’t stick. Cook the waffles until the steam stops coming out of the sides of the waffle iron.