Our homemade vegan corned beef and Russian dressing are easy to make and taste so much like the real thing. They make an incredible Reuben sandwich for ♣ St. Patrick's Day,♣ or anytime you get a craving for this decadent sandwich.

The last time I had a Reuben sandwich, made with corned beef, was approximately thirty years ago. I’m not going to lie, St. Patrick’s Day was never the same after that. It was still fun, green beer was (notice the use of past tense) the focal point of that holiday, but boy did I miss that sandwich.

Fast forward twenty-eight years, and thank you Chicago Diner, I sank my teeth into a vegan Reuben that was so miraculously delicious and so similar to what I remembered, I almost cried. No, not really, I’m not that food obsessed, but I did get a little rush of excitement.

Now, I know that most of our readers don’t live in or near Chicago so they can try the Reuben at the Chicago Diner for themselves, however, if you ever get the chance, you must! Also, because most of our readers probably don’t live near restaurants that are so progressive that they offer vegan corned beef, we know that some of them must be feeling very deprived when St. Patrick’s Day rolls around.

Feel deprived no longer, my friends, for we have created vegan corned beef that’s so freaking delicious that you can get your Reuben on whenever you want to. Cue the cartwheels!!

After writing our cookbook, GREAT VEGAN BBQ WITHOUT A GRILL, we became well versed in making seitan meats. I couldn’t even count how many bags of vital wheat gluten we went through as we perfected our vegan ribs, brisket, and pulled BBQ. We should have invested in Bob’s Red Mill before writing the book. LOL!

As we worked to get the flavors and textures just right, we really started to enjoy the creativity of this side of vegan cooking, so it was a no-brainer to try and come up with vegan corned beef.

The secret to getting the right flavor for any seitan meat is the spices and the umami ingredients, such as vegan Worcestershire sauce, tamari, and often times mushrooms. The texture is a little trickier. It took us multiple tries for every recipe. We weren’t about to compromise.

It had been a while since I busted out the vital wheat gluten, and then March started creeping up, and my cravings for Reuben sandwiches got real. It was time to start playing kitchen scientist and create a drool worthy vegan corned beef made with seitan and homemade Russian dressing for all of our vegan friends. Although, non-vegans will love this too.

All right, now that you have the back story, let’s make some!

HOW TO MAKE VEGAN CORNED BEEF

First – In a medium mixing bowl, whisk all of the dry ingredients together. Corned beef is flavored with coriander, ginger, allspice, cloves, cinnamon, and dry yellow mustard. Don’t skimp on the spices or you’ll taste the wheat gluten.

Second – Juice the beet in your blender and add the vegan Worcestershire sauce, tamari, and tomato paste. These are the umami flavors that are required for any meaty dish.

Third – Stir the liquid mixture into the dry and keep stirring until it forms a stretchy ball. Then, knead it for about two minutes. It will feel like silly putty.

Fifth – Bake the seitan for 50 minutes and then take it out of the oven and let it rest for 15 minutes. Unroll it and when it’s cool enough to handle, thinly slice it with a mandoline or a box grater. If you don’t have either one of those, shred it with a knife.

Just writing this is making me incredibly hungry. Granted, this is not the healthiest of sandwiches because of the creamy dressing and the cheese and butter, but it’s still a heck of a lot better than the kind made with dairy and meat. Besides, it’s a once a year treat, and a girl has got to live!

In case you’re wondering about the Russian dressing, it’s a must for a true Reuben. Our recipe is so spot on. We made it with Just Mayo (it’s vegan), horseradish, vegan Worcestershire, ketchup, and salt and pepper. It may sound weird but trust us when we say it’s pretty darn awesome.

Make our vegan corned beef and Russian dressing and then make vegan Reuben sandwiches for your family. Make sure to come back and let us know what you think and take a picture and tag us @veganosity on Instagram. We love seeing your gorgeous creations.

FOR THE RUSSIAN DRESSING

TO MAKE THE REUBEN SANDWICH

The brand of cheese you use can vary in melting times. If the cheese doesn’t melt the way you want it too, place the sandwich on a baking pan and in a 350°F (176°C) oven for a few minutes until it melts. The Nutrition Facts are an estimate only. 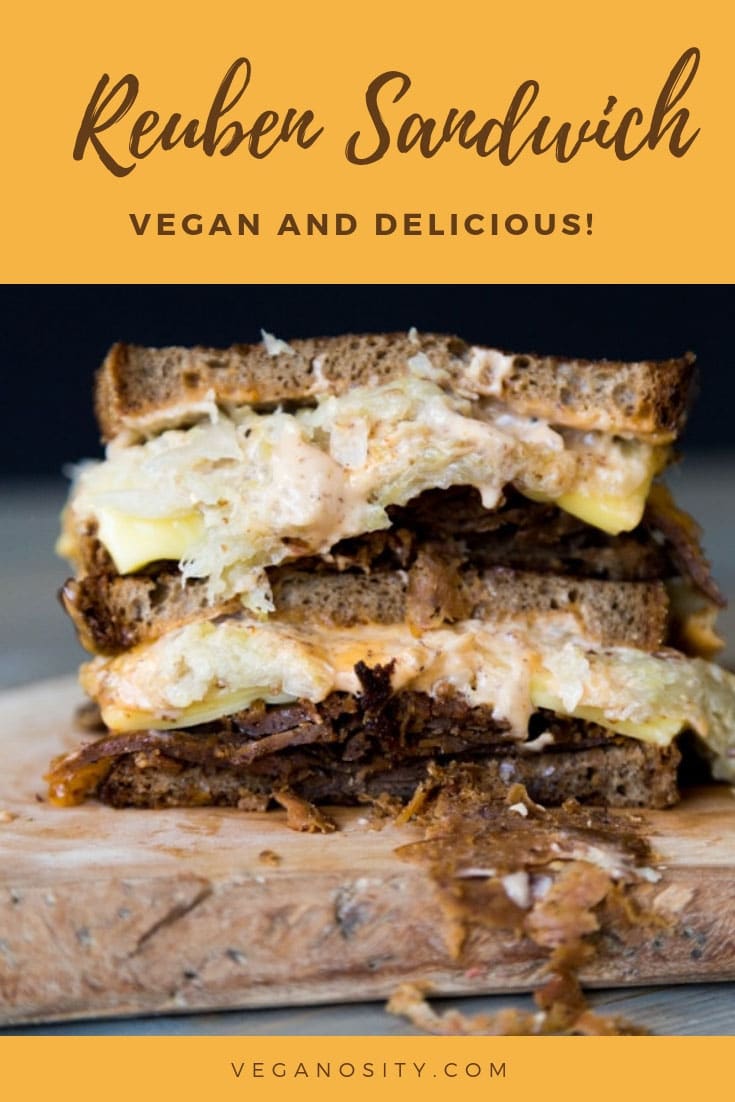 1499shares
Healthy vegan recipes that will keep you strong, fit, and satisfied.