Our crispy vegan cauliflower chicken recipe is a tender, crunchy, easy, and delicious way to enjoy oven fried chicken without the actual meat. This is a great option for you if you don’t eat gluten, because you can make it gluten-free. Serve it with our tender homemade vegan buttermilk waffles for the best chicken & waffles recipe ever! Breaded oven fried cauliflower is a great plant-based alternative to fried chicken. 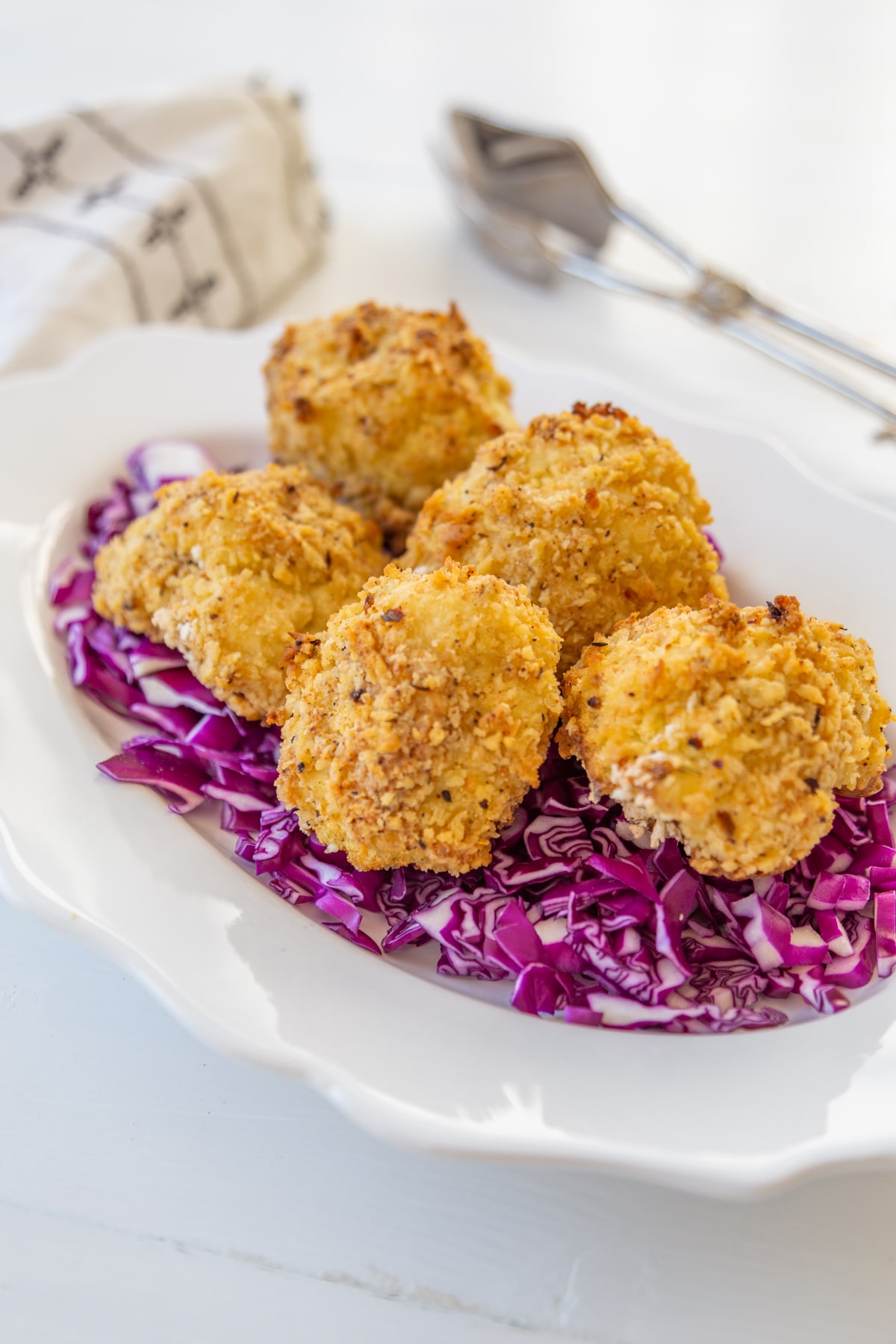 Cauliflower is such a mild flavored vegetable, so when you add seasoning to it, you can make it taste like chicken.

This crispy baked cauliflower recipe is so easy to make. We know you’re going to love it as much as we do.

How to Make Breaded Cauliflower

To make our crispy vegan cauliflower chicken, start by cutting the cauliflower in half from the top through the stem. 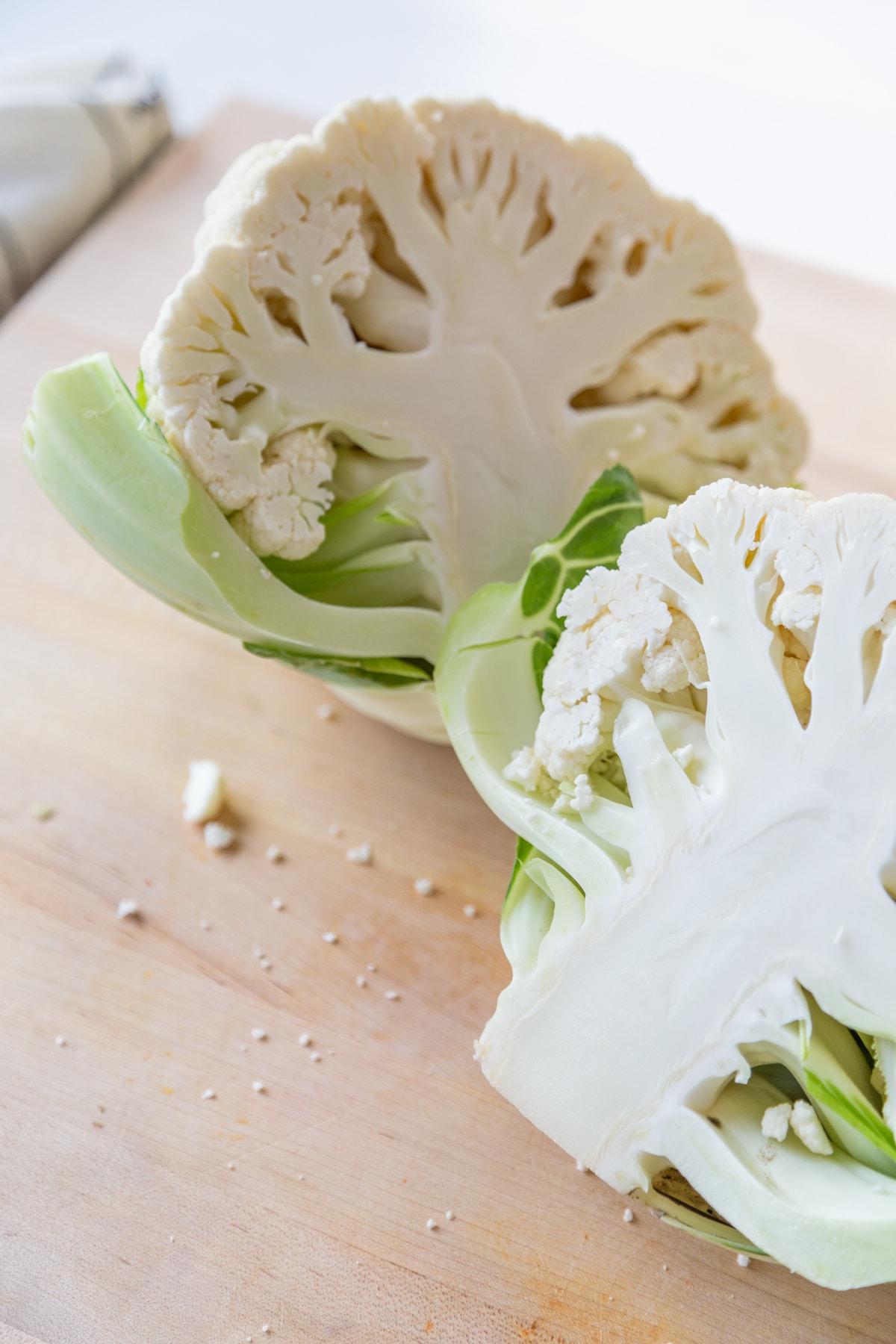 Remove the core and the leaves from each half.

Slice or break off the florets. If they're too large, cut the florets in half. 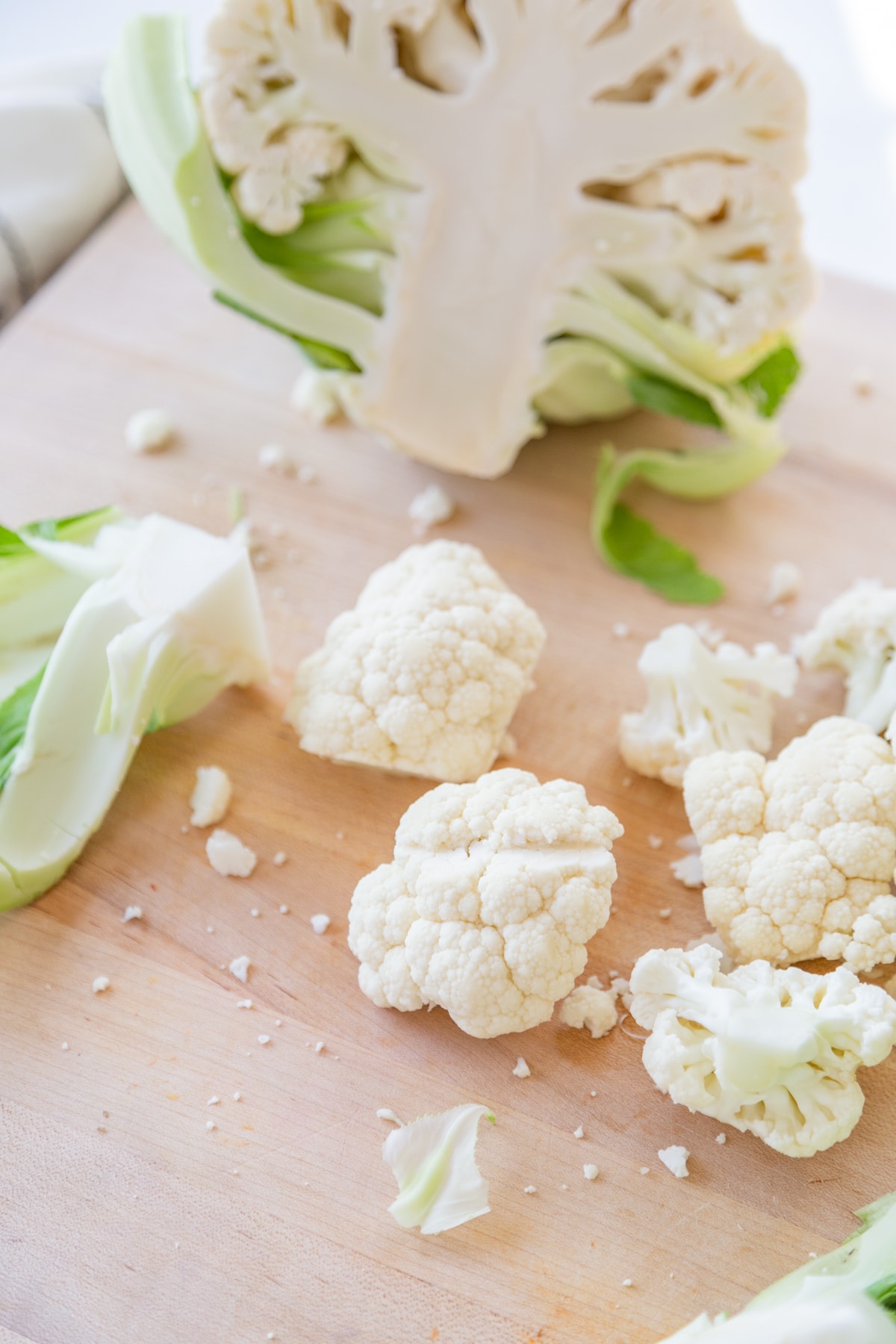 In a medium bowl, whisk the flour, thyme, oregano, and salt and pepper to taste until they’re completely combined.

Take another medium bowl, whisk the panko breadcrumbs with the chicken seasoning.

In a third medium bowl, whisk the vegan egg and milk together until combined. You can use milk only, but we think the egg helps bind the dry ingredients.

Place on a cookie sheet spaced apart so they don’t touch.

Repeat with the remaining cauliflower florets.

They should be golden and crispy all the way around.

Depending on the size of the cauliflower, you may need to whip up more flour and breadcrumb mixtures.

You can omit the vegan egg, just know that it may not stick as well.

Make sure that the oven is fully preheated before adding the cauliflower to the oven.

Flip the cauliflower after 15 minutes so all sides become golden and crispy.

How to Make it Gluten-Free and Oil-Free

Replace the flour with cornstarch or gluten-free all-purpose flour and gluten-free breadcrumbs.

Skip the oil, just know that they probably won’t crisp up and the color won’t be as golden if you do.

Spraying a light coating of vegetable oil on them adds a minimal amount of oil and calories.

How to Serve Baked Cauliflower

Serve them just like you’d serve oven fried chicken. They’re great as a main, in a sandwich, in tacos, or as an appetizer. 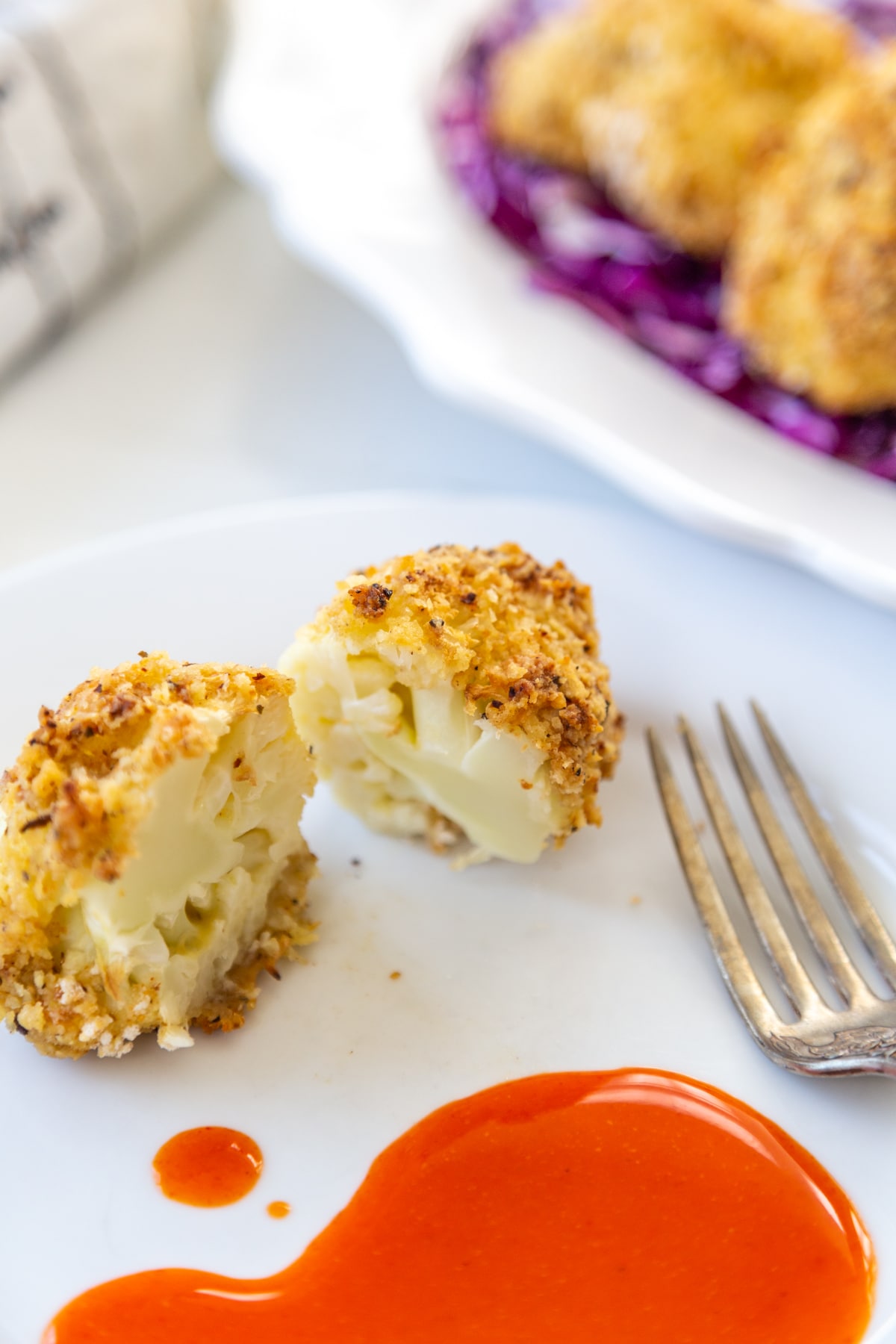 What to Serve with Oven Fried Cauliflower 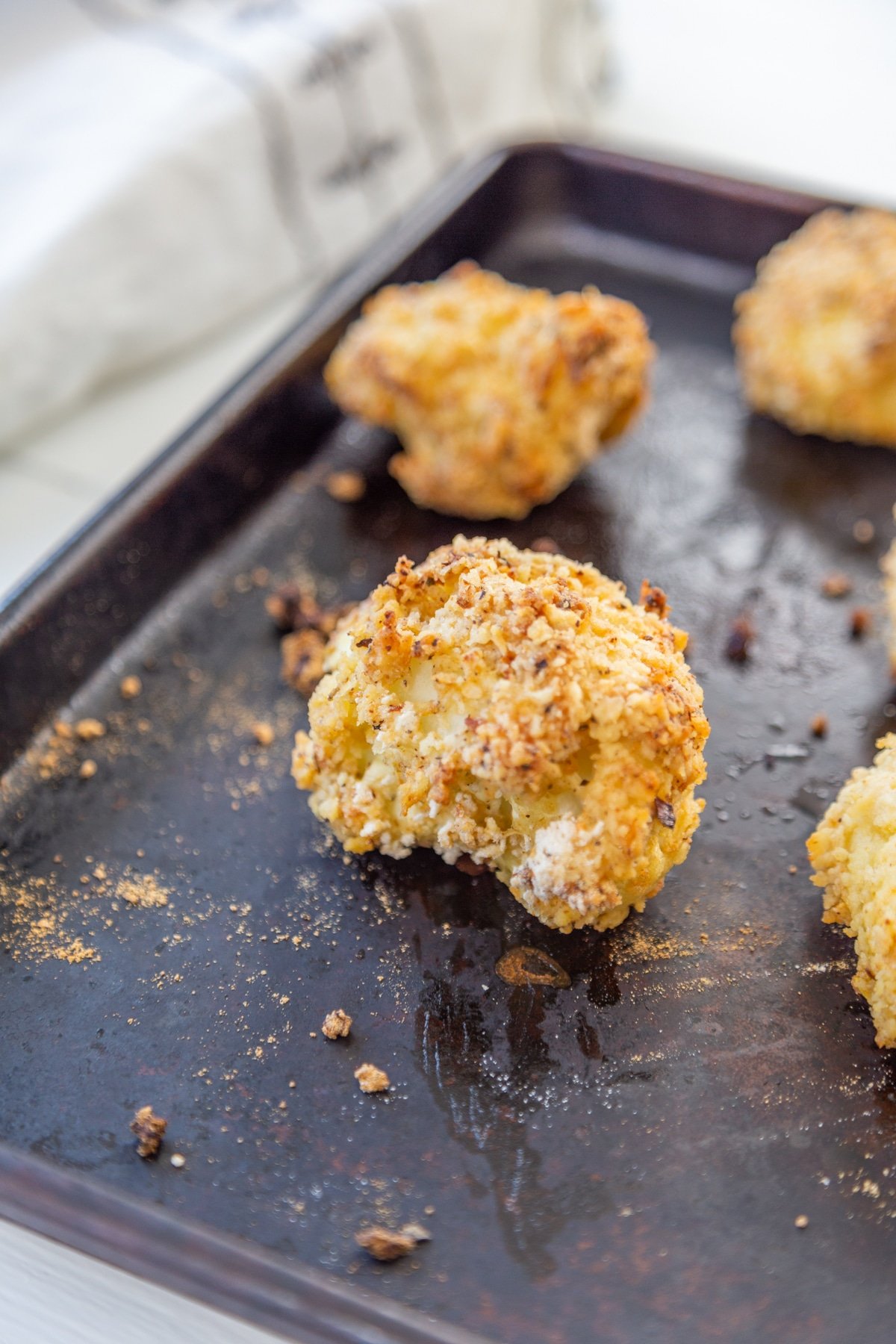 Make our crispy vegan cauliflower chicken recipe and let us know what you think. We love to hear from you! And, don’t forget to take a picture of your gorgeous creation and tag us @veganosity on Instagram. 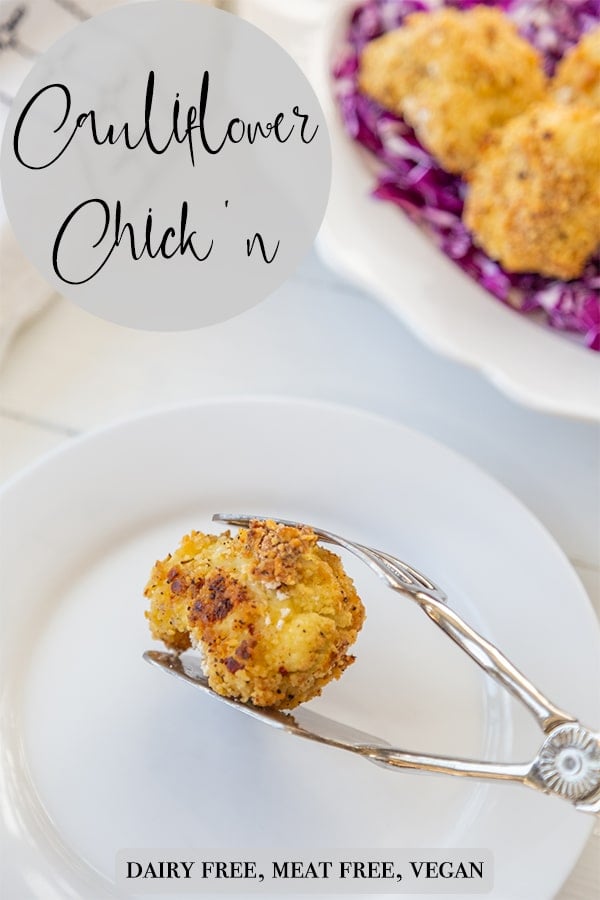 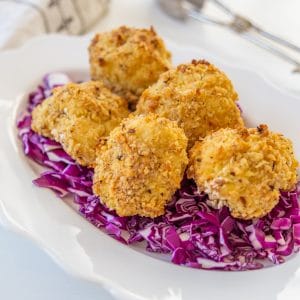 NUTRITION DISCLAIMER Use JUST egg or Follow Your Heart Vegan Egg and follow the directions on the box for 3 tbsp. To make this recipe gluten-free, replace the flour with cornstarch or gluten-free all-purpose flour. Replace the breadcrumbs with gluten-free breadcrumbs. To make this oil-free, omit the oil, just know that they won’t turn out as crispy and the color won’t be as golden. 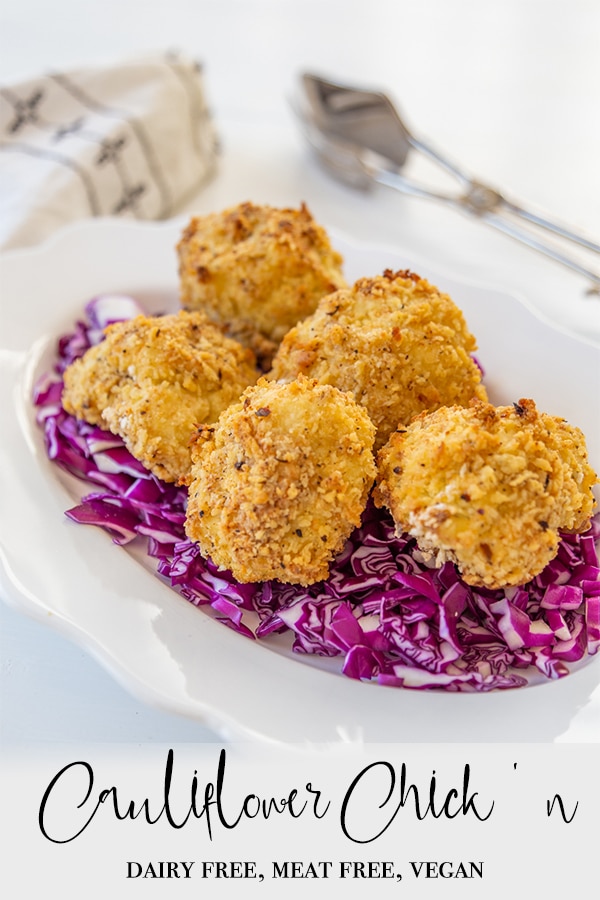