You won't believe how crunchy, smoky, salty and easy our vegan coconut bacon recipe is! Made with just 4 simple ingredients and in less than 10 minutes.

If you're looking for something that mimics bacon, then this faux bacon is going to quickly become one of your favorite vegan recipes.

This recipe was inspired by Phoney Baloney Coconut Bacon, which unfortunately closed its doors. Luckily, it's so easy to make your own!

Sprinkle some on top of our Smoky Vegan Corn and Potato Chowder, or add it to our Crispy Roasted Balsamic Brussels Sprouts recipe to add a smoky and crunchy element.

You only need 4 simple ingredients to make this quick and easy vegan bacon recipe.

See the recipe card for quantities.

How to Make It

HINT: Line the baking sheet with parchment paper to prevent sticking and for easy cleanup.

OIL-FREE - This recipe is oil-free, so it's a great vegan substitute for bacon if you don't consume oil.

GLUTEN-FREE - Because the liquid smoke doesn't contain gluten, and we don't use soy sauce in this recipe, it's completely gluten-free.

What is liquid smoke and is it healthy ?

Liquid smoke is the water vapor from smoke that's captured in a cooled tube and then distilled and condensed. The tar and ash are removed during the process, so it's supposedly better than eating food that's charred on a grill or smoked in a smoker.

What can I use instead of liquid smoke?

You can use smoked paprika, although the flavor won't be the same.

What is the best vegan bacon?

That really depends on the individual. We love this coconut bacon, as well as Tofu Bacon and Portobello Mushroom Bacon.

Although this isn't exactly like real bacon, it has the salty and smoky components that make it so delicious.

How do vegans replace bacon?

With recipes like this one and those that mimic the salty and smoky flavors of bacon. Vegan bacon recipes can be made with coconut, seitan, tempeh, mushrooms, tofu, or rice paper.

Store coconut bacon in an airtight container in the refrigerator for up to 10 days.

Can I freeze it?

Yes. Freeze in a freezer safe container for up to 3 months. Thaw in the refrigerator before serving. 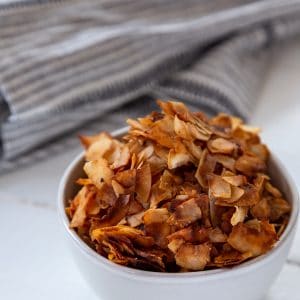