This cheesy vegan broccoli cheese soup recipe is so creamy and comforting. Whip up this delicious dairy-free soup made with healthy vegetables and a cashew cream sauce in just 30 minutes! Gluten-free!

This recipe is from our second cookbook, The Ultimate Vegan Cookbook, and inspired by our former love, Panera’s cheddar broccoli soup

Thanks to the magic of cashews and nutritional yeast, we were able to create a healthy broccoli cheese soup with less calories and fat, yet all of the creamy goodness you’d expect.

This is similar our Spicy Green Cauliflower & Brussels Sprout Soup, and pairs well with our Homemade Vegan Buttermilk Biscuits recipe.

Notes on the Ingredients

Potato – You can use any kind of potato you have on hand. We prefer a Russet potato because it has a lot of starch, which helps to thicken the soup.

Cream Sauce – This makes the soup silky and creamy. Adding vegan sour cream to the cashew sauce gives it an even silkier texture and a nice pop of tanginess to the flavor.

Carrots – Not only do they add vitamins and nutrients, they give the soup a beautiful cheddar cheese color.

This is a quick and easy recipe. Here is a visual overview with simple guidelines.

8. Pour in the broth

9. Cover the vegetables with the broth.

10. Add the broccoli and nutritional yeast and cook until the vegetables are fork tender.

12. Add the cream sauce to the soup and blend with an immersion blender until the vegetables are broken down into small pieces.

Hint: If you don’t have an immersion blender, you can pour small batches of the slightly cooled soup into a stand blender.

Cashews – if you have a nut allergy, replace the cashews with hemp or sunflower seeds.

Potato – butternut sqaush will give the soup a sweet flavor, although it’s a good replacement for those who can’t eat potatoes.

Shredded vegan cheese – if you don’t want to make the cream sauce, add vegan shredded cheddar cheese by So Delicious, Violife, Miyoko’s, Chao, or Daiya and stir into the soup after blending until melted.

Spicy – add chili pepper flakes, cayenne pepper, or a chopped and seeded jalapeno pepper when you saute the onion, carrots, and celery.

Kid friendly – add lots of shredded vegan cheese and crushed potato chips or pretzels. It’s a great way to get them to eat their veggies!

How to Serve and What to do with Leftover Soup

Bread Bowl – for a fun and easy way to serve (think less dishes to wash), serve the soup in a bread bowl.

Baked Potato – Pour it over a baked potato. This soup would work great with our vegan cheddar & broccoli stuffed baked potato.

Rice – cheese and rice are always a good combination. Just combine with cooked rice for a quick and easy meal.

It will give you more control in regards to the texture of the soup.

If you don't have an immersion blender, a typical stand blender will work, too.

Can I make this ahead of time?

Yes, this can be made up to 4 days before serving. Reheat on a low setting until warmed through.

How do I thicken cheddar broccoli soup?

If you want a thicker soup, whisk a ¼ cup of water with a tablespoon of cornstarch and then whisk it into the soup. Let the soup simmer for approximately 15 minutes and stir often.

Why is the cheese not melting?

If you added shredded vegan cheese to the soup, it may take several minutes for it to melt. Keep stirring until it's completely melted.

How do I store the soup?

Store it in an airtight container in the refrigerator for up to 4 days.

Does this freeze well?

Yes, store it in a freezer safe container for up to 3 months. Thaw in the refrigerator and reheat it on medium-low heat. Stir frequently to avoid scorching. 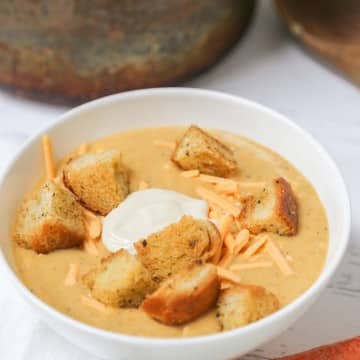