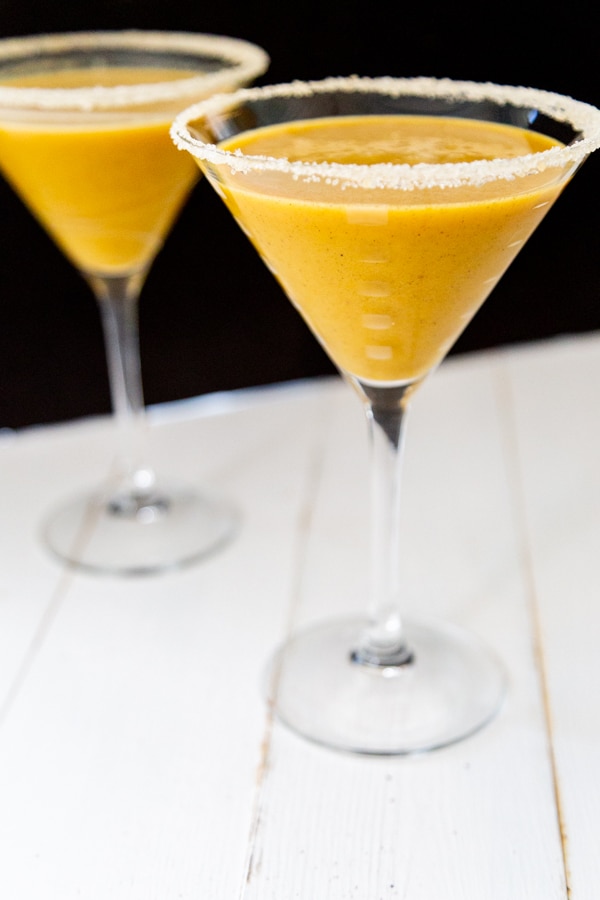 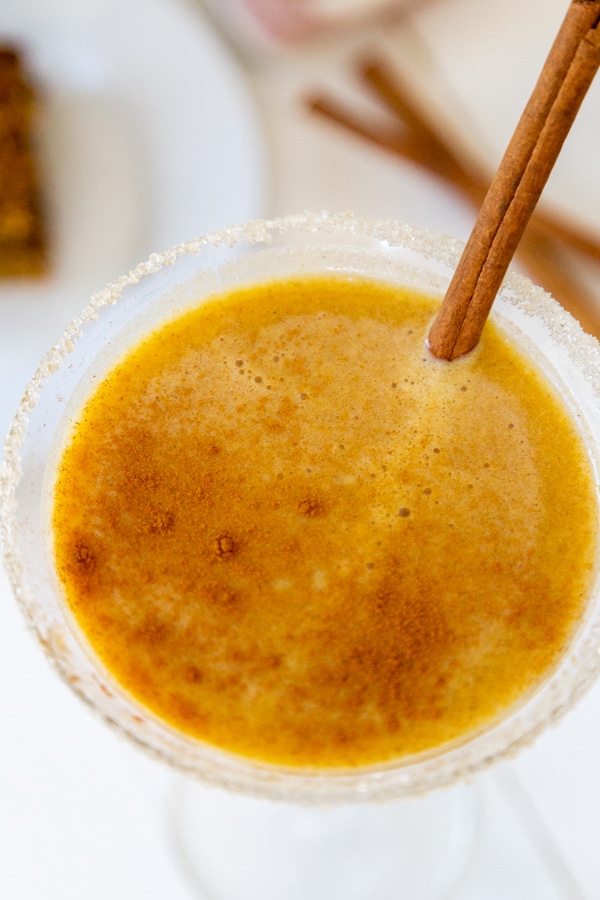 If you love pumpkin pie, you are going to adore this pumpkin spice martini.

I’m not a martini drinker, but this…. it’s my new obsession.

It’s so creamy and has a lovely warm flavor, thanks to the spices.

And, it’s made with real pumpkin puree. There’s nothing artificial about this pumpkin drink recipe.

Who would have thought that putting real pumpkin in a cocktail would taste good?

I was a bit skeptical at first, but that first sip was all the reassurance I needed.

The soy milk and the pumpkin take away the bite of the rum (you can use vodka if you like), it’s like drinking a slice of spiked pumpkin pie.

This is one of those sweet martini recipes that aren’t overly sweet, which is why we love it so much. And so do our friends, who request them every fall. 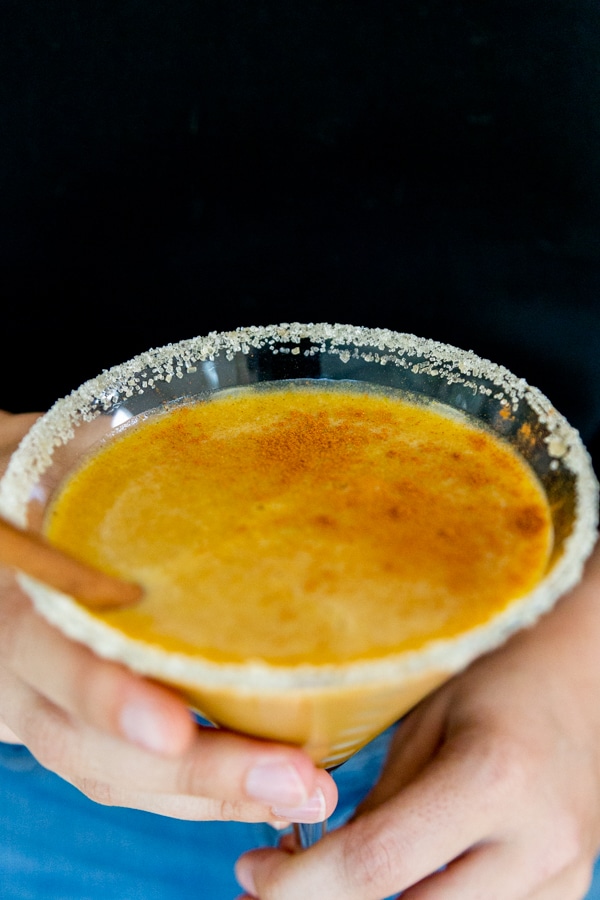 HOW TO MAKE A VEGAN PUMPKIN SPICE MARTINI

One of the best parts of this martini recipe (besides how good it tastes), is that it’s made with all natural ingredients.

The recipe is free of fake colors and flavors, and believe it or not, it’s one of the few cocktails that actually has antioxidants, vitamins, and nutrients.

Pumpkin has a ton of Vitamin A and other amazing health benefits. We like to call this a healthy cocktail. 😉

Whisk the nutmeg, cinnamon, allspice, and cloves together until they’re completely combined.

Mix a quarter teaspoon of the spice blend and mix with the brown sugar and spread it out on a small plate.

Put the ice cubes, soy milk, pumpkin puree, maple syrup, and vanilla, and the remaining spice mix into a martini shaker and shake well. Strain through the shaker into the martini glass. Garnish with a cinnamon stick.

WHAT TO SERVE WITH A PUMPKIN MARTINI

This is such a great Halloween and Thanksgiving drink recipe. It’s so good, that it was chosen as a TOP FIVE PUMPKIN SPICE COCKTAIL by Bitchin Lifestyle!

We love to serve it with the following: 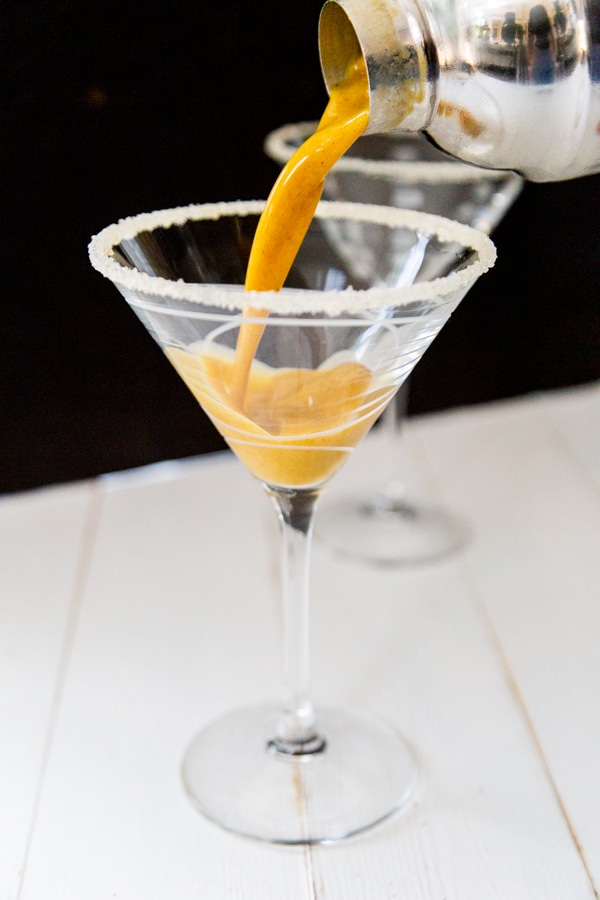 Make our vegan pumpkin spice martini recipe and let us know what you think. We love to hear from you! And, don’t forget to take a picture of your gorgeous creation and tag us @veganosity on Instagram. 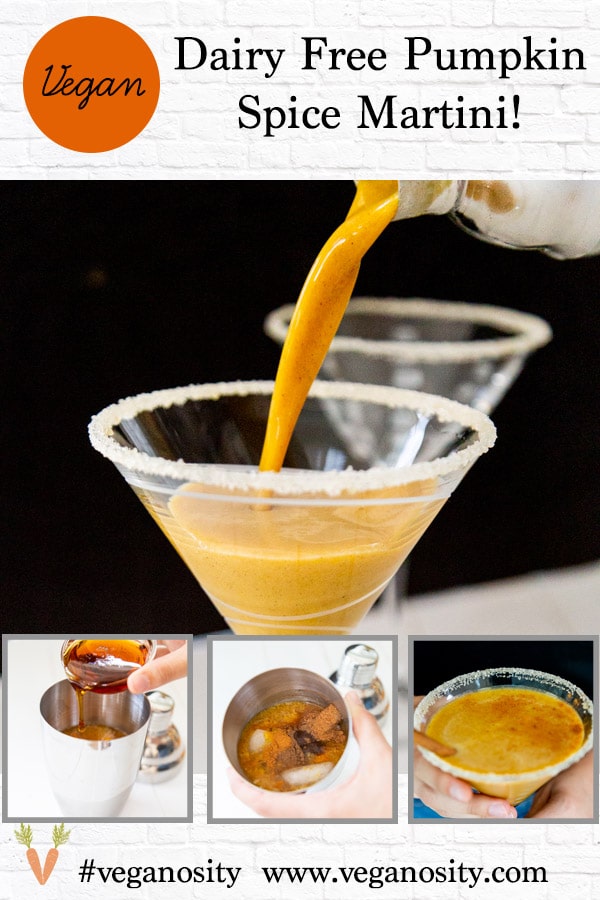 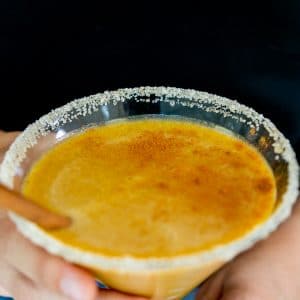