Our baked pumpkin spice doughnuts are so warm and delicious. They're easy to make and the chocolate cinnamon frosting takes them to another level. They're perfect for a Halloween or Thanksgiving breakfast treat. 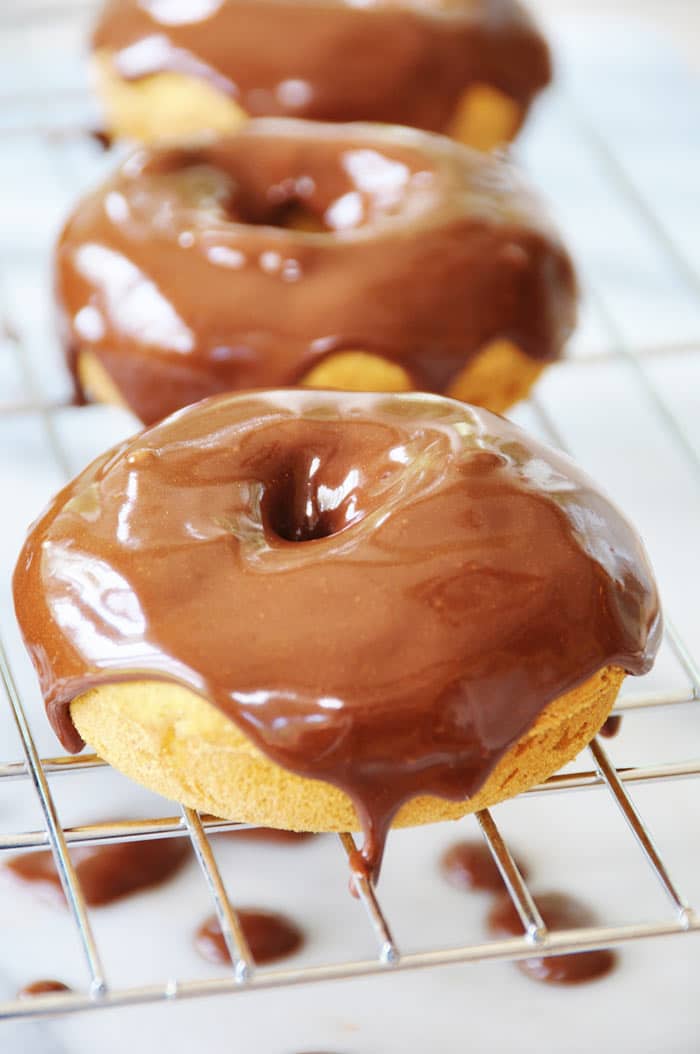 Sweet mother of all things pumpkin, remove this tray before I eat every last one of these Vegan Pumpkin Spice Doughnuts with Chocolate Cinnamon Icing.

You guys, these bad boys are dangerously good. As someone who prides myself on not having a sweet tooth, I’m feeling like I don’t even know who I am anymore.

Maybe it’s the pumpkin and the spice in the moist and cake like baked doughnuts that are making me weak. Or it could be the dark chocolate and cinnamon icing?

Why am I even wondering out loud? It’s the pumpkin spice doughnut and the wickedly good frosting that’s brought me to my knees.

A doughnut literally brought me to my knees.

As I was shoving the last piece of a pumpkin spice doughnut into my mouth a large crumb fell to the floor and I went down.

My knees hit the marble and I found myself frantically sweeping my hand under the kitchen cabinet to retrieve it, as I wondered if the three second rule applied to crumbs that fall under the cabinet.  Houston, I have a problem.

I’d like to think that I was just trying to prevent my sweet little Coco from eating the dark chocolate frosting--it’s bad for dogs in case you didn’t know—but that would be a lie. I wanted it for myself, my pumpkin spice loving, gluttonous self.

First, the doughnut. It’s exactly what a doughnut should be. It’s firm, a little spongy, cake like, and moist. If I didn’t know that it was baked I’d swear it was fried. And the pumpkin, nutmeg, cinnamon, ginger, and cloves……  Cue the trumpets and angels singing. 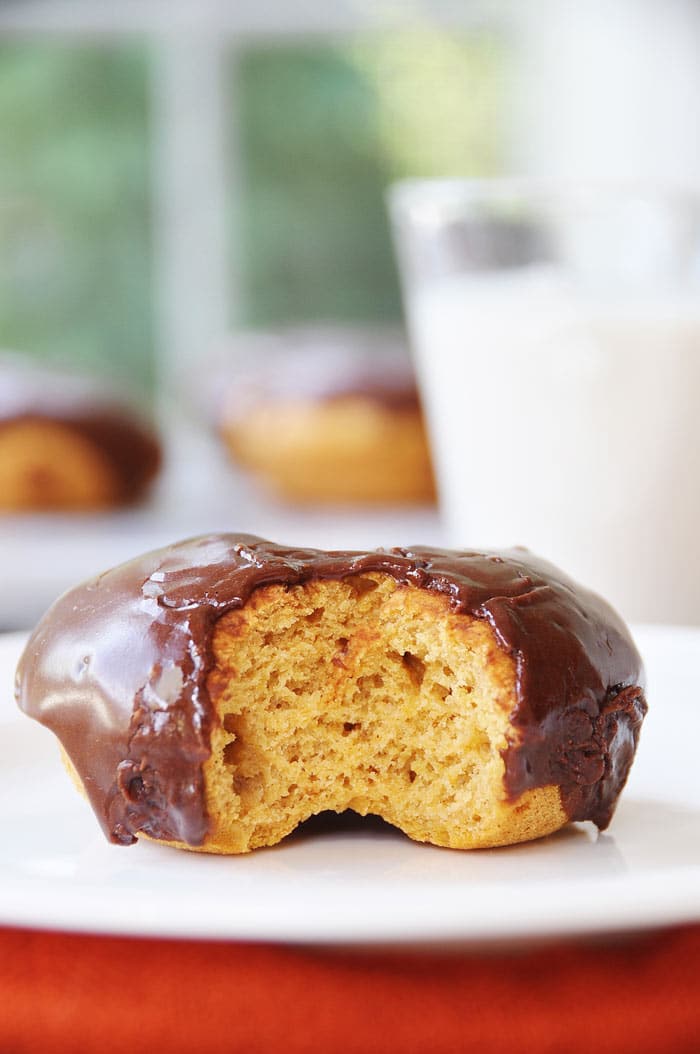 And if the pumpkin spice flavors aren’t enough to make you swoon, there’s the dark chocolate and cinnamon icing that covers the top and drips down the sides.

The pumpkin spice and the chocolate are a match made in doughnut heaven.

Anyway, I’m going to go out on a limb and guess that you’re going to want to make these doughnuts for yourself? Of course you do. How could you possibly resist these fabulously delicious treats of autumn? 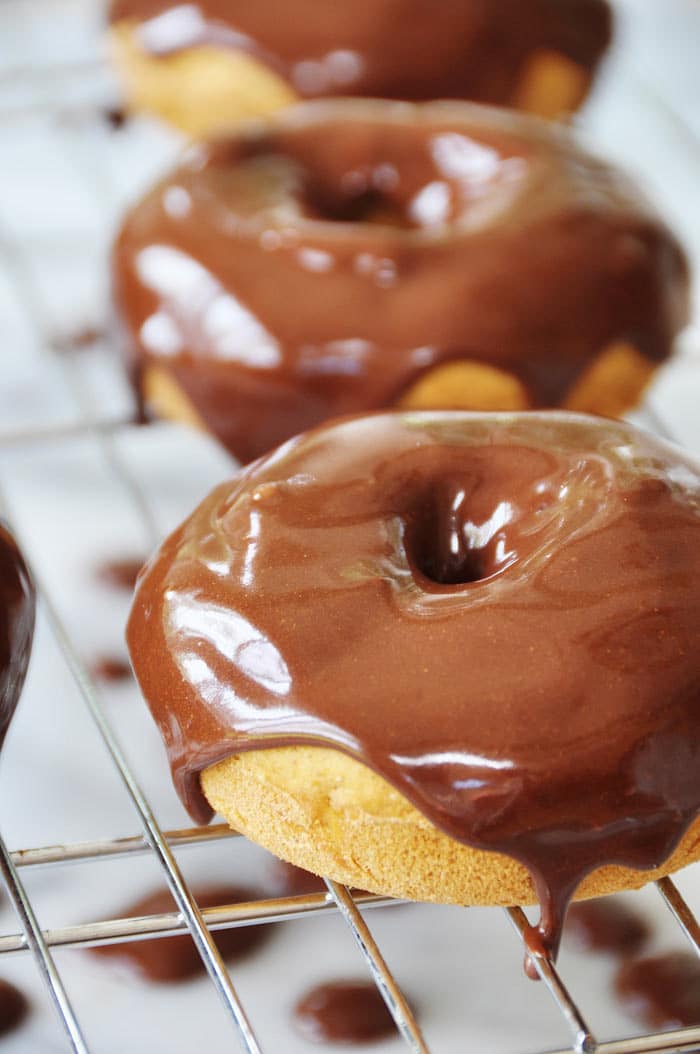 You’ll love how easy they are to make, and they’ll make you the most popular kid on the block if you can stand to share them.

The first thing you’re going to need is a doughnut pan. You’ll also want a mixer or a heavy duty whisk.

Combine the dry ingredients, then the wet (instructions are at the bottom of this page), then both, and you’re ready to spoon the pumpkin batter into the doughnut pan and bake up these gorgeous pillow rings of yum.

While the doughnuts are cooling you can make the chocolate cinnamon icing. If you’re able to hold back from licking the spoon I’m going to crown you as the king or queen of self-control. You will rule the land of all things boring.

Don’t be the king or queen of self-control. At least when it comes to vegan baked pumpkin spice doughnuts with chocolate cinnamon icing.

Make these on a Saturday morning and enjoy them throughout the weekend. If they last that long. 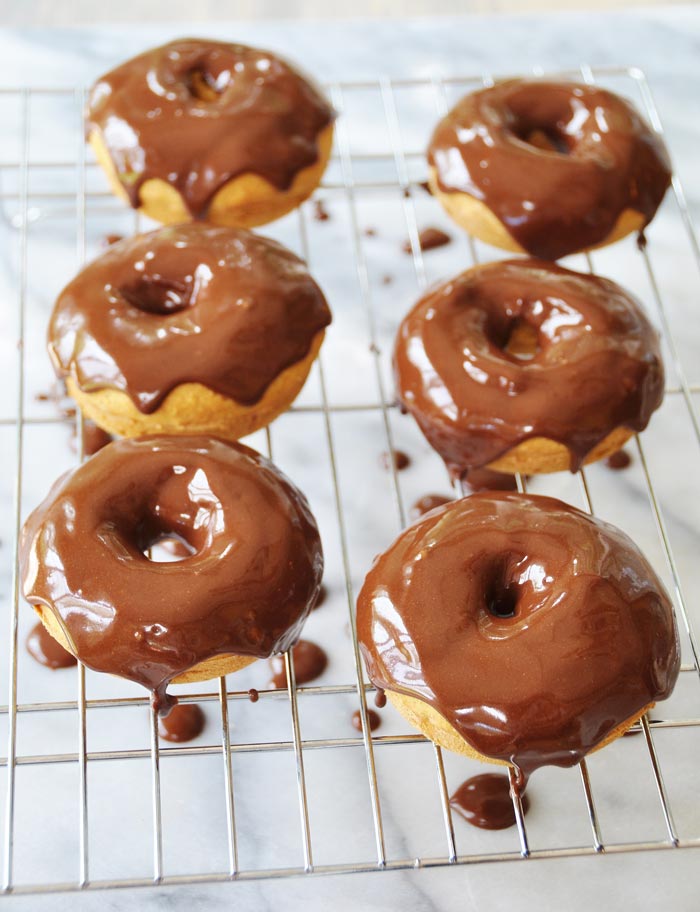 HOW TO STORE BAKED DOUGHNUTS

Store the doughnuts in an air tight container in a cool dry place for up to three days.  You don't have to put them in the refrigerator, but you don't want to store them in a warm area or they won't stay fresh.

We haven't tried freezing them because they don't last long enough to have to. If you do freeze them, make sure to put them in a freezer bag and take them out of the bag before you defrost them so the frosting doesn't stick to the bag.

Are you ready for the pumpkin spice season?

What is your favorite doughnut?

Have the leaves started changing color where you live?

If you don't have a doughnut pan, a mixer, or a good whisk, click on the photos below to purchase. 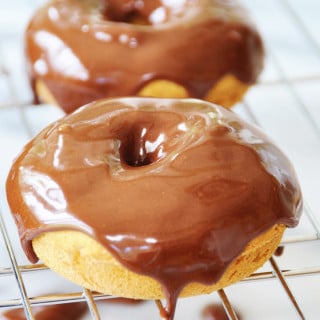