Impress your guests by making them these little fried pockets of ricotta and shiitake deliciousness. Crispy homemade stuffed wontons, with vegan ricotta and sautéed shiitake mushrooms dipped into a tart and tangy cranberry orange sauce. These appetizers couldn't be more enticing. 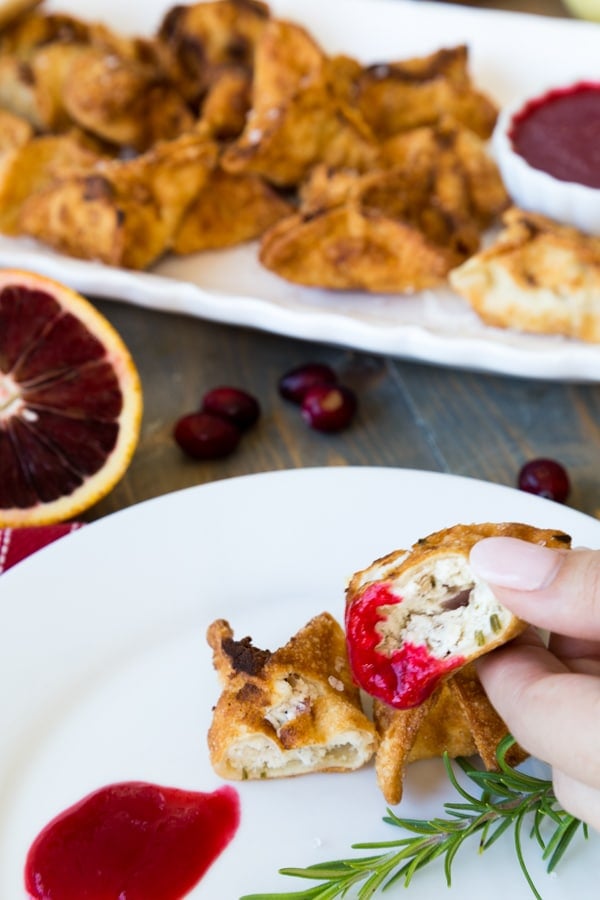 As the holidays approach, we all have visions of stuffing, cheese plates, and a ton of traditional foods . And while that may all be well and good, I’m craving something different.

As much as I adore the typical seasonal foods mentioned above, sometimes you need to shake it up and step out of the box.

VEGAN APPETIZERS TO SERVE AT A PARTY

Linda and I love to throw a good party. Whether it's a small happy hour with our closest friends, or a large soiree to celebrate something special, like my bridal shower. We call ourselves the Vegan Martha Stewarts. LOL!

We love everything about hosting a get together.

Creating a theme, decorating the table and the house, and of course, making delicious vegan food that our non-vegan guests love is our passion. If they ask for the recipes (they always do) at the end of the night, we know the party was a success.

Some of our favorites from the past years are our Onion Confit Tartlets ,  and our Oven Fried Parmesan Zucchini Crips.

This year, our guests are in for another delectable appetizer. Our crispy and savory vegan stuffed wontons with the most incredible cranberry dipping sauce.

HOW TO MAKE VEGAN WONTON WRAPPERS 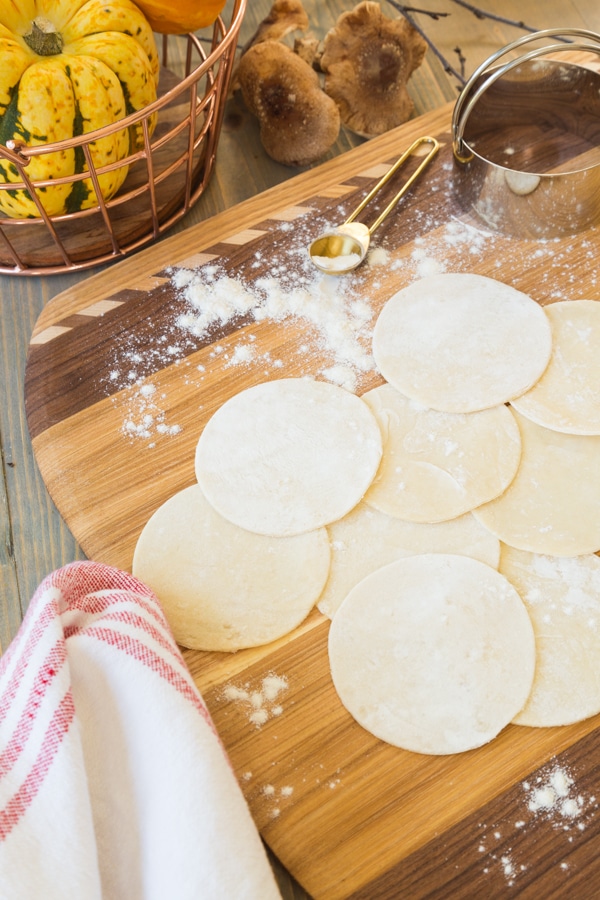 We haven't been able to find vegan wonton wrappers in the grocery stores where we live, so we make our own. It's really easy and you only need 4 ingredients to make them.

This recipe can be found in our second cookbook, The Ultimate Vegan Cookbook. Can I just give my mom and I a quick pat on the back? I just read the reviews that have come in, and the one recipe that a review mentioned was one of ours. 🙂

The reviewer made our Drop Biscuit Root Vegetable Pot Pie and said it was "fantastic."

Back to the wonton wrappers. 😉

We won't make you buy our cookbook to get the recipe. That wouldn't be fair. Although, we think you'd love it! Read all about it here.

2. In a large bowl, whisk the flour and salt together. Then add the egg mixture and fold until combined. Add a tablespoon of water at a time until the dough forms a solid ball. Cover with a towel and let it rest for 15 minutes.

3. Knead the dough on a floured surface for 5 minutes then form it into a ball, put it back in the bowl, cover and let rest for 30 minutes.

4. Divide the dough into 2 pieces and roll out one piece on a floured surface until it's paper thin. Cut into 4-inch (10-cm) circles. We use a round cookie cutter. Repeat with the rest of the dough. 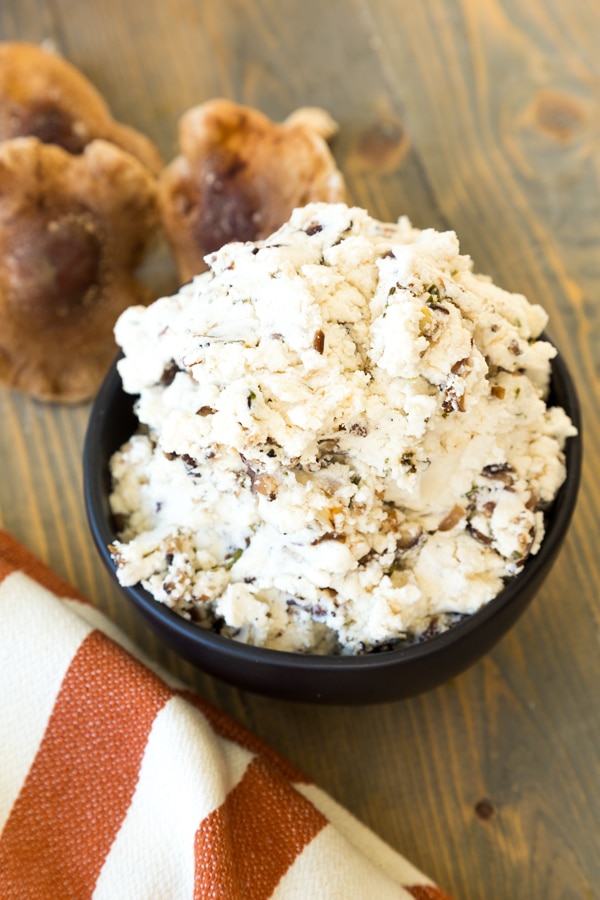 Now that you're wontons are ready, it's time to make the filling.

We have a few wonderful vegan ricotta options for you.

If you can't find Kite Hill's cheese, you can make our HOMEMADE ALMOND RICOTTA . It’s super easy to make and is a spot-on vegan-copycat for ricotta. One other option: if you have a nut allergy you can make some awesome tofu-ricotta recipes! All you have to do is turn to Pinterest to find one.

Lastly, if you can't or won't eat nuts or tofu, you can fill the wontons with mashed potato & scallions. We suggest sauteing the  scallions with a bit of olive oil before combining them with the mashed potatoes.

Here's a wonderful Roasted Garlic Mashed Potato recipe. Just make sure you peel the potatoes, as this recipe is more rustic.

How to Make Stuffed Wontons

The filling is super easy to make.

2. In a large bowl, mix the mushroom mixture and the ricotta together until completely combined.

HOW TO FILL WONTONS 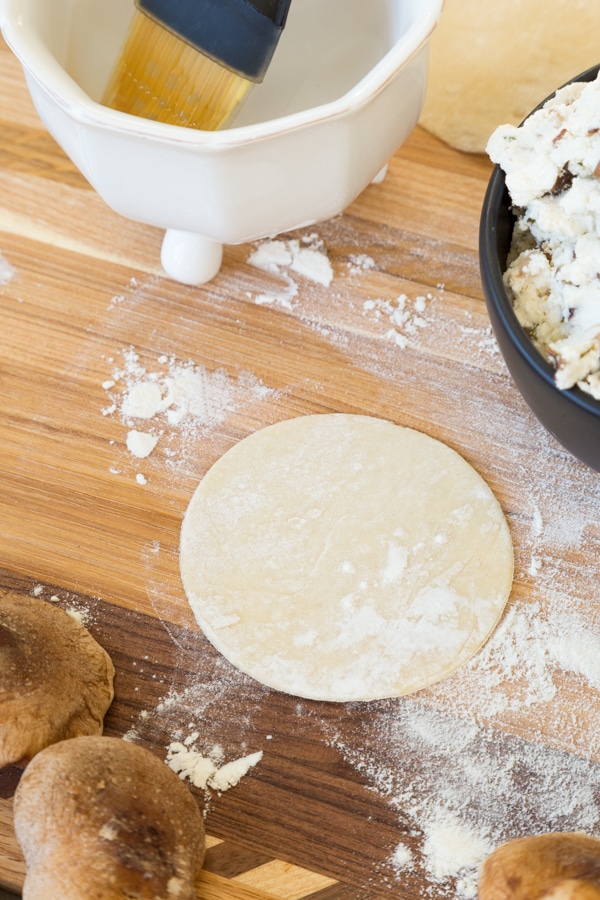 Place the filling in the middle of the wonton and brush the edges with water. 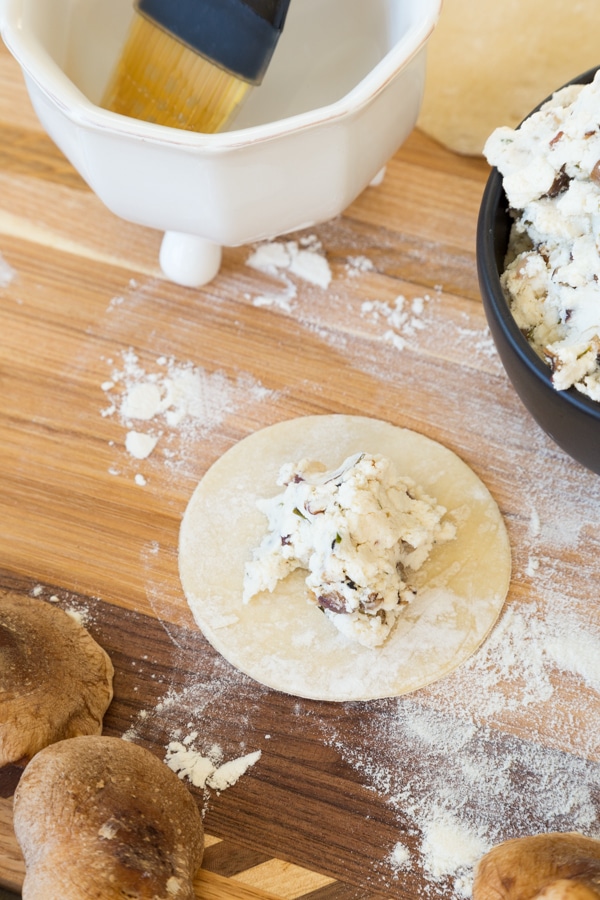 Pinch one edge of the wonton. 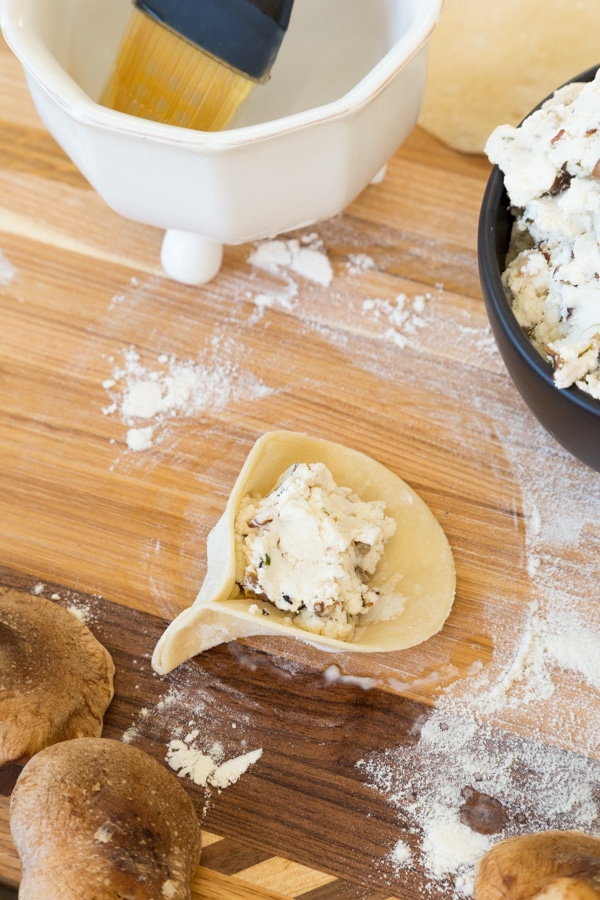 Add one more pinch next to your previous fold. 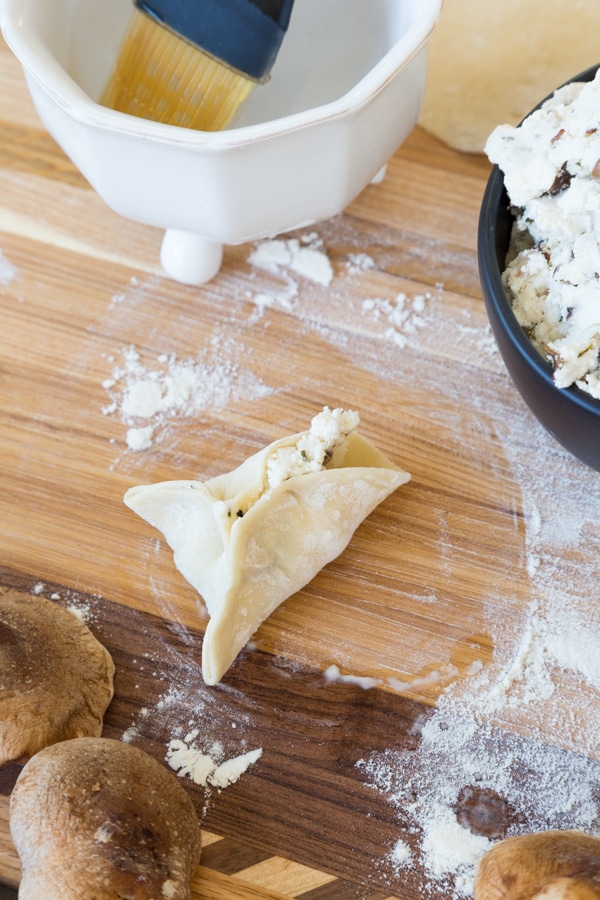 For the last fold, pull the middle part of the other side of the wonton towards the center and pinch closed. 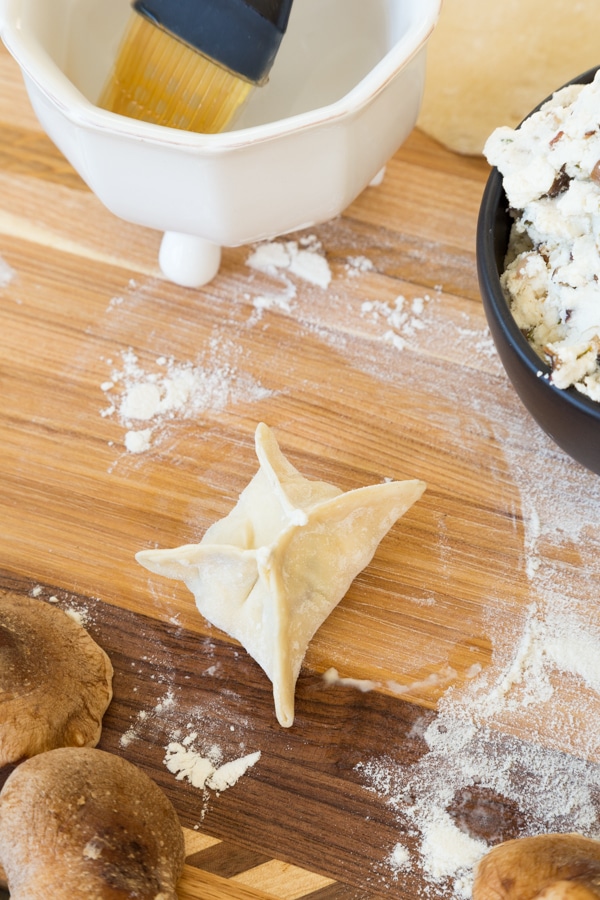 HOW TO FRY STUFFED WONTONS 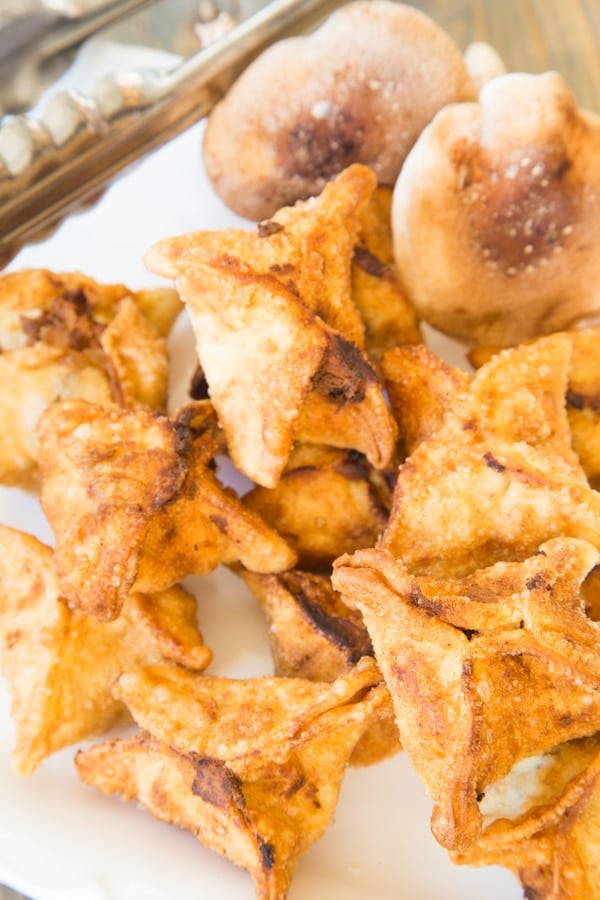 When you heat your skillet to medium high heat, regardless of whether you believe you should add the oil before or after the pan is heated, ALWAYS heat your oil before adding your ingredients. Cold oil plus cold ingredients just won’t work. You'll end up with soggy and greasy food.

2. Test the oil to make sure it's hot by adding a small piece of a wonton wrapper to the oil. If it sizzles and bubbles, it's ready. When it's hot, add the wontons (don't pile them in, they should have room to cook) and fry for approximately two minutes per side, or until the entire wonton is golden brown and crispy.

3. Take them out of the pan and place them on a cooling rack that's lined with paper towel. This allows the excess oil to drip off.

NOTE: If you're not serving immediately, keep them warm and crispy in a warm (not hot) oven until ready to serve.

Finish them off by sliding them onto a paper-towel-lined plate and top with salt!

2. Let them cool for about 15 minutes and then strain them over a small bowl. 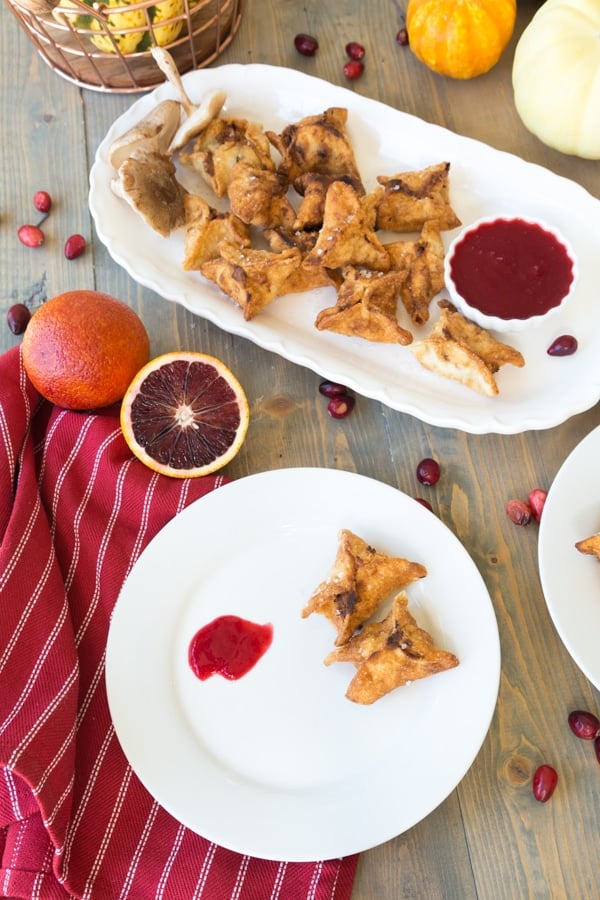 This is such a festive recipe for the holidays. You can make them ahead of time and freeze them and then pop them in a 375F oven and heat until they're crispy and hot in the middle.

Make this recipe and let us know what you think. We love to hear from you! And, don’t forget to take a picture of your gorgeous creation and tag us @veganosity on Instagram. 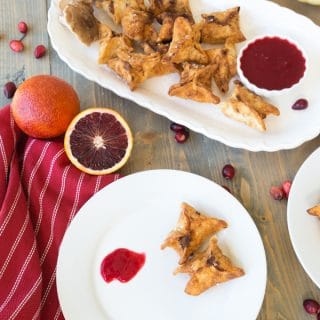 FOR THE DIPPING SAUCE

TO MAKE THE WONTONS 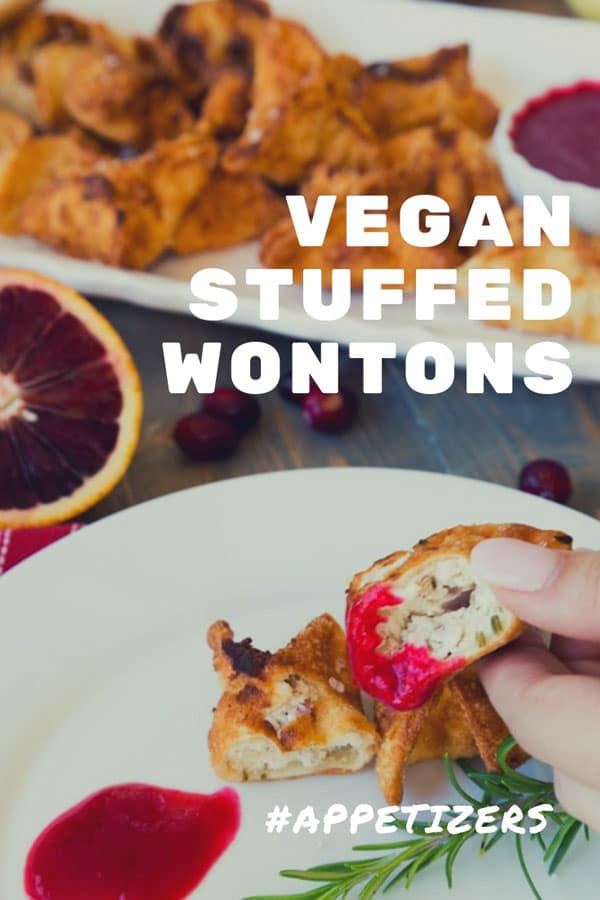