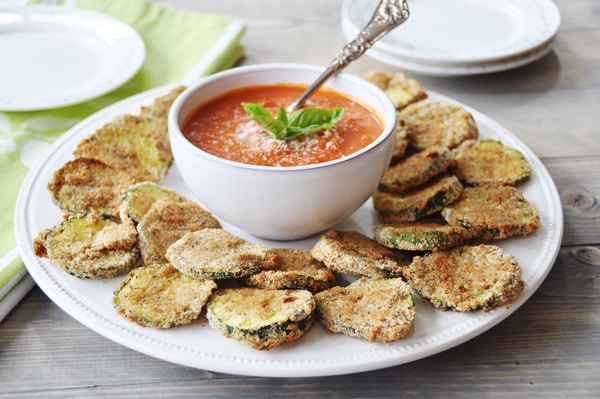 Sometimes you just need something savory, crispy, hot, and salty. When that craving hits, don’t go running for a bag of potato chips or French fries. Those things won’t satisfy that craving like fresh from the oven homemade vegan oven fried parmesan zucchini crisps will. And, besides being outrageously good, these are so much better for you.

If you’ve been following Veganosity lately, then you know that my garden is producing country fair blue ribbon quality zucchini. Like this. And, you'd also know that I promised you that I’d share all of my favorite zuke recipes with you this month. Like this. But I have to say, these low calorie baked zucchini crisps have definitely jumped to the head of the class. You guys, these are quality snack quenchers. 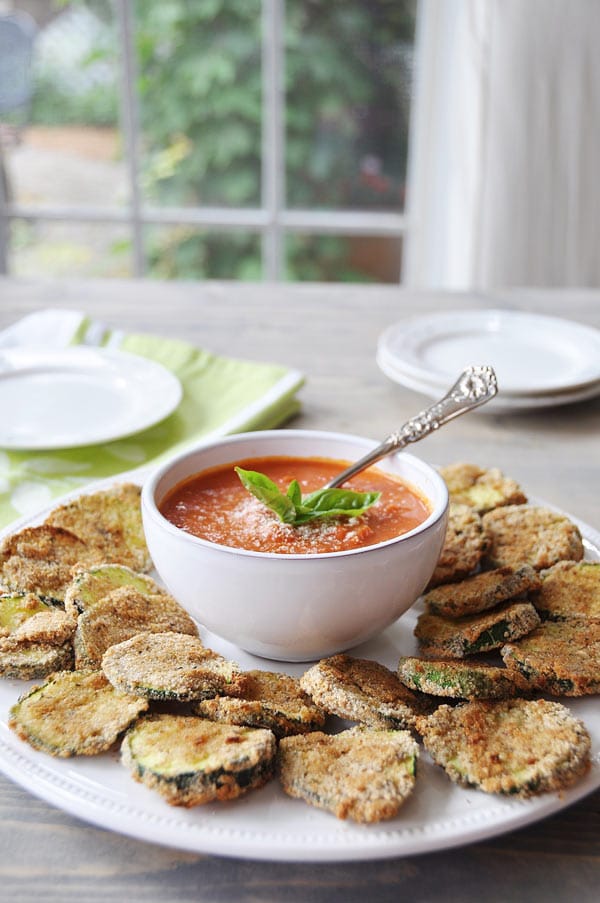 Since my college son arrived home for the summer, potato chips have been a staple item on my grocery list. Do you know what that means to this salt lover? I find myself being pulled toward the snack cabinet every time I get within ten feet of it, and then I have to hold my hands out and push against that darn magnetic field that’s pulling me in. Until yesterday. Now I just give the finger to those high calorie, overly salted, empty calorie chips, because I can whip up a batch of healthy parmesan zucchini crisps in thirty minutes flat. Bam!

Zucchini season is in full swing right now, which means that you can find them in abundance at your local farmers market or grocery store. Or if you’re fortunate enough to grow your own, you can just step outside and pick some.

So what are you waiting for? Go and gather up some zucchini.  I’ll wait right here until you’re back, and then we’ll get cooking.

Well that was fast. The savory and salty loving monster within me is starting to wake, so let’s get busy making some oven fried parmesan zucchini crisps.

First, you’ll need one large, or two medium zucchini. Wash, dry, and cut off the ends, then slice them into one quarter inch discs. Lay the discs on a sheet of paper towel and lightly sprinkle with salt. This will draw out the excess water and make your crisps crispier. Let the discs sit for about fifteen minutes. 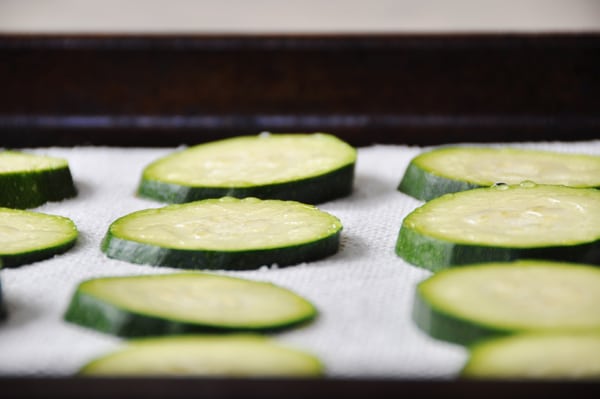 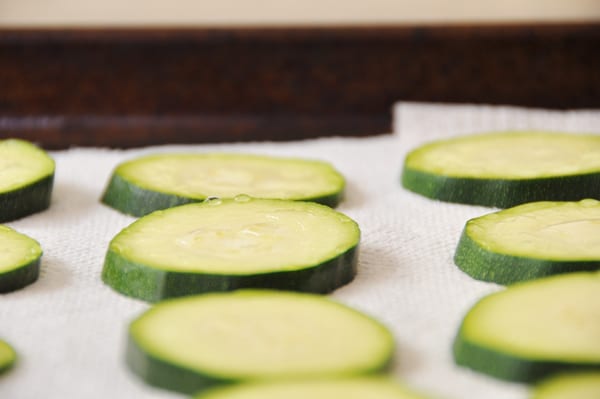 While you’re waiting for the zucchini to purge its excess water, put the flour, milk, and breadcrumb mixture in seperate bowls.

Okay, now that the water has pooled on the surface of the zucchini, take a paper towel and pat the excess water away. Don’t be afraid to press into the discs, and you’ll probably need an extra towel if your zuke has a lot of water.

Now, dip the zucchini chips—one by one—in the flour and coat all sides, then dip them into the almond milk (I use Silk brand unsweetened original), and then press them into the bread crumb mixture until fully coated. Line the crisps up on a baking sheet and lightly spray olive oil on top. Flip and spray the other side. If you don’t have olive oil spray you can lightly dab the oil on with a pastry brush. Just be careful not to remove the bread crumb coating.

Sprinkle some vegan parmesan (I use Go Veggie brand) on top, and bake for seven minutes, then flip the crisps and bake for another seven to eight minutes, or until both sides are golden brown.

Remove your gorgeous and delicious vegan oven fried parmesan zucchini crisps from the oven and eat this yummy appetizer immediately. Serve them with a side of marinara sauce. If you can’t eat them immediately you’ll want to crisp them up in the oven again, because the longer they sit, the less crunchy (these won’t be crunchy all the way through like a potato chip) they’re going to be. That’s the nature of zucchini. 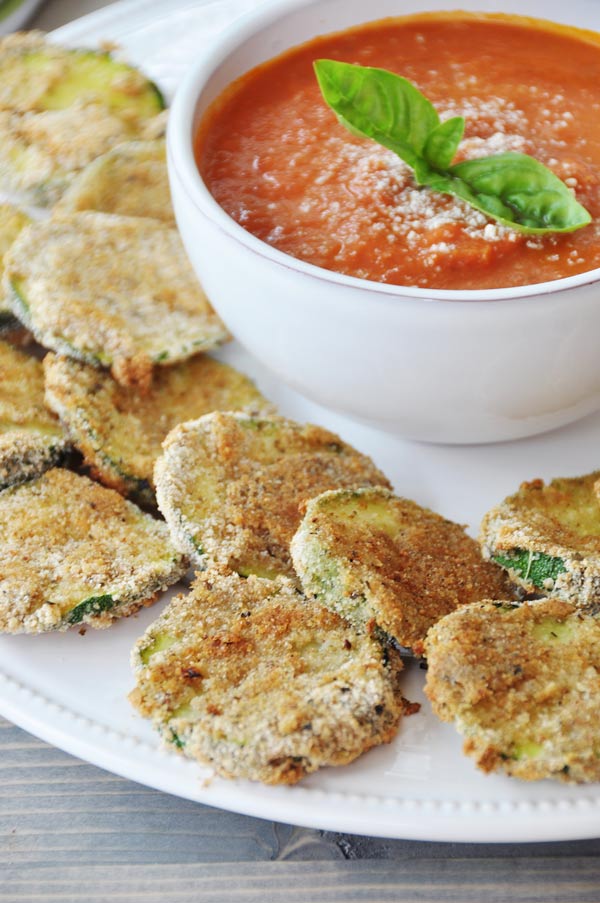 Do you crave salty, savory food?

Have you ever had zucchini crisps?

Are you growing your own zucchini or are you off to buy some?

Do us a favor, we want to show the world that plant-based foods are delicious and exciting. So let's connect and share all of this awesomeness with the world. Hop on over to our Facebook page and give it a like, and follow us on Instagram and Twitter, and follow us and share this and other Veganosity recipes on Pinterest. We'd be so grateful if you did. If you like this recipe and can't wait to see what we're going to share next, subscribe to Veganosity. Just fill in the subscription box above our picture in the top right corner of the page. And, Alex and I love hearing from you, please leave a comment and let us know what you think of our recipes 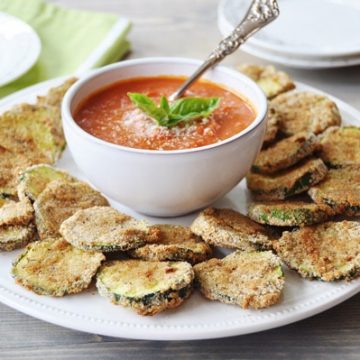 Store in an airtight container in the refrigerator for up to 4 days. Crisp up in the oven.  Freeze in a freezer safe container for up to 3 months. Reheat in a 350 F (176 C) oven.  Nutrition Disclaimer 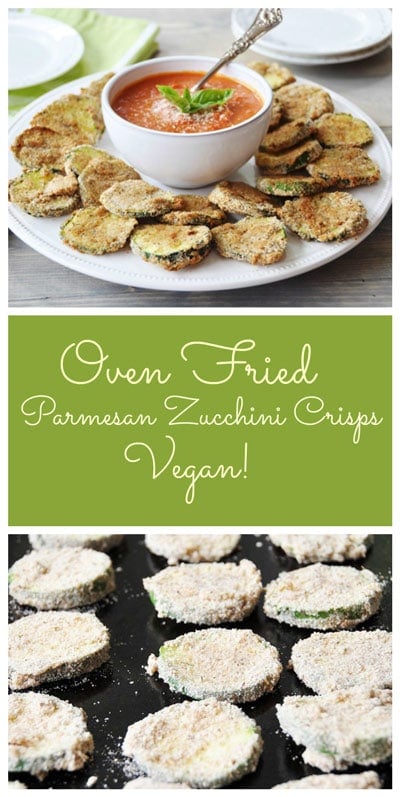