This decadent pumpkin pasta recipe is bursting with flavor and it's so easy to make. It tastes like it took hours to prepare, when actually it takes less than 45 minutes! 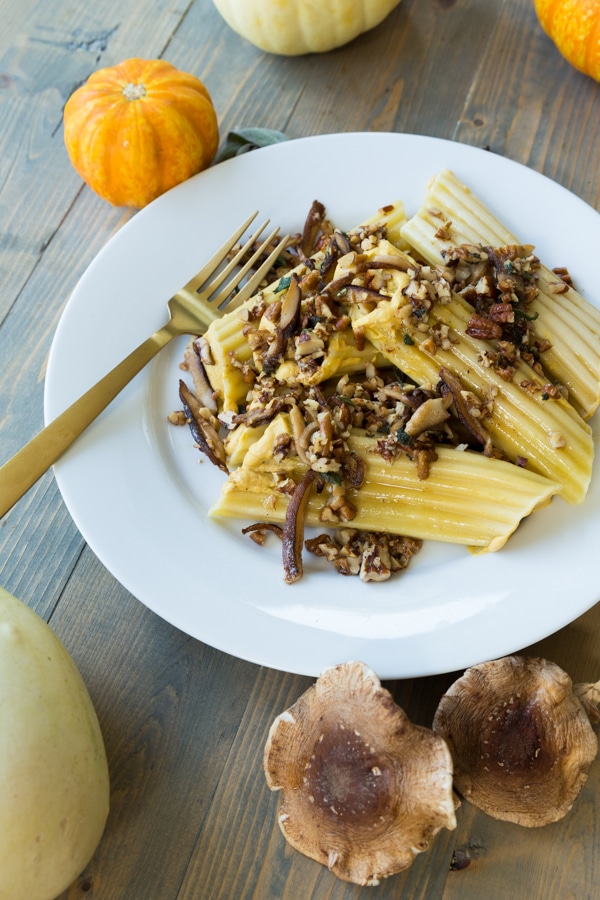 Stuffed pasta shells are everything!

Seriously, what could be better than tubes of chewy pasta stuffed with a creamy pumpkin cashew filling?

I'll tell you what could be better. Stuffed manicotti shells topped with slivered shiitake mushrooms browned in vegan butter with fresh sage and thyme, and toasted walnuts. Now we're talking!

If you haven't tried making manicotti stuffed with a savory pumpkin filling, now is the time. Pumpkin is in season and the cooler temperatures are perfect for this comfort food recipe.

For those of you who don't know, manicotti is a tubular shaped pasta shell. In Italy, it means "little muffs" or "little shirtsleeves."

This type of noodle is made for stuffing. The stuffing of choice for this sort of pasta is cheese, or a combination of cheese, red sauce, and a vegetable and/or meaty filling. Or in this case, a creamy pumpkin cream filling made with cashews.

HOW DO YOU MAKE A CREAMY VEGAN PUMPKIN FILLING FOR PASTA? 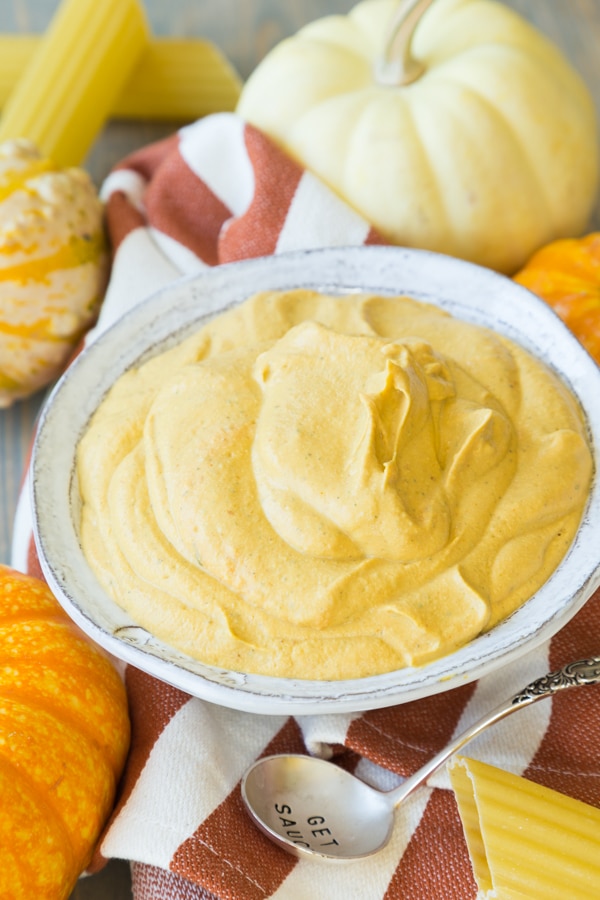 It's so easy to make a rich and creamy pumpkin filling. All you'll need is a can of pumpkin puree (not pumpkin pie filling), one cup of raw cashews, cashew milk, garlic, dried Italian seasoning, and sea salt and black pepper.

2. Add the remaining filling ingredients to the blender and whip it up until it's thick and creamy. You shouldn't be able to detect any solid pieces of the nuts. If you do, keep blending and scraping the sides of the blender.

NOTE: You want this sauce to be thick, not runny. It won't fill the shells if it's too thin.

HOW TO MAKE AND STUFF MANICOTTI PASTA SHELLS 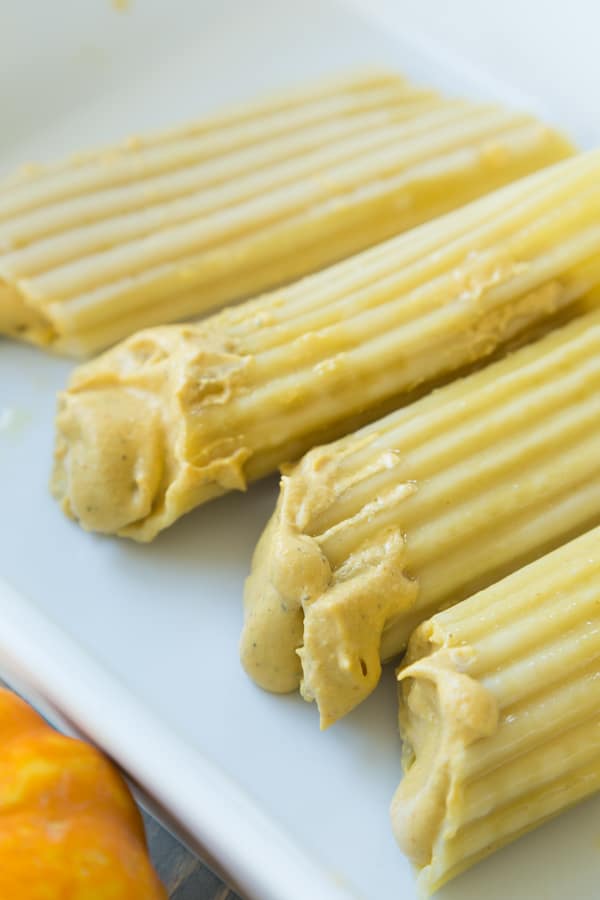 Once you've made the filling, it's time to make the manicotti.

2. While the manicotti noodles are boiling, saute the mushrooms, herbs, and walnuts in the butter.

3. Drain the noodles and line them up in a baking pan. Put the pumpkin filling into a pastry bag or a large plastic bag with the corner snipped off and squeeze the filling into each noodle until they're filled.

4. Evenly spoon the shiitake mushroom, walnut, and browned butter sauce over the top and bake for 15 minutes, or until the centers are hot.

That's all you'll need to do to make this rich and delicious vegan fall pasta recipe.

HOW TO STORE OR FREEZE STUFFED MANICOTTI

You can make this pumpkin manicotti recipe ahead of time. If you're going to serve within a few day, just cover it and put it in the refrigerator and reheat in a 350F oven for about 20 to 25 minutes, or until the center is hot.

You can also freeze them for up to 3 months in a freezer safe container. Just thaw overnight in the refrigerator and heat the same as above.

WHAT TO SERVE WITH STUFFED PUMPKIN MANICOTTI 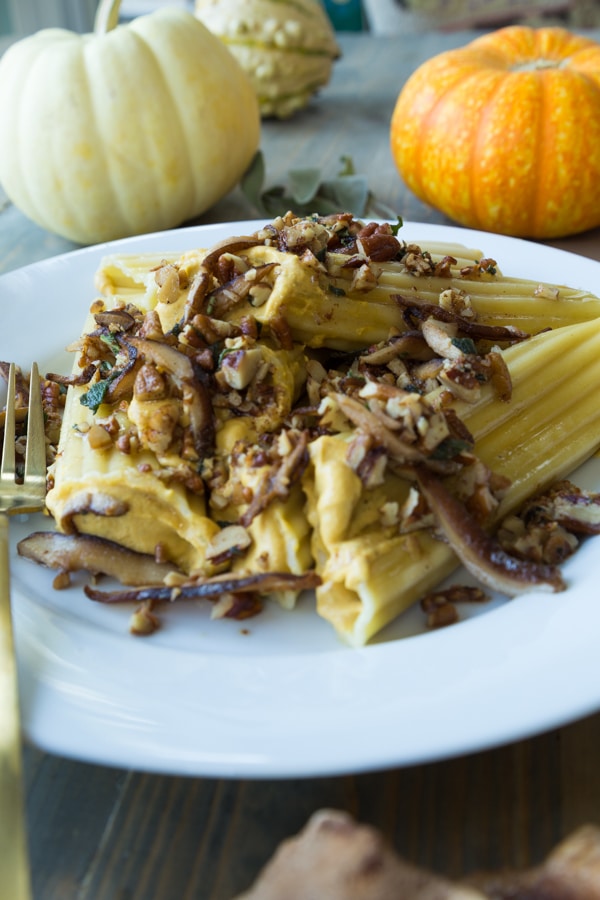 This is such a savory and rich pasta recipe that we like to serve it with a crisp and light salad to balance it out.

We love this one.

Make this recipe and let us know what you think. We love to hear from you! And, don’t forget to take a picture of your gorgeous creation and tag us @veganosity on Instagram. 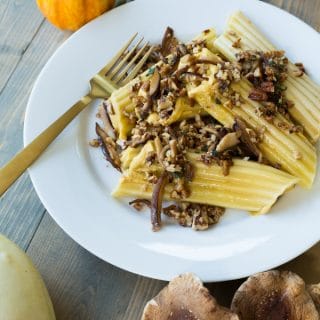 FOR THE PUMPKIN CREAM FILLING

FOR THE MUSHROOM TOPPING

TO FILL THE MANICOTTI 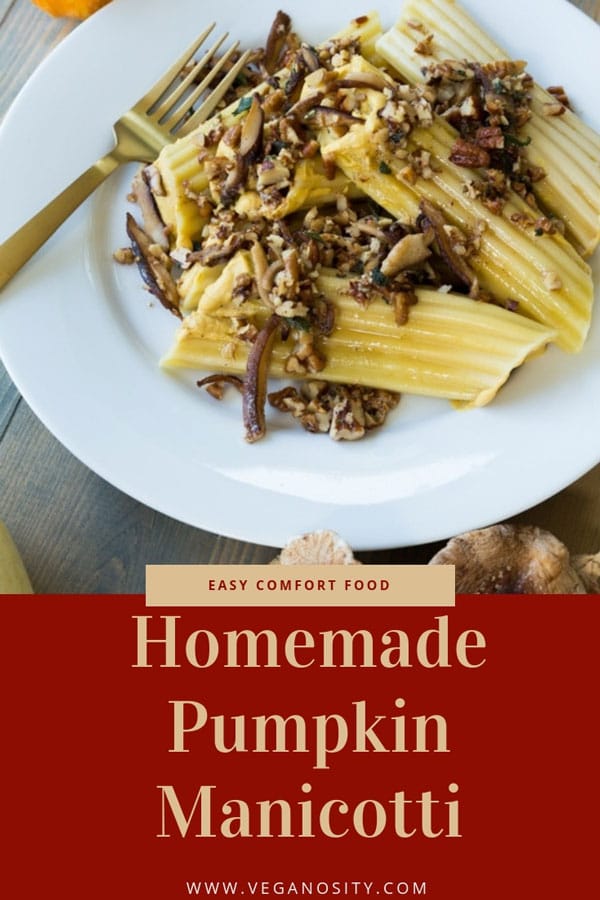 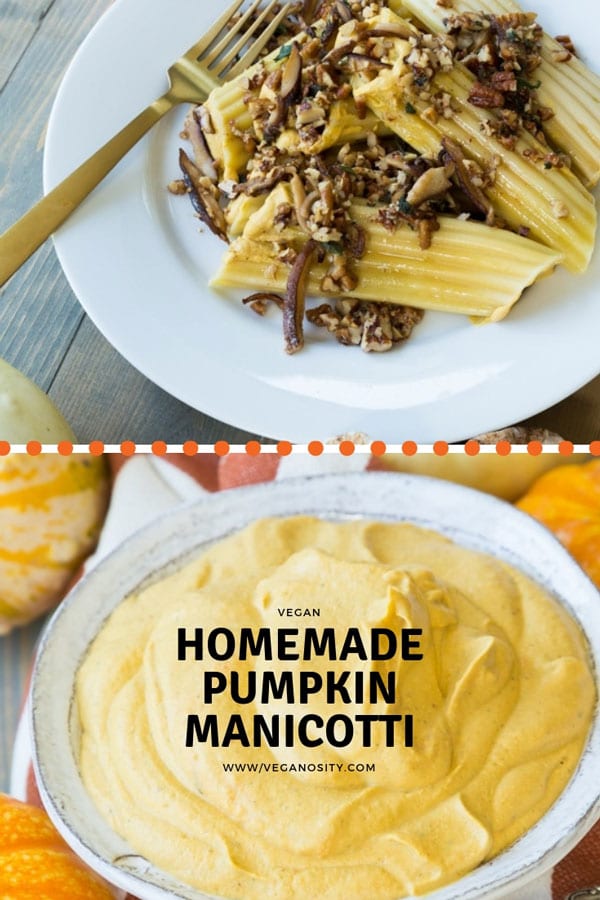