Vegan Chocolate Chip Pumpkin Blondies! These gluten-free and refined sugar-free pumpkin blondies are filled with warm pumpkin spices and whole foods, such as rolled oats and chickpeas. It may sound strange to make blondies with beans, but trust us, they’re delicious. So are our Spicy Black Bean Brownies if you’re looking for a double dose of easy vegan desserts. 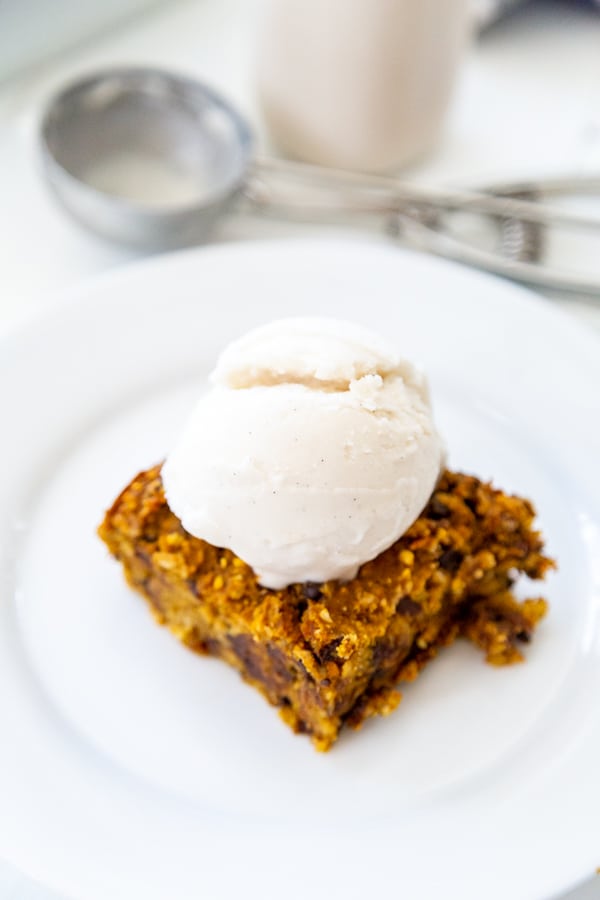 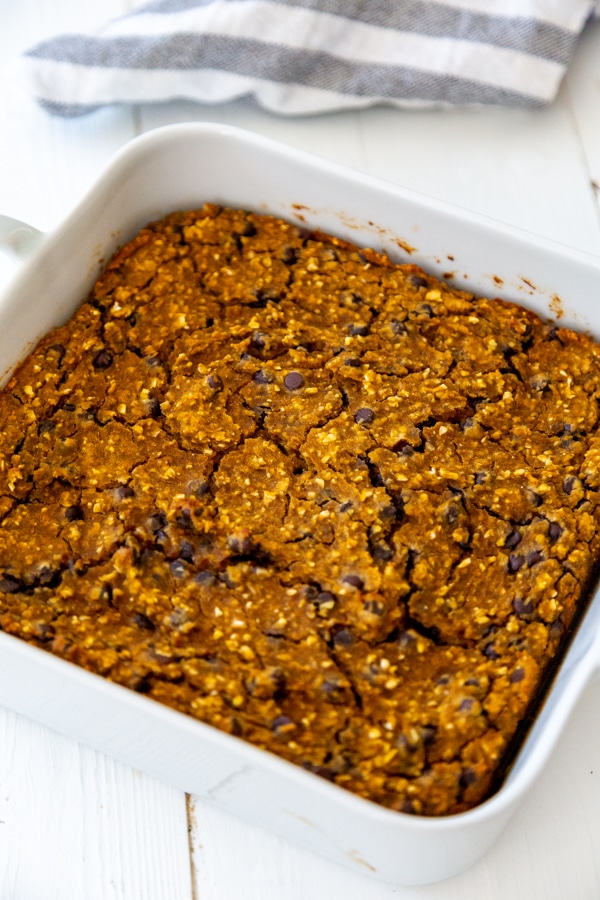 Let’s slide right into September with a pumpkin dessert recipe, shall we?

You know you’ve been waiting for it since Starbucks launched their pumpkin spice coffee in August.

However, here we are in September, and we think it’s perfectly fine to bust out this divine vegan pumpkin blondies recipe.

After all, it’s a short season, so we may as well make the most of it. 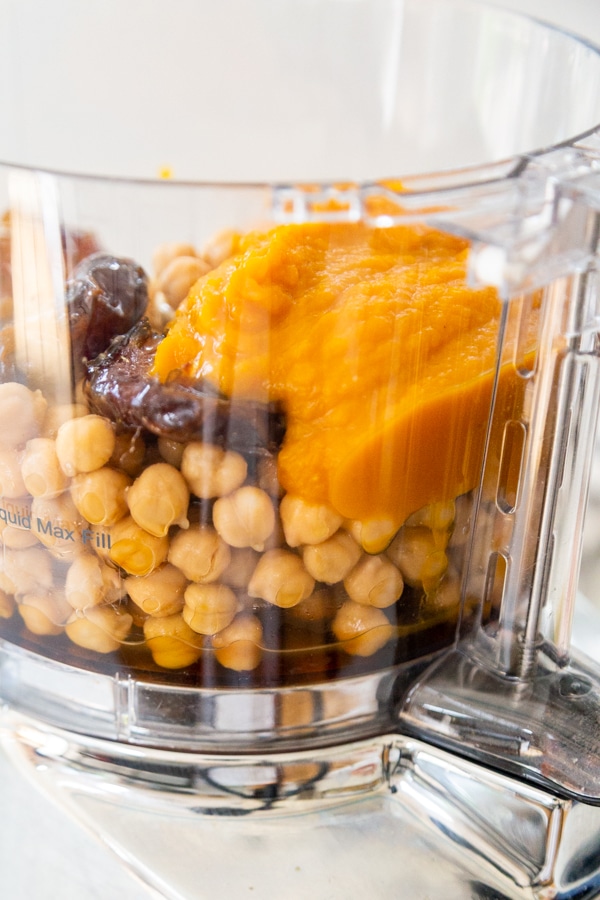 A GLUTEN-FREE PUMPKIN BAR RECIPE THAT’S MADE WITH CHICKPEAS.

Now before you close your computer or turn off your phone, hear us out.

We know that it sounds strange to make a dessert with beans.

You’re probably imagining an earthy flavor and a weird texture. We get it.

Would we do that to you? Of course not!

These easy pumpkin blondies are so delicious, and the texture is exactly right.

They’re also made with healthy whole foods. That’s right, a healthier pumpkin dessert to get you through fall.

WHAT INGREDIENTS ARE IN CHICKPEA PUMPKIN BLONDIES? 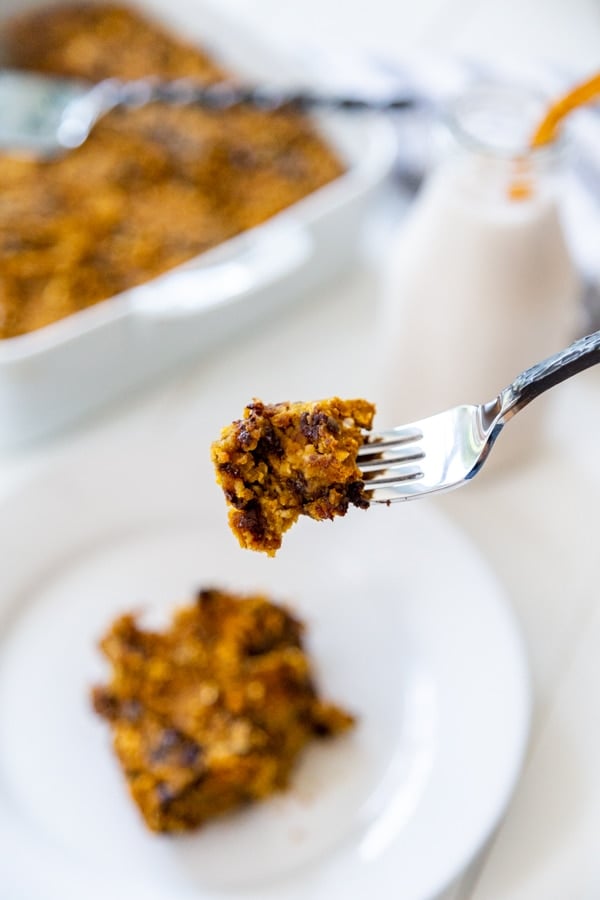 HOW DO YOU MAKE VEGAN AND GLUTEN-FREE PUMPKIN BLONDIES?

You’ll need a food processor for this recipe. It’s the only way to get the chickpeas to break down the way They’re supposed to.

Preheat the oven to 350° and lightly grease a 9-inch square cake pan.

STEP TWO
Grind the oats in the food processor until it’s a powdery flour.

Add the oat flour to a large mixing bowl and whisk in the baking powder, baking soda, salt, and spices until they’re completely combined.

Put the chickpeas and melted coconut oil in the food processor and puree until smooth and creamy.

There shouldn’t be any visible pieces of the chickpeas.

Add the pumpkin puree, dates, vanilla, and maple syrup and process until all of the ingredients are completely blended.

Remove the blade from the food processor and using a spatula, scrape the pumpkin mixture into the bowl with the flour.

Stir in the chocolate chips until just combined. Don’t over mix it.

Spread the mixture evenly into the prepared dish and bake for 25 to 30 minutes or until a toothpick comes out clean and the surface is lightly cracked. Let cool on a rack.

Because there’s a lot of moisture in these from the pumpkin, we recommend storing them in an air-tight container in the refrigerator for up to 5 days.

You can also freeze them in a freezer-safe container for up to 2 months. Defrost in the refrigerator. 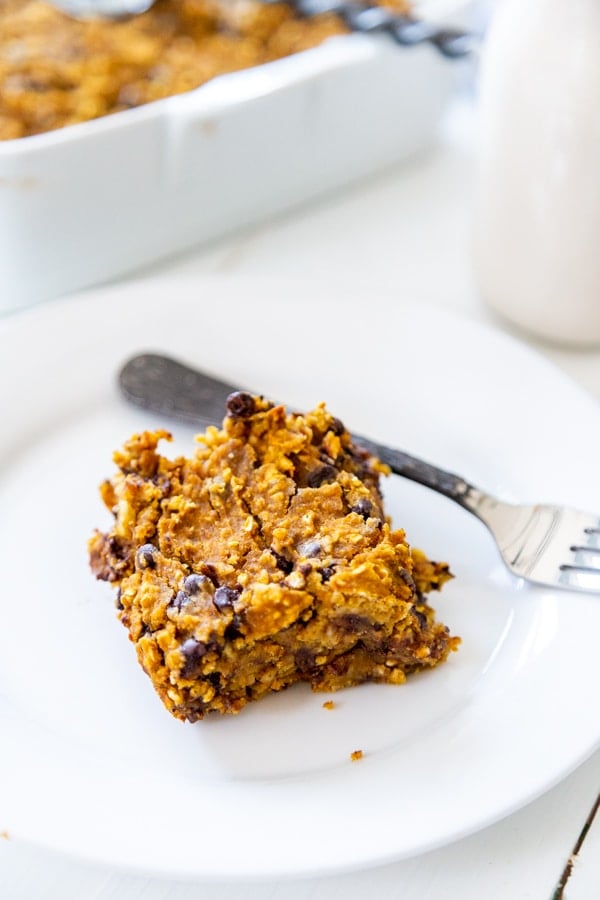 Make our pumpkin blondies recipe and let us know what you think. We love to hear from you! And, don’t forget to take a picture of your gorgeous creation and tag us @veganosity on Instagram. 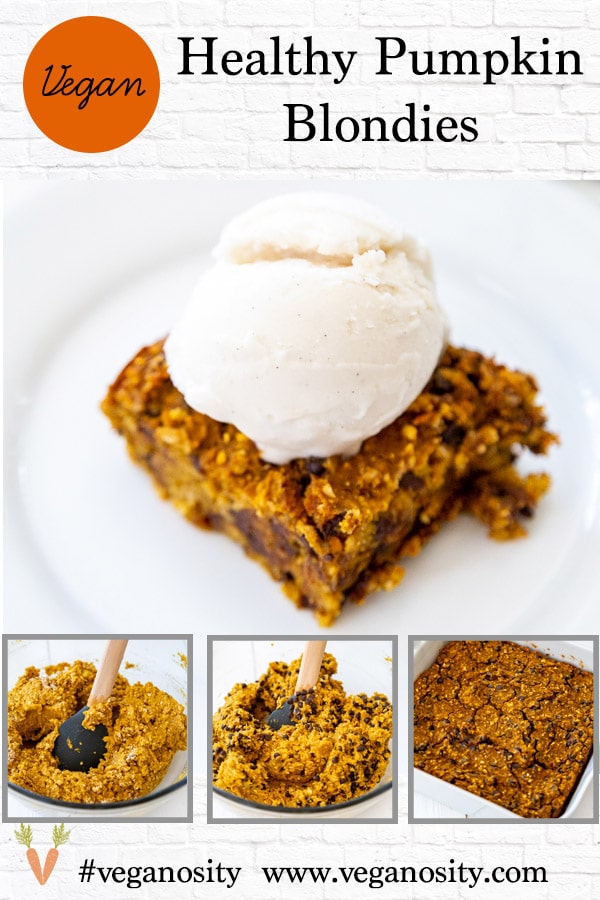 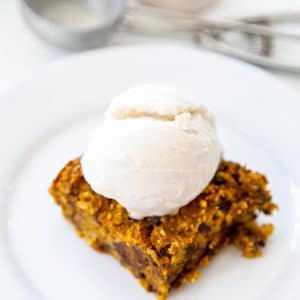