Our vegan red velvet skull cakes recipe is a fun and delicious way to celebrate Halloween. They’re a cross between skull cupcakes and a cake. In fact, if you’re celebrating a birthday, instead of one big cake, you can make a bunch of skull birthday cakes so everyone can have their own. Make our Vegan Mummy Cupcakes to go with them for a fun Halloween dessert party. 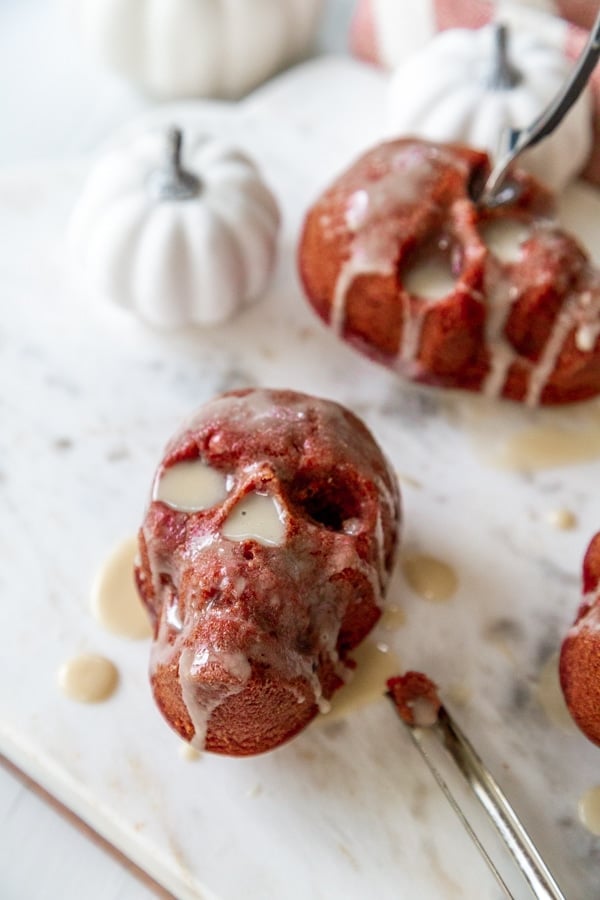 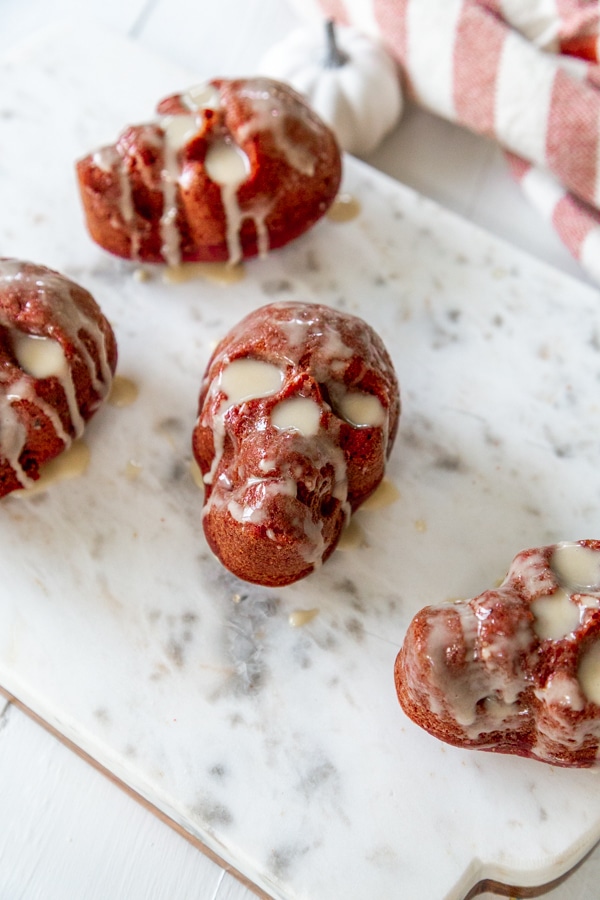 If you’re looking for a dairy-free red velvet cake recipe, you’ve come to the right place, because our vegan red velvet skull cakes are amazing!

Our red velvet cake recipe is eggless and has no buttermilk. Instead, we make a dairy-free buttermilk with lemon juice and plant-based milk.

It’s a delicious and easy cake recipe that has a perfect crumb and it’s just like the Southern red velvet cake that we used to make before we were vegan.

WHAT IS RED VELVET CAKE AND WHAT DOES IT TASTE LIKE?

Its color comes from food coloring, or you can use beet powder. We’ve tested several plant-based food dyes and here’s what we’ve found:

For some reason, plant-based dyes start out red, but once they’re baked they lose their vibrant color.

Instead of a bright red cake, we end up with a light reddish brown from the cocoa powder. It’s not very pretty.

Red velvet cake has a light chocolate flavor with a bit of acid from the vegan buttermilk and the vinegar.

It’s traditionally frosted with a cream cheese frosting; however, we used a sweet glaze for this skull cake recipe. 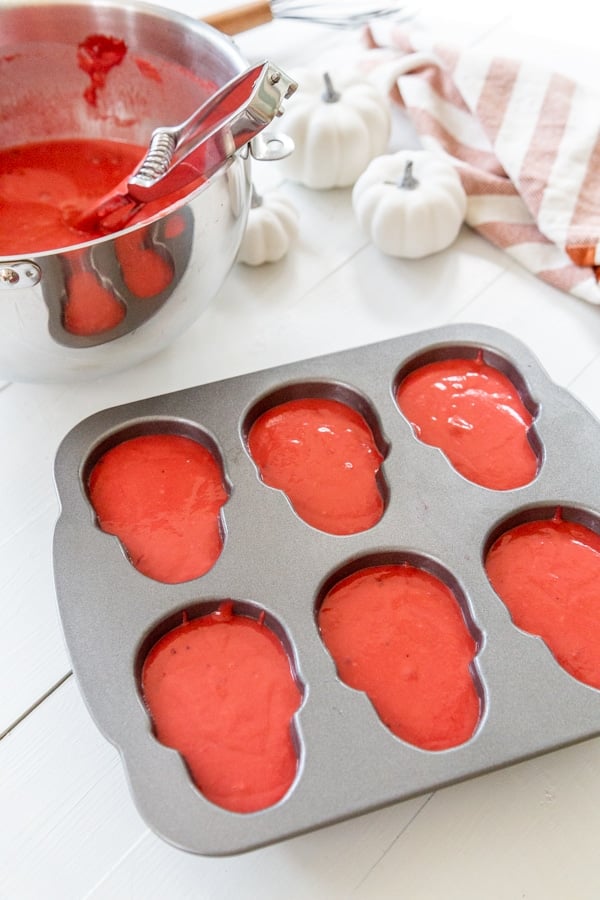 HOW DO YOU MAKE RED VELVET SKULL CAKES?

Pour the wet oil mixture into the dry mixture and beat with a paddle attachment until just combined. Slowly add the boiling water until combined. The batter will be thin, not thick.

Fill each skull mold until almost full. Bake for approximately 45 minutes, or until a wooden toothpick comes out clean when inserted in the center.

Cool in the pan for 10 minutes and then invert onto a cooling rack until they’re completely cool.

When the cakes are completely cooled. Make the icing/glaze and drizzle over the tops of the cakes and let it pool in the eye sockets and nose.

WHY DO YOU PUT BOILING WATER IN CAKE BATTER?

My grandmother and mother always added one cup of boiling water to their cake recipes, and for most recipes, I do, too.

They always said that it makes the cake perfectly moist.

I’ve done a lot of research on this and I believe it.

As a recipe creator, I love to read other food bloggers recipes, and one thing that I found when looking over this recipe was that almost all of the recipes didn’t have enough liquid to even make it a cake batter.

I even tried making one from a well know blogger (who shall go unnamed), and the batter was as thick as a quick bread batter.

Needless to say, I had to add more liquid to get the cake batter to pour into the pan, and it turned out too dense and dry.

Trust me when I say, boiling water is key to a perfectly moist cake batter. 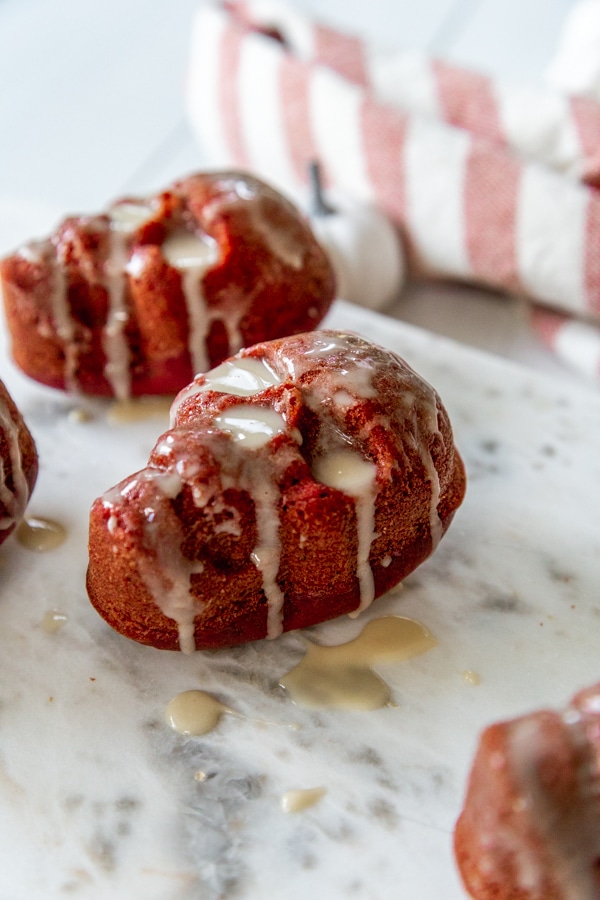 WHAT RED FOOD DYE IS VEGAN?

As I mentioned above, we have tried several plant-based food dyes to make colorful baked goods, because we don’t like using artificial anything.

The frustrating thing is, when those dyes hit the heat of the oven they start to fade, resulting in dull colors instead of vibrant.

McCormick red food dye doesn’t use natural red no. 4 dye, or cochineal, which is made with crushed beetles.

Red 40 and 3 are made from chemicals. Not great, we know, but if you have one slice of cake a year, it’s not something we worry about.

Red velvet cake makes such a pretty presentation, and it’s perfect for these skull cakes. Just don’t eat more than one skull cake and you’ll be fine. LOL!

You can also use beet powder, but again, we don’t think that it turns out as vibrant.

If you want to skip the dye altogether, feel free. 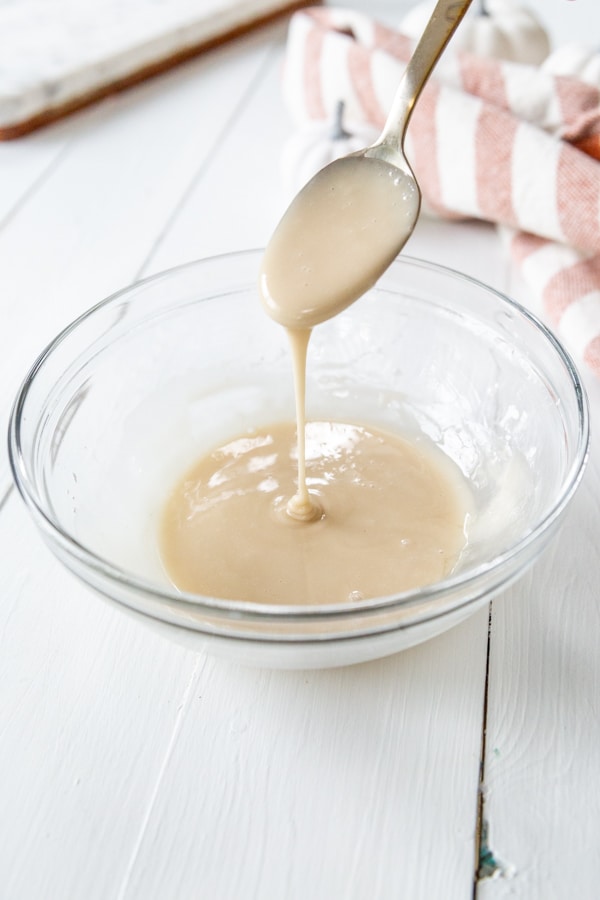 HOW DO YOU MAKE A SUGAR GLAZE FOR CAKE?

This is the easiest type of cake frosting to make, because it’s made with two simple ingredients, powdered sugar and plant-based milk.

All you’ll need to do is stir a small amount of plant milk into the sugar until you get the consistency you’re looking for.

For this red velvet cake recipe, we wanted the glaze to be thin enough to drip down the sides of the cakes and pool in the eye and nose sockets.

Start slow and add more liquid as needed. If you add to much liquid and it’s too runny, add a bit more sugar.

It’s hard to mess this up.

WHERE DO YOU BUY A SKULL CAKE PAN?

We originally bought our skull pan from Williams Sonoma, and now you can get it delivered to your house from Amazon.

Here are several styles of skull cake pans for you to choose from: 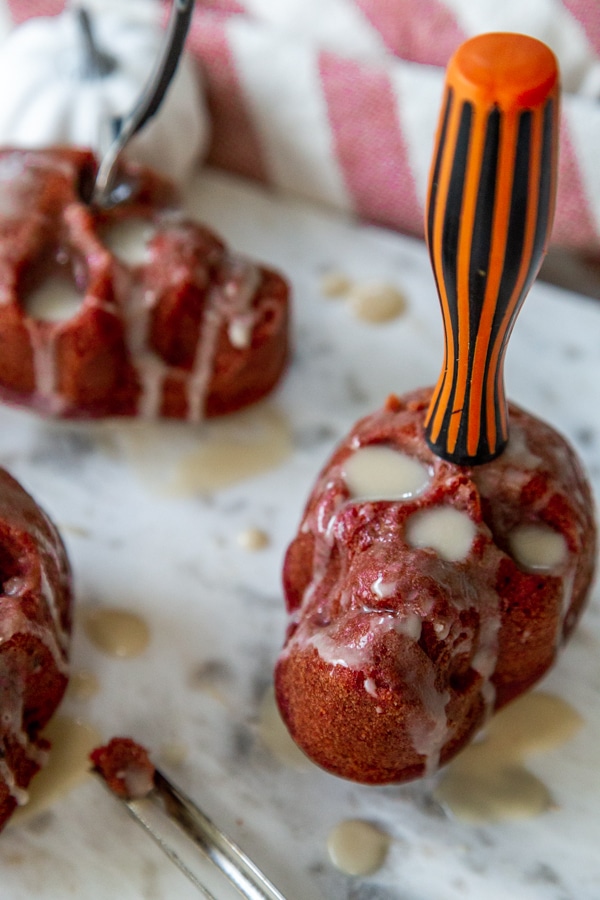 Make our vegan red velvet skull cake recipe and let us know what you think. We love to hear from you! And, don’t forget to take a picture of your gorgeous creation and tag us @veganosity on Instagram. 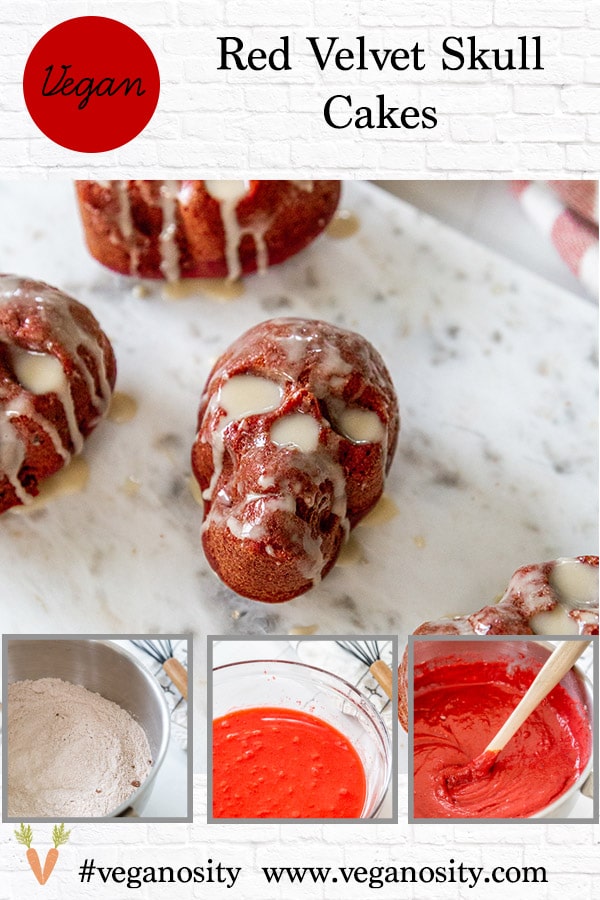 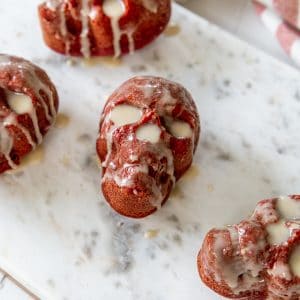 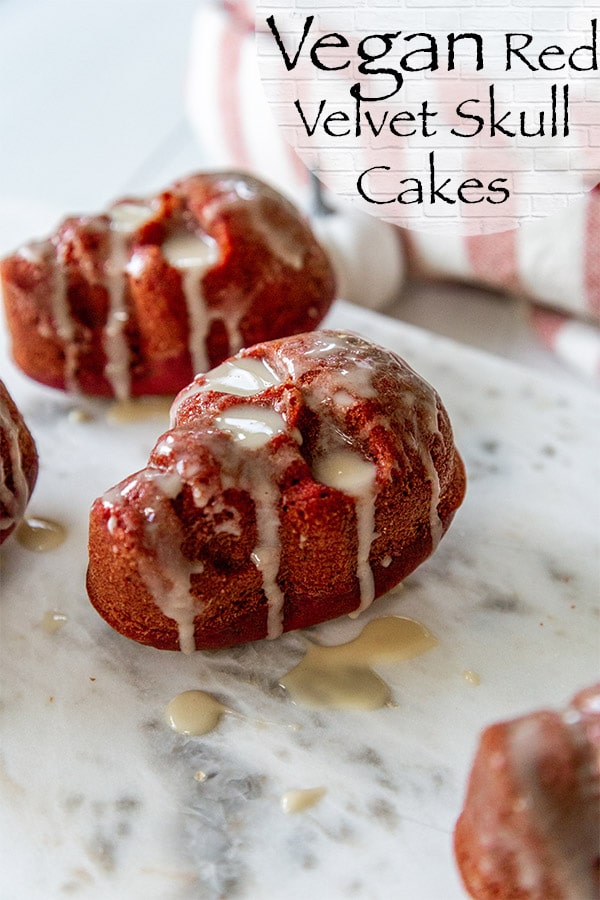