This shop has been compensated by Collective Bias, Inc. and its advertiser. All opinions are mine alone. #SameSilkySmoothTaste #CollectiveBias 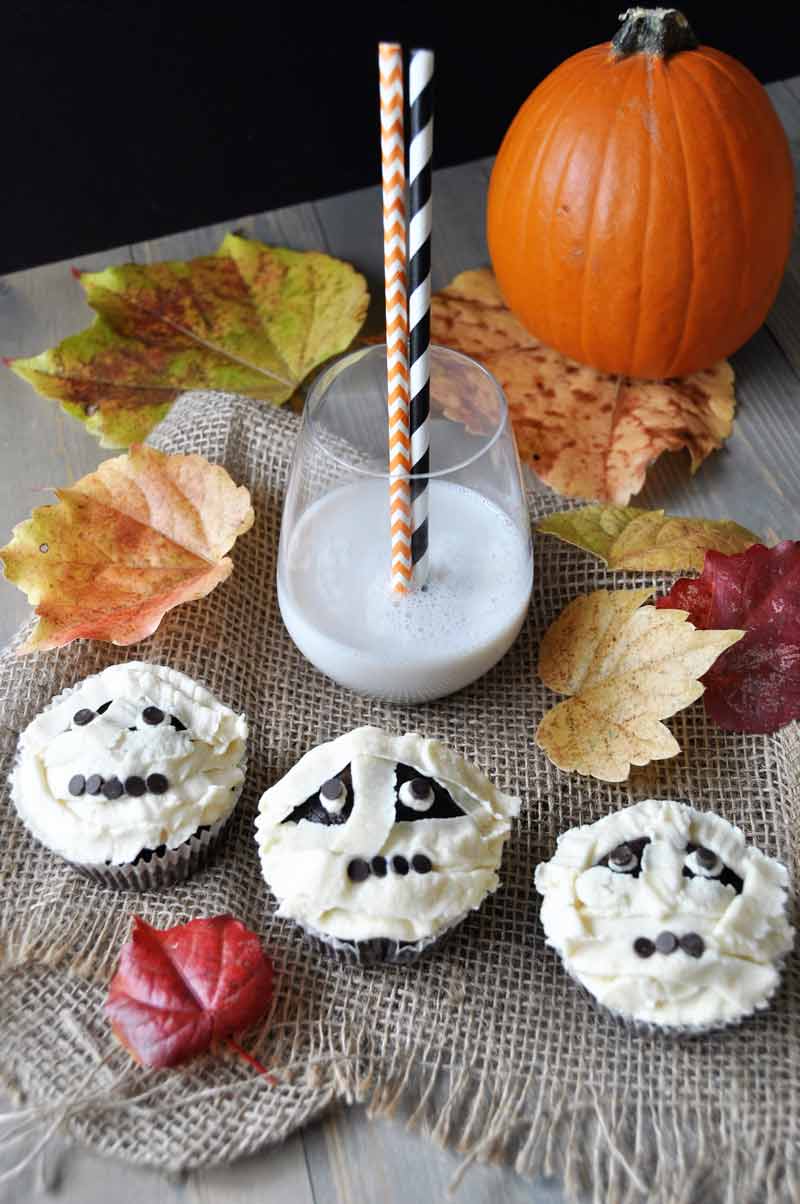 One of my favorite holidays is Halloween. I love that it takes place during one of my favorite seasons (fall), that it’s fun and a little spooky, that it gives you and excuse to throw a costume party, and that you get to eat cupcakes! Isn’t that the most exciting part of any holiday?

Baking, decorating, and eating cupcakes is almost definitely the best part of any celebration. Don’t you think?

When my kids were little we loved to make festive treats for Halloween. I mean, let’s be honest, a good cupcake is SO much better than a candy bar. It was so much fun letting them mix the dry ingredients, beat the batter, and sift the powdered sugar for the buttercream frosting. But the best part of making homemade cupcakes was watching them decorate them. Is there anything more rewarding than seeing the concentration and creativity in your kid’s eyes as they create their very own culinary masterpieces? I think not.

My kids may be grownups now, but that isn’t going to stop me from whipping up a batch of vegan chocolate mummy cupcakes for my husband. We’ll eat a few and I’ll deliver the rest to my friend’s little guys who live down the street. The perfect compromise. 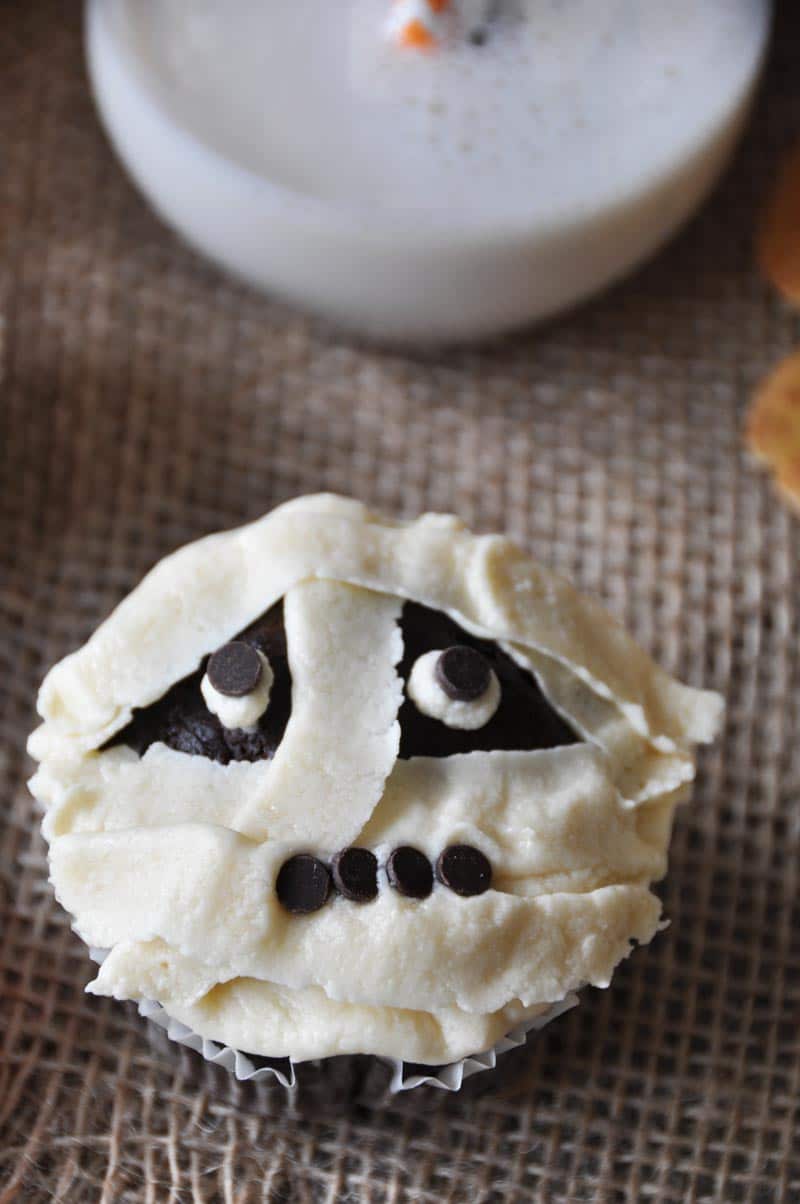 When I chose to go vegan, almost three years ago, I was concerned that my days of baking drool worthy cupcakes might be over. I wasn’t sure how I was going to replicate the same texture and density of the cupcakes that I used to make with dairy. Fortunately, I quickly discovered that Silk plant-based milk was all that I needed to make the same delicious cupcakes that I had always made.

I usually use Silk almond milk for most of my baking, but I love the combination of chocolate and coconut so I decided to use their coconut milk for a change of pace. The texture of the cupcakes turned out exactly as I had expected them to, moist, light, spongy, and delicious. I also used it for the vanilla buttercream frosting and it turned out perfect. 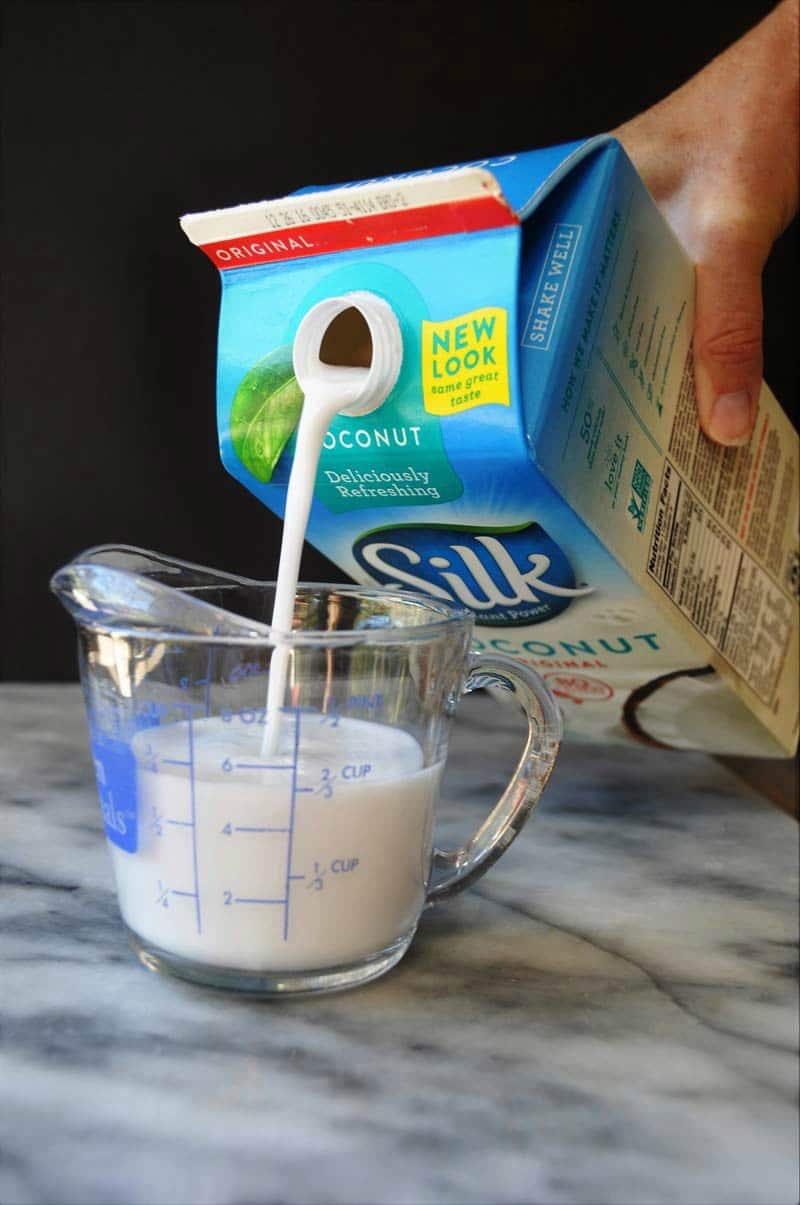 The flavor of  Silk coconut milk has a subtle nutty flavor, it won’t take over the taste of the other ingredients in your recipe, and it’s dairy-free, gluten-free, and non-GMO. What more could you ask for? There’s still almost an entire carton left for me to enjoy, so I’ll be adding it to my morning coffee, smoothies, and oatmeal. It’s also wonderful in creamy soups, like this one. And of course, it pairs perfectly with chocolate vegan mummy cupcakes. 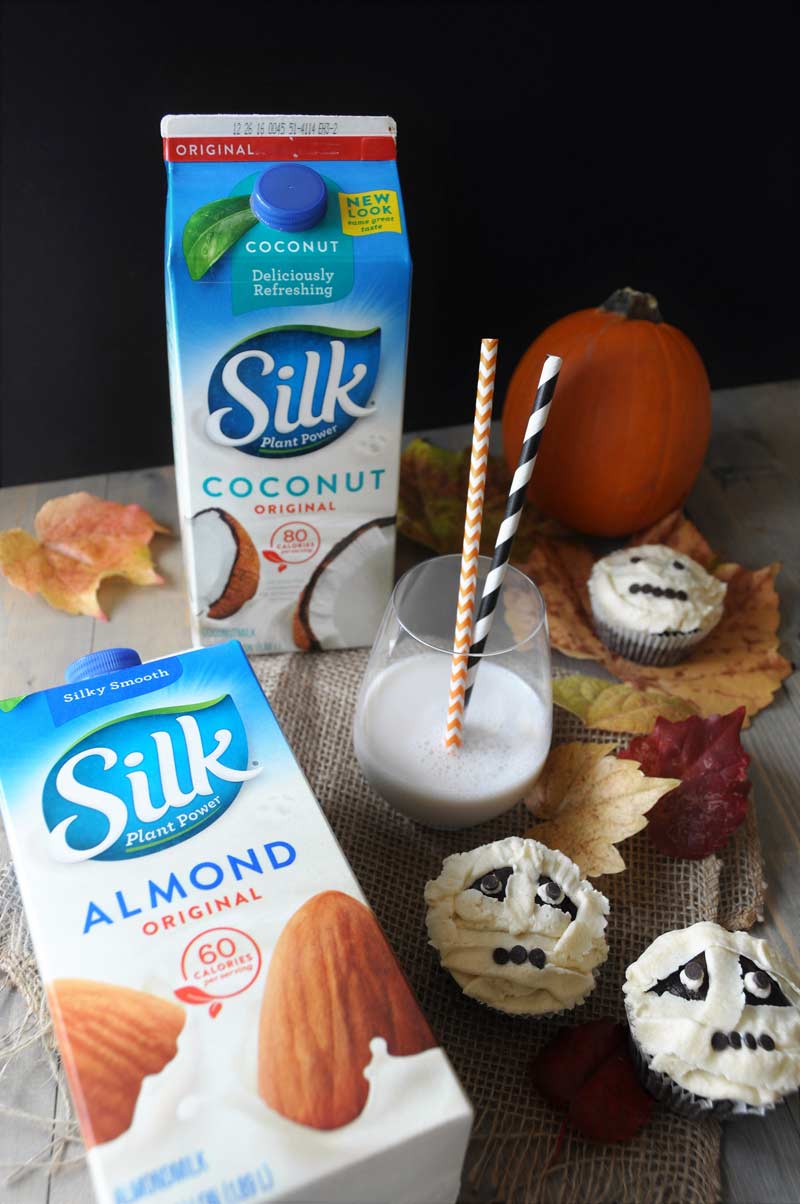 How to Make Vegan Chocolate Cupcakes 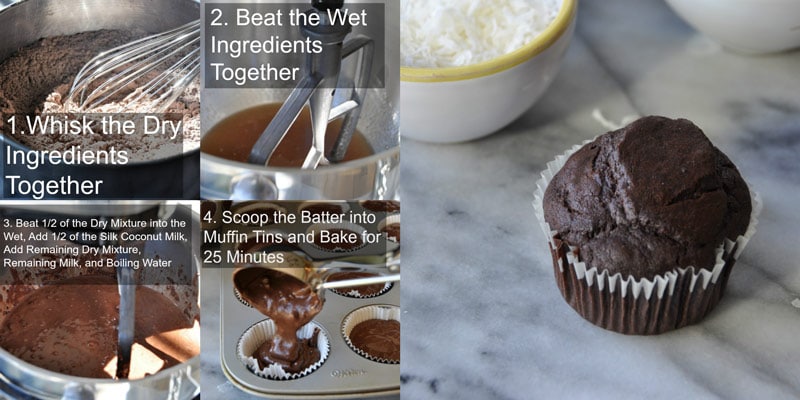 The first thing that you’ll want to do is line a muffin tin with cupcake papers. I used white, because mummy cloth is white.

Next, whisk the dry ingredients together until well combined. The flour mixture will look light and airy.

Now beat the wet ingredients in a large mixing bowl until smooth and creamy.

Carefully add the boiling water and beat on a slow speed until just combined. The batter will be thin.

Fill the muffin tins three quarters of the way full and bake for approximately twenty-five minutes or until a wooden toothpick comes out clean when inserted in the center of a cupcake.

How to Decorate Mummy Cupcakes

When the chocolate cupcakes are completely cool it’s time to decorate.

Attach a thin flat pastry tip on a pastry bag and fill half of the bag.

Squeeze the air out by pushing the frosting toward the tip, then twist the top of the bag closed.

Squeeze the frosting out and cover the bottom edge of the cupcake and overlap as you make your way toward the top. Leave room for the eyes. When the entire (except for the space for the eyes) cupcake is covered put two dots of frosting where the eyes should go and put a mini chocolate chip in the center.

How cute are these?

Baking dairy-free and vegan doesn’t have to be hard. My cakes and cookies taste the same as they always have, only I use Silk plant-based milks to cook with. By the way, don’t you love their new packaging? It’s so clean and modern. Love it! 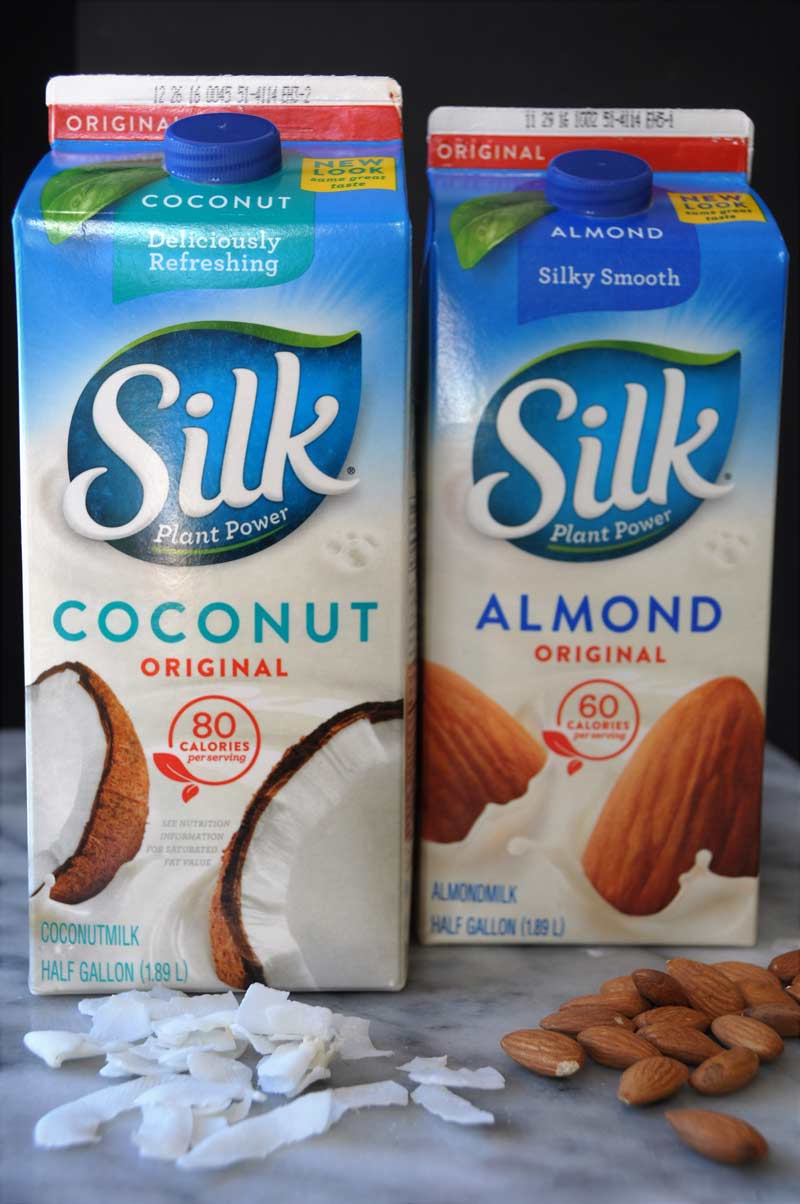 If you’re ready to bake some Halloween mummy cupcakes, do yourself a favor and bake them with Silk Coconut Milk. It has fifty percent more calcium than milk and it’s only eighty calories per cup! What’s not to love?

Send me a picture of your mummy cupcakes! I love seeing your creative spin on my recipes.

« 6 Ingredient 5 Minute Roasted Red Pepper Hummus
What This Vegan Ate to Train for a Marathon, and Other Things »

Healthy vegan recipes that will keep you strong, fit, and satisfied.
39shares