Smother mashed potatoes with our mouthwatering vegan porcini mushroom gravy. It's so silky, rich and savory that even meat eaters love it! Made with just 10 ingredients, it's dairy-free, meat-free, and has a gluten-free option. 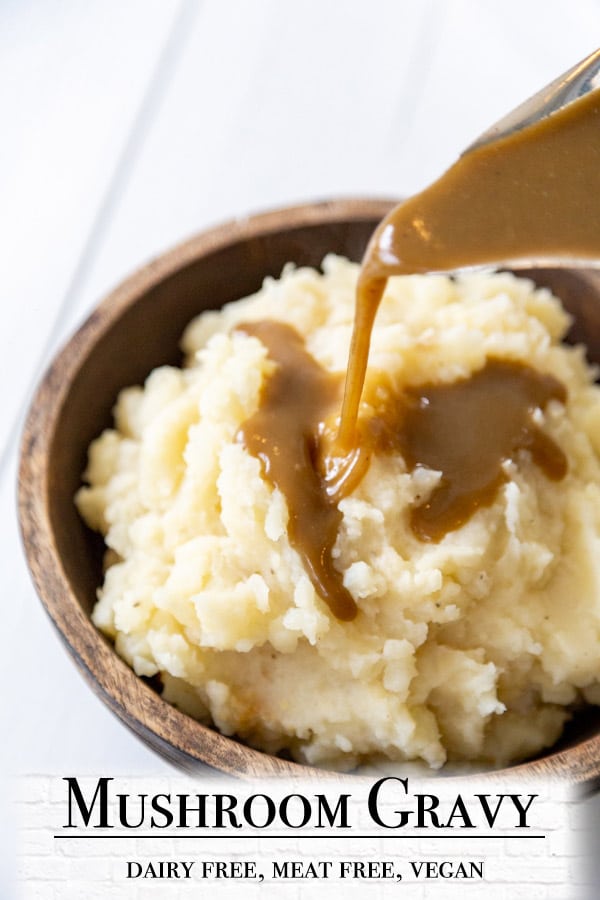 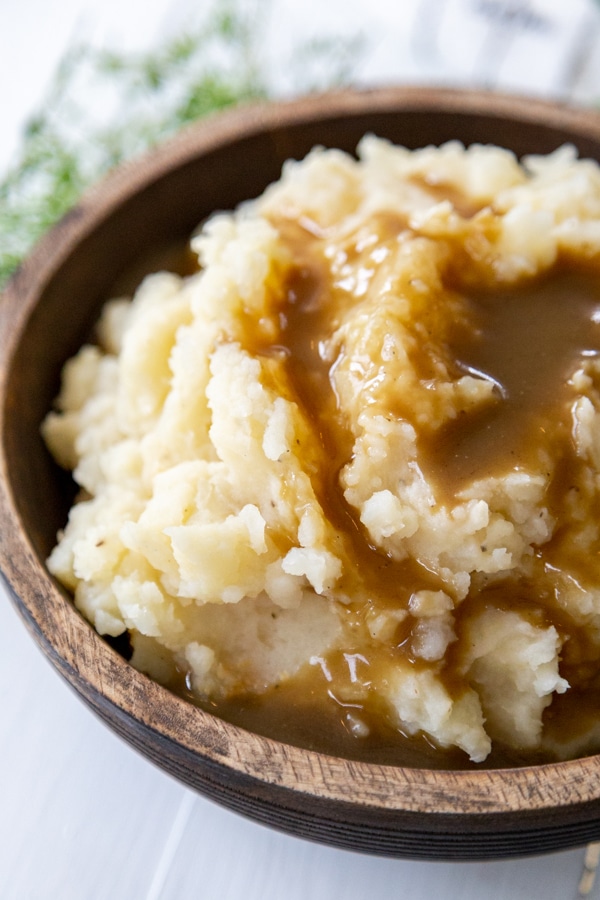 When you're craving a big bowl of mashed potatoes, or biscuits, or a good lentil loaf, our red wine and mushroom gravy is exactly what you need to go with it.

This vegetarian mushroom gravy recipe is so rich and delicious. It has a wonderful umami flavor, thanks to the  dried porcini and portobello mushrooms. And the fresh herbs balance the earthiness of the mushrooms beautifully.

Additionally, because we strain the pieces of the mushrooms out of the gravy, we think that those who don't like mushrooms because of their texture, will love this gravy.

Give it a try and let us know if we're right.

HOW TO PREPARE DRIED PORCINI MUSHROOMS FOR VEGAN MUSHROOM GRAVY

To make this stellar gravy you'll want to start with the dried porcini mushrooms.

We use dried because they have a concentrated flavor that adds so much more to the gravy than fresh would.

2. While the mushrooms are cooking start sautéing the onion, shallot, and garlic in the oil (feel free to use water or broth to cook these, although the oil will give them more flavor). The combination of these ingredients will make your mouth water, and your house will smell soooo good!

Deglaze the pan with a few splashes of the no-chicken broth. It’s vegan, but it tastes like chicken broth.  You could use vegetable broth, but I really like this for making gravy.

3.Now add the Portobello mushrooms and cook them until they begin to release their water and start to brown. Once that happens you can pour the porcini mushrooms, along with the water they soaked in, into the pan.

Add the no-chicken broth and bring it to a boil. Reduce the heat to a simmer and cook for 15 minutes.

Are you ready to make gravy? Let's go.

HOW TO MAKE VEGAN MUSHROOM GRAVY

2.Add the flour mixture to the broth and whisk vigourously. Keep whisking until it thickens. Strain it into the bowl one more time to make sure that any stray pieces of flour that may remain don’t go into the gravy bowl.

Now pour it into a gravy boat and start smothering those potatoes!

NOTE: TO MAKE THIS GLUTEN-FREE MUSHROOM GRAVY, USE CORNSTARCH INSTEAD OF FLOUR TO THICKEN IT. 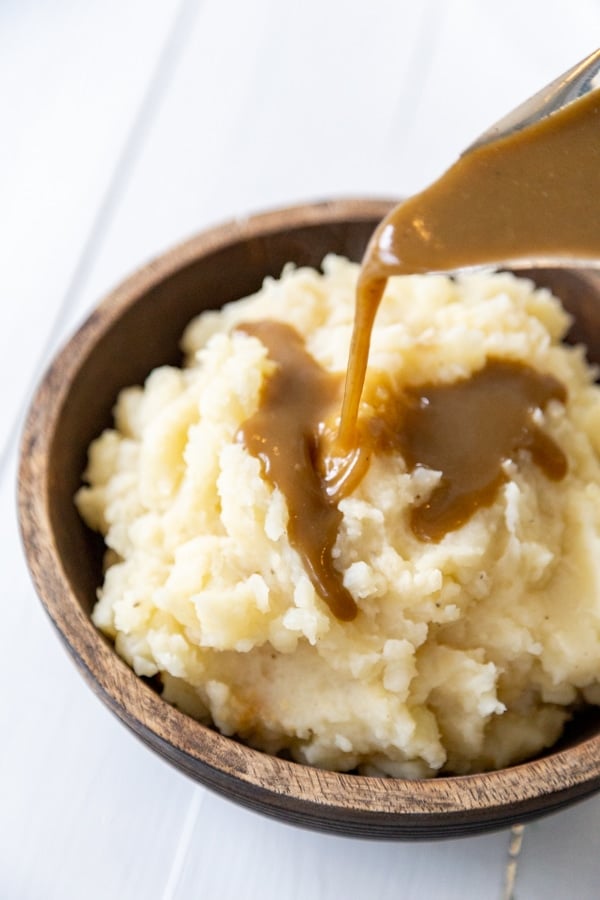 WHY MUSHROOM GRAVY IS BETTER

Before I went vegan I wasn’t a big fan of gravy. It was too greasy for me, you know, animal fat and all.

But this, this is different. It’s rich and creamy like gravy is supposed to be, but it has a lighter, fresher taste and texture.

Your non vegan friends will love this!

It’s also healthier. There isn’t anything in it that will clog your arteries. Who wouldn’t like that?

To make it even healthier, you can make this gravy without oil. Just cook the veggies in water or broth.

Because we used dried, then re-hydrated porcini mushrooms, the solids that are leftover may be a little tough. We recommend chopping the solids up into small pieces and putting them in pasta or a soup. 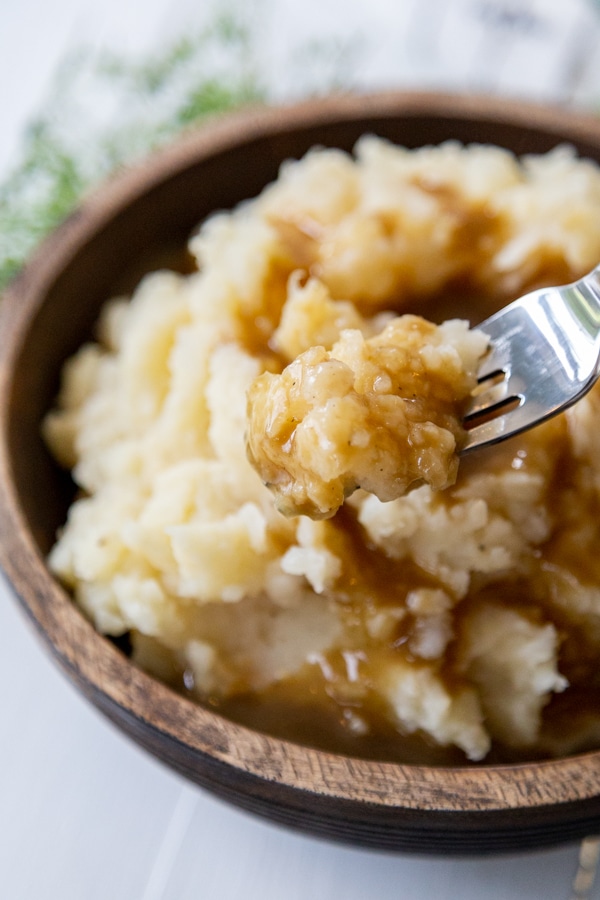 CAN YOU MAKE MUSHROOM GRAVY AHEAD OF TIME?

You can make it a day or two ahead of time. Be sure to store covered in the refrigerator.

If you want to freeze it, store it in an airtight, freezer safe container for up to 3 months.

WHAT TO SERVE WITH MUSHROOM GRAVY

Make our recipe and let us know what you think. We love to hear from you! And, don’t forget to take a picture of your gorgeous creation and tag us @veganosity on Instagram. 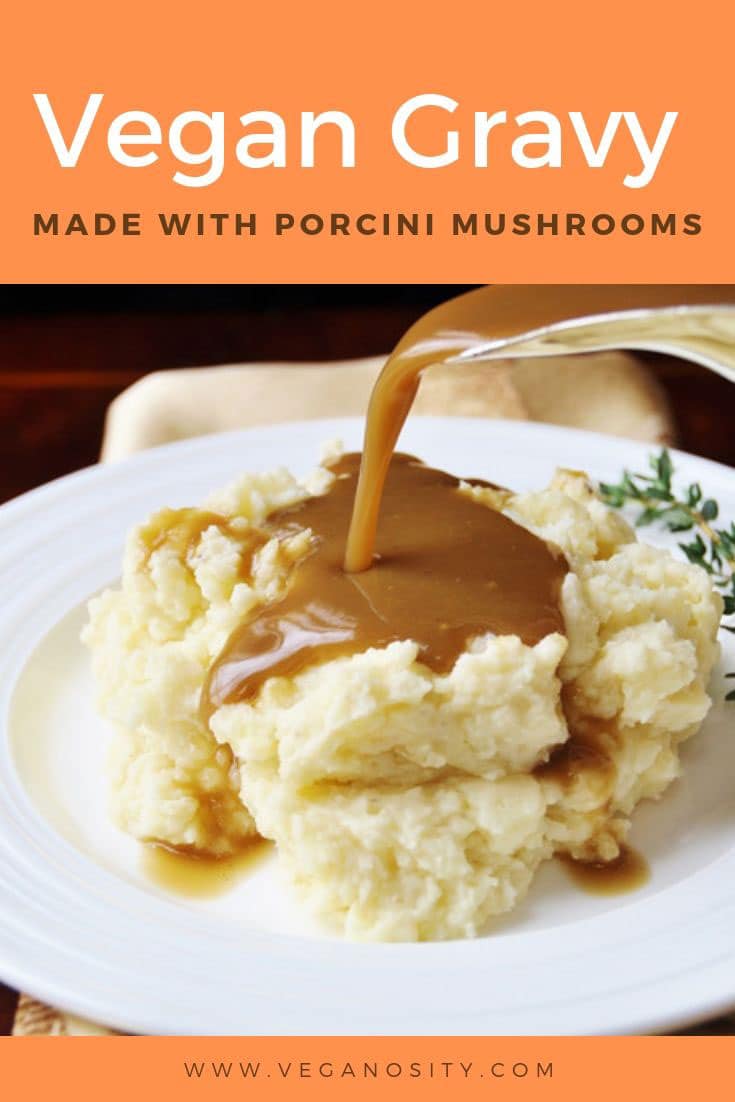