Easy Homemade Vegan French Onion Soup that tastes like traditional French onion soup, only this is made with vegetable stock and vegan mozzarella cheese. It has a rich and flavorful broth and gooey melted vegan mozzarella on top. SO GOOD! If you love caramelized onions as much as we do, this soup is going to rock your vegan life. So will our Onion Confit Tartlets and our Baked Onions with Fennel Breadcrumbs recipe. 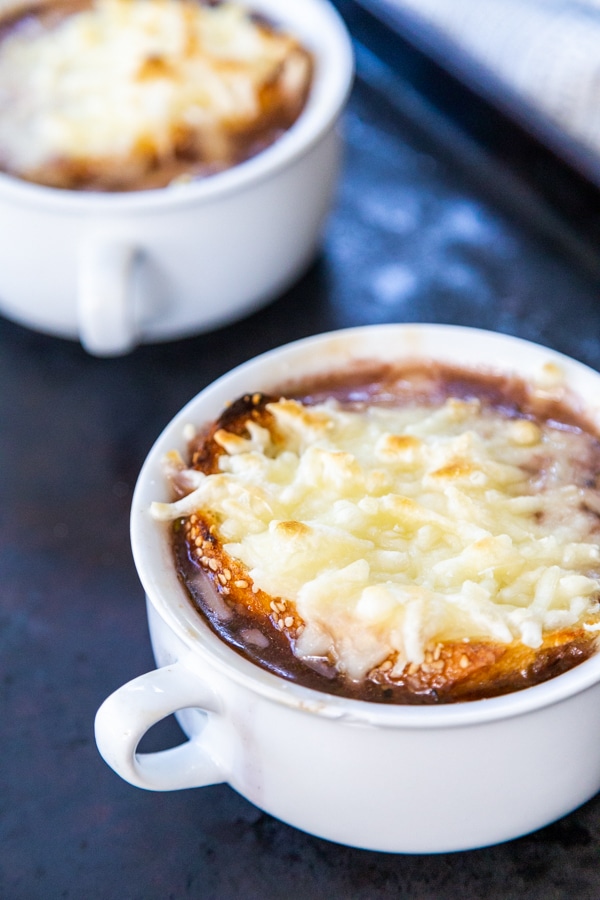 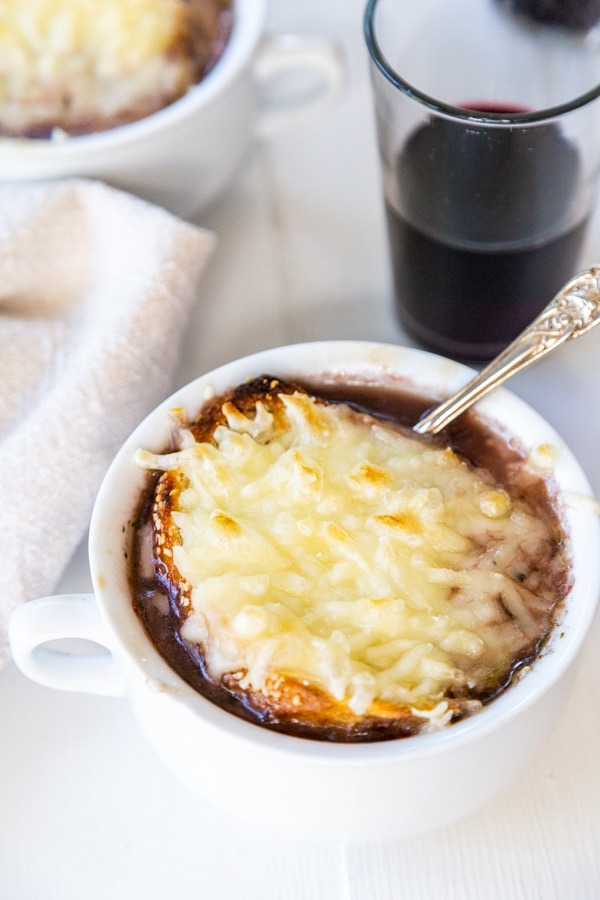 We’re not going to lie, when we went vegan (almost 6 years ago), we thought the days of making French onion soup were over.

Although we had used vegetable stock to make ours, because we didn’t eat beef or pork, we never thought that we could find a vegan mozzarella to layer over the soup and toasted bread.

Then we discovered that we could make our own plant-based mozzarella cheese and our lives were changed.

We’re so excited to share this easy French onion soup recipe with you, and can’t wait to hear what you think about it.

Add the word, French, to a recipe and people shy away. The French are known for creating complex and fancy foods that most home cooks are afraid to make.

Here’s the thing, this onion soup is SO easy to make!

The most time-consuming part is caramelizing the onions, but that only takes about 15 minutes, and the way they’ll make your kitchen smell is totally worth it.

Once the onions are ready, it’s all about adding ingredients and stirring. EASY! 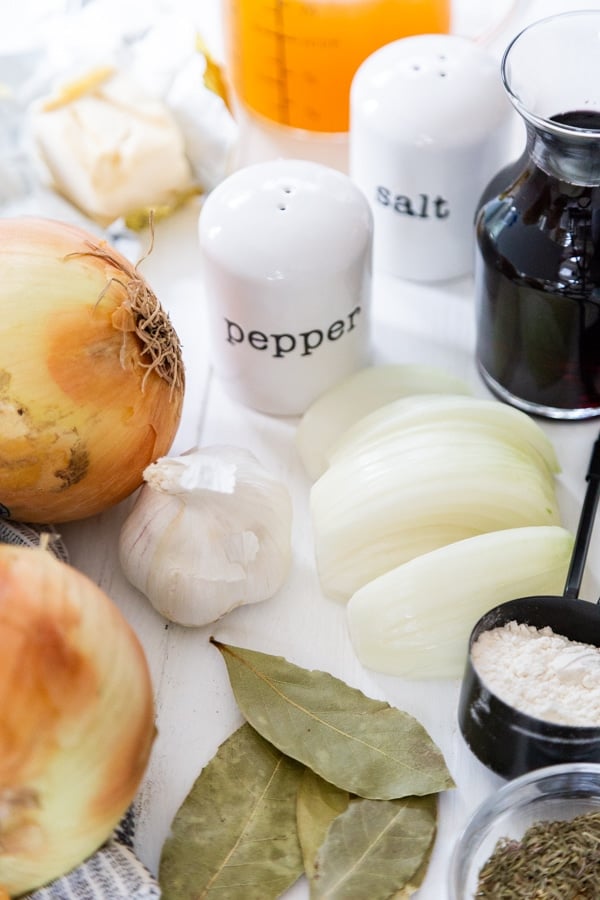 WHAT INGREDIENTS DO I NEED TO MAKE FRENCH ONION SOUP?

The ingredients in this homemade French onion soup recipe are super basic.

Toppings are optional. Feel free to eat the soup without if you want. 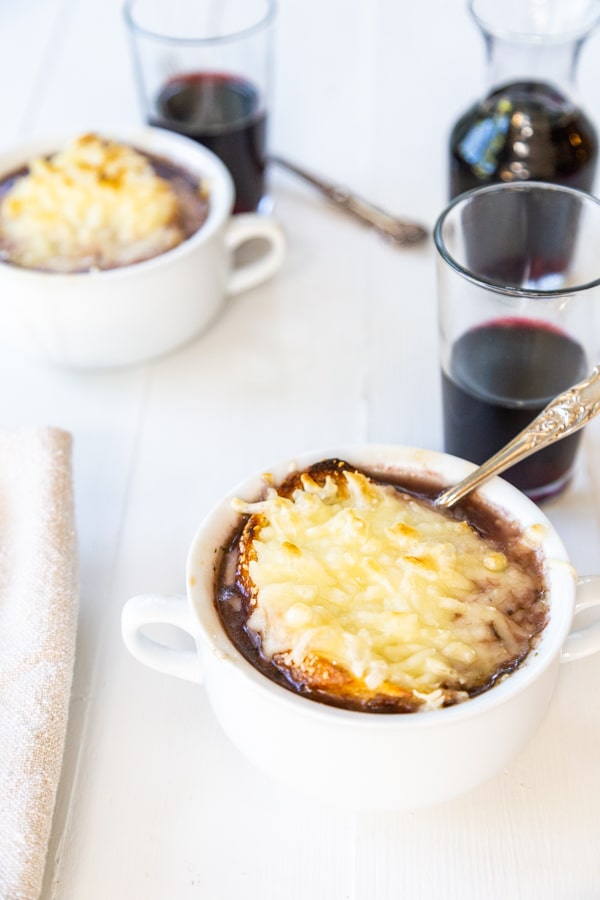 HOW DO YOU MAKE VEGAN FRENCH ONION SOUP?

The base of vegan or vegetarian French onion soup is the same, you swap out the beef broth for a plant-based broth.

To make it more flavorful we buy vegetable stock. Stock is richer than broth and works best for this soup.

You can also buy a no-beef bouillon if you like. Just follow the instructions to make 64 ounces of broth.

Caramelize the onions in the butter and olive oil.

This will take approximately 15 minutes and you’ll need to stir the onions often to prevent them from burning.

Add the wine or vinegar and stir. Cook until it reduces to a thick gravy like consistency.

Sprinkle the flour over the onions and stir to coat.

The flour adds body to the soup.

Add the garlic and cook for 1 minute, then add the stock/broth, thyme, and salt and pepper and bring it to a boil.

Reduce the heat and simmer for 15 minutes.

Fill the bowls with the soup and put a piece of toasted bread on top and then cover with shredded vegan mozzarella cheese.

Put the bowls under the broiler and let the cheese melt and bubble.

Make sure to watch the soup carefully when broiling so it doesn’t burn.

HOW TO MAKE QUICK CARAMELIZED ONIONS

There isn’t a way to hurry up caramelized onions. They need time.

If you turn the heat up, you’ll burn them. It’s just reality, my friend.

Having said that, it only takes 15 minutes to caramelize onions for French onion soup because you want them to be lightly caramelized.

If you’re caramelizing onions until they’re completely caramelized and a deep golden brown, you’ll need to set aside approximately 20 minutes.

Heat the vegan butter and olive oil over medium heat until the butter is just beginning to bubble.

Add the thinly sliced onions and stir to coat in the butter and oil.

NOTE: Make sure you slice the onions evenly so they cook evenly.

Cook the onions on medium heat until they soften then reduce the heat to medium-low and cook for approximately 15 to 20 minutes, depending on how brown you want them to be. 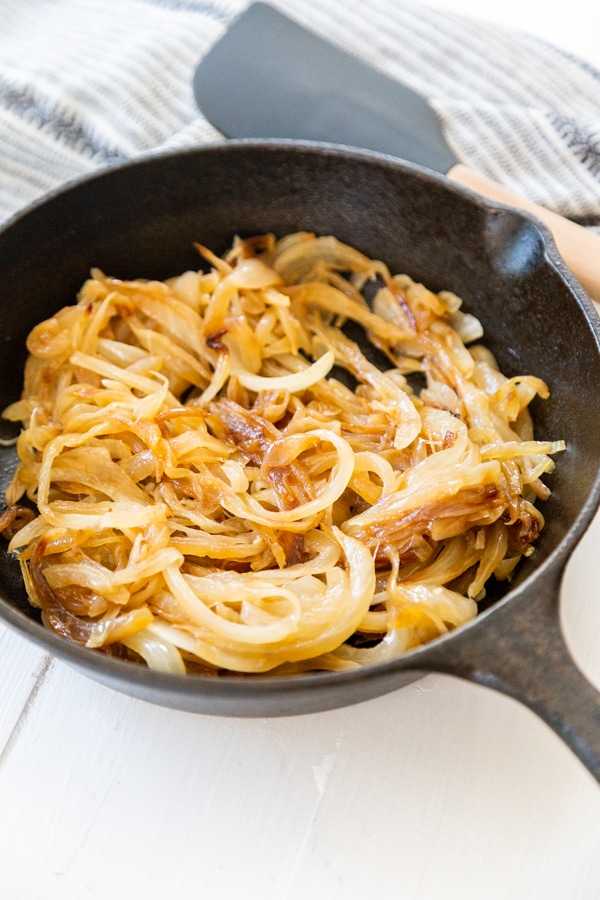 CAN YOU MAKE FRENCH ONION SOUP WITHOUT WINE?

Yes, you absolutely can.

If you don’t cook with alcohol, you can substitute a good balsamic vinegar for this recipe.

The wine adds a lovely flavor and acid to the soup, and although the flavor of balsamic isn’t quite like wine, it gets the job done.

You can also caramelize onions with balsamic vinegar whenever a recipe calls for wine.

Yes! Here are some of the nutrients they provide:

They're also low in sodium and are fat free. To read more about this amazing plant food, click HERE.

Make our homemade easy vegan French onion soup and let us know what you think. We love to hear from you! And, don’t forget to take a picture of your gorgeous creation and tag us @veganosity on Instagram. 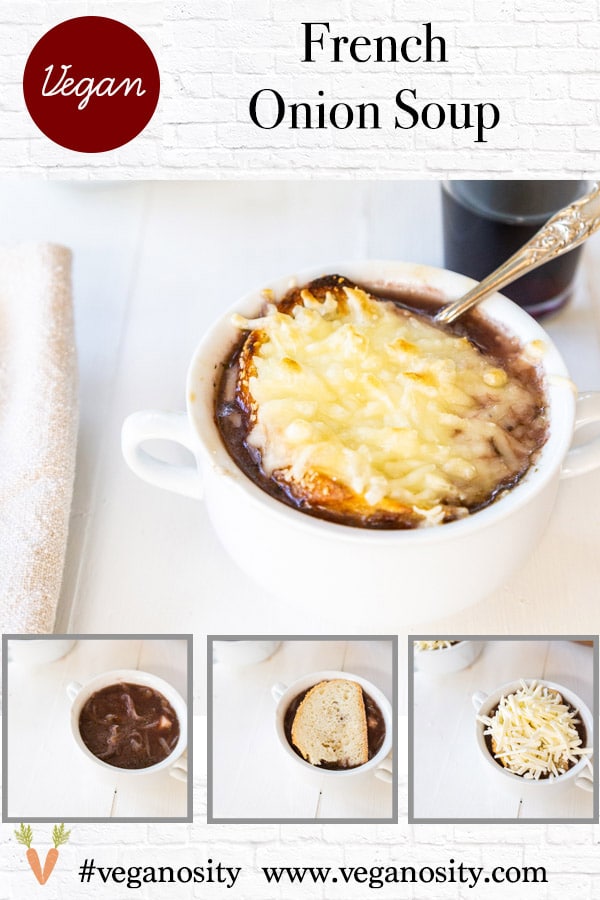 NUTRITION DISCLAIMER We use Violife shredded vegan mozzarella or we shred Miyoko’s vegan mozz. You can also make your own. Click HERE for the recipe. 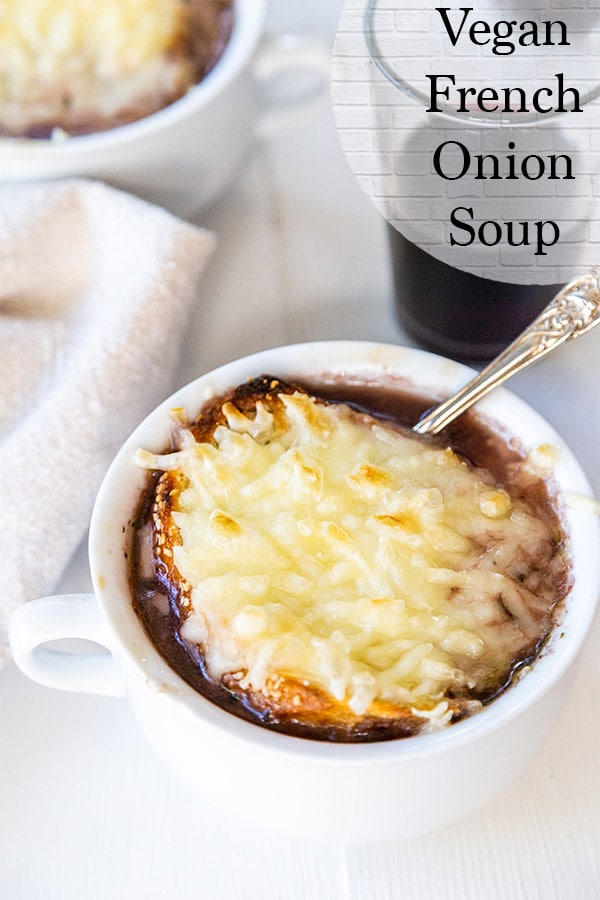