Our vegan potato pancakes, otherwise known as latkes, are made with just a few basic ingredients, and they’re so delicious. Crispy on the outside and tender on the inside, they’re perfect for breakfast, lunch, or dinner. Serve them with our vegan breakfast sausage or our tofu bacon. 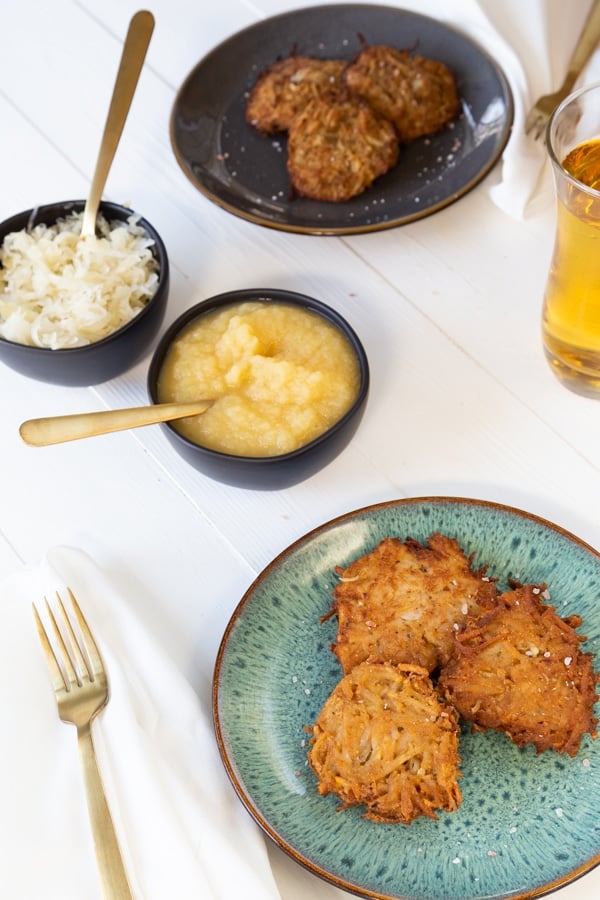 Welcome to Veganosity, where we recreate your favorite comfort foods into a vegan version.

We’re so happy you’re here, and we encourage you to scroll through our menu bar or type in any recipe that you’re looking for in our search bar.

If you don’t find the recipe you’re looking for, please email us and ask us to create it for you. We’re always up for a challenge.

Even though this is a straightforward and easy recipe, we want to help you make the BEST potato pancakes you’ve ever eaten, so we’re sharing some things that we think will help you, such as:

What to serve them with

Although you can use any kind of potato you want, even sweet potatoes, we like to use Russet potatoes for this recipe.

Russet potatoes have a high starch content, which works as a binder.

So, normal potato pancakes typically use a bunch of ingredients and cooking methods that aren’t particularly healthy.

Lucky for you, we’re giving you two options here: the decadent version and the healthier version!

All you have to do is preheat your oven to 425°F (218°C) and place the pancakes on your baking sheet. Pop the pancakes in the oven and bake for twelve minutes per side!

In addition to giving you an oil-free cooking option, we’ve also made this recipe gluten-free!

Yes, we’re aware that just because something is gluten-free it doesn’t necessarily mean that it’s healthier. However, using a more whole-foods flour rather than a bleached white flour seemed like the better option.

In this case, we chose to use almond flour. Not only does it add more flavor than white flour, it’s also a great source of vitamin E, magnesium, and has even been suggested to lower cholesterol and blood pressure! 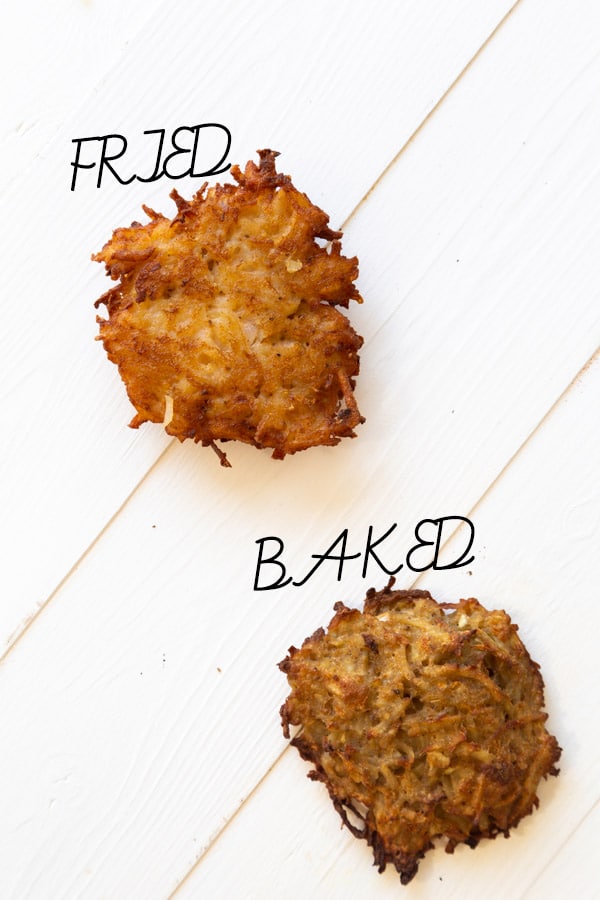 How to Make Them

To start, you’ll need to grate the onions on a box grater and set them aside. Fair warning, this definitely burned my eyes (granted, they’re pretty sensitive) so be warned and plan accordingly.

We use a box grater for the onions so our food processor doesn’t smell.

Hint: refrigerate the onions the night before and you won’t look like you’ve been watching the end of The Notebook. 😉 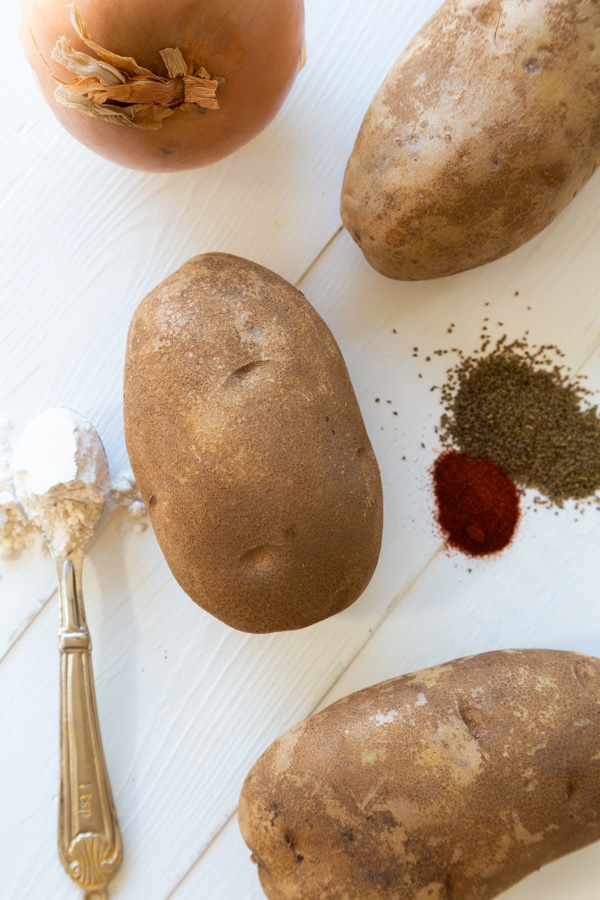 In a food processor, use your grating attachment to grate your peeled potatoes.

Feel free to use a box grater, just realize that it will take a while.

Submerge your potatoes in a bowl of ice water and let them sit for ten minutes.

This will help remove the starch from the potatoes, so they become perfectly golden brown when frying!

If you don’t remove the starch, the pancakes will brown very quickly, but will not crisp.

We realize that we suggest using Russet potatoes because they have a high starch content, and here we are telling you to remove starch.

It sounds contradictory, but trust us, this works. 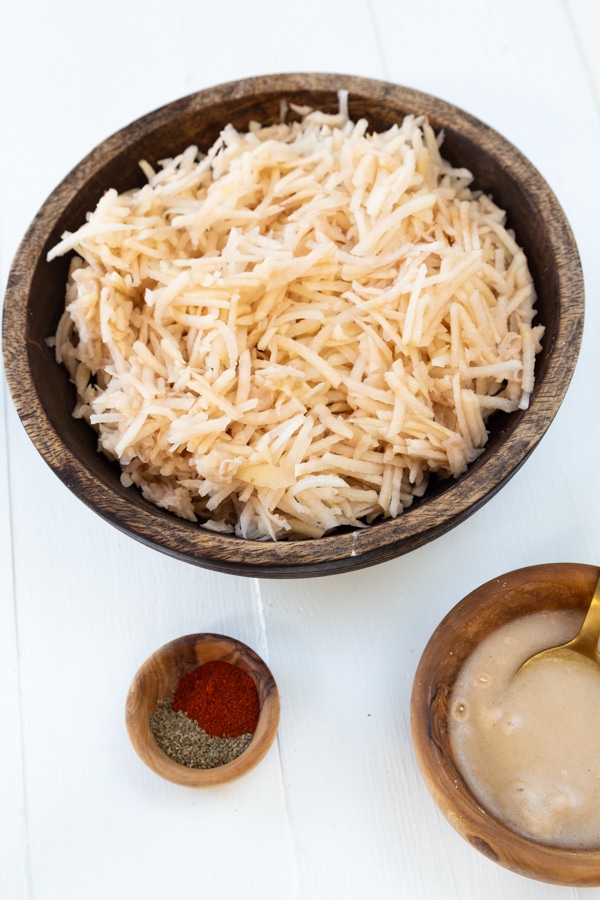 Wring the excess water out of the potatoes with a clean towel, preferably one that wasn’t washed in scented laundry detergent or fabric softener.

Combine all the ingredients in a large bowl until well blended. 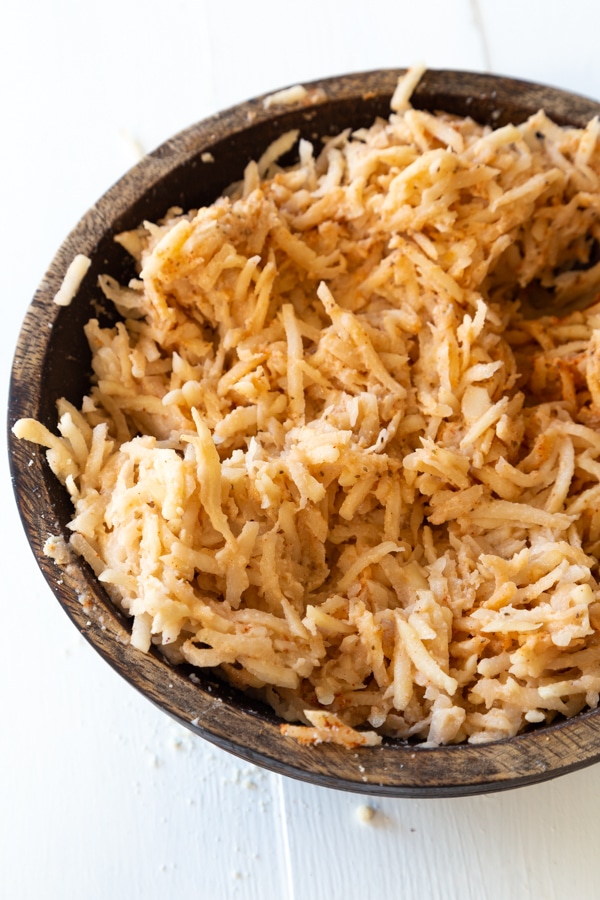 Form the potato mixture into pancakes. 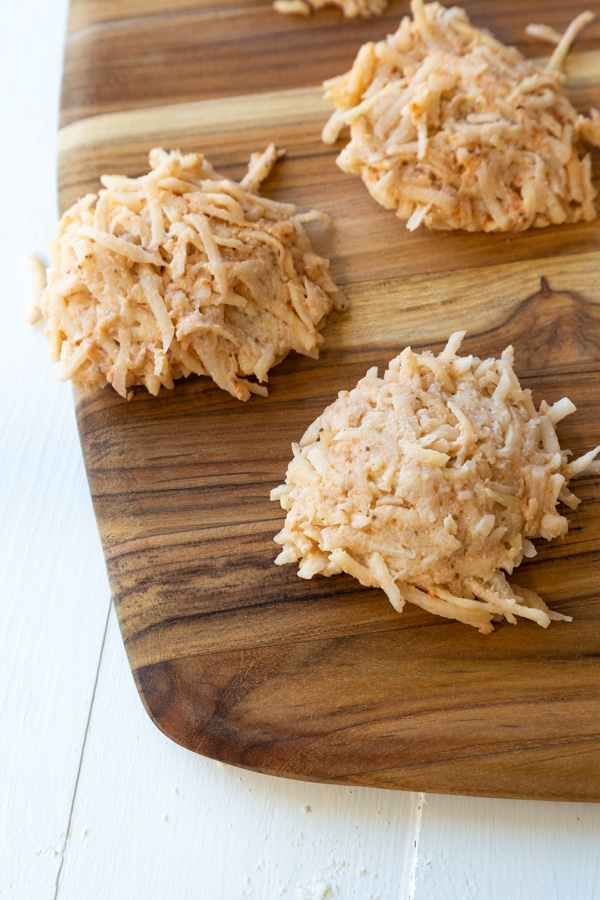 Heat the oil on medium-high heat in a cast iron skillet. If using another pan, make sure the sides are high enough to prevent any oil from spilling over the side. If you’re nervous, use a pot with a wide base!

Once the oil is heated, add the potatoes slowly and carefully, one by one, into the oil. Cook the pancakes for two minutes per side or until crispy and golden brown.

Remove the potato pancakes from the oil and place on a paper towel lined wire rack. The paper towel will remove the excess oil from the pancakes. 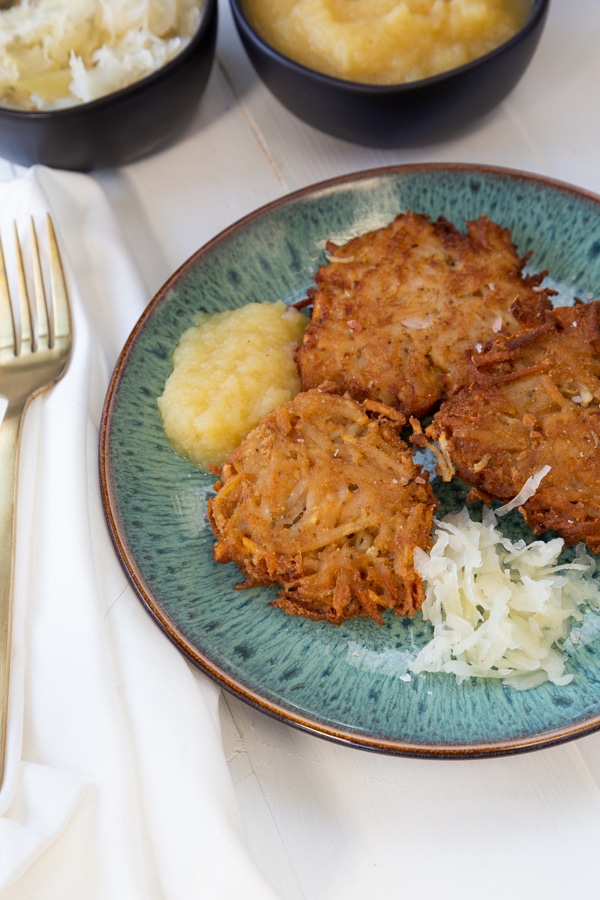 Can You Make Them Ahead of Time?

We suggest making them right after peeling and grating the potatoes so they don’t turn brown.

You can fry them and then refrigerate or freeze them, and then heat them up in the oven.

We highly recommend serving potato pancakes hot! So, when you’re making these guys and want to make sure everyone is sitting down to eat together, heat your oven to 200°F (93°C) and place the potato pancakes on a baking sheet in the oven until they’re all fried.

What to Serve Them With 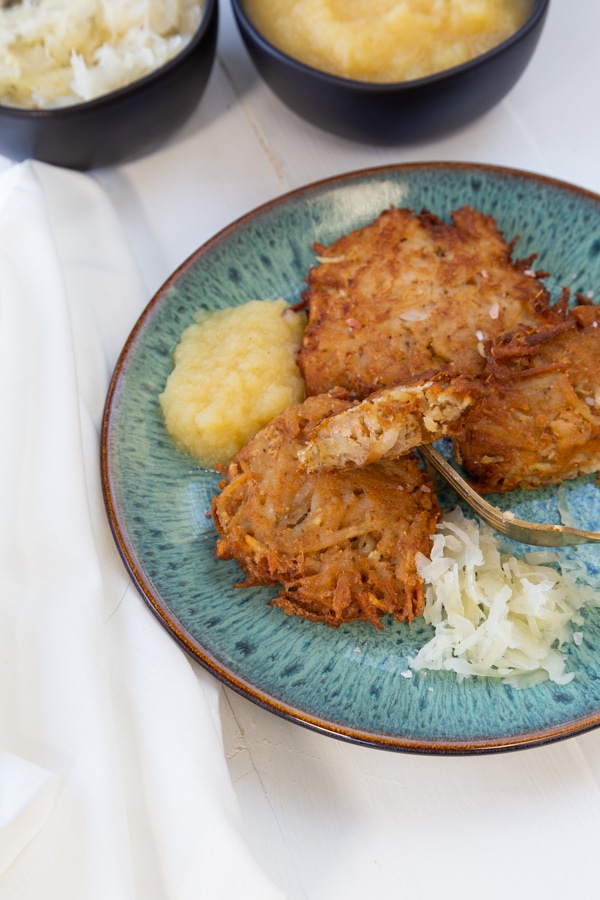 Make our savory vegan potato pancakes and let us know what you think. Tag us on Instagram and show us your beautiful creations! 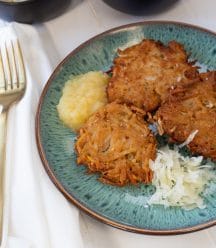 These German Potato Pancakes pack some extra spice and an alternative method of cooking to create a healthy snack or a crispy fried potato pancake! 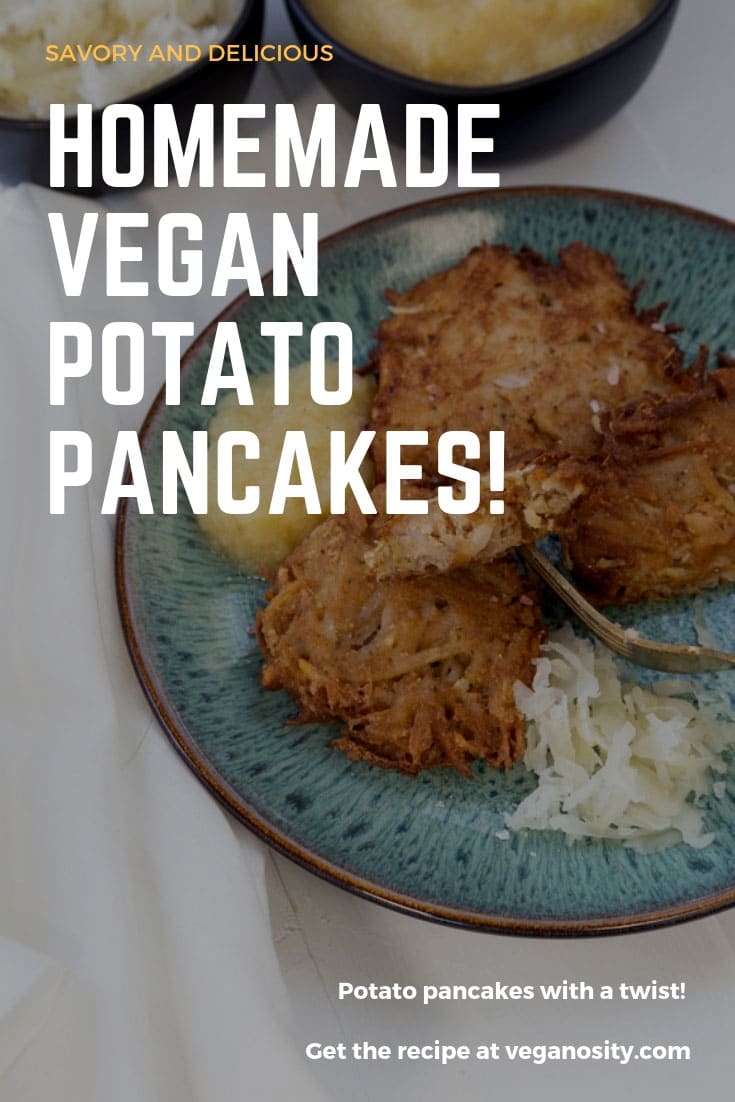 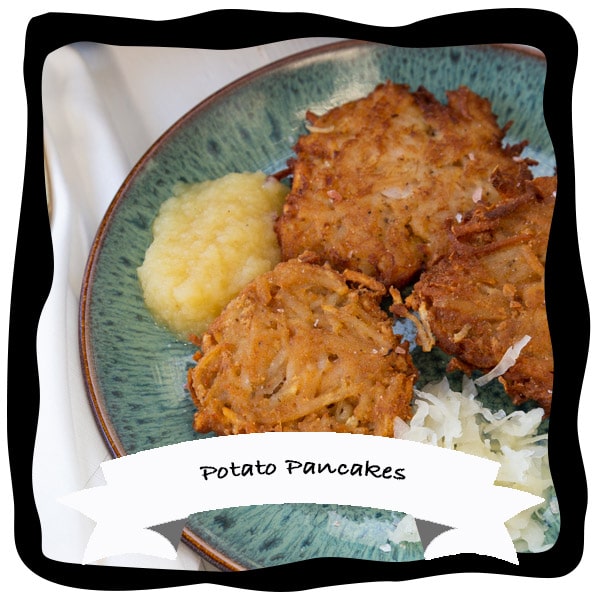 585shares
Healthy vegan recipes that will keep you strong, fit, and satisfied.