Savory Sweet Potato Bruschetta is an easy and delicious vegan appetizer that’s perfect for a simple happy hour or an elegant party. It pairs well with white or red wine. If you need two appetizers, it’s perfect with our Onion Confit Tartlets. 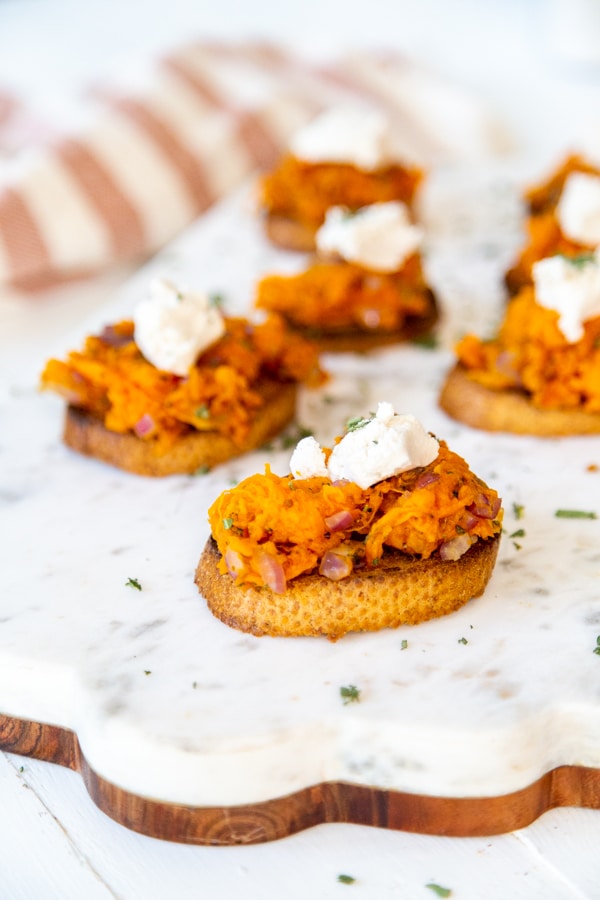 Well, this is a great question. We’re glad you asked.

In our minds, it comes down to semantics. Both definitions are correct, and depending on where you grew up and what you were raised to call this delicious appetizer, you wouldn’t be wrong to call it either one. 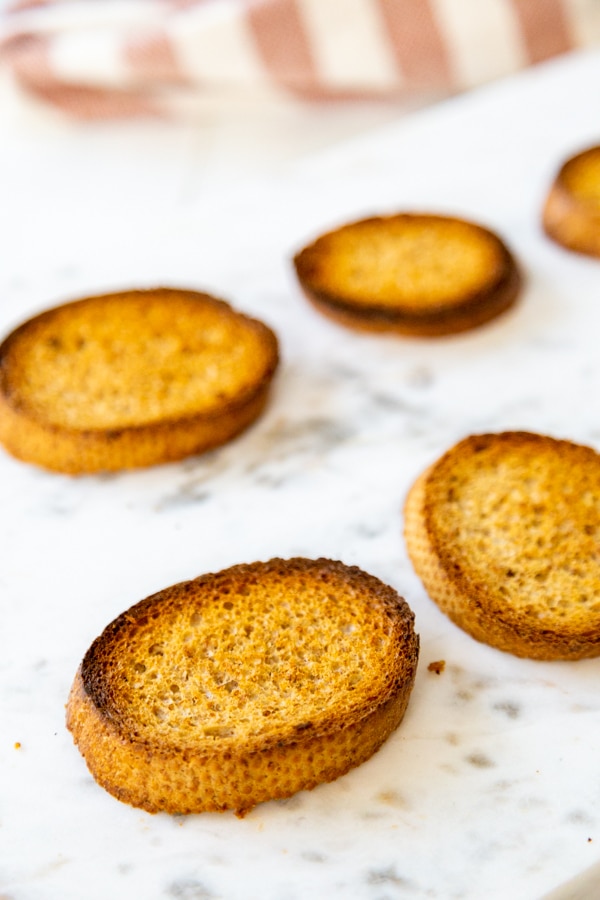 What is a Canape?

A canape is a small bite appetizer that’s served on toast, puff pastry, or a cracker.

You can put whatever you want on the base, whether it be vegan cheese and a dollop of fig preserves, or this savory sweet potato dip.

Bruschetta is an Italian appetizer, or antipasto.

Traditionally it’s toasted bread that’s rubbed with garlic and olive oil, then topped with fresh tomato and basil; however, you can add other vegetables, beans, or vegan cheese.

So, whether you end up calling this simple savory appetizer a canape or bruschetta is up to you. We’re going to call this a bruschetta recipe.

HOW DO YOU MAKE VEGAN BRUSCHETTA?

The first thing you’ll need to do is roast the potato.

We roast it with the skin on at a high temperature for about an hour, or until it starts to caramelize.

Tips for Baking or Roasting a Sweet Potato

While the potato is roasting, sauté the onion, garlic, and Italian seasoning in the olive oil until the onion is soft and translucent.

Slice a small baguette (you want a thin baguette for small rounds of toast) into half-inch rounds and put the rounds on a baking sheet.

Brush with olive oil, then sprinkle with sea salt.

Toast the bread in the oven for approximately five minutes, or until the toast is a light golden brown around the edges.

Put the potato in a mixing bowl with the onion and garlic and add the truffle oil.

Stir the ingredients together until the onion, oil, and sweet potato are evenly combined.

Spread the sweet potato dip on the toast and garnish with a dollop of vegan ricotta and minced parsley.

WHAT IS TRUFFLE OIL?

Truffles are a fungus (similar to mushrooms) that resemble a lumpy potato.

They grow underground in wooded areas and are generally found in France because of its calcareous soil.

Unlike mushrooms, which have a musky, meaty flavor, truffles are oaky and nutty with a slight sweet flavor. There are also hints of savory flavors that resemble black olives.

It’s a complex delicacy that’s worth adding to certain foods.

Now, here’s the thing about truffle oil. Most truffle oil is made with chemicals to mimic the flavor of real truffles.

Invest in oil that’s infused with the flavor of real truffles. It’s worth every penny. 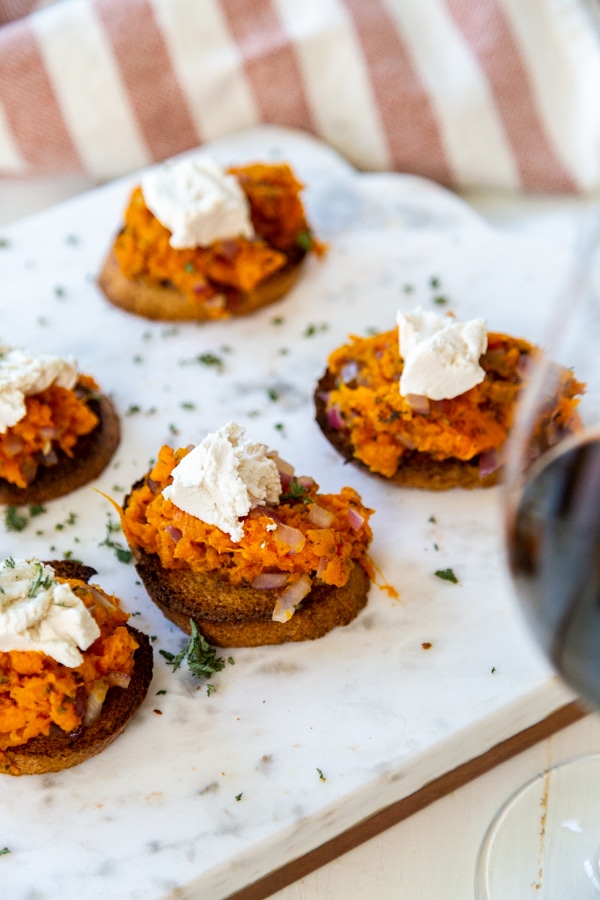 Make this roasted sweet potato recipe and let us know what you think. We love to hear from you! And, don’t forget to take a picture of your gorgeous creation and tag us @veganosity on Instagram. 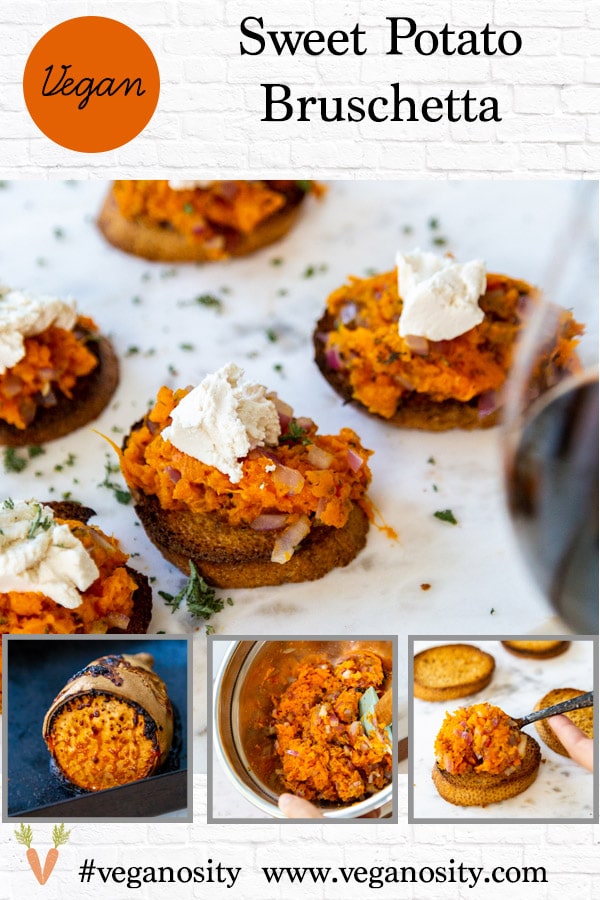 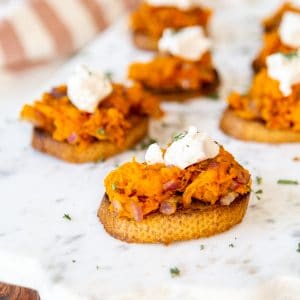 NUTRITION DISCLAIMER   Make sure to buy truffle oil that’s infused with REAL truffles. Many oils are made with a chemical that mimics the flavor of truffles and they don’t taste good.