This vegan red velvet cupcakes with cream cheese frosting recipe is incredibly moist and tender, with a sweet and tangy flavor, which is exactly how red velvet cake is supposed to taste. It's the perfect dessert to make for Valentine's Day, Christmas, the Fourth of July, or whenever you need a red cake. We even used this cake recipe to make our fun and spooky skull cakes  for Halloween. 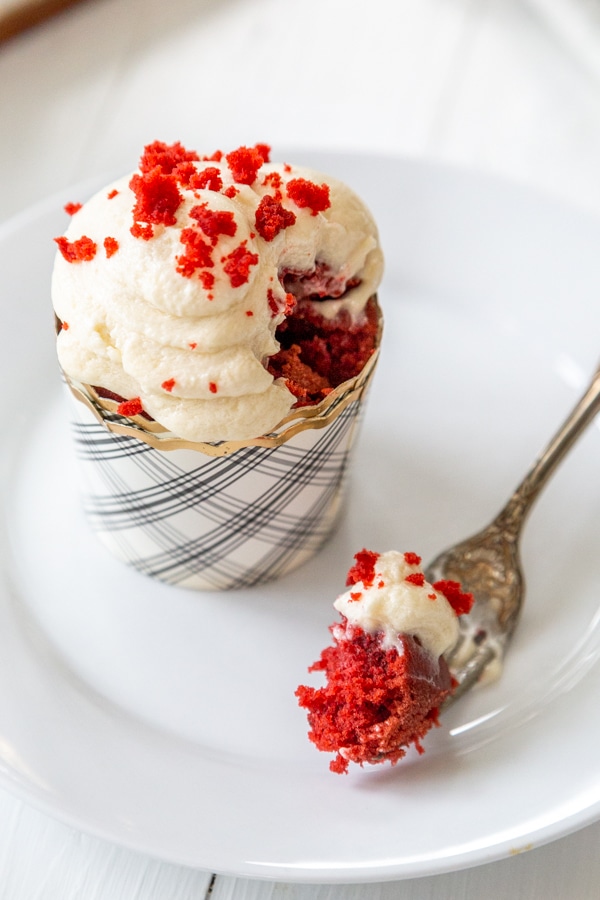 This delightful cake is made with chocolate, vanilla, and buttermilk, so it tastes sweet and tangy with a hint of chocolate and vanilla.

It's one of our favorite cakes because the flavor isn't flat. There's a lot going on without it being too over the top.

And, the vegan cream cheese frosting gives it even more tangy sweetness.

Those people would be wrong, and this is why: 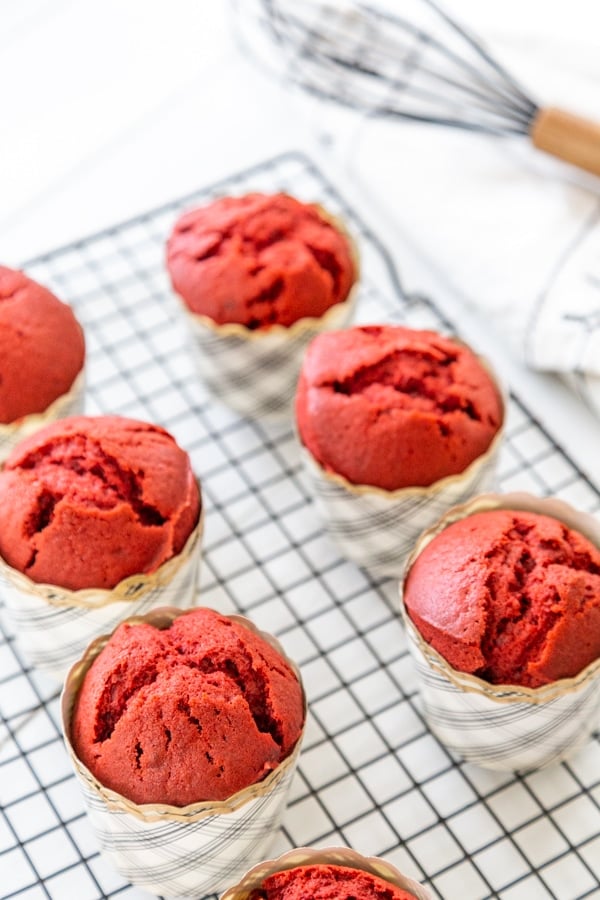 How do You Make Buttermilk Vegan?

Even before we went vegan, we made our own buttermilk. It's easy, and you only need two simple ingredients. Plant milk and an acid, such as lemon juice or white or apple cider vinegar.

You'll need an unsweetened and unflavored plant-based milk. Although we don't recommend coconut milk for this recipe, you can use any of the following:

Is Red Food Dye Vegan and What Kind of Dye is Best?

From the research we've done, most red food dye is now vegan.

As much as we love the idea of using all natural food coloring, it really doesn't work well for this recipe.

We tried several different brands of natural red food dye, and every single time the color went from red to a faded reddish brown during the baking process.

For this recipe we recommend using McCormick or Watkins food dye. Either one will give your cake a beautiful red color. 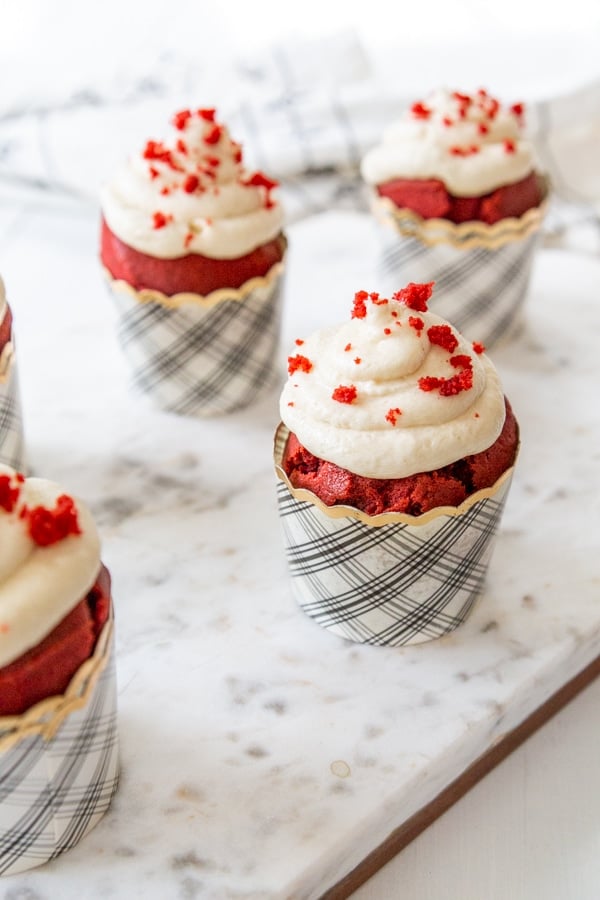 HOW TO MAKE OUR EASY RED VELVET CAKE RECIPE

There are so many cute cupcake liners that you can choose from today. So much better than the standard solid pastel paper liners from the past.

Just mix the lemon juice (or vinegar) and plant milk until combined and let sit for 10 minutes.

Pour the wet oil mixture into the dry mixture and beat with a paddle attachment until just combined. Slowly add the boiling water until combined. The batter will be thin, not thick.

Fill each cupcake liner until almost full. Bake for approximately 45 minutes, or until a wooden toothpick comes out clean when inserted in the center.

Cool in the pan for 10 minutes and then invert onto a cooling rack until they’re completely cool before frosting.

If you want to make a cake instead of cupcakes, lightly grease two 8-inch round cake pans and fill three quarters full.

Bake for approximately 50 to 60 minutes, or until a toothpick comes out clean when inserted in the center of the cake.

Cool for 10 minutes in the pan and then invert the cakes onto a wire cooling rack to cool completely. 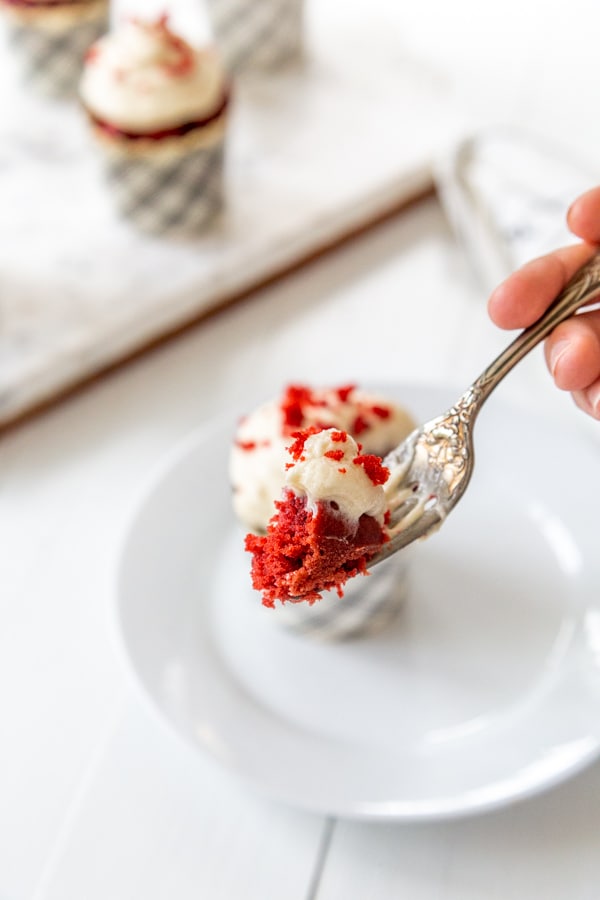 Vegan cream cheese frosting is easy. You only need the same ingredients that you'd use for the conventional kind, only they're plant-based. 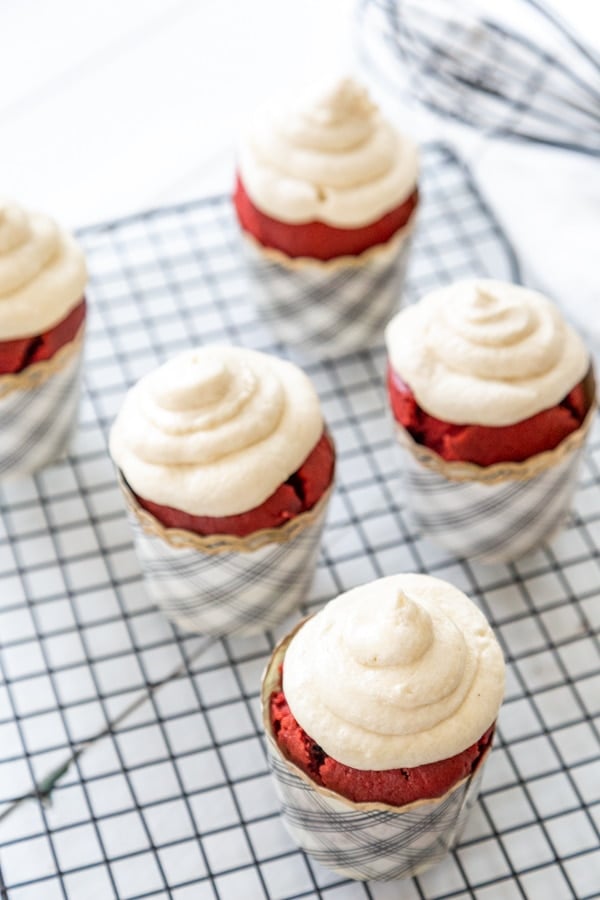 Put eight ounces of vegan cream cheese, eight tablespoons of almost room temperature vegan butter, and one cup of sifted (this prevents lumps in the frosting) powdered sugar in a large mixing bowl and beat with a whisk or paddle attachment.

We prefer the whisk attachment because it creates air bubbles in the frosting, which makes it light and fluffy.

Because the moisture level varies in each container of cream cheese and vegan butter, you may need to add more powdered sugar. Add by the tablespoon until you get the texture you’re looking for.

That’s it, one easy step to make a perfectly thick and creamy vegan cream cheese frosting.

Once the cupcakes are completely cooled, you can frost them with a frosting knife or put the frosting in a piping bag and use your favorite decorating tip to create something fun and pretty.

DECORATING TIP: If you have an extra cupcake, crumble it and sprinkle the crumbs on top of the frosting to decorate. 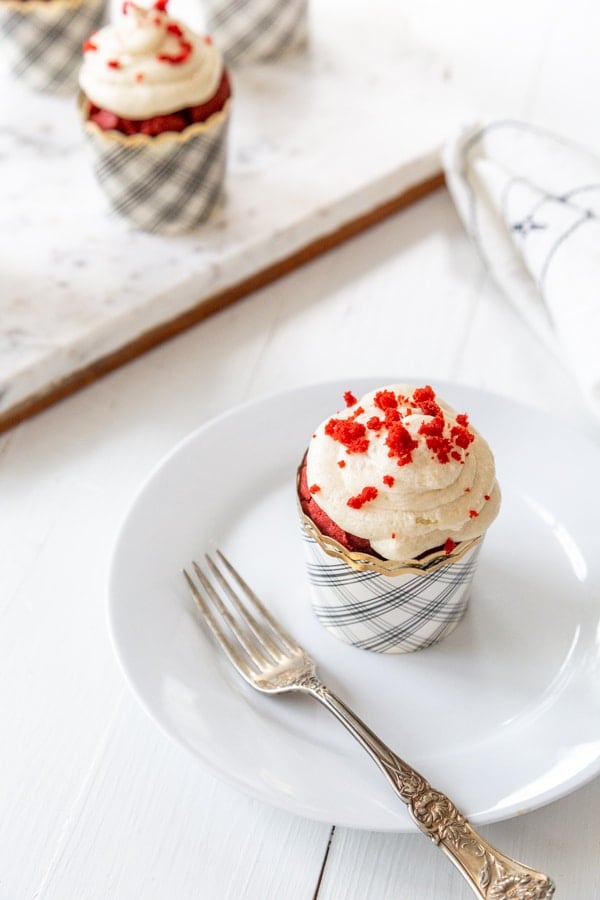 Store this cake covered in the refrigerator when frosted with the cream cheese frosting.

You can freeze the cake in a freezer safe container for three months, although we don't recommend freezing the frosting. Make it fresh.

The texture will be slightly different than this version, but still good.

Make our vegan red velvet cupcakes and let us know what you think. We love to hear from you! And, don’t forget to take a picture of your gorgeous creation and tag us @veganosity on Instagram. 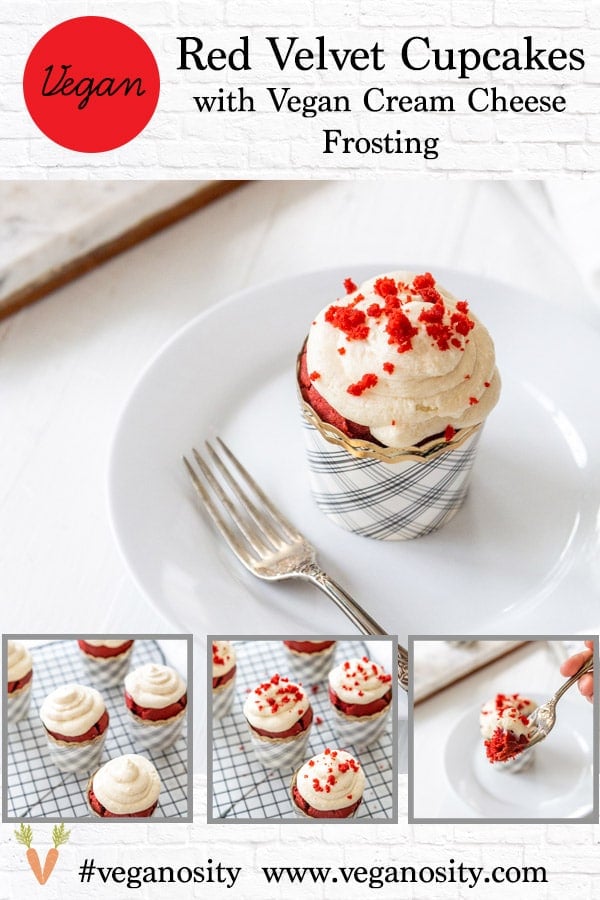 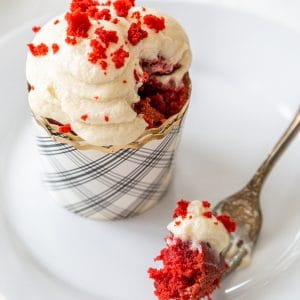