Vegan Blueberry & Rosemary Crisp is an easy and delicious dessert that takes full advantage of the summer fruit season. Eat this sweet and savory vegan blueberry crisp for breakfast, a mid-day snack, and of course, for dessert. If you love blueberries as much as we do, you should take a look at our lemon blueberry muffins, our blueberry thyme skillet pie, blueberry basil salad dressing, and our easy blueberry pancakes. 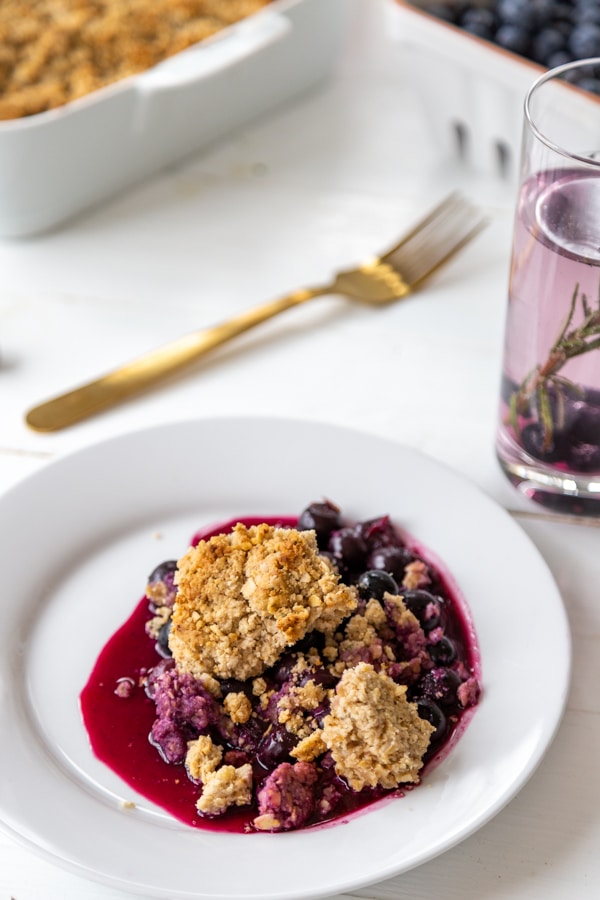 Originally published on August 12, 2014 and updated on June 18, 2019.
This post may contain affiliate links which won’t change your price but will share some commission. 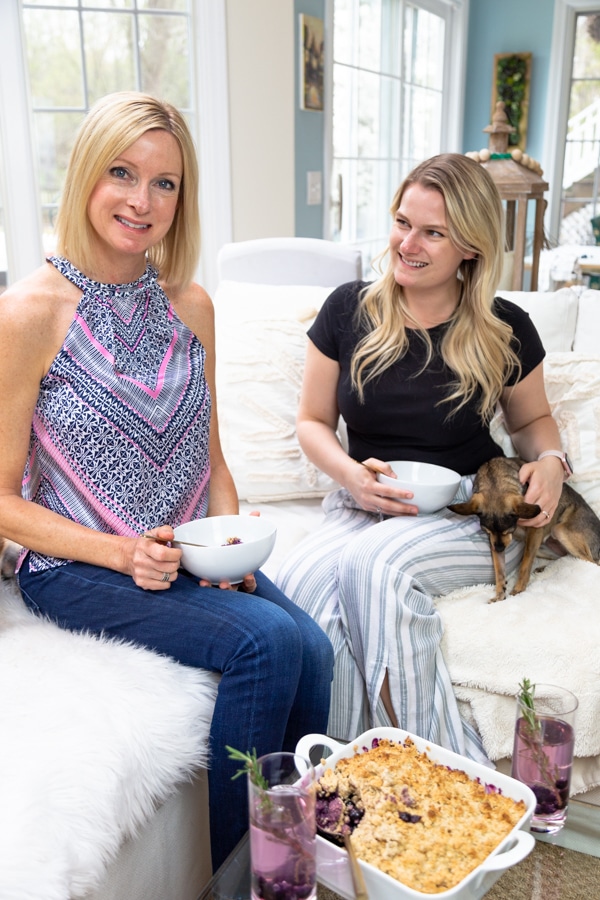 Hi there! Thanks for visiting us, we’re so happy you’re here. If you’re looking for Southern inspired vegan comfort food recipes, you’ve come to the right place.

I opened the fridge this morning and discovered that the hubby and I were on the same blueberry wavelength this weekend, because we each purchased a one pound container of organic blueberries.

Two pounds of sweet and tangy balls of antioxidants. Oh yeah, that could only mean one thing – a healthy blueberry & rosemary crisp!!

Don’t you love it when good things just seem to land in your lap?

Like when an unexpected check shows up in your mailbox, or a friend invites you over for a glass of wine (or whine) when you’re having a bad day?

Well, finding an abundance of blueberries in my fridge felt like one of those windfalls, because it gave me an excuse to make one of my favorite desserts.

Blueberry crisp is one of the easiest fresh blueberry recipes to make. It only takes a few simple steps and some time in the oven before you're going to be able to dig into a delicious and somewhat healthy (as far as desserts go) treat. 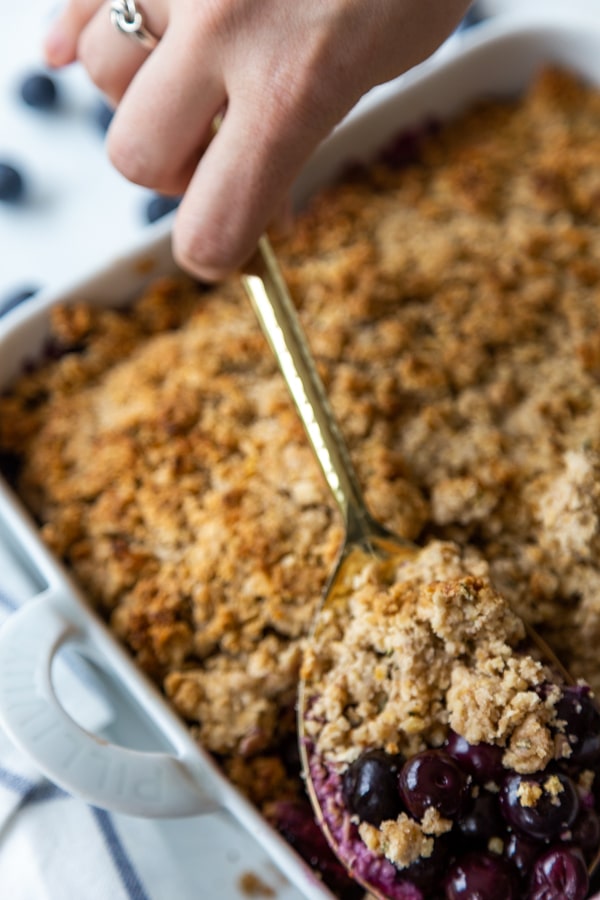 WHAT'S THE DIFFERENCE BETWEEN A CRUMBLE, A COBBLER, AND A CRISP?

This is an excellent question and it needs to be answered, because it's confusing to many people.

Although all three are baked fruit desserts, there is a difference because of the toppings.

WHAT IS A COBBLER?

A cobbler has a thick biscuit like topping that covers the entire pan of fruit.

We like to make drop biscuits and drop the biscuit dough evenly over the fruit and then bake it until it's golden brown and delicious.

WHAT IS A CRISP?

A crisp is very similar to a crumble, only it has oats in the topping to give it a crispy texture.

You can also add chopped nuts to a crisp.

WHAT IS A CRUMBLE?

A crumble is similar to a crisp. The topping is like a streusel, only it doesn't have oats or nuts. It's made with butter, sugar, and flour.

Unless you're a strict stickler for rules, a crisp is a crumble and crumble is a crisp. 😉 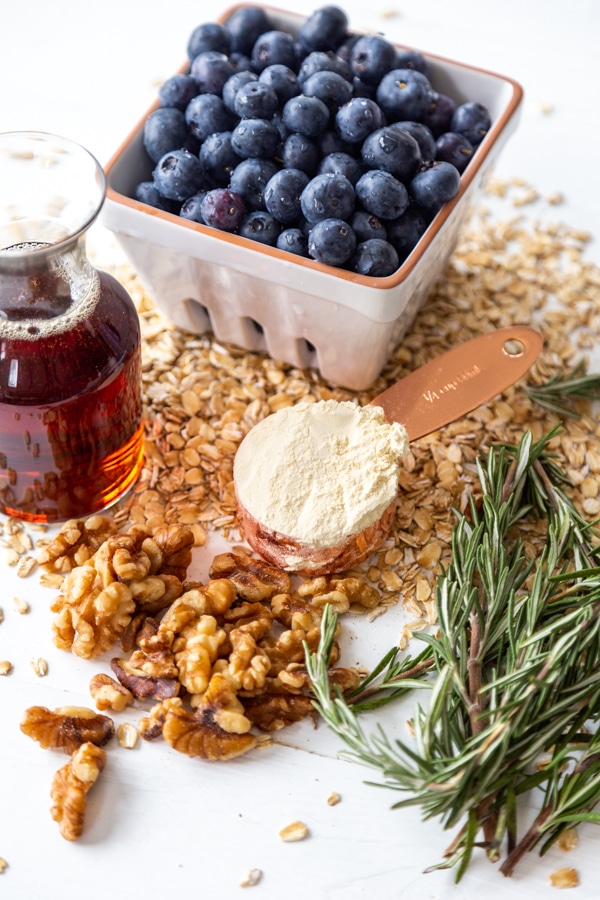 WHAT INGREDIENTS DO YOU NEED TO MAKE A VEGAN BLUEBERRY & ROSEMARY CRISP?

You only need eight simple ingredients to make this healthy blueberry crisp. Here's what you'll need:

Let’s talk about the rosemary for a minute.

Were you questioning that one ingredient? It’s kind of like that old game, One of These Things is Not Like the Other. Can’t you just hear that little jingle from Sesame Street?

Anyway, the rosemary compliments the blueberries and adds a little savory flavor to the mix. If you don’t like it you can skip it, but I wouldn’t. It really does make a difference.

HOW TO MAKE A VEGAN BLUEBERRY & ROSEMARY CRISP

You're going to love how easy this is to make.

Wash the blueberries in a colander and let the excess water drain, then pour them onto a clean towel or a few paper towels and gently pat them dry.

You'll want to start with dry blueberries because when they cook they'll make their own liquid in the crisp. If you start with wet blueberries the crisp will be too watery. 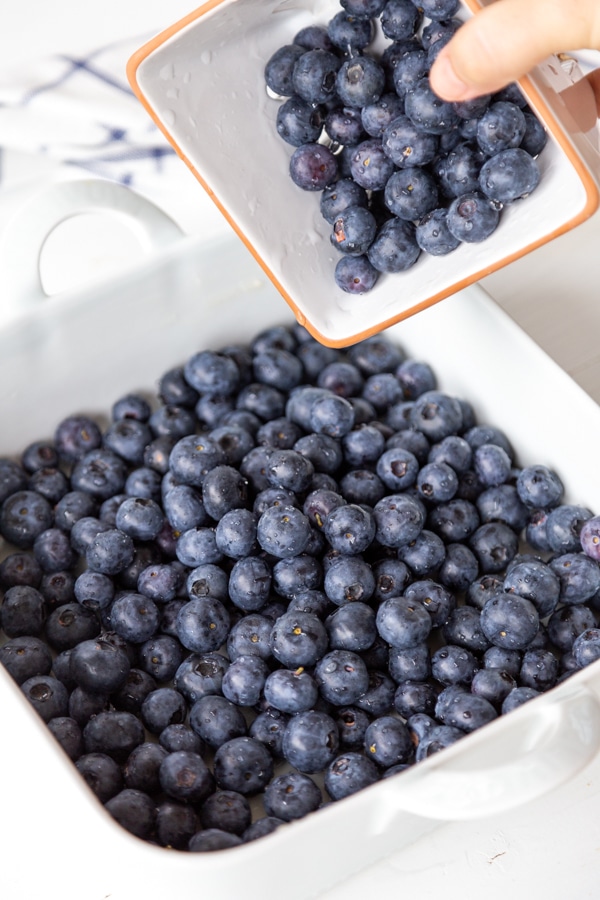 In a food processor, pulse the flour, oats, walnuts, vegan butter, maple syrup, minced rosemary leaves, and salt together until it it's crumbly. It should look like this: 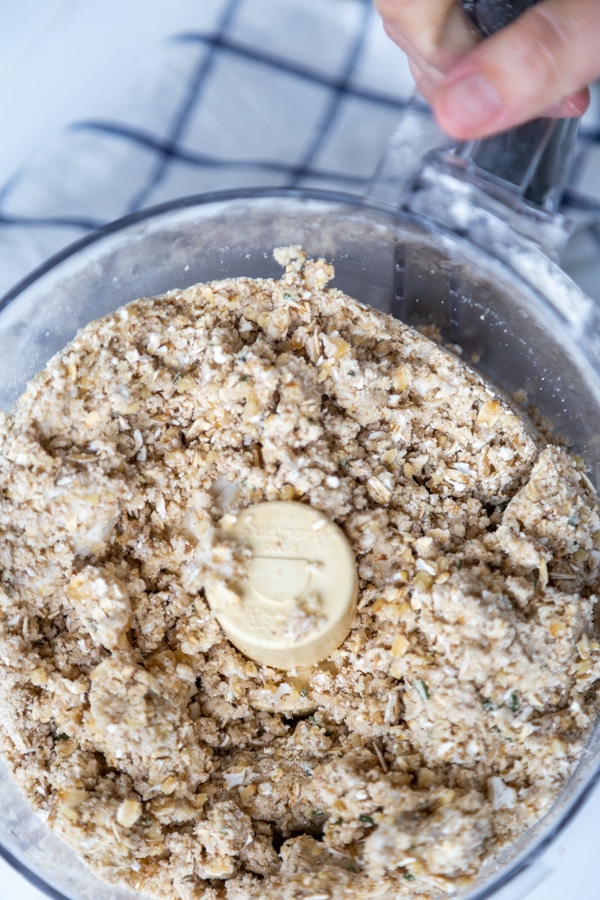 Evenly pour the washed and dried blueberries into an 8 x 8-inch (163 cm) square baking pan, then evenly sprinkle the pulsed oat and flour mixture over the blueberries. 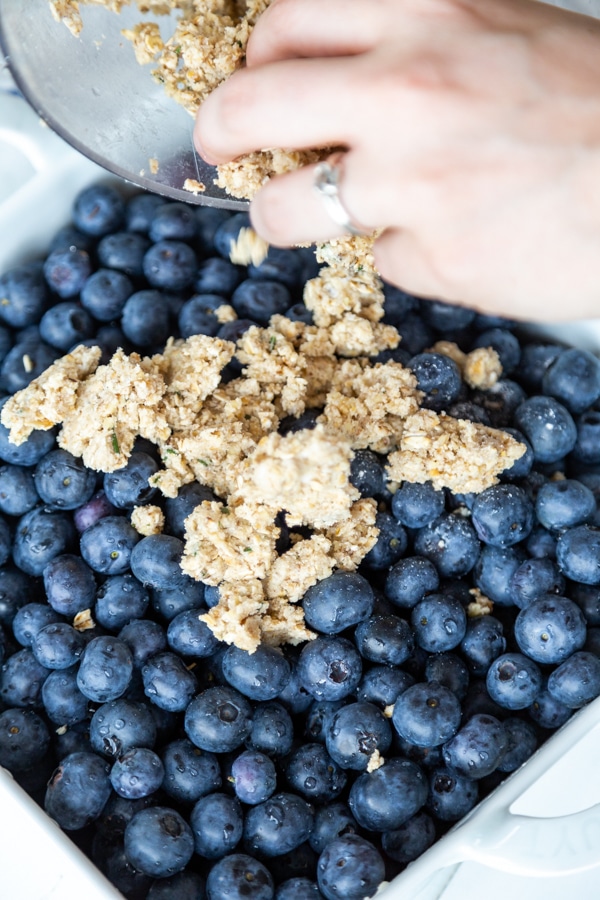 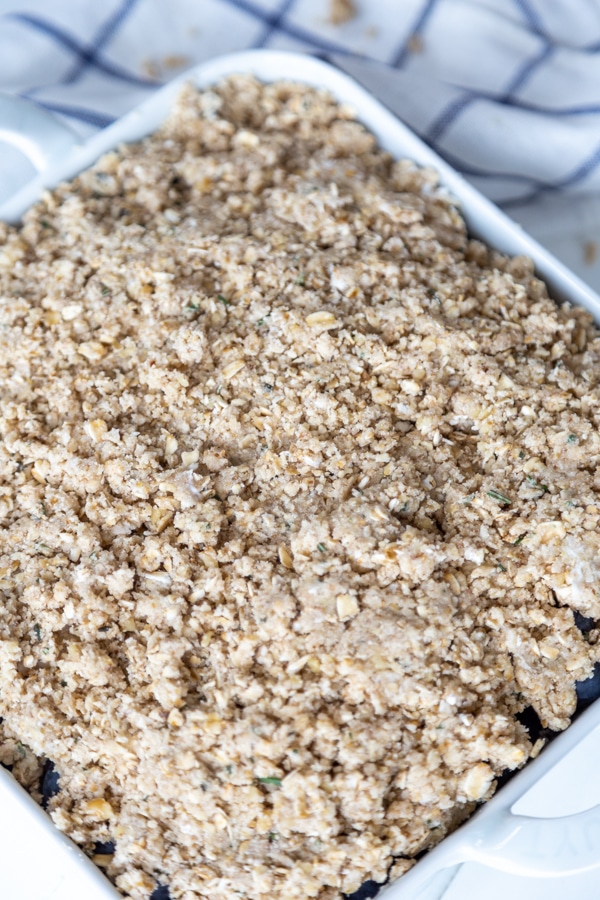 Bake the blueberry crisp for approximately 40 minutes, or until the topping is golden brown and the blueberries are bursting. 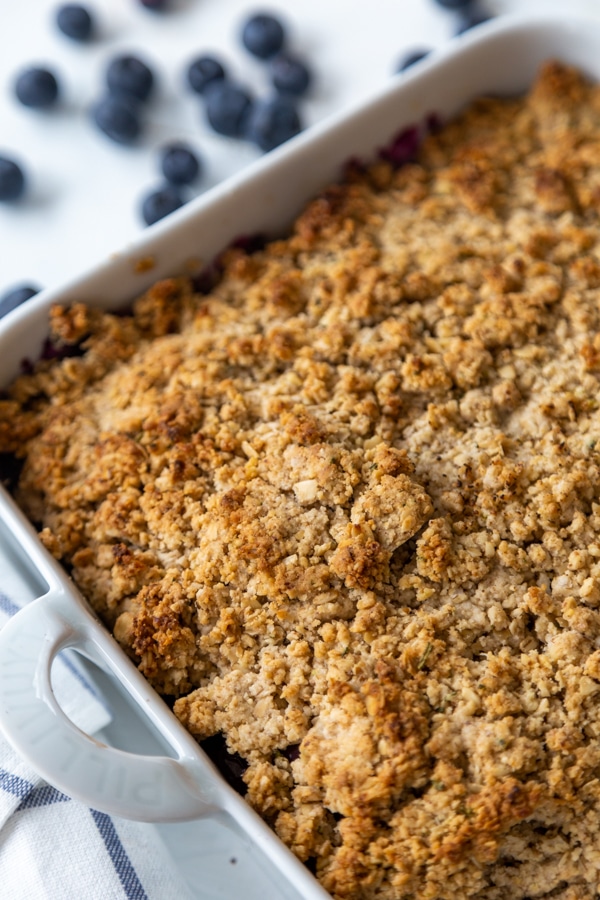 HOW DO YOU STORE BLUEBERRY CRISP?

HOW DO YOU REHEAT A VEGAN BLUEBERRY CRISP?

For a refrigerated crisp, we suggest reheating your fruit crisp in a 350°F (176°C) oven for approximately 10 to 15 minutes, or until the topping has crisped up.

If freezing,  we suggest covering it in foil (so the topping doesn't get too brown) and baking in a 350°F (176°C) oven for approximately 25 minutes, or until the blueberries are bubbling.

NOTE: You can freeze an unbaked crisp. Follow the baking instructions in the recipe card. Please know that you may have to extend the baking time. 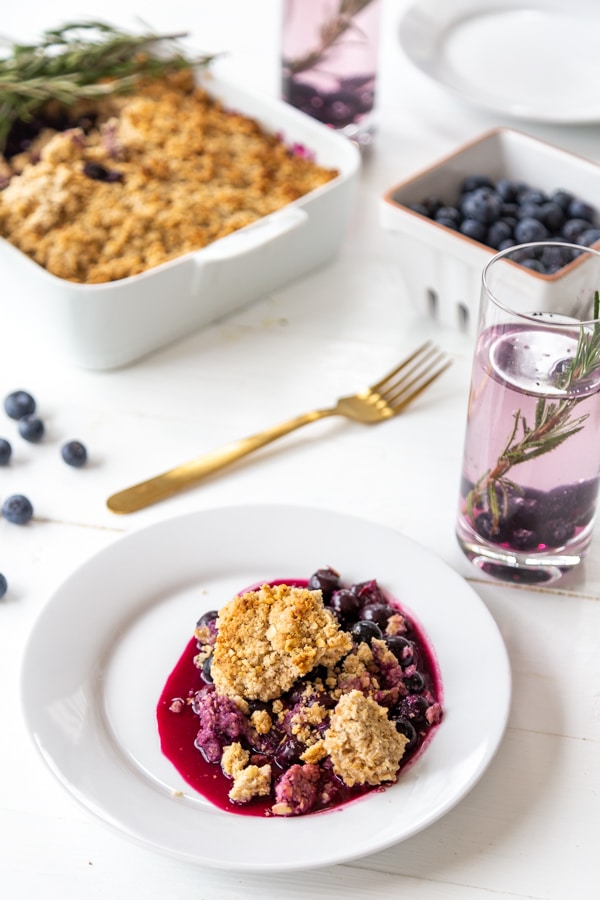 Make this delicious vegan blueberry  & rosemary crisp and let us know what you think. We love to hear from you! And, don’t forget to take a picture of your gorgeous creation and tag us @veganosity on Instagram. 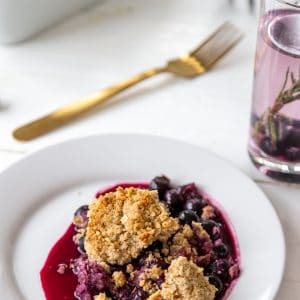 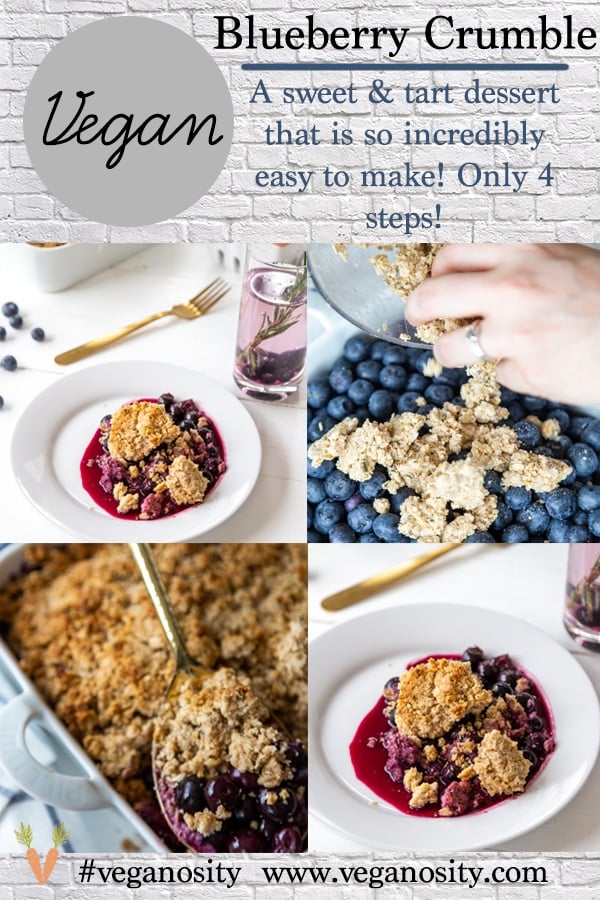