Our smoky pasta with eggplant recipe is an easy and simple pasta recipe that’s perfect for a vegan weeknight dinner. You can make it with gluten-free pasta for a GF option. You can also make our homemade vegan pasta for a super fresh and hearty dish. 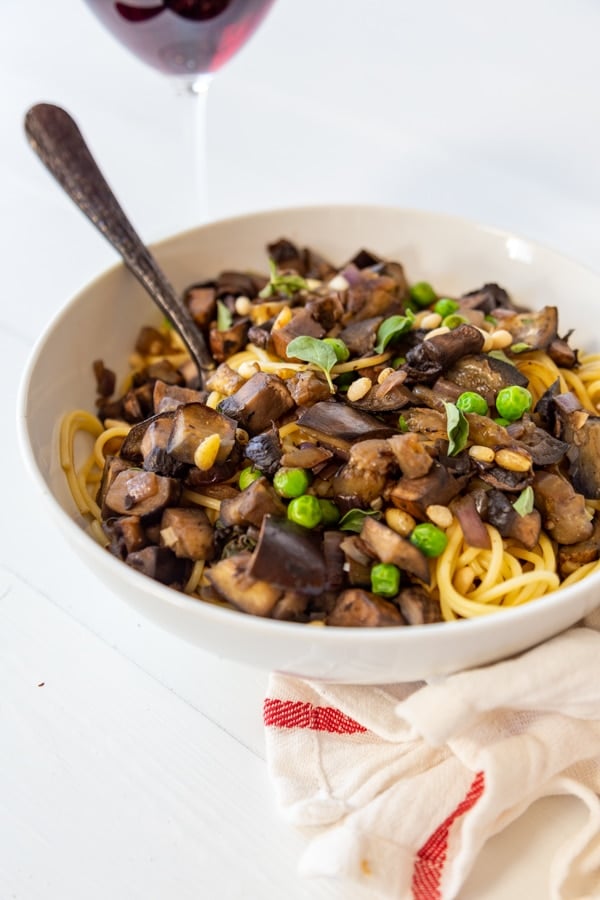 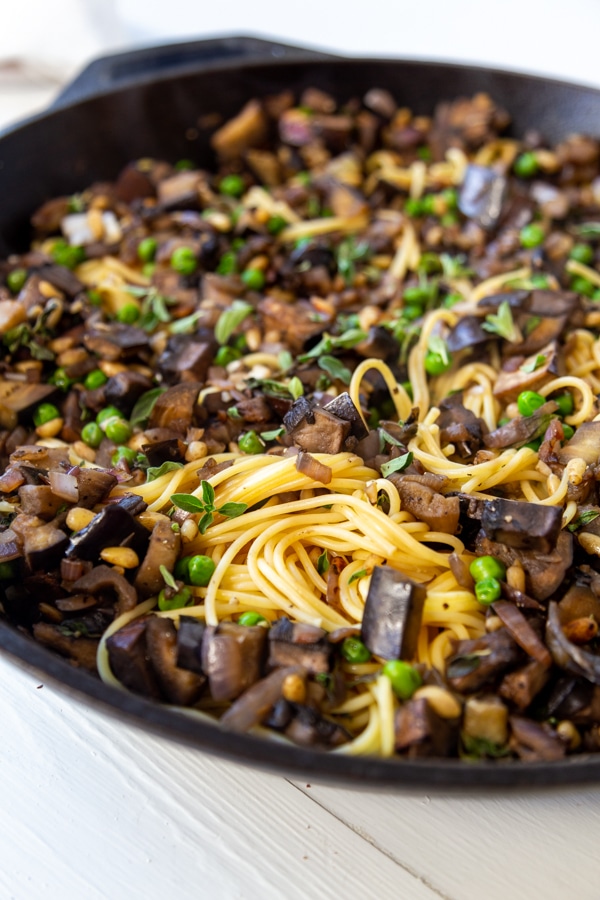 A PASTA DINNER FILLED WITH EGGPLANT

If you’re looking for a simple pasta recipe that’s perfect for a busy weeknight or dinner and a movie on Saturday night, look no further.

This flavorful vegetarian pasta recipe is made with eggplant (aubergine), onion, garlic, green peas, mushrooms, herbs and spices that make this the ultimate vegan pasta recipe.

You can even make the vegetables ahead of time, which means all you’ll need to do is boil the pasta, heat the veggies, and combine.

Once upon a time, eggplant was a bitter vegetable, so people salted the heck out of it to mask the bitterness.

Thankfully, today’s eggplant isn’t bitter, so there’s no need to salt it for taste; however, salting it before cooking does draw out excess water and makes the eggplant creamier.

For this recipe, we’re skipping the process of salting it before we saute it, because we add salt to the eggplant while it’s cooking, and we want it to have a slightly firmer texture for this dish.

If you want a creamier texture, cube the eggplant and put it in a colander, sprinkle a liberal amount of kosher or sea salt on it, and let it sit for 30 minutes.

Rinse off the excess salt and pat dry the eggplant.

We rarely remove the skin because we like the texture, but feel free to remove it if you don’t like it.

You can roast eggplant or sauté it in a pan. 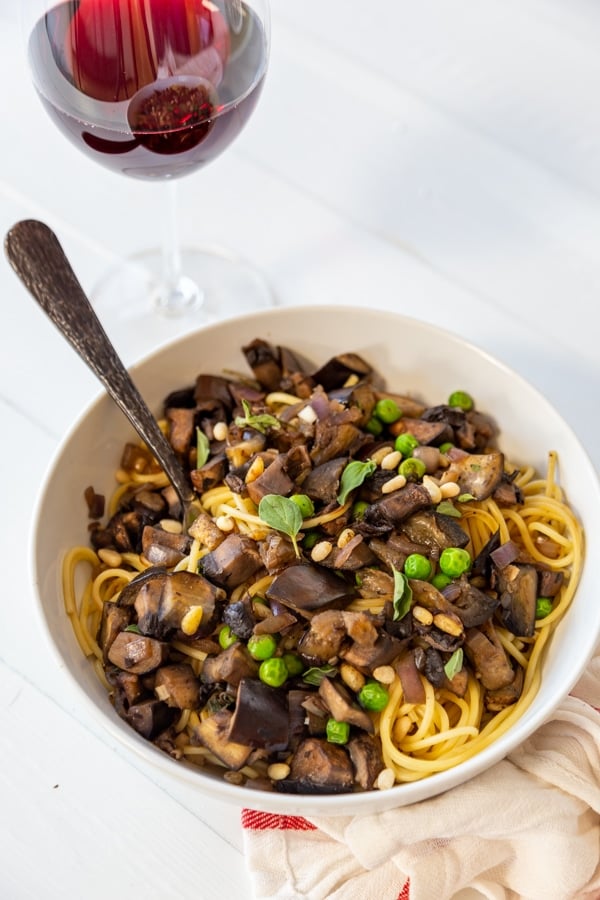 HOW TO MAKE EGGPLANT AND MUSHROOM PASTA

Bring a pot of water to a boil and cook the pasta according to the instructions on the package.
Prepare the veggies and in a large skillet, heat the oil on medium high heat.

Add the onions and the mushrooms and cook until the mushrooms release their water and are nicely browned, approximately 7 minutes.

Remove the onions and mushrooms from the pan and set aside in a bowl.

Add more oil to the skillet and when it’s hot, add the eggplant and peas.

Evenly sprinkle 1 teaspoon of salt in the pan and cook for approximately 7 to 10 minutes, or until the eggplant softens and begins to brown.

Put the mushrooms and onion back in the pan with the eggplant and the peas and add the garlic, pine nuts, and spices. Stir to combine. Add salt and pepper to taste and cook for 3 more minutes.

Drain the pasta and put it back in the pot. Drizzle 1 teaspoon of olive oil and the vegan parmesan over the pasta and toss. Add the eggplant mixture to the pot and fold into the pasta until evenly distributed. 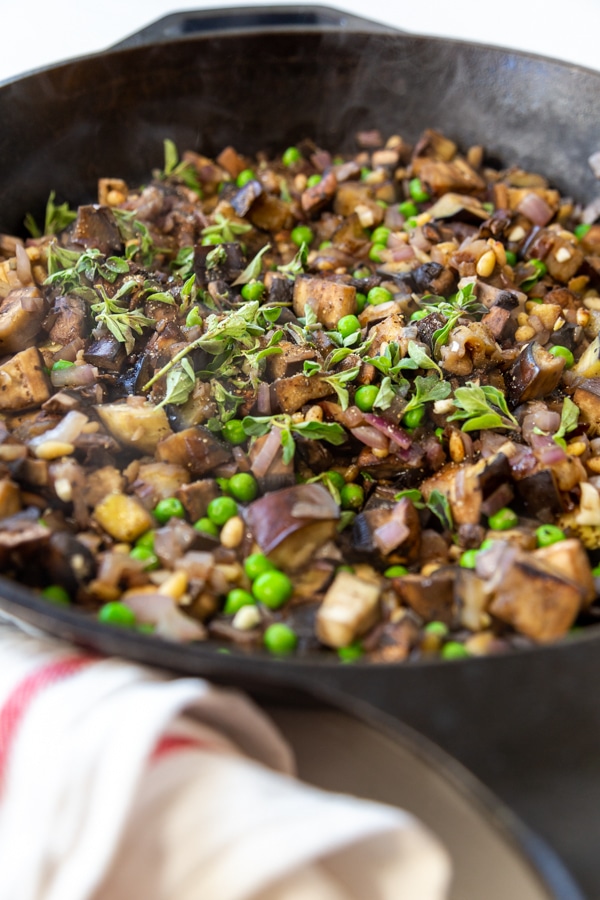 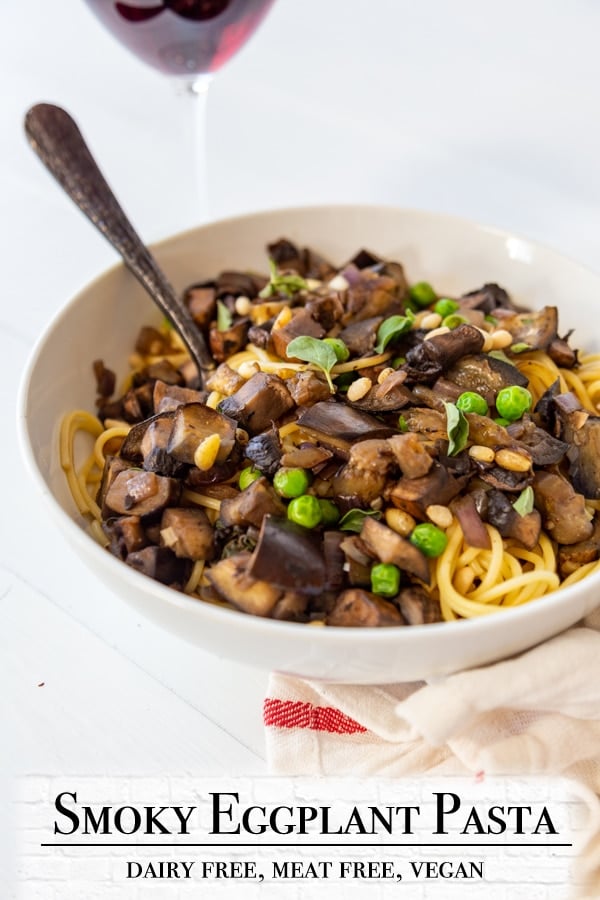 Make our hearty eggplant pasta recipe and let us know what you think. We love to hear from you! And, don’t forget to take a picture of your gorgeous creation and tag us @veganosity on Instagram. 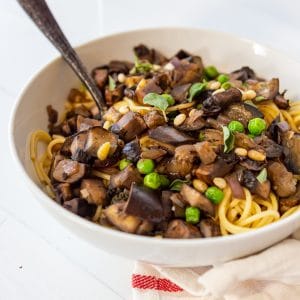 NUTRITION DISCLAIMER You can peel the eggplant if you like, but we recommend leaving the skin on for added texture.