This stuffing is exactly like the stuffing we used to make before we went vegan. Well, almost. The only difference is that the sausage in this apple stuffing is vegan. But only you will know that, and we guarantee that your non-vegan guests won't be able to tell. 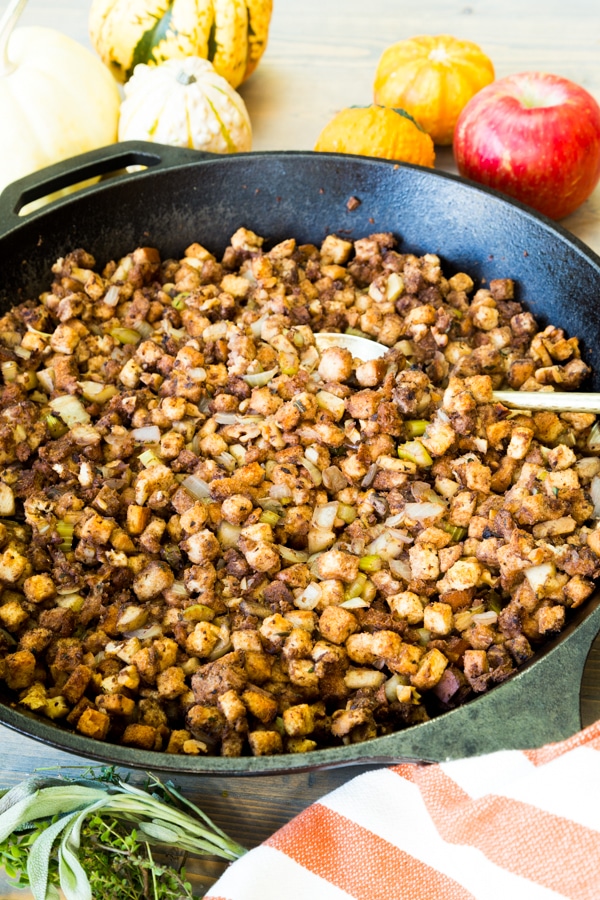 We think stuffing is the most important dish on the Thanksgiving table. Cranberries are next.

Even when we ate turkey, we didn't really eat turkey, because we would rather fill our bellies with the best stuffing ever. And believe us when we tell you, this apple and sausage stuffing with fresh sage and thyme is THE BEST!!!

HOW TO MAKE VEGAN STUFFING WITH APPLES AND SAUSAGE

So let's get right to it. How do you make a vegan stuffing with sausage?

There was a time not so long ago that we would have asked the same question. However, thanks to Beyond Meat, it's not only possible, you can't tell that it's vegan.

We love their sausage so much, and so do our meat eating friends. In fact, we brought Beyond Meat sausage to an Oktoberfest party and everyone who tried it said that they liked it better than meat. Can I hear an AMEN!!!

Now that you know what kind of sausage we used in our stuffing, let's talk about how it's made.

3. While the onions, celery, and apples are cooking, chop up the sausage and toast the walnuts.

4. Add the sausage and fresh herbs to the onion mixture and cook for approximately 5 minutes, or until the sausage is lightly browned.  Salt and pepper to taste and then add the walnuts and breadcrumbs and stir in the vegetable broth. The breadcrumbs should absorb the broth, but they shouldn't be soaked. You don't want mushy stuffing.

5. Put the stuffing in the oven and roast for approximately 15 to 20  minutes, or until it's crispy and golden on top. 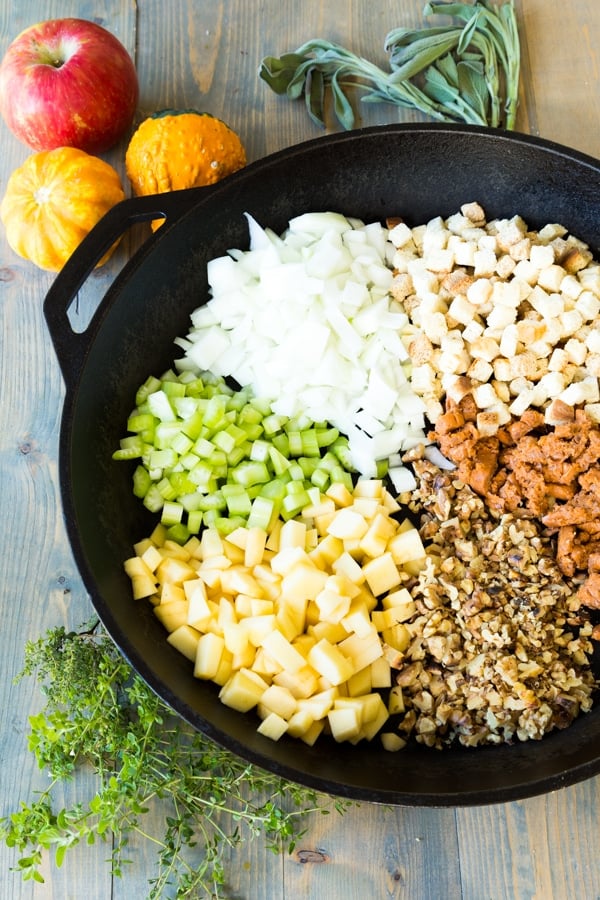 This stuffing is so full of flavor and texture.  We used the Hot Italian Beyond Meat sausage to add extra flavor and the apples balance the savory and spicy with a touch of sweetness. Combined with the walnuts, the apples add texture to the bread stuffing.

HOW TO SERVE VEGAN STUFFING

Of course, you can always serve it on the side of our Lentil Loaf, BBQ Meatloaf, or Vegetable Wellington. You can also stuff a squash with it. Recipe coming soon! 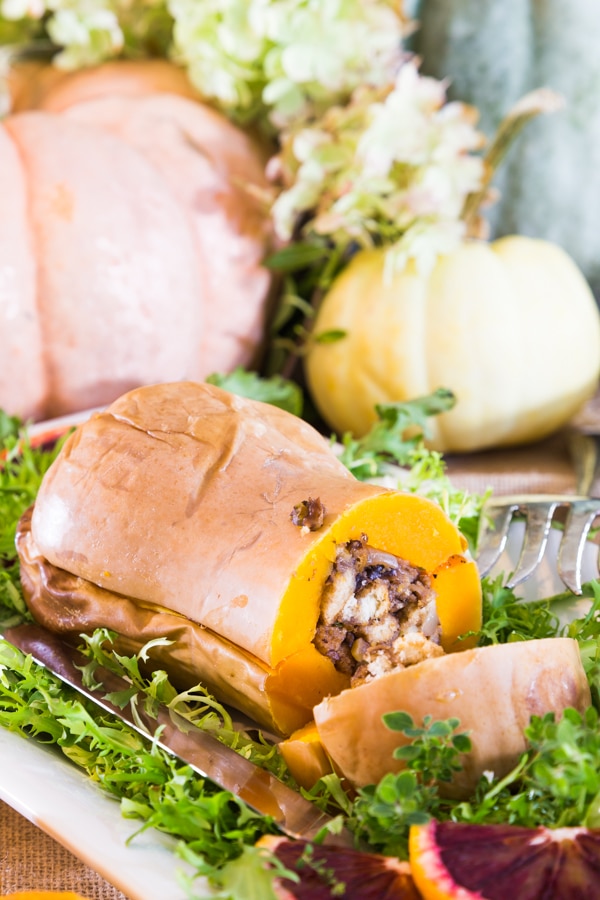 CAN YOU FREEZE VEGAN STUFFING?

Yes! Make sure that you put it in a freezer safe container and seal it well. Thaw it in the refrigerator overnight and heat it in a 375F oven for approximately 20 minutes, or until it crisps up.

Make our homemade vegan stuffing and let us know what you think. We love to hear from you! And, don’t forget to take a picture of your gorgeous creation and tag us @veganosity on Instagram. 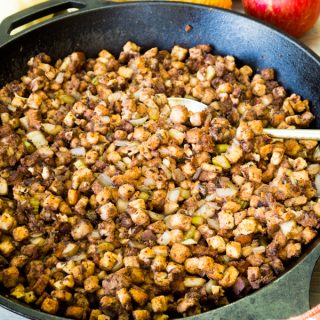 Store covered in the refrigerator for up to 4 days.  The Nutrition Facts are an estimate only. 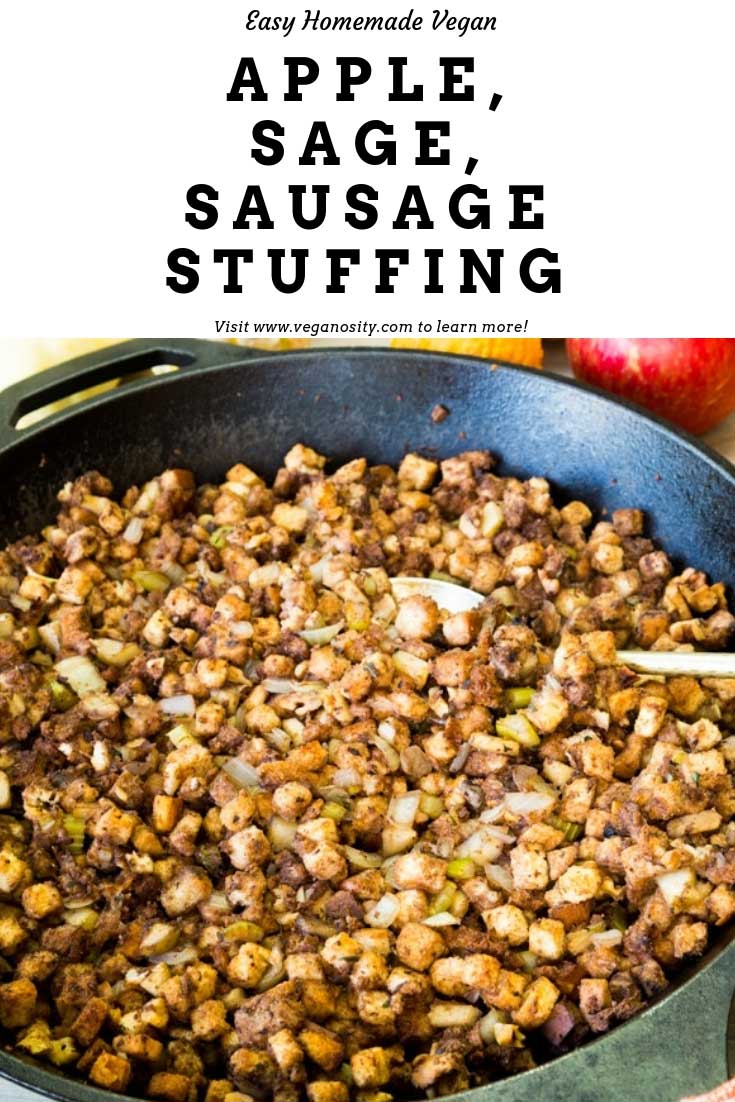