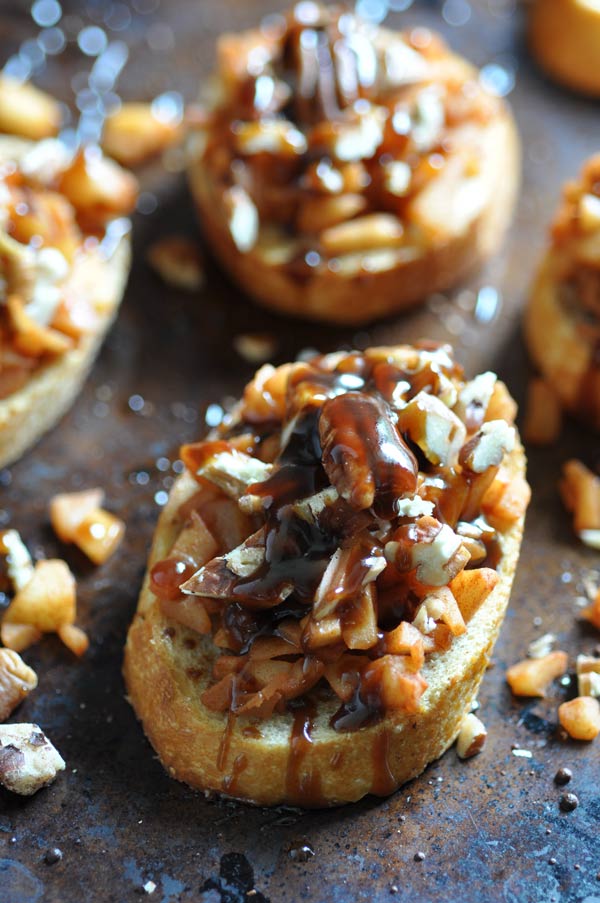 Hi! So you know how I’ve told you in the past that I’m not a sweets kind of person? That I’d rather stuff my face with savory food? That’s still true, and I ate five of these at one sitting, because these little beauties are just as savory as they are sweet. So yeah, I don’t care if you’re raising your eyebrows about that admission. I mean let’s be real, I’m training for a marathon, and I’m HUNGRY! So. I. Eat. A lot.

Now that you know that I can be an oinker from time to time, let’s move along and talk about these amazing little apple dessert bruschettas.

The idea was all Alex’s. Can you say, THANK YOU, ALEX?! Really, you’re going to be thanking her during and after every single bite of this sweet and savory treat.

We were in the middle of our last long run, and as we always do, we were brainstorming for the blog. We have some big plans coming up for the New Year, so stay tuned. We were also creating recipes in our heads when she came up with this genius idea.

You see, we are a bruschetta loving family. She grew up on the stuff. Every party, every weekend, many dinners revolved around garlicky toasted slices of bread and chopped and/or pureed veggies, beans, nuts, herbs, or whatever we could think of to pile on top of the bread. However, we never made bruschetta for dessert. ??

WHY YOU SHOULD MAKE A SWEET BRUSCHETTA FOR DESSERT

If you love homemade applesauce, and you love cinnamon toast, you’re going to LOVE this apple cinnamon bruschetta recipe.

Additionally, it's apple season! Before we get ahead of ourselves and go all in with the pumpkin spice, let us celebrate the beautiful apple. It deserves that. 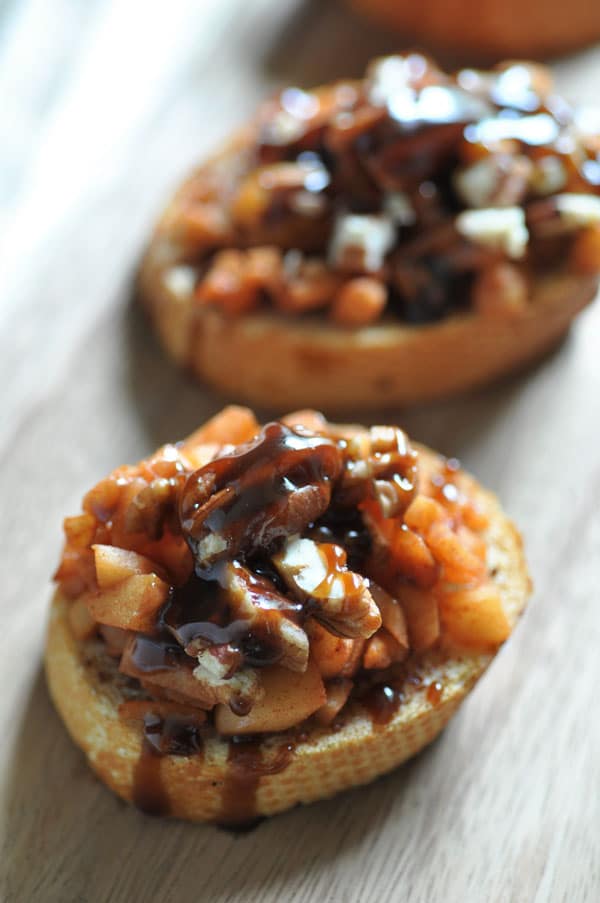 This is an easy and fun dessert (or breakfast) to make with the kids. Serve it already constructed at your next party for an elegant presentation, or let your guests build their own. Either way you’ll be showered with compliments for sharing this wonderful apple dessert.

STEP ONE– Melt some vegan butter and mix up some coconut sugar and cinnamon. Brush the butter on sliced bread (a simple baguette works best) and sprinkle on a thin layer of cinnamon sugar, then toast until the bread is a light golden brown. 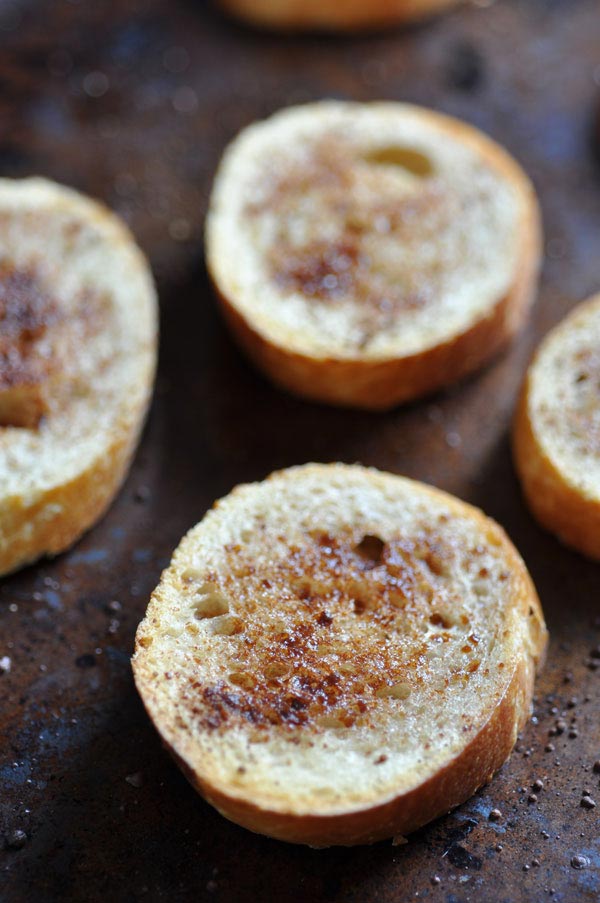 STEP TWO – Toast the pecans until they release their oil and are lightly toasted and crispy.

STEP THREE – Sauté the diced apples in a bit of vegan butter and cinnamon until they’re fork tender. 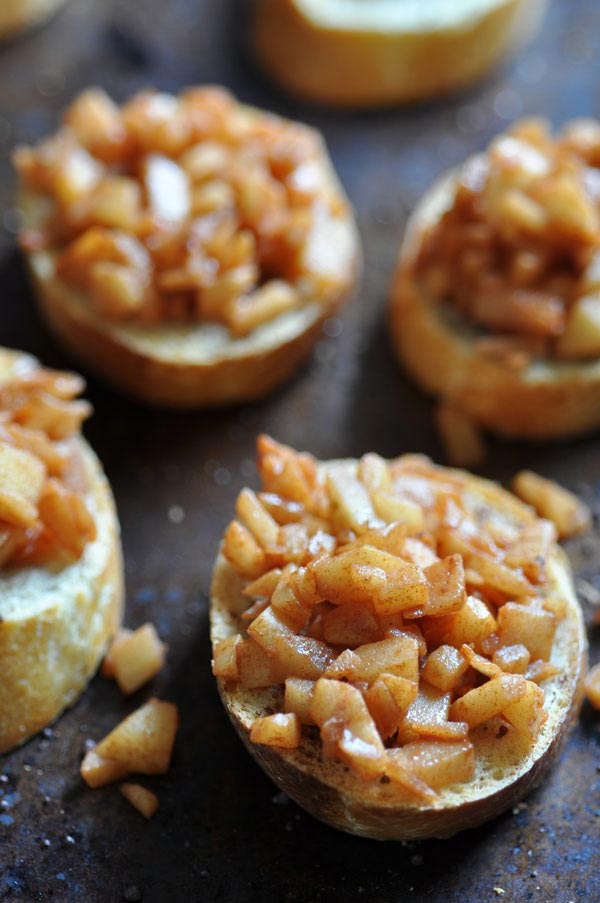 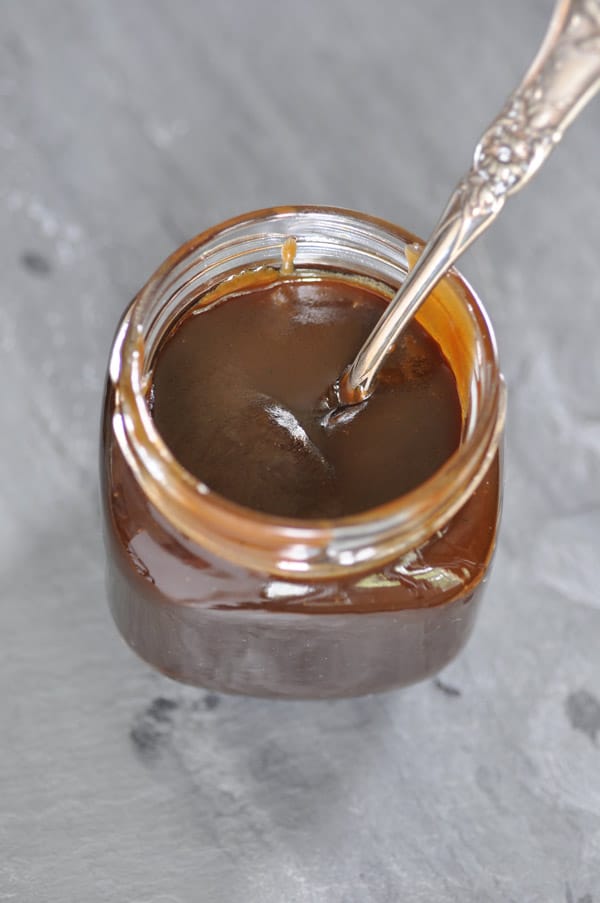 STEP FIVE – Spoon a pile of apples on the toast, sprinkle some chopped pecans over the apples, then drizzle the caramel sauce on top. 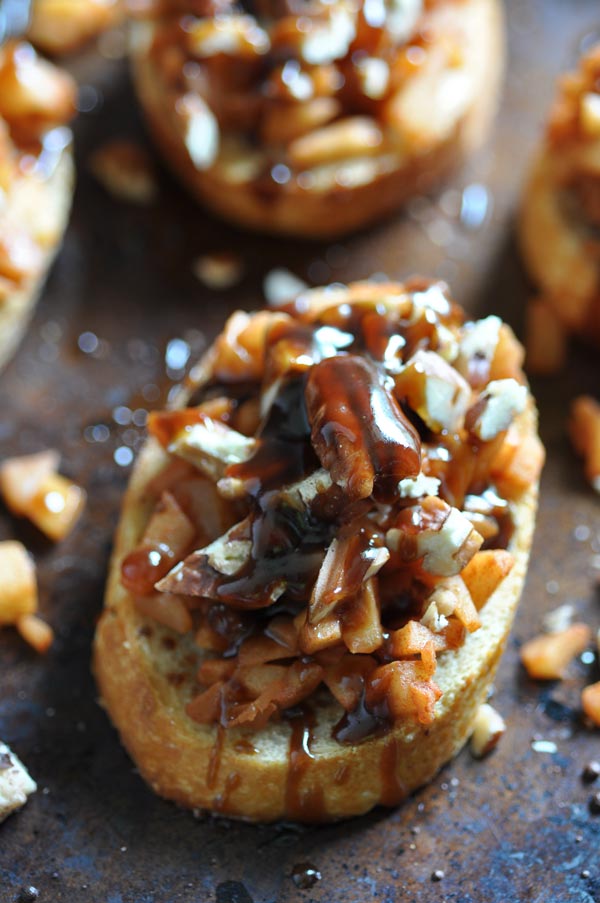 You’re going to love, love, love all of the flavors and textures going on in this dessert. From the crispy bread, to the soft apples, and the crunchy pecans, there is a surprise in every bite. Then there’s the slightly sweet apple, the savory cinnamon, and the salty sweet caramel sauce. It’s the best. 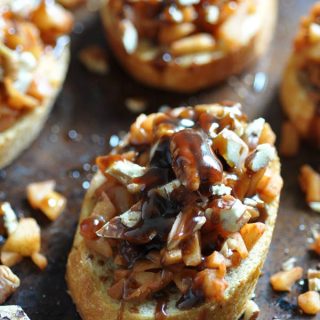 For the Cinnamon Toast

For the Salted Caramel Sauce

For the Cinnamon Toast

For the Salted Caramel Sauce

To Construct the Bruschetta

The Nutrition Facts are an estimate only. Notes For the salted caramel sauce, make sure that you use CULINARY coconut milk. You can find it in the baking section of most grocery stores. It will not work if you use canned milk or the kind you find in the refrigerated section. Also, you won't taste the coconut in this sauce, so don't worry if you don't like the taste of coconut.