An easy and not dry gluten-free and vegan banana bread? Yep, I went through several different gluten-free flour combinations before finally settling on an all-purpose flour. This bread is actually as close to regular banana bread as you're going to get. So pour yourself a cup of tea and slice off a big piece and enjoy. 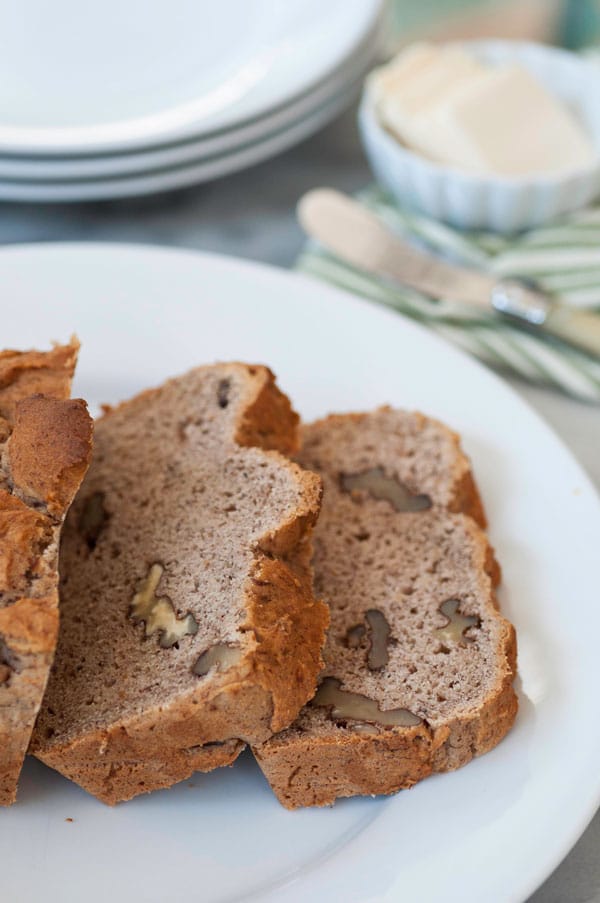 My future son-in-law tried this and really liked it. He said, "It tastes like bananas and doesn't have the texture of sand." LOL! Now, that may not sound like a raving endorsement, but it is, because he also said that it was really good and then proceeded to eat more.

The problem with baking with gluten-free flours, especially when you add vegan "eggs" to the mix, is that the end result can turn out really dry.

I'll never forget the first time I had a gluten-free vegan cookie at a local tea shop several years ago. I took one bite and thought that there must have been a mishap in the kitchen, because it literally had the texture of sand. It was so dry and gritty.

Don't get me wrong, I've had some really good gluten-free vegan baked goods, and that's why I knew that I could create a vegan and gluten-free banana bread that's tender, has a nice crumb, and isn't dry.

It took me several tries to get it just right, and fortunately, the first, second and third attempts were not bad. Translation: Not bad means edible.

The first three attempts either didn't rise as well as it should have, it was too crumbly, or it was too wet and just wouldn't bake to a firm bread texture.

As luck would have it, I could have saved myself a lot of time and calories by using the ready made flour. Oh well, that's the hard part of being a food blogger.

Another realization that I had while making  this bread was, using coconut sugar in place of cane sugar is not always going to work. 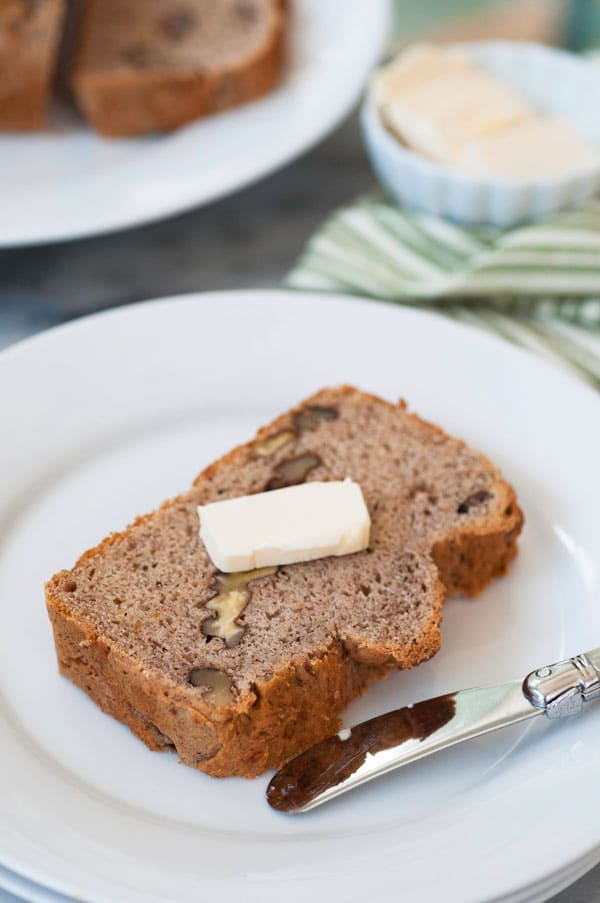 WHY CANE SUGAR IS A BETTER CHOICE FOR BAKING

I like using unrefined sugar whenever I can, however, when it comes to vegan gluten-free baking, it doesn't always yield the best results.

There is a science behind using refined sugar when it comes to baking. It creates structure and chewiness, it's a leavener, and when sugar and water molecules bond they create moisture, which prevents cakes, cookies, and breads from drying out too quickly. Coconut sugar doesn't do this, hence, one of the reasons that when you're cooking with gluten-free flours, sometimes it's best to use regular old sugar.

Now, if you eat gluten, but you don't eat refined sugar, check out our Classic Homemade Vegan Banana Bread. It's rmade with maple syrup and coconut sugar.

One more thing about the ingredients in this gluten-free banana bread, it's oil-free. We used almond butter instead of vegan butter.

Overall, this is a healthy banana bread recipe, if you can get past the ½ cup of refined sugar. I did use a ¼ cup of maple syrup to reduce the amount of white sugar.

HOW TO MAKE BANANA BREAD THAT'S GLUTEN-FREE AND VEGAN

This is a one bowl recipe! It's super easy to make, so have at it.

First - Mash the bananas in a large mixing bowl, then add the rest of the ingredients (except for the flour) and stir it all up until it's well combined.

Second - Add the flour and stir until just combined. You don't want to see any dry flour. If you need to add a bit more almond milk, do so by the tablespoon. The batter should be thick, not watery.

Third - Spoon the batter into a parchment lined bread pan and spread it evenly throughout the pan. Bake for approximately 1 hour.

Fourth - Let the bread cool in the pan for five minutes then take it out with the parchment paper and let it cool on a wire rack.

NOTE: I love walnuts in banana bread, if you do too, add a half to a whole cup to the batter before baking.

This bread is so perfect for an after school snack, a college care package, or a quick and easy breakfast. It's also pretty awesome with a cup of tea in the afternoon. 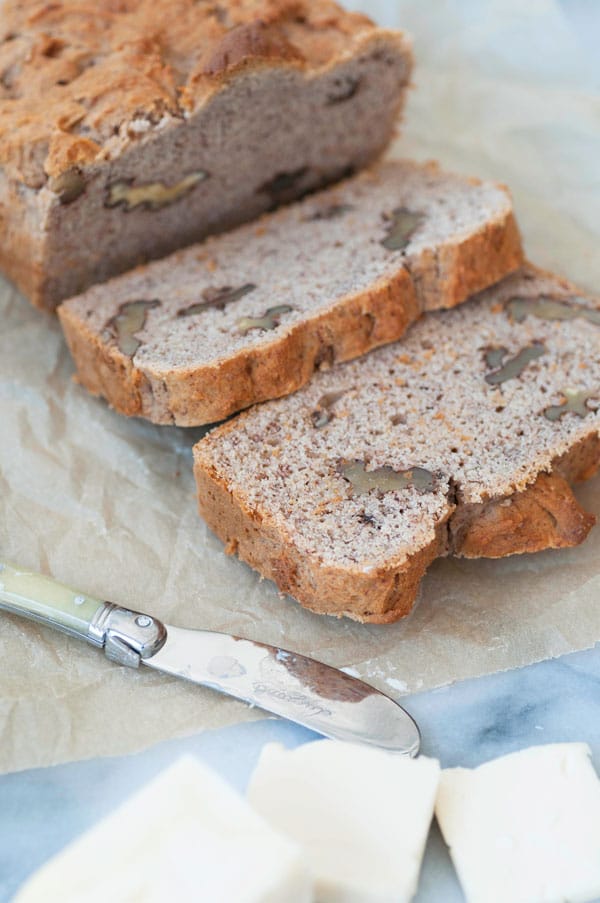 PRODUCTS WE USED FOR THIS RECIPE 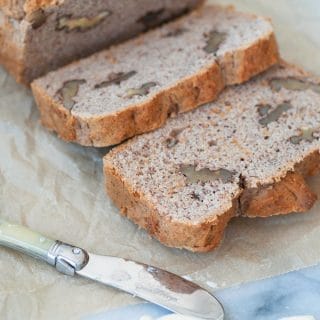 This can be stored in the freezer for up to 3 months. The Nutrition Facts are an estimate only. 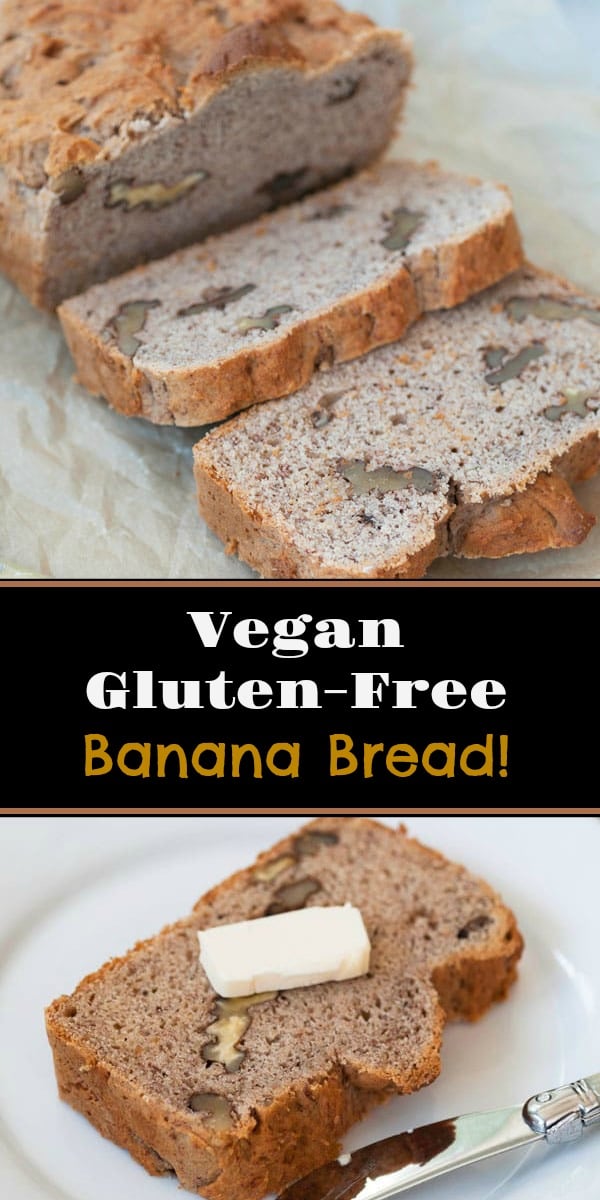