Black Bean and Grilled Corn Salad with a Southwestern Flair

Hot and steamy weather calls for a cool, bright, and fresh salad. This Southwestern inspired black bean and roasted corn salad with lime and cilantro was the perfect meal to cool me off and fill me up.

The Southwest is scorching, as is most of the country right now. Chicago has been blanketed with hot and humid weather and it's almost too hot to eat; it takes too much energy. I’d rather drink water and nibble on popsicles instead of eating a heavy meal. So when my husband offered to make this black bean, corn, tomato, and pepper salad dressed with tangy lime, I enthusiastically said yes.

This girl wasn’t about to turn down one of my favorite dishes, especially since I didn’t have to make it.

There are so many flavors going on in this dish and they go together beautifully. There’s the bright and tangy taste of lime, earthy and moody cumin, fresh and curious cilantro, spicy poblano pepper, and sweet corn and bell pepper.

Not only will you get a mouthful of flavors, you’ll also get several textures in this bean and corn salad. The black beans are cooked until they’re firm, yet creamy. The raw bell pepper and onion adds a nice crunch, the corn is chewy, and the tomatoes are crisp and juicy. One bite will wake up your taste buds and have them asking for more.

This spicy black bean and grilled corn salad can be eaten as a meal; it has plenty of protein and it’s filling if you pile it up on your plate. You can also serve it as a dip, a side salad, or put it in tacos or burritos.

Now that I’ve shared this Southwestern black bean and corn salad recipe with you, I’m going to put some in a bowl with a few corn chips, go outside and find some shade, and enjoy the heat.

Notes on the Beans: Don’t overcook the beans. They should be soft and creamy on the inside but nice and firm on the outside. Start testing them after ten minutes to make sure you don’t boil them too long.

Notes on the Corn: You can grill the corn in or out of the husks. If you grill them in the husks soak them in a pot of water for about thirty minutes before grilling so the husks don’t burn up and the water creates steam to cook the corn.

Notes on the Spices: This recipe isn’t too spicy, to me anyway. If you’re sensitive to spicy food then add a small amount of the chipotle powder to the beans and then taste them. You can always add more, but you can’t take it out once it’s there.

Notes on the Limes: The acid from the limes will help to finish the cooking process of the beans and vegetables so it's important to squeeze the juice of the first lime into the mixture while it's hot. The second lime goes in once the salad is cool.

Do us a favor, we want to show the world that plant-based foods are delicious and exciting. So let's connect and share all of this awesomeness with the world. Hop on over to our Facebook page and give it a like, and follow us on Instagram and Twitter, and follow us and share this and other Veganosity recipes on Pinterest. We'd be so grateful if you did. If you like this recipe and can't wait to see what we're going to share next, subscribe to Veganosity. Just fill in the subscription box above our picture in the top right corner of the page. And, Alex and I love hearing from you, please leave a comment and let us know what you think of our recipes. 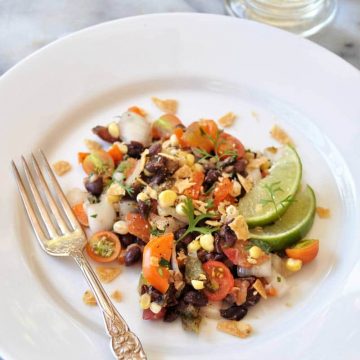