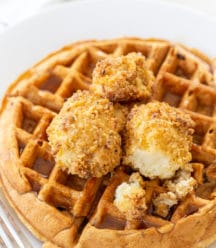 A crispy on the outside and tender on the inside Belgian waffle, topped with the crispiest cauliflower chicken, then drenched in warm maple syrup. The perfect Southern brunch or dinner recipe.

For the Cauliflower Chicken
Use JUST egg or Follow Your Heart Vegan Egg and follow the directions on the box for 3 tbsp.
To make this recipe gluten-free, replace the flour with cornstarch or gluten-free all-purpose flour. Replace the breadcrumbs with gluten-free breadcrumbs.
To make this oil-free, omit the oil, just know that they won’t turn out as crispy and the color won’t be as golden.

The cauliflower chicken can be stored in the refrigerator for up to 3 days and reheat in the oven so the breading crisps up.

Freeze it in a freezer safe container for up to 3 months. Thaw overnight in the refrigerator and reheat until the breading is crispy.

You can also freeze the waffles for up to 3 months, but we suggest making them just before serving for the best texture.