Twitter and the media outlets were all abuzz yesterday over a guacamole and peas recipe in the New York Times. In case you missed it, it was such a mind blowing idea that President Obama chimed in. And so did Republican presidential candidate, Jeb Bush. They both agreed—miracles do happen—that peas don’t belong in guacamole. 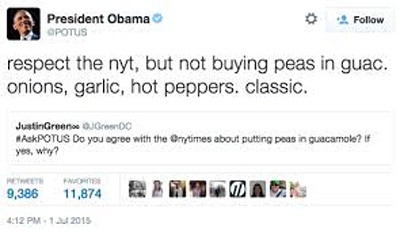 First, I really hope that their “people” are tweeting and not them, because there’s a lot of shit going down in this world, and guac with peas is not one of them. I don’t even have enough time in a day to tweet about things I should be tweeting about (think marketing for my blog), so I know that the President of the United States doesn’t have that much spare time. But I digress.

Second, grown-ups are supposed to try something before they say that they don’t like it. I know Barbara raised you better Jeb. 😉

Because of all of the ruckus over this recipe, and because I had six perfect avocados sitting on my kitchen counter, I decided to add peas to my guacamole recipe and see what the big deal was. Boy, was I happy that I did!

This is just so brilliant, that it makes me mad for not thinking of it myself. I took one beautiful and spot free—miracles really do happen sometimes—avocado, and one cup of peas, and red onion, jalapeno, cilantro, tomato, lime, and salt, and I made guacamole that tasted just like the guac that I made a few days ago, only this time it had pureed peas in it. The only thing that the peas added was volume. Awesome!

This is so fantastic for all of us guacamole lovers, because California avocados are projected to be expensive and hard to find because of the epic drought that poor state is experiencing. And if that’s not bad enough, a fungus is killing avocado trees in southern Florida. Less avocados means less guacamole, unless you supplement with peas. And supplement I shall!

Because I love my guacamole recipe, I didn’t want to try the NYT’s recipe, so I just stuck with what I like. To make my recipe all you need to do is take one cup of peas and puree them until they look like bright green baby food. Then, mash an avocado in a medium bowl and mix them together. Last,add some diced red onion, a diced jalapeno, one diced tomato, the juice of one lime (don’t skip this), and salt to taste, and stir them together. Easy peasy. Yes, pun was intended.

The peas don’t add any flavor, but they do double the size. Instead of using two avocados, I only needed one to fill this bowl. So, I’m saving money, and reducing fat and calories. One cup of peas = 118 calories and 0.6 grams of fat and 1 avocado = 234 calories and 24 grams of fat. This is why you should put peas in your guacamole folks: You don’t taste them, it doubles the recipe, and it’s lower in fat and calories!

I’m so grateful that the world was in such a frenzy over the thought of adding peas to guacamole, because from this day forward, I’ll be saving money, calories, and fat, all because of a simple recipe in the New York Times, and Twitter.

Are you on team peas or team avocado only?

Are you going to try this recipe?

Two things I used to make this recipe:
Click on the image to purchase.

Why You Should Put Peas in Your Guacamole

The peas in this recipe add volume and reduce fat and calories, but you won't taste them. It tastes like avocado.

Healthy vegan recipes that will keep you strong, fit, and satisfied.
12shares