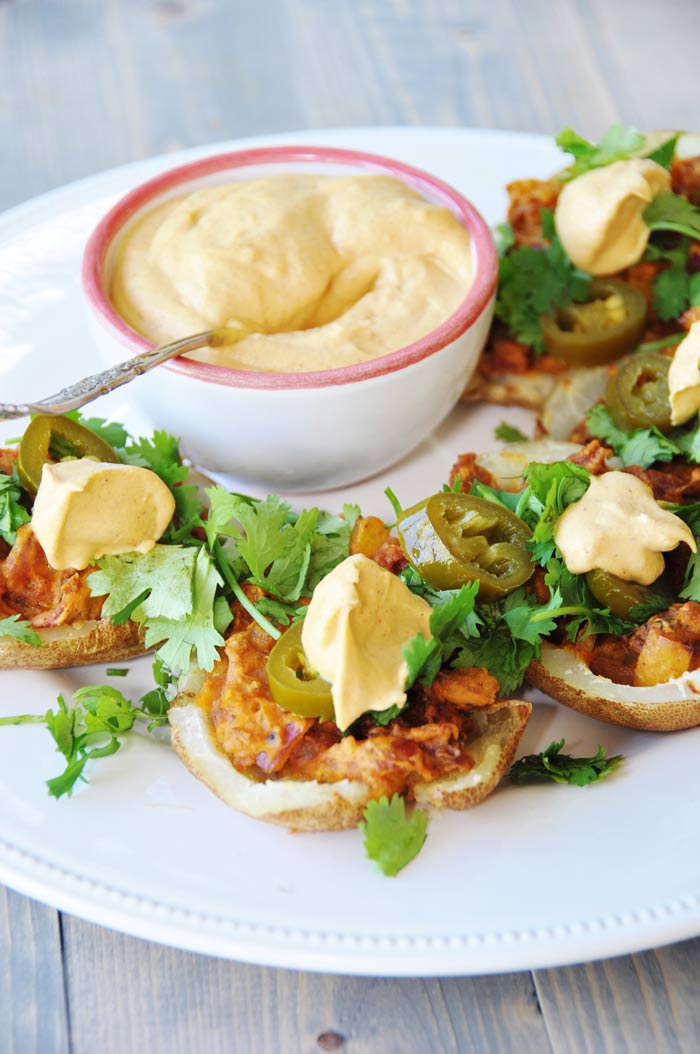 Did you think that I fell off of the face of the planet? Did you even notice that I’ve been gone? I’ll explain later, but right now…. 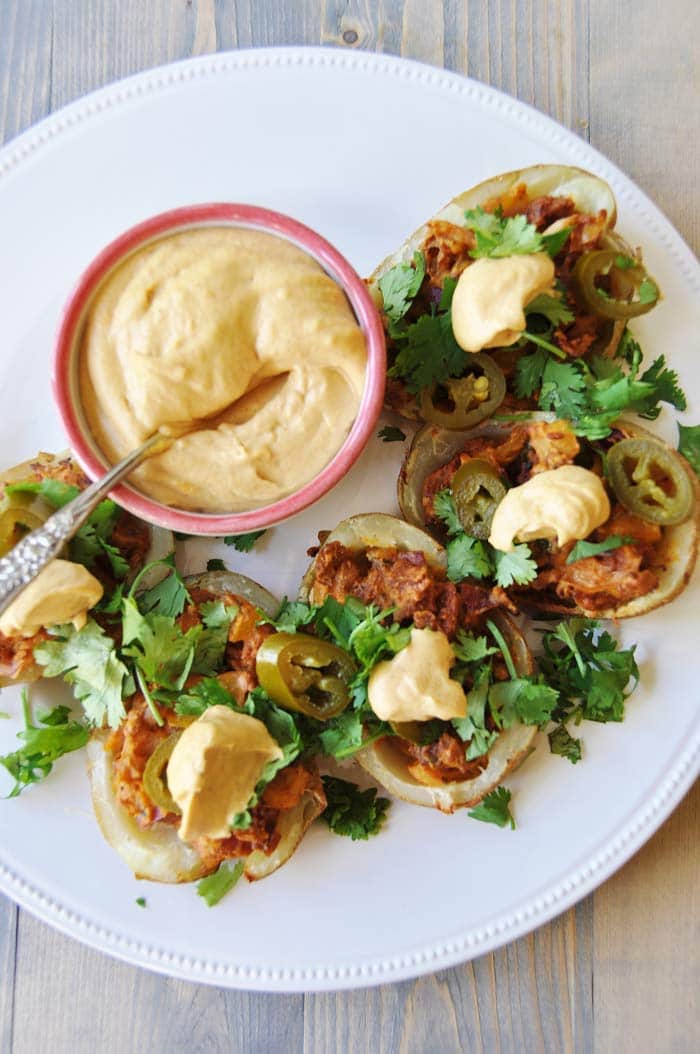 If you know one thing about me it’s the fact that I’m a football fan. I love me some good ole old competitive college/NFL football. Although this week I really don’t like anything that starts off with the word, “ole.” Like, Ole Miss. Boooooo!

However, these gorgeous vegan stuffed Mexican potato skins are winners, and they’ll help me get over the horrifying loss that my husband and I watched in person last Saturday evening at Bryant Denny Stadium in Tuscaloosa, Alabama.

But whatever, we had fun anyway,  because there is nothing like a Bama game. Yes, this happened.

Y’all, these stuffed potato skins are all that and then some. You get crispy potato skins and savory/spicy almond cheese, kick-ass Field Roast Mexican chipotle sausage, hot jalapenos, and fresh cilantro. Can you handle all of this awesomeness in one place?

Let’s start with the almond cheese recipe which was inspired by my friend, Sophia at Veggies Don’t Bite.

This thick, ooey gooey cheese takes a little time to make, but it’s soooooo worth it. You’ll need to bake the potatoes—but you would anyway to make the skins—and soak the almonds in boiling water for several hours. Okay, the water won’t stay hot, but it needs to start off boiling. Once the almonds are nice and plump it’s time to peel the skins off. If you have kids, ask them to help out. It’s a great project that will keep them busy in the kitchen.

Once the almonds are skinned and the potatoes are baked and cool enough to handle it’s time to make the cheese!

Put the almonds, a clove of garlic, the potatoes, sea salt, chipotle chili powder, nutritional yeast, some ground annatto, lemon juice, and hot water in a high powered blender and blend until it’s thick, smooth, and creamy. You shouldn’t see or taste any whole pieces. The consistency should be exactly like melted cheese. This is why you need to soak the almonds for hours.

Look at this stuff. Can you stand it? I want to eat the entire bowl with that spoon.

Once you’ve made the cheese you’ll need to combine it with the sautéed garlic, onion, jalapeno pepper, yellow bell pepper, chili powder, and cumin, and Field Roast sausage that you sautéed while the potatoes were baking. Trust me, your mouth will be watering as you mix this stuff up.

Now it’s time to stuff the potato skins with the cheesy filling and bake for about ten minutes. When you take them out of the oven and plate them, sprinkle on some sliced jalapeno peppers from a jar for an extra kick and then liberally throw some chopped cilantro on top. Put a huge dollop of the almond cheese on top and just try to eat just one. I dare you. 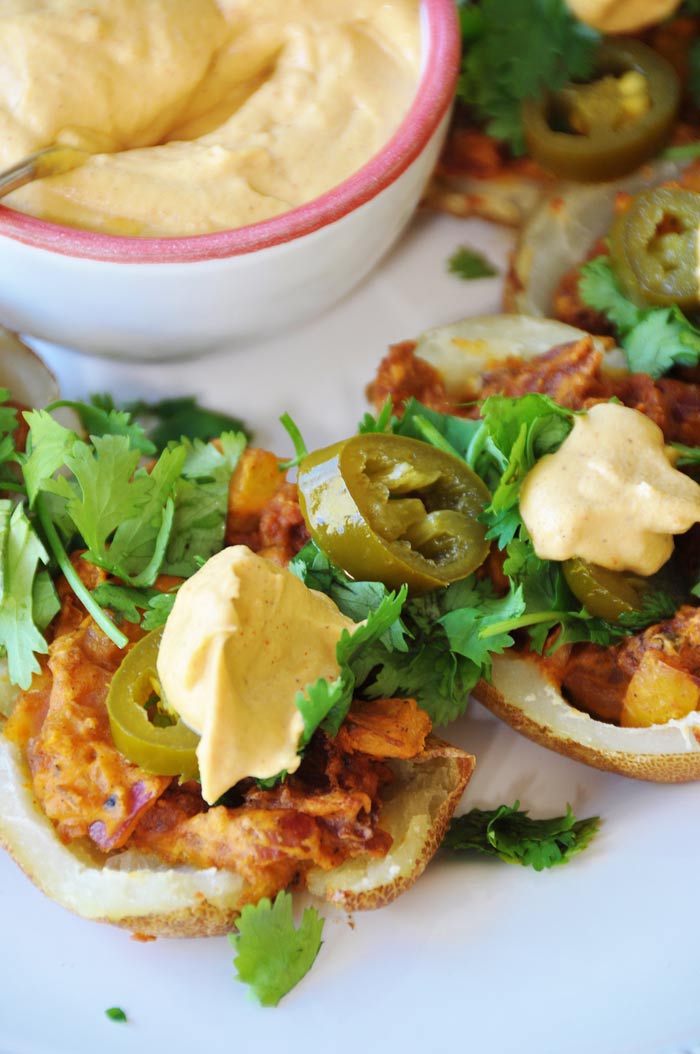 These vegan stuffed Mexican potato skins are the perfect appetizer, especially for game day. Your non-vegan friends will be begging for more. That’s how good these are.

Now that I’ve shown you how to make these bad boys, I’ll tell you where I’ve been hiding for the past five days.

My husband and I spent a night in Nashville on Thursday night on our way to visit our son and his beautiful girlfriend in Tuscaloosa, where they go to college. It was the nicest weekend. 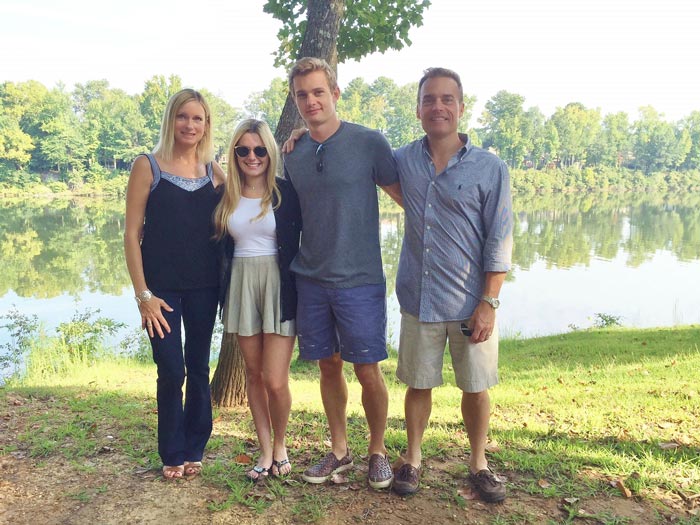 On Wednesday I spent the better part of the day writing and scheduling Thursday and Friday’s posts, as well as doing laundry and packing for the trip.

At 12:15 am I had finally finished the Friday Fitbit, What I Ate Wednesday, and Other Ramblings post and was about to schedule it when I don’t know what happened, but the entire post disappeared. GONE. Effing GONE! I frantically tried everything that I knew to get it back, to find it in the vast land of virtual nothingness, but it was GONE.

If not for the fact that I was getting out of dodge with my husband on a much needed long weekend vacation I think that I would have had a breakdown.

At the point that I finally realized that I was going to have to a) rewrite, or b) skip Friday’s post, it was 1:00 am. I wiped away my tears, said forget it, and turned off my computer.

As anxious as it made me to skip that post, I was more anxious to finish packing and get some sleep before we left in the morning.

The drive home took us twelve hours and I knew that I needed to finish writing Monday’s post, but we didn’t get home until close to midnight and I just couldn’t think straight. Better to write in the morning.

Monday morning came, and it went, and I didn’t get the post done because I felt overwhelmed with how much I’d missed on my social media pages. I had to catch up and I just didn’t have the time to do it all. Instead of stressing out after I’d just had a relaxing and enjoyable weekend, I said, forget it. Again.

I could have posted on Tuesday, but I never post on Tuesday, so I decided that I’d stick to my blog schedule and resume on Wednesday. And here I am.

Did you miss me? I missed you, and it’s good to be home.

I think I need some vegan stuffed Mexican potato skins to get me back into my routine.

Have you ever been to Nashville?

Have you ever just said, forget it, and took a break? It felt good, didn’t it?

Healthy vegan recipes that will keep you strong, fit, and satisfied.
77shares