Vegan Pecan & Tarragon Thanksgiving Stuffing! This pecan stuffing is a family recipe that we haven't shared until now. We're confident that you're going to love it as much as we do. 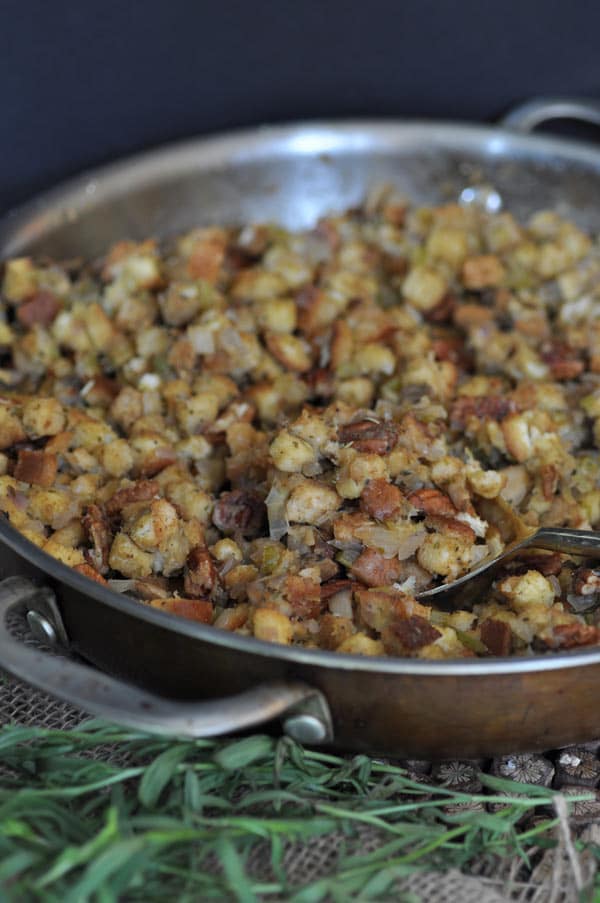 Stuffing (or dressing, depending on where you’re from) that’s shoveled into the carcass of a turkey, filled with sausage or (gasp) gizzards, or flavored with the juice of a bird is so pre-2017. Who does that anymore? Even when we did eat turkey for Thanksgiving we didn’t put it inside of the poor creature, and we didn’t add meat to it. Maybe our stuffing foreshadowed our future vegan lifestyle? Hmmm…..

The Breakfast King invented this vegan stuffing way before we became vegans. It is, and always has been, one of our family's favorite Thanksgiving sides, and for good reason. It’s freaking delicious!

It's filled with sautéed mushrooms, a Vidalia onion, shallots, celery, white wine, dried Italian seasoning, fresh tarragon, plain breadcrumbs, no-chicken broth, and sea salt and black pepper. The pièce de résistance is the spiced pecans. He toasts them in a cast-iron skillet with sea salt, black pepper, curry (if you don't like curry you can add cumin or just leave it out), and a bit of cinnamon sugar. They’re savory and slightly sweet, and they add a fabulous crunch to the Thanksgiving dressing.

The best thing about this traditional family stuffing recipe, aside from eating it, is the way it makes your kitchen smell. Heavenly. We all know how intoxicating the aroma of onions and celery can be, and when you add the wine for deglazing and the Italian seasoning and fresh tarragon, it rises to another level. Culinary perfume is what I like to call it.

Making it from scratch is so easy. There’s no need to buy it. It only takes about an hour from start to finish, and you can make it a day or two before if you want to. Just cover it and heat it up in a warm oven until the center is hot. If it’s too dry after heating it, just add a little broth and put it back in the oven until it’s warm.

HOW TO MAKE VEGAN THANKSGIVING STUFFING FROM SCRATCH

First – Chop and dice the mushrooms, onion, and shallot, then sauté until slightly caramelized.

Second -  Deglaze the pan with a bit of white wine and add the herbs, salt, and pepper

Third – Add the breadcrumbs and toss to combine the mushroom and onion mixture.

Fourth – Pour in the vegetable broth and fold the breadcrumbs until they’re uniformly moist and remove from the heat.

Fifth – Toast the pecans with some sea salt, black pepper, curry, and cinnamon sugar. The fragrance from the spiced pecans is wonderful.

Finally – Fold the pecans into the stuffing until evenly distributed and roast in the oven until the top is golden brown and crispy.

Now that you know how to prepare Thanksgiving stuffing with spiced pecans and fresh herbs, let’s talk about how to store it,  and what to serve it with.

As I mentioned, you can make your dressing a day or two before if you like. Store it covered in the refrigerator until you’re ready to eat it. When you’re ready to heat it up, cover the pan with its lid or aluminum foil and place it in a 300°F (149°C) oven for approximately 20 minutes, or until heated through. If you want the top to be extra crispy you can put it under the broiler for a minute or two, just watch it carefully to avoid burning.

Holiday meals can be challenging for new vegans, and we’re here to help you. Take a look at our Vegan Holiday Meal Plans, click here. and here. These will help you prepare a delicious Thanksgiving or Christmas dinner that your family and friends will love. Yes, even your non-vegan friends will be impressed.

Make Greg’s aka The Breakfast King's easy homemade vegan pecan stuffing for your next holiday meal, or just because you’re in the mood for some, then come back and let us know what you think. We love to hear from you. 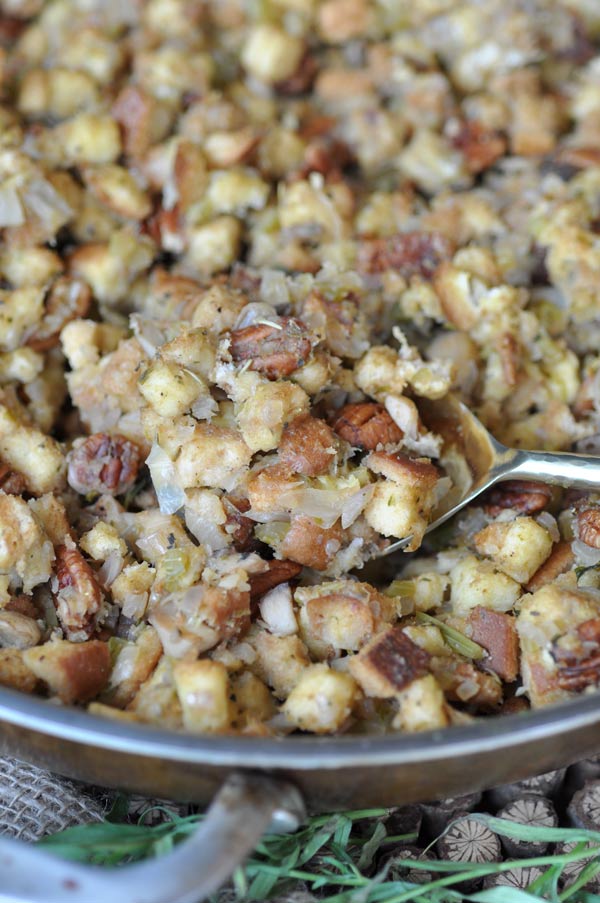 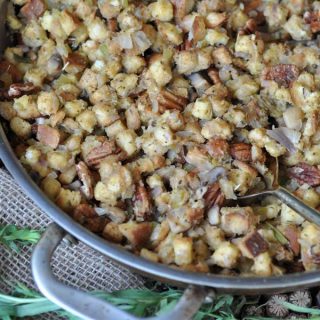 If you don't want whole pecans in your stuffing, feel free to chop them. If you're not a fan of curry you can use cumin instead, or just leave it out. The Nutrition Facts are an estimate only.

560shares
Healthy vegan recipes that will keep you strong, fit, and satisfied.