Kale and Spinach Wrap with Hummus and Vegan Ricotta Cheese 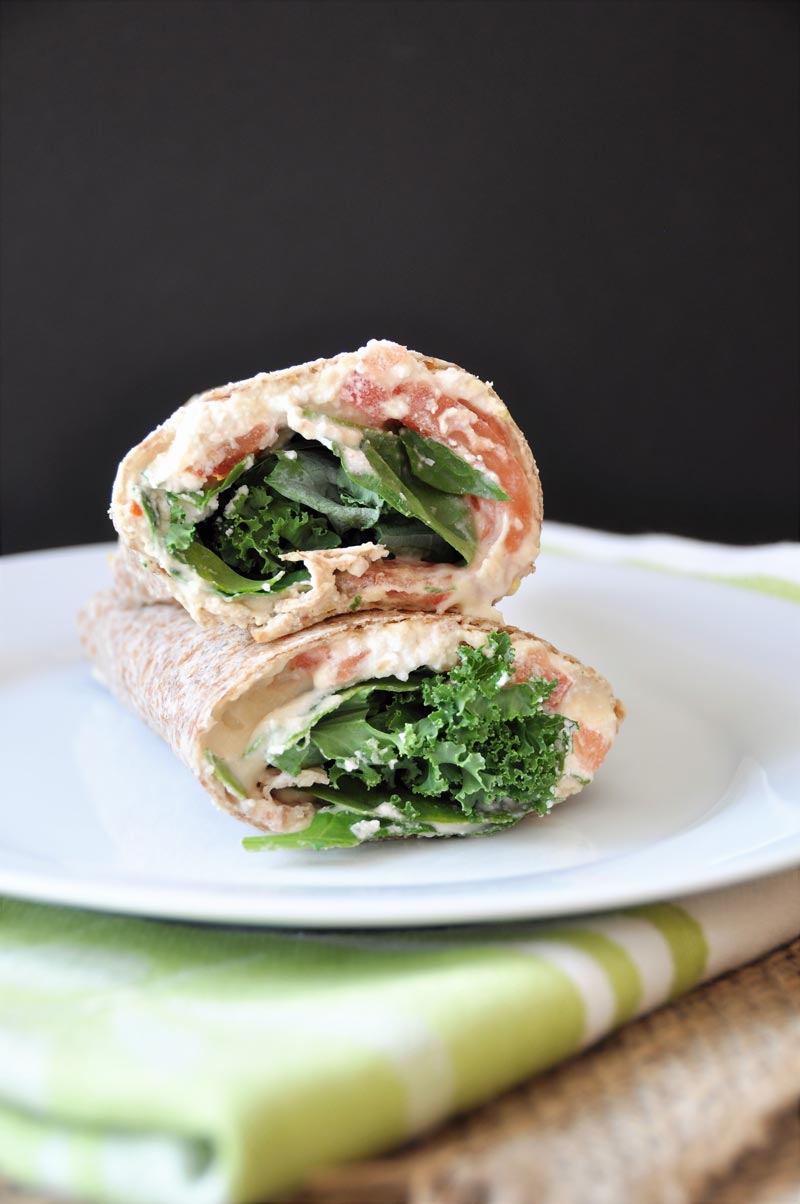 Summer is winding down. Makes me so sad. Don’t get me wrong, I love fall in the Midwest. The colors, the crisp morning and evening temperatures and warm afternoons, and the new seasonal foods are awesome. I’m one of those pumpkin spiced latte people. I also love pulling out my sweaters, jeans, and boots; there’s something to be said for the change of seasons. Until we get to the middle of January……

Just thinking about winter makes me itch. That’s why I’m giving you all one more burst of summer recipes, because I get the feeling that I’m not the only one who wants the sun and warm breezes to stick around. 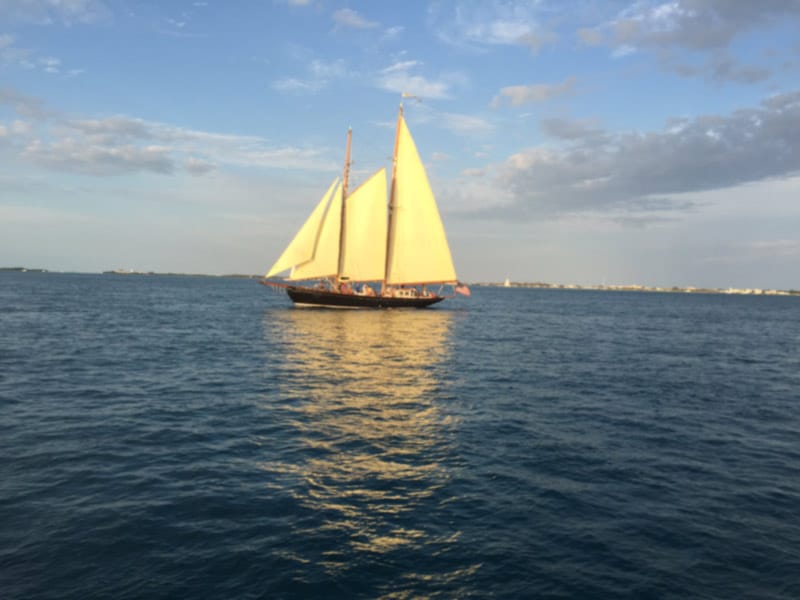 Do you all love hummus as much as I do? How could you not? Chickpeas, savory spices, and that creamy texture is just so likeable. And of course, it’s full of clean protein and other healthy things.

Hummus is my favorite filling to wrap up inside of a whole grain tortilla. That’s why this ridiculously easy sprouted grain hummus wrap with vegan ricotta cheese, spinach, tomatoes, and kale has been my go to lunch recently. 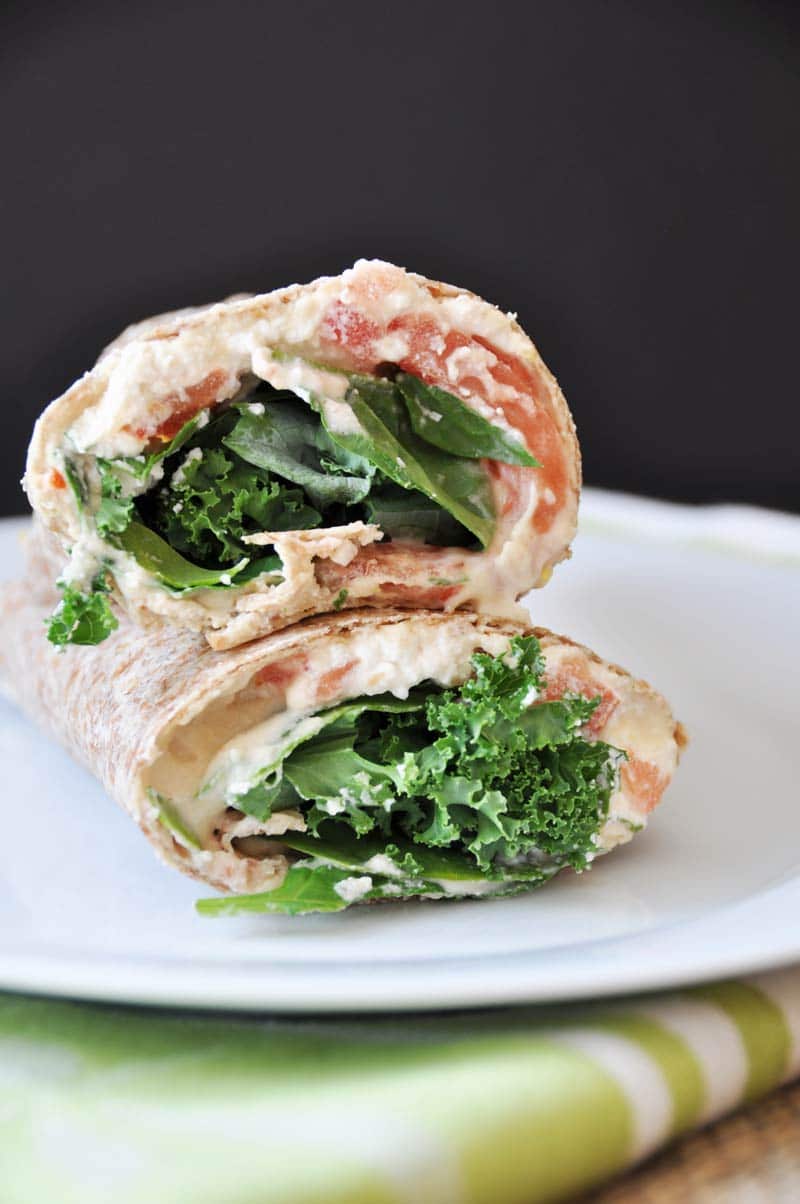 I love it so much that I made about ten of them and cut them into rolls to share with my tennis team when we were competing for the State Championship last weekend. They were a hit, and they kept us fortified on our celebratory drive back home. You can read about it here.

My BFF/neighbor also loved it when I made one for her the other day, so I thought, why not share it with you?

This is the kind of sandwich—wraps are considered sandwiches—that you can take to work, to school, the beach, or eat in the sanctity of your home sweet home. 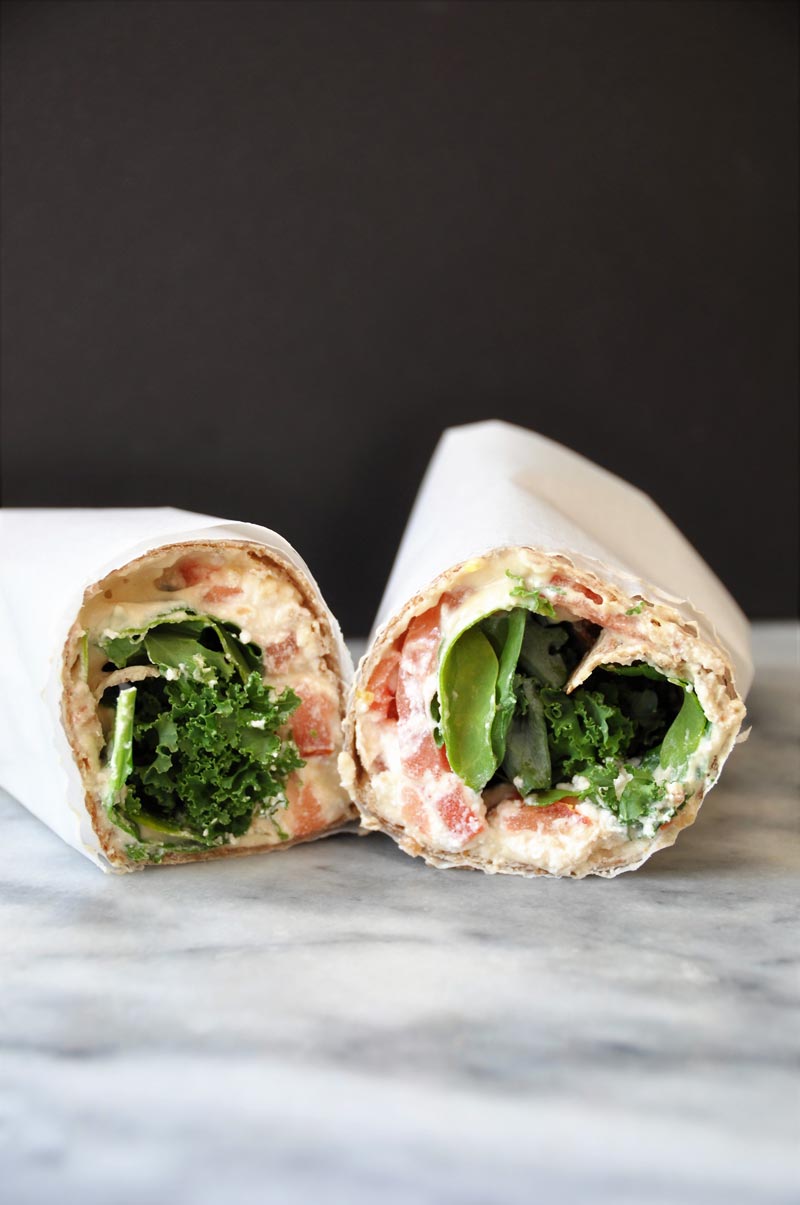 There really isn’t a lot more to say about this healthy kale, spinach, and hummus wrap, except that it’s easy to make and even easier to eat, because it’s so good!

How to Make a Hummus, Vegan Ricotta, Kale, and Spinach Wrap

Lay an eight inch tortilla on a flat surface.

Put three tablespoons of hummus in the center of the tortilla and evenly spread it around, leaving a one inch border.

Fold the sides over and then begin rolling the end closest to your body until the wrap is complete.

It really doesn’t get any easier than this. 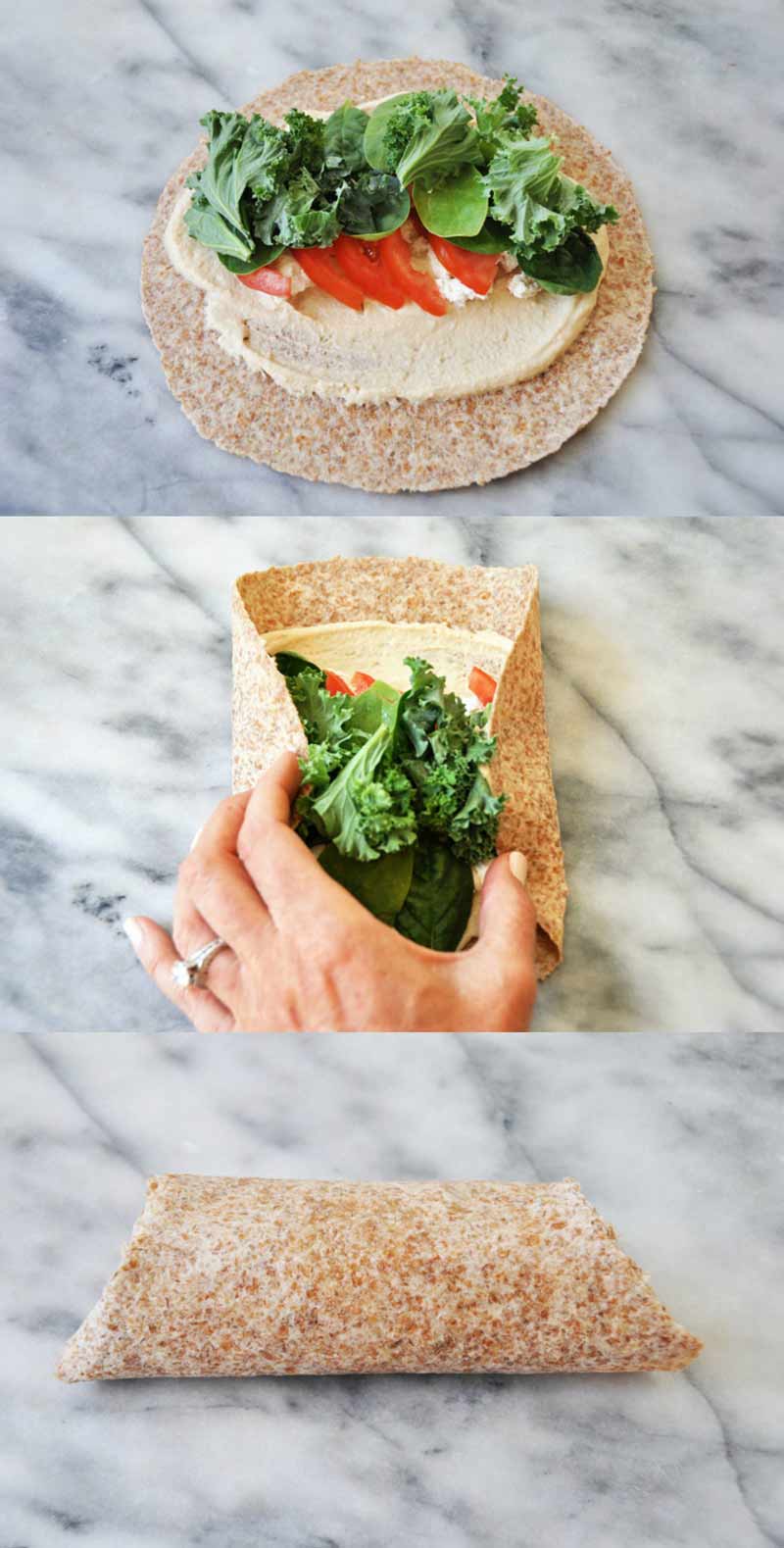 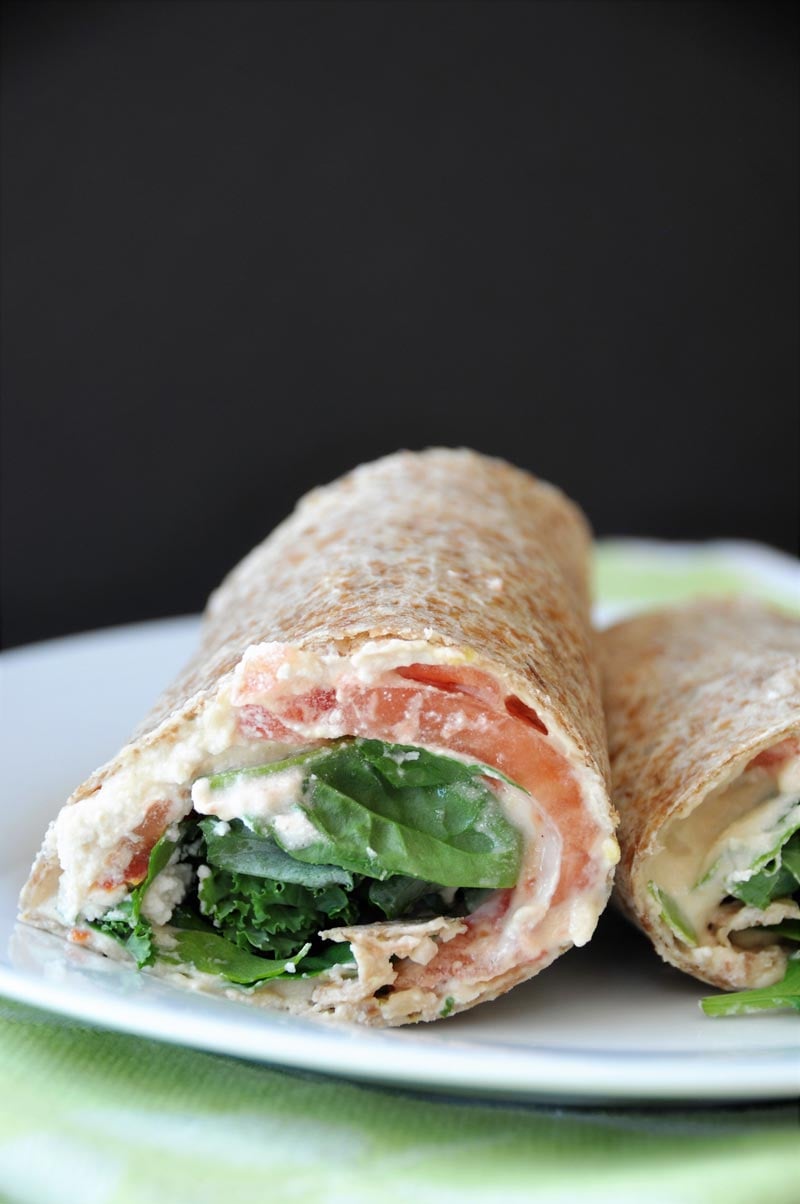 Notes on the Hummus: You can buy ready-made hummus or make this recipe.

Notes on the Tomato: Make sure you take the seeds out of the tomato or the juice will make the wrap wet.

Notes on the Vegan Ricotta Cheese: I buy Kite Hill’s ricotta cheese at Whole Foods. Check their website to see if it’s sold in a store near you. If not you can substitute with any vegan cheese that you like.

Notes on the Tortilla: I buy Engine 2’s sprouted grain tortillas, but any brand will work.

Do us a favor, we want to show the world that plant-based foods are delicious and exciting. So let's connect and share all of this awesomeness with the world. Hop on over to our Facebook page and give it a like, and follow us on Instagram and Twitter, and follow us and share this and other Veganosity recipes on Pinterest. We'd be so grateful if you did. If you like this recipe and can't wait to see what we're going to share next, subscribe to Veganosity. Just fill in the subscription box above our picture in the top right corner of the page. And, Alex and I love hearing from you, please leave a comment and let us know what you think of our recipes.

A healthy, easy, and satisfying wrap made with hummus, vegan ricotta cheese, kale, and spinach.

102shares
Healthy vegan recipes that will keep you strong, fit, and satisfied.