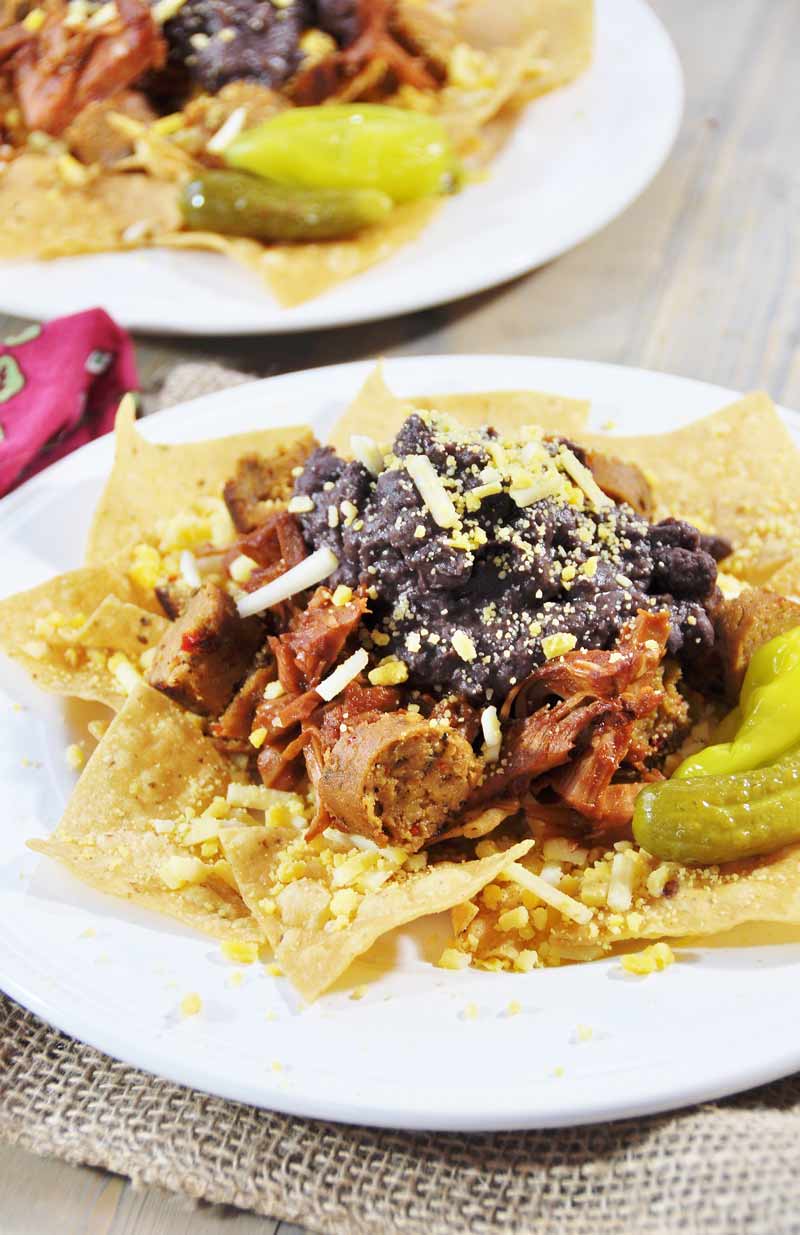 Holy Moly! Have you seen my favorite HGTV show? Fixer Upper, with Chip and Joanna Gaines? It’s my latest obsession. I’ve been known to watch reruns of this show (I hate reruns) because once just isn’t enough. That’s where this Vegan”Gut-Pak,” inspired by Fixer Upper and Vitek’s recipe came from. No. Animals. Harmed.

In one of the episodes, my favorite television family since the Brady Bunch, went to Vitek’s restaurant in Waco, TX. The whole adorable gang ordered gut paks.

A gut pak is like a big nacho filled with meat and cheese, and Fritos.

What in the world? That’s me channeling my inner Chip.

The original gut pak is one big meat and cheese fest. Gross, gross, and so unhealthy. The visual of this dish stuck with me for several days, and I must confess, the thought of it made me feel sad. After about day three I knew that I had to make a vegan gut pak. Why? Because I wanted to set my mind right with a cruelty-free version, and maybe, just maybe, convince a meat eater or two, or the Gaines’ family, that you can eat food like this without actually eating animals. 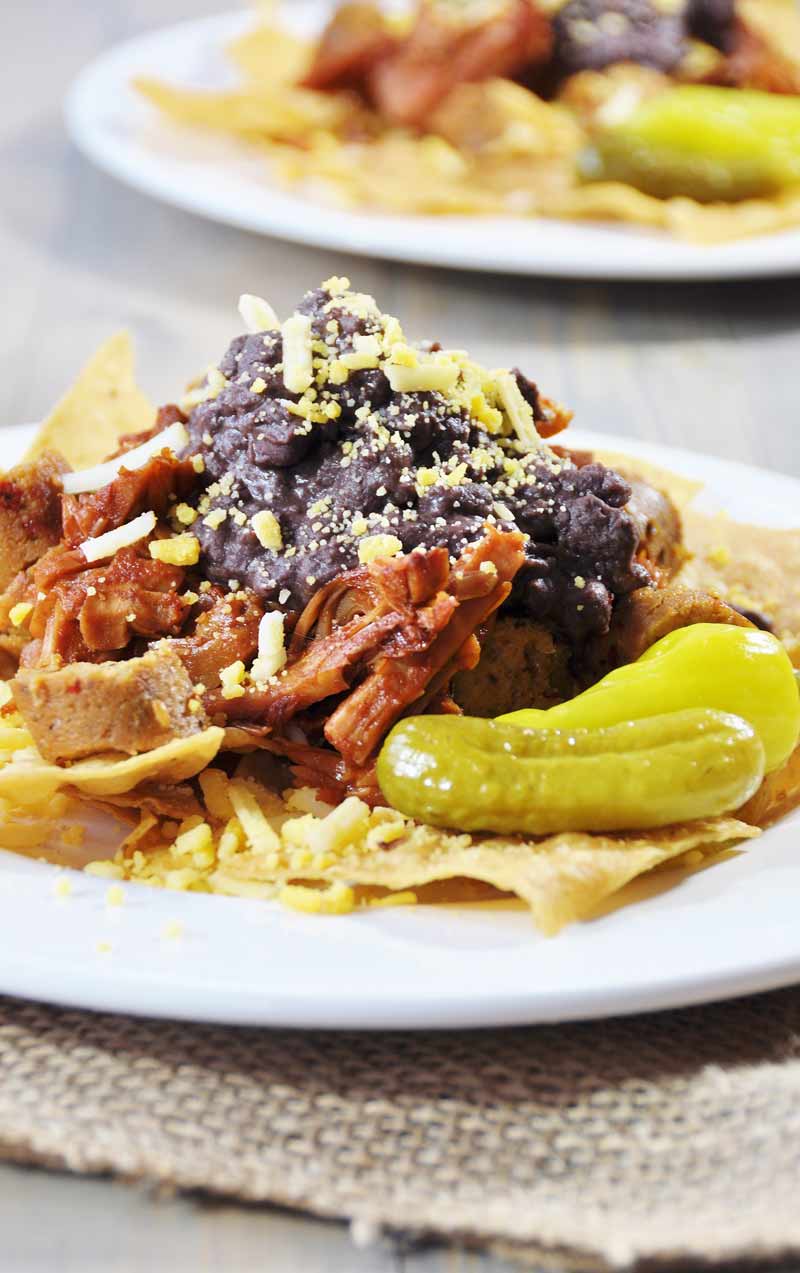 My son is home from college and the smell of the vegan sausage woke him from his slumber at 12:30 pm. He walked into the kitchen and took one look at the gut pak and a huge smile came over his face.

“No grasshopper, not nachos, this is a gut pak,” I said.

He cocked his head like a confused puppy. So cute.

I have to say that he was right, it really is like nachos, especially since I used corn chips instead of Fritos. And my vegan version is flipping delicious! Although it’s filling and heavy, which I’m assuming is where the name “gut pak” came from, it’s really satisfying. Word to the wise: Eat this when you have time to digest, no intense workouts should be planned after ingesting a gut pak.

I could have made my own BBQ jackfruit and black beans, but I wanted to create something that was not only delicious, but quick and easy. This is the kind of recipe that I could see making for a football game or on a busy week night.

It took me approximately fifteen minutes to make this and about five to eat it. Yeah, it was that good. Don’t judge.

If you’re looking for a fun, hearty, easy, and fast dinner, this is it. It would also make a great appetizer if you put it on a platter. Like nachos! 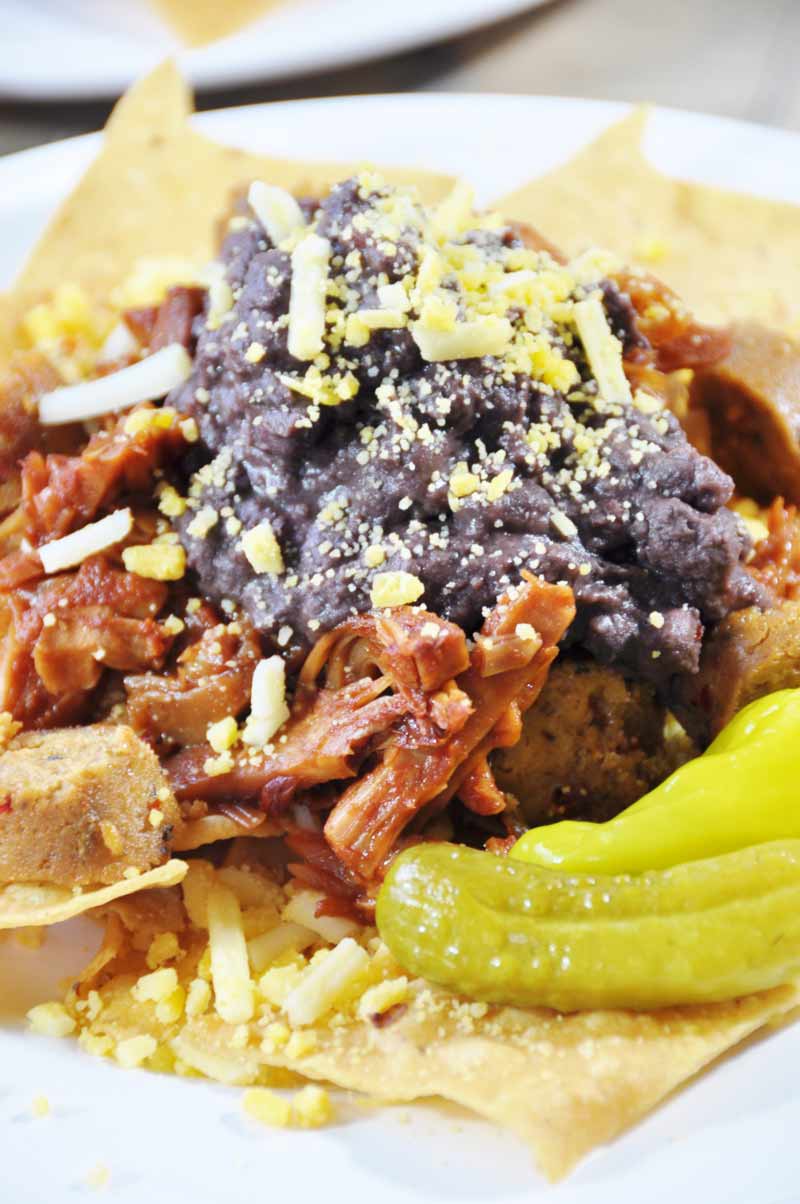 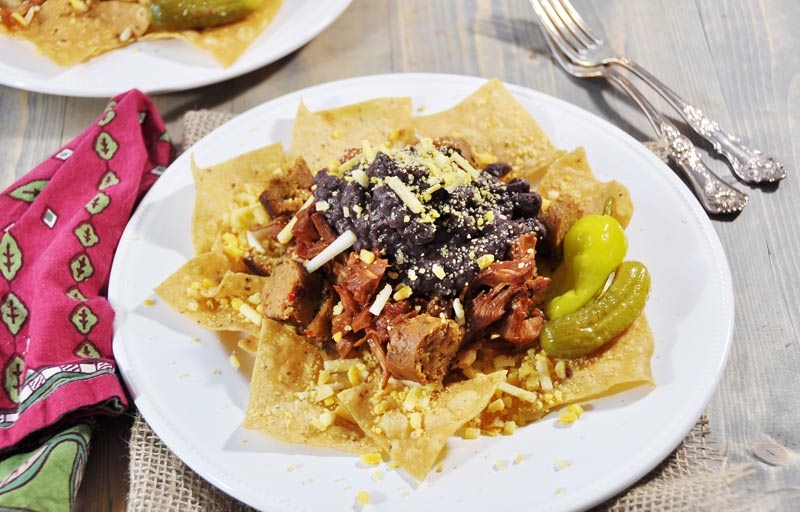 Do you love Fixer Upper as much as I do?

Did you see the episode where they went to Vitek’s for gut paks?

Would you make this a meal or an appetizer?

Veganosity is a participant in the Amazon Services LLC Associates Program, an affiliate advertising program designed to provide a means for sites to earn advertising fees by advertising and linking to amazon.com. We make a small commission when you order from Amazon. It helps us afford the groceries to develop all of our recipes, and to pay for the maintenance of our site. We thank you in advance for your consideration.

Inspired by the gut pak from Vitek's shown on HGTV's Fixer Upper. It's a quick and easy meal if you use the ready made ingredients that I love.

Healthy vegan recipes that will keep you strong, fit, and satisfied.
1shares