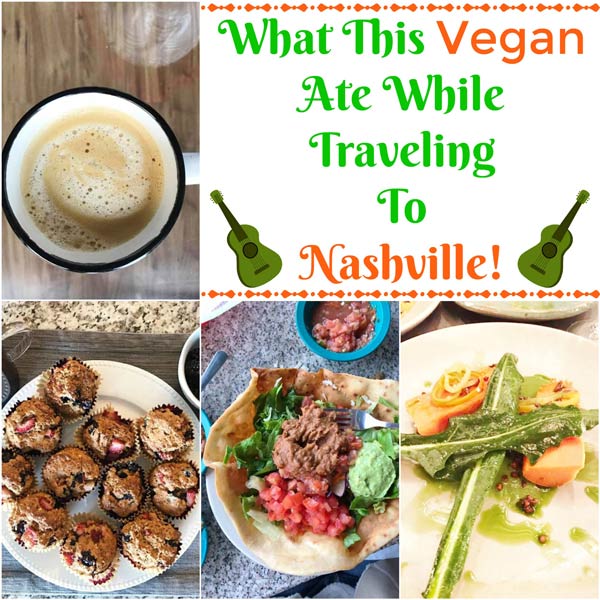 Hey, y'all! How've you been? Did you have a good week and are you ready for the weekend? I sure am. Last weekend we drove to Alabama to visit my son and his lovely girlfriend at school. We spent a night in Nashville, Tennessee to break up the drive, and we had a blast. Have you been? If not, you should try and get there. It's a vibrant big/small city with friendly people, pretty parks, an amazing music scene, and fantastic restaurants. I was happily surprised to see that in one year (we stayed a night last year too) the veggie vibe has improved a lot. I didn't have any trouble finding  good food, and every one of my servers were totally cool and supportive of my dietary restrictions. Props to you, Nashville!

Because I had the opportunity to travel and eat well while away from home, I'm going to switch things up a bit this week. Instead of sharing what I ate in a day, I'm going to share some of my best meals from last weekend. Sound good?

We left for Nashville on Thursday morning and I had a glass of lemon water, a cup of coffee, and two pieces of toast with pumpkin butter and chia seeds before we hit the rode. 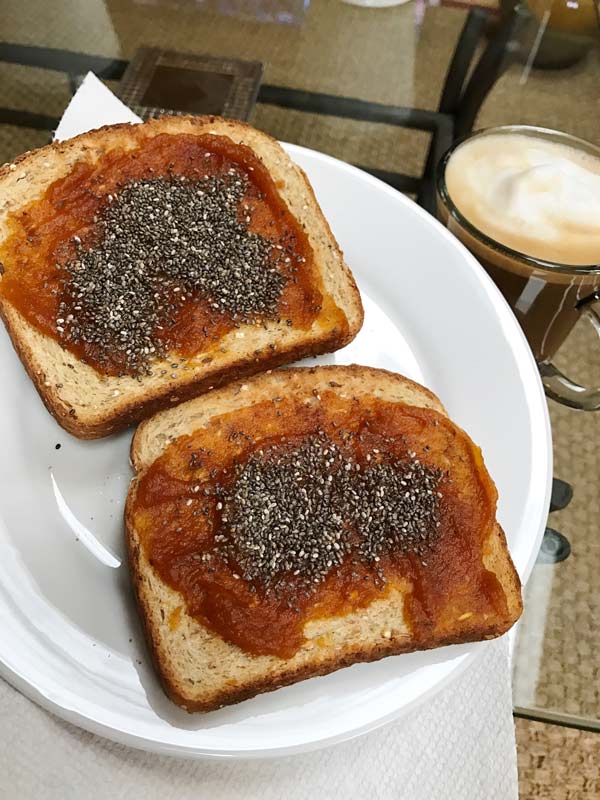 We stopped for lunch in Indianapolis and I had a black bean burger with sauteed veggies and a glass of white wine. My husband insisted that I have the wine because I was making him crazy with my, "look out for that truck!" backseat driver behavior. He thought it would take the edge off of my control freak personality. It worked for a little while. 😉 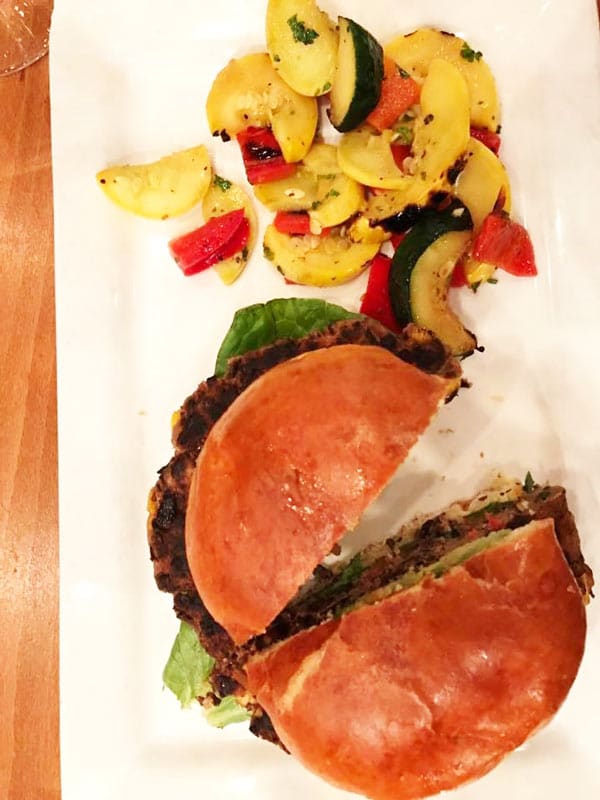 We stopped for gas about an hour out of Indy so I bought my favorite traveling snack. Twizzlers! Don't judge, we're all allowed a little junk food from time to time.

After a seven hour drive we finally arrived in Nashville and checked into the Hutton Hotel. We had an issue with our first room so we waited about fifteen minutes to be transferred to another. I'll save you the details for the sake of the Hutton's reputation. But, let's just say that the only thing that prevented me from writing a negative review about them on Trip Advisor was the fact that they upgraded us to a penthouse suite. Will we stay there again next year? My honest answer is probably not. I was truly shocked and disappointed by the first room they gave us and I think I may have to try a different hotel next time.

Anyway, once we got settled into our room we freshened up and headed out the door to The Treehouse for dinner. Holy moly! I'm in love with that restaurant. It's so dang cool! It's rustic, but modern and edgy all at the same time. We sat on their heated patio and it felt like we were eating somewhere in the country rather than the middle of a city. The music was super cool, our server was cooler, and the menu and the food rocked. Check out their menu.

Most things, if they're not already, can be made vegan at The Treehouse. My husband and I ate tapas style, starting with CAROLINA NUGGET SWEET POTATOES with GREEN CURRY, PUFFED RYE BERRIES, PICKLEDSWEET PEPPERS, DANDELION GREENS. Can I just say that I could have had three more servings of those potatoes and greens. Unfortunately my pix are awful because it was really dark. Trust me when I tell you that the presentation of every dish was exceptional. 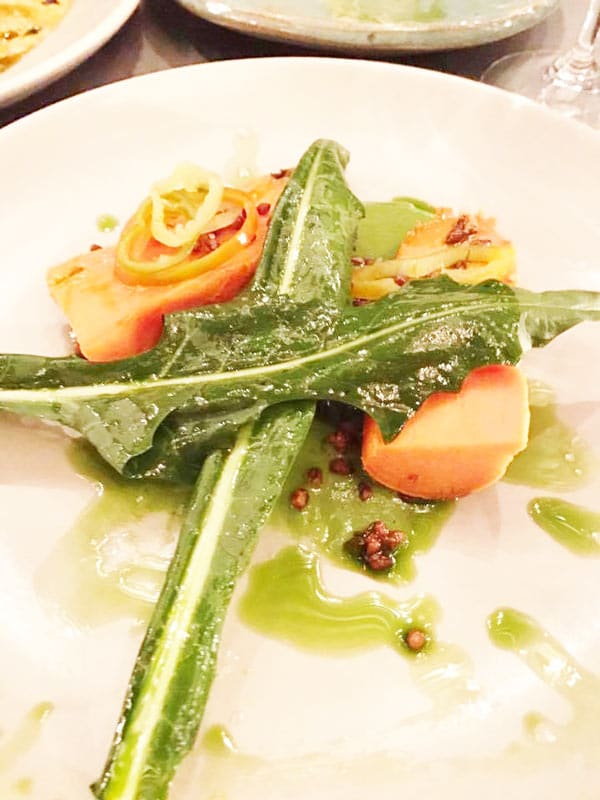 We also shared AMBER GOLD TURNIPS with SUNFLOWER SEED GREMOLATA, FERMENTED GREENSTRAWBERRY EMULSION, SUNFLOWER SPROUTS and WHOLE ROASTED SUNCHOKES with PEANUT COCONUT MILK, PUFFEDRICE, SORREL. It doesn't look like a lot of food, but I was stuffed by the end of dinner. 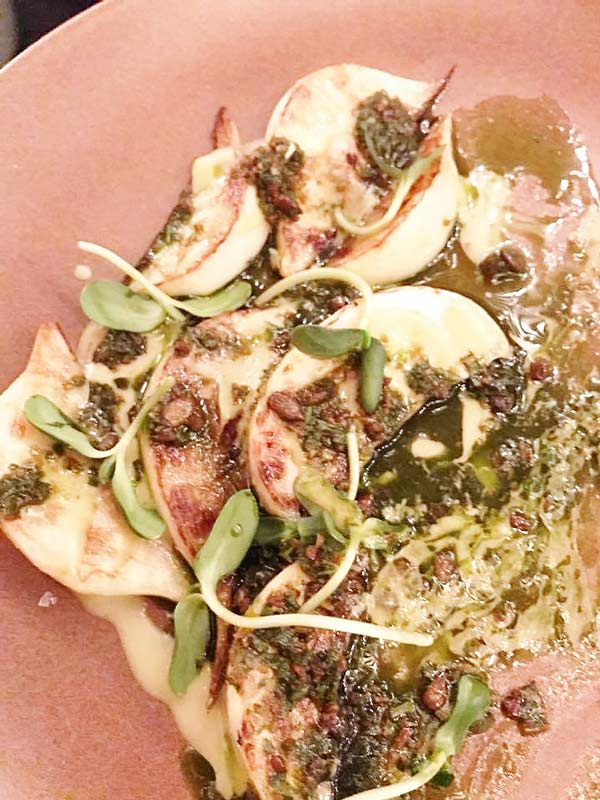 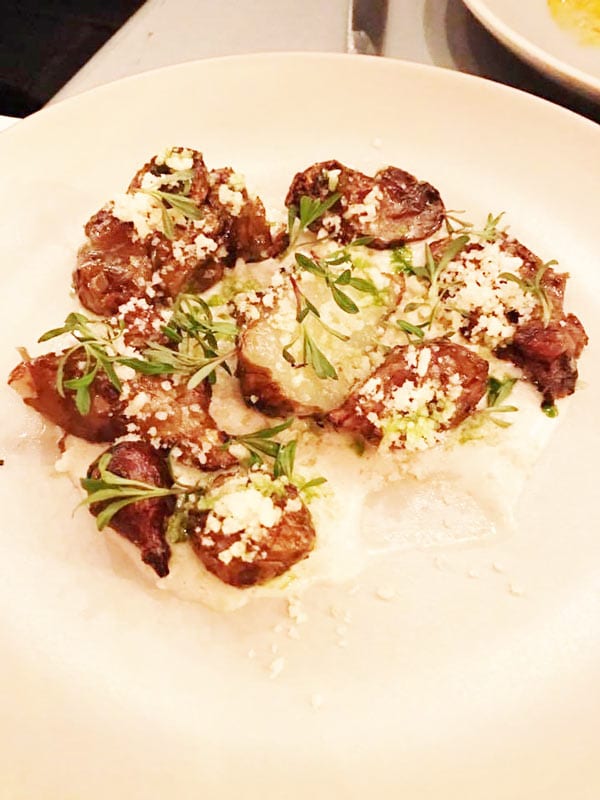 After dinner we walked around lower Broadway where there is one club/honky tonk after the other. We went into Legends Corner  and stayed until one thirty in the morning. Waaaayyyyy past this girl's bedtime.

In the morning we ordered coffee with almond milk, whole grain toast, a fruit platter, and hash browns from room service. Props to the hotel's kitchen, the potatoes were really good! We checked out of the hotel at 11:00 am and did a little tour of the city and then stopped for lunch at Chuy's Mexican restaurant. The menu was meat and cheese centric but I made it work. I ordered a taco salad without cheese (our server forgot to omit the cheese so I scraped it out of the bowl) and a side of vegetarian refried beans. Of course, we started with guacamole. Why wouldn't we? 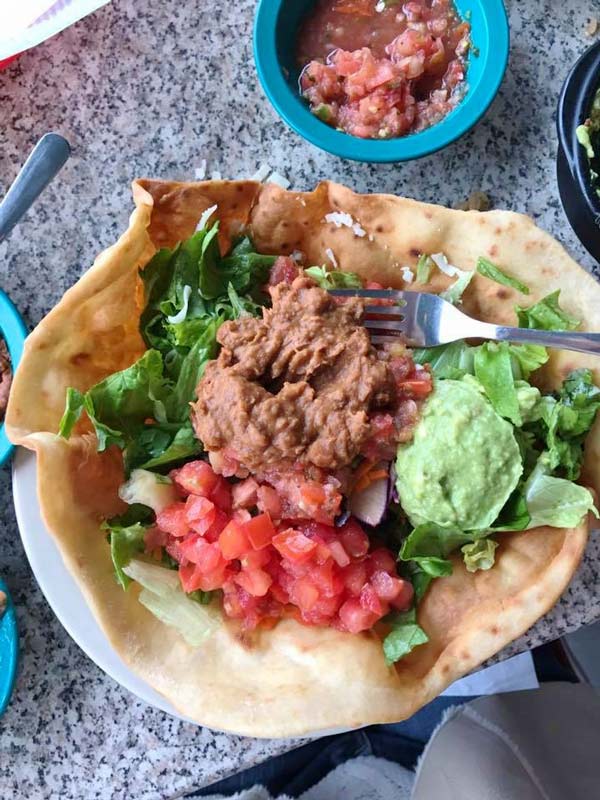 It was only a three and a half hour drive to the University of Alabama so we didn't eat anything until we arrived to my son's apartment. He and his sweet girlfriend fed us hummus and pita bread before we headed out to dinner.

We had dinner at The Side by Side, created by Chef Chris Hastings, winner of the 2012 James Beard Award. My son called ahead to ask if they could accommodate a vegan and they said that they'd be happy to  and that I should just talk to our server. Our server was a darling young woman who couldn't have been any nicer, however, she was clearly worried about asking the chef who was on duty that evening (it wasn't Chef Hastings) to create something for me. She said that the staff was afraid of him and that he had once thrown bread at her. I told her that I'd be fine with a salad, but she insisted on asking him to make me something more substantial. She came back and asked me if a pasta and vegetable dish would be all right, and I, a pasta lover, enthusiastically said, "Yes!"

It. Was. Horrible. It was bland. It was greasy. The vegetables consisted of carrots and potatoes. I mean, really? What chef worth his weight would put two starchy vegetables in pasta? There was zero creativity or effort put into my dish and I felt like he was giving me the big ole' finger for not wanting to eat an animal. My son and his girlfriend felt horrible, and that made me angrier at the chef because they had no control over what he chose do serve me. It's really too bad because we'll be back in Tuscaloosa soon for my son's graduation, and I can promise you that we won't be dining there for his celebratory dinner.

Enough of that, on to better things.

Saturday morning we were treated to vegan whole wheat strawberry and blueberry muffins that my son's girlfriend made for us. They were delicious! I ate three with a cup of coffee and fresh blackberries, and then we headed out to the football game. 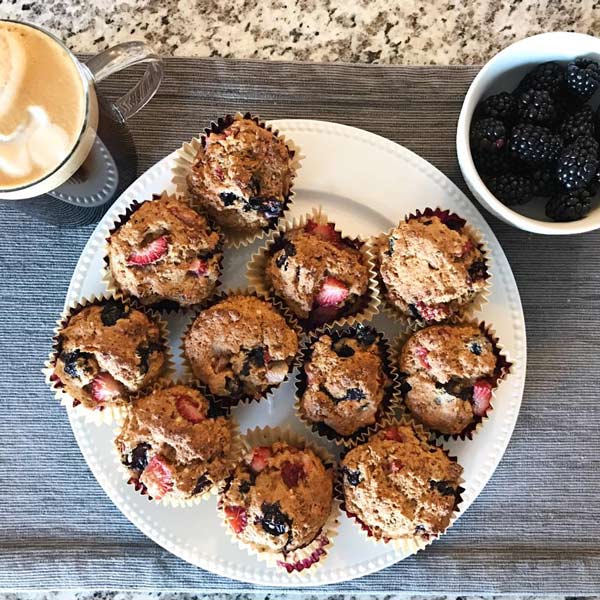 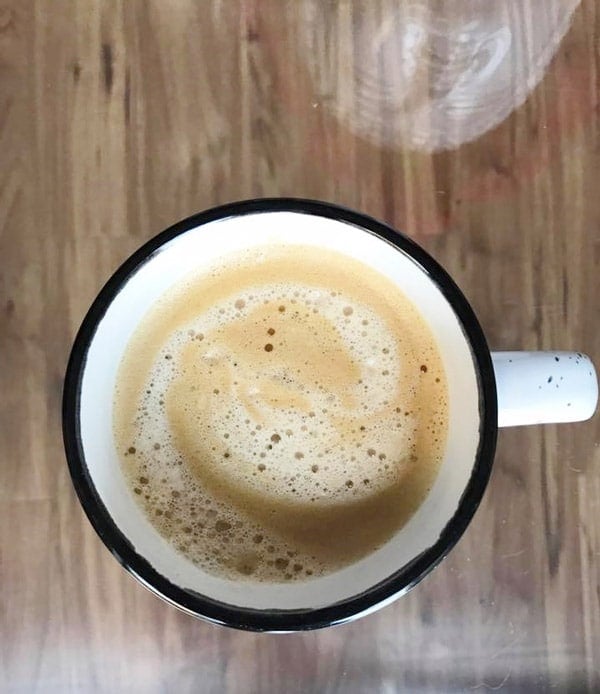 At the game we snacked on giant soft baked pretzels and butter free popcorn. 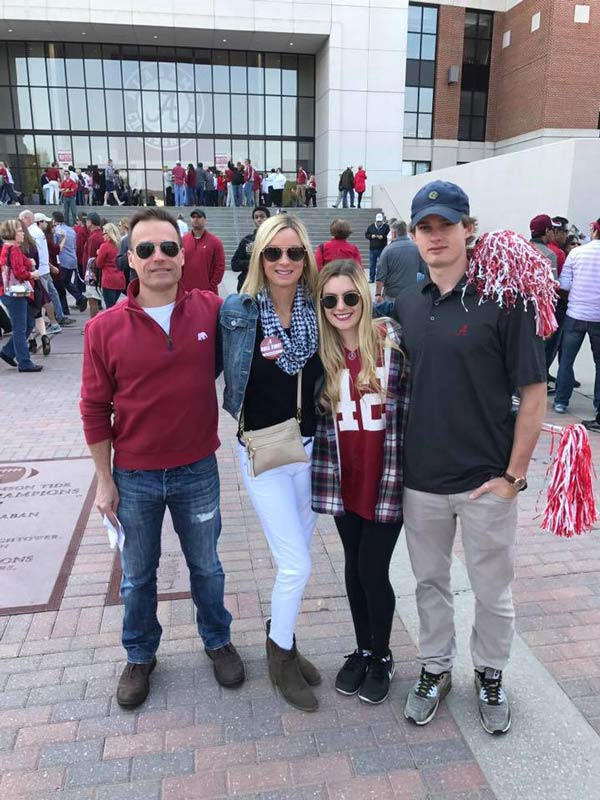 After the game we went back to my son's apartment and ate guacamole and chips and played Cards Against Humanity until it was time for dinner. 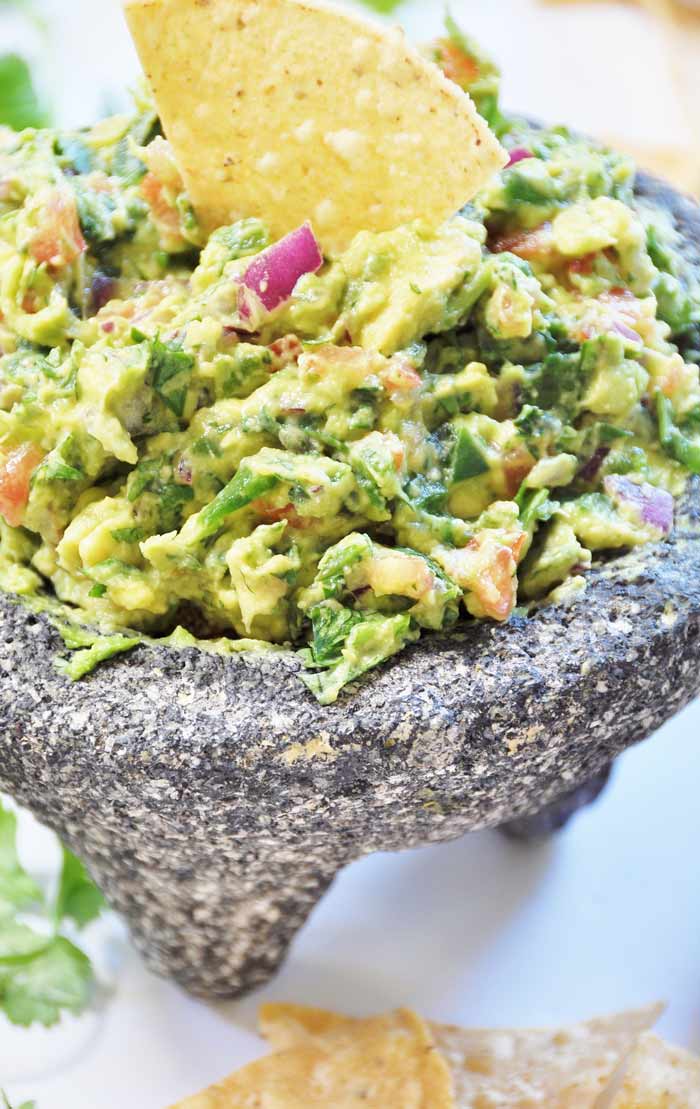 We went to my favorite Italian restaurant in T-town, DePalma's. They know how to make a good vegan pasta dish. I had spinach angel hair pasta with a fresh tomato marinara with mushrooms and a side of garlic spinach. It was so good! I couldn't get a good picture because it's so dark in the restaurant.

Sunday morning we finished the delicious muffins that we had on Saturday and headed back to Chicago. We stopped at Kona Grill just outside of Nashville and I had veggie sushi rolls. We didn't stop for dinner because we just wanted to get home, so I had more Twizzlers and my husband ate potato chips. We stopped at Starbucks for an almond milk latte and Justin's Dark Chocolate peanut butter cups.

Eating vegan on this trip was so much easier than last year. For one thing, I'm getting used to ordering and being able to pick out things on a menu that I wouldn't have thought of in years past. Another reason is that more and more restaurants are becoming veg friendly. When you put those two things together, it means that Linda won't starve.

I'm not going to share my activity this week because it's not really important to this post. I'll get back to that in two weeks. Have a wonderful weekend and make sure that you check out my Thanksgiving recipe post. Click here. It has lots of great ideas and recipes to help you with your holiday meal planning.

1shares
Healthy vegan recipes that will keep you strong, fit, and satisfied.