Marathon training has begun for my second marathon! This post summarized last year’s marathon, and so I thought I’d share it with you to kick off this training season. Who else is in training? 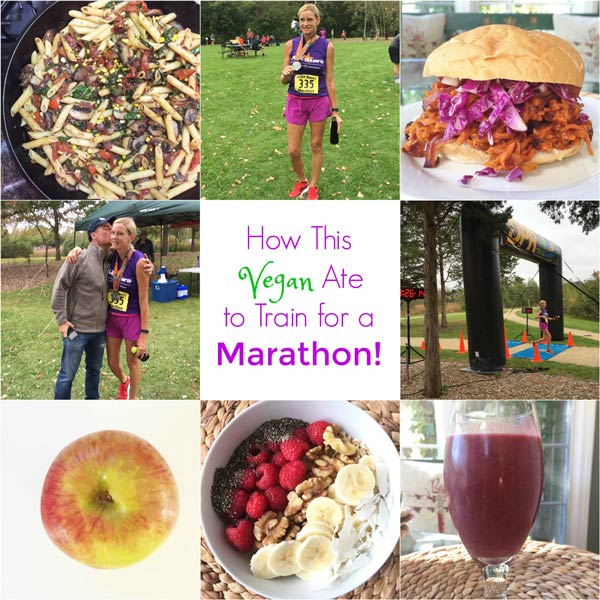 Four hours, twenty five minutes, and fifty seven seconds!!! That was how long it took me to complete my first marathon. The competitive part of my ego wanted to finish in four hours, but the rational and grateful side of me was thrilled with that time.

When I ran my first half-marathon, many years ago, it just about killed me. I went back and forth from the couch to the bathroom for the rest of the day. I clearly didn’t hydrate and fuel properly, I didn’t train like I should have, and my body rebelled. I swore after that half that I would NEVER run a full marathon. I wasn’t that stupid.

Fast forward about ten years, and here I am, almost three years into eating a whole foods plant-based vegan diet, and I just completed my first marathon, successfully and injury free. I owe a lot of that to my running coach, Susie, from Suzlyfe. She rocks! She customized a running plan for me that started in May and ended the day of the race. It was awesome, she is awesome, and I highly recommend hiring her if you’re interested in running any kind of race. Whether it’s your first 5K or a full marathon, she should be your coach. And did I mention that she’s affordable? She is, and I’m not getting paid to say that, I just believe in the woman!

Okay, back to the marathon. Like I said, I began my training in May, and the journey to race day was one of the most incredibly eye opening experiences that I’ve ever had, next to being married and having and raising my children. To say that I learned a lot about myself would be an understatement. I put in over eight hundred miles in five months, and all but twenty of those miles were with me, myself, and I. Running was like therapy. I highly recommend it. You’d be surprised at what you can figure out and come to terms with when you are forced to be alone with your thoughts while you’re exerting yourself. It’s also the best way to prove to yourself that you can do more than you ever thought you could.

Like I said, I told myself that I’d never run a marathon, and then I did, and it wasn’t bad. My body held up because I trained properly and I made sure to foam roll, stretch, and strength train. Each week that I ran made me feel stronger and look better. I’ve never been in better shape in all of my fifty-two years of being active. I’m also mentally stronger, and confident, and happier. Being physically fit will do that to you. It’s pretty amazing to think about what the mind and body can achieve when they work together.

So yes, I trained for this race for five months, and on Saturday I ran it. Here’s how it went.

I woke up at 5:45 am, had a few sips of coffee, ate bowl of oatmeal with a tiny bit of maple syrup and sliced banana, and drank a few glasses of water. I didn’t realize how nervous I was until I found myself in the bathroom for the third time in an hour. I actually started to panic a bit because I was beginning to think that I had a stomach bug. Thankfully, I didn’t, it was just nerves and all was good by the time I had to leave the house.

Alex and the hubby dropped me at the race location and then drove off to buy some ginger chews to hand off to me at mile ten. So sweet! The race was small, only 185 people were running the marathon. The ultra runners started at 7:00 am, we started at 8:00 am, and the half-marathon started at 9:00. I was going to start running in the second wave, but I was close to the front so I took off with the first. Unlike other races I’ve run, there was no slow starting because of crowds, we just took off at the pace we felt like running.

The trails were so gorgeous and peaceful. Fall is in all of its glory in the Chicago area and the colors were spectacular. The temperature was perfect too. It was cloudy and in the high 50s when we started and I think it was like 60° when I finished. I was so happy that i decided to wear shorts instead of running tights. I never got too hot or too cold, my body temperature stayed just right.

Silence was the word of the day. Because their were few people running the race, and it was in a forest preserve, there were few spectators. There were times when I didn’t see another runner for ten to fifteen minutes. It was weird, and it forced me to be mentally tough during the last ten miles. Whenever I felt like walking I’d think of my dad, and all that he went through during the ten years that he suffered from Alzheimer’s. I told myself that if he could endure the pain of that, I could certainly run a few more miles.

I kept waiting to hit that proverbial wall after mile eighteen. So many people told me that they, or their loved ones, hit the wall at mile nineteen, twenty, twenty-one, and so on. I don’t know if I willed myself to not hit it, or if the conditions and my fueling strategy was just spot on that day, but I was grateful that I didn’t hit it. Seeing Alex and Greg at so many different points on the trail gave me energy to keep going. I could see the pride in their faces, and their smiles ignited my determination to keep going. Another pretty amazing thing that happened was when I saw my old running buddy, the woman who got me to start running ten years ago, and the one who I ran all of those half-marathons with.

It was difficult for spectators to know where and when to see their friends and family because it was in a forest preserve, not on city streets. I had just finished running over a bridge that my BFF and I had run over numerous times when we ran together, and I was thinking about how much I missed running with her. She hurt her hip and doesn’t run long distances anymore. Anyway, I turned a corner on the path and there she was! I couldn’t believe it. We both agreed that God had purposefully put her there at that moment. It was right around mile twenty-three and I was feeling like I might get a cramp in my right calf. She started running with me and we ran together for about a quarter of a mile, all the while she talked, I listened, and then she had to say goodbye, but not until she reminded me that I only had a few more miles, and that I could do it! Seeing her was exactly what I needed to find the energy to keep running those last miles.

The hardest part of the race was the last mile. It seemed like it lasted forever. It’s always like that it seems. A few people were lined up along the edge of the trail and they kept saying, “You’re almost there!” I wanted to scream, “That’s what she said!” Because, honestly, that’s what people kept telling me and it didn’t seem like I’d ever see the finish! And then I did.

I picked up my speed and powered through those arches like a boss, and I was so happy to be done. My friend, Lynette was there, along with Alex and Greg, and Hooper, to see me finish. I was so happy to see their faces, but I couldn’t stop to talk. My legs immediately started to tighten so I had to keep walking. After about five minutes of pacing I felt good enough to pose for a few pictures and drink the pickle juice that Alex brought me from home. They also brought me flowers, potato chips, and mimosas. I couldn’t even think about drinking one for at least an hour after I got home, but how sweet was that?

After foam rolling, stretching, and a hot shower, I put on my recovery socks, sat on the couch with my legs up, turned on the Iowa Hawkeyes game, and had some champs and a bowl of potato chips, and that’s where I stayed for the rest of the day. Lucky me, the marathon was on Saturday so I could sit and watch college football all afternoon without a twinge of guilt. Roll Tide!

When I looked up my results on the marathon’s website I was shocked to see that I placed third in my age division, and I finished 58 out of 185 runners. I was also surprised at how quickly my body recovered. I had sore feet and hip flexors on Sunday, but by Monday I didn’t have any soreness at all. I felt completely back to normal. I couldn’t wait to get back in my running shoes, but I stayed smart and decided to just walk the dogs, play doubles tennis on Wednesday, and start running on Thursday. It felt so good to get back out there.

At the moment I’m trying to decide which marathon I want to run in the spring. What do you think? Let me know if you have any spring marathon favorites that I should consider.

What I Ate the Day Before a Marathon

I drank a glass of lemon water, a cup of coffee with almond milk, and a bowl of oatmeal with sliced bananas, raspberries, chia seeds, walnuts, and coconut flakes. 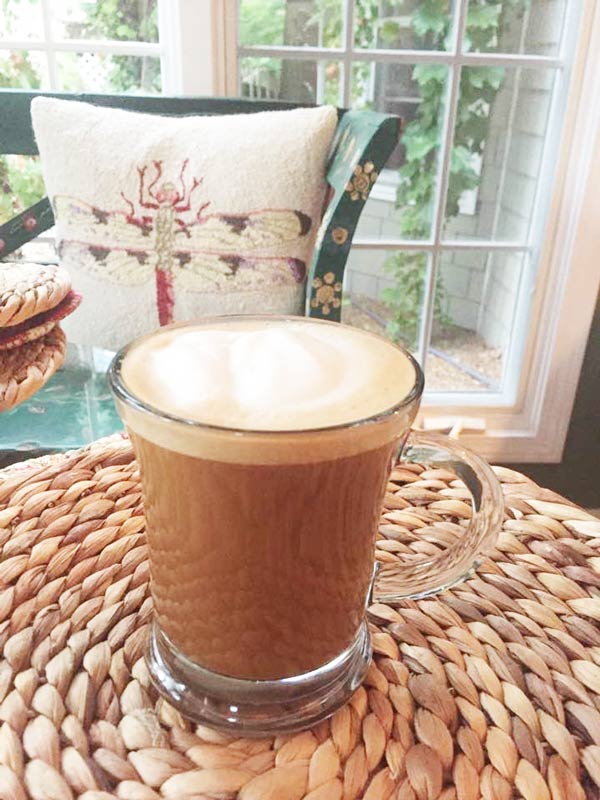 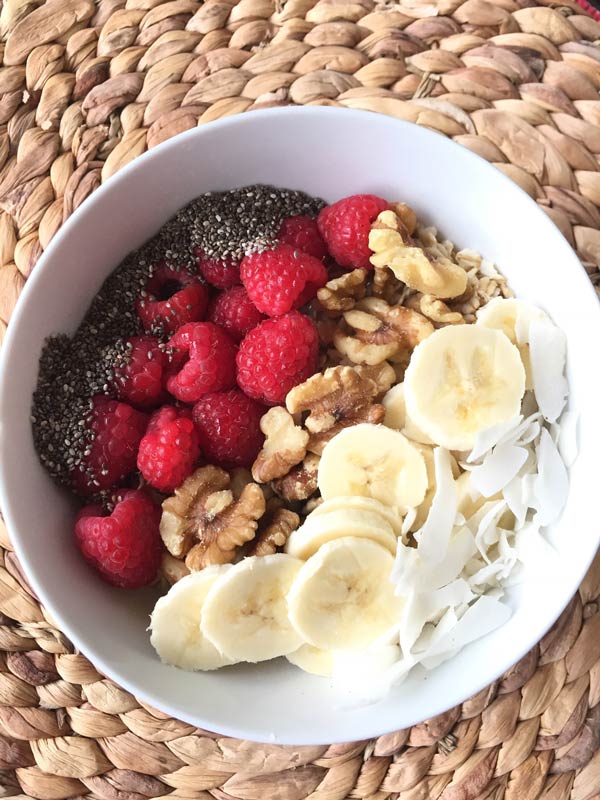 I ate a banana and an apple. 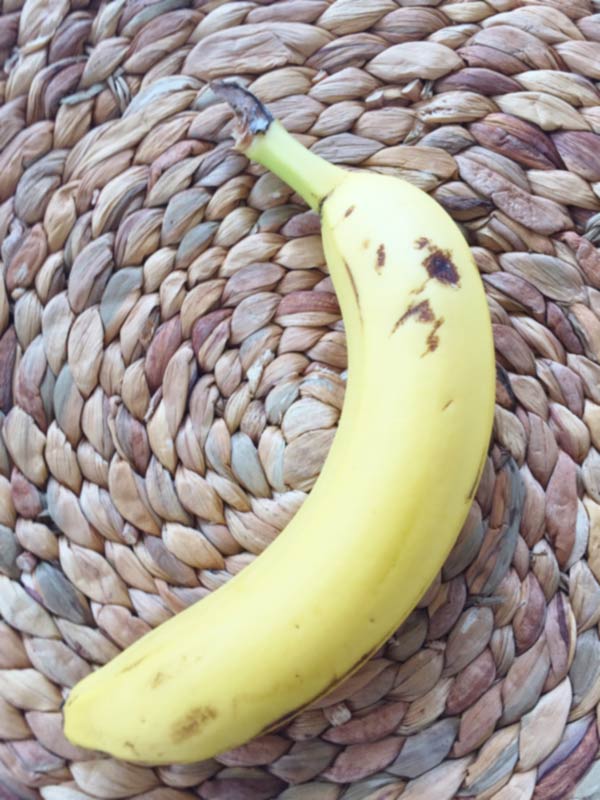 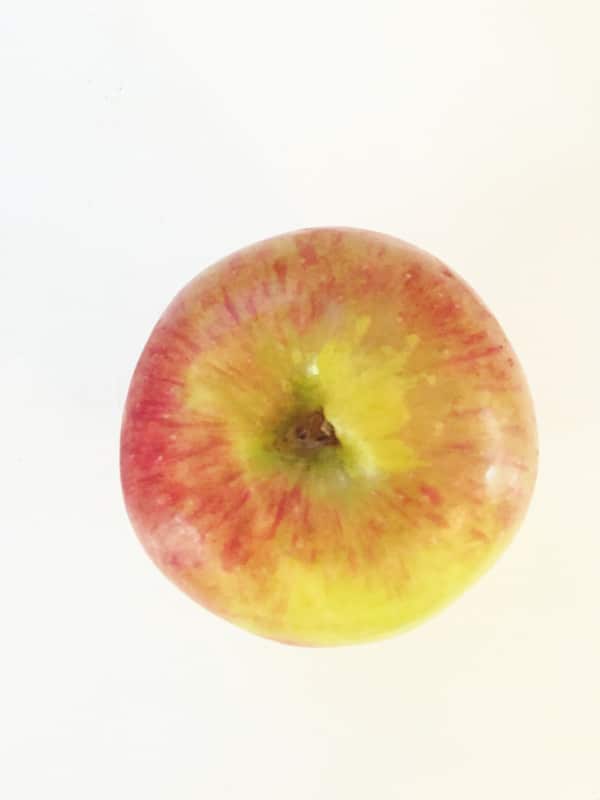 I had a bowl of Jasmine rice with spinach and soy sauce, and a small bowl of dark chocolate covered almonds for dessert. 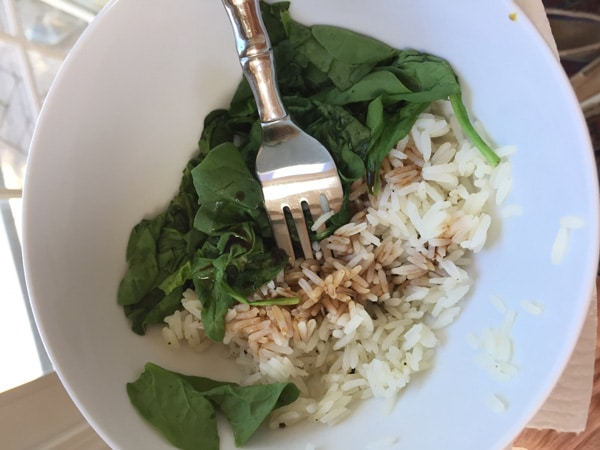 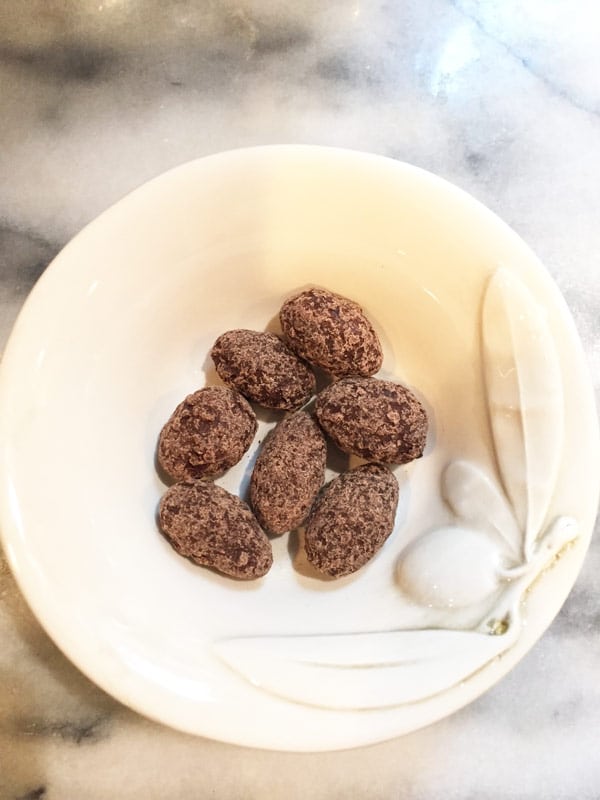 I had two Wasa whole grain crackers with smashed avocado, salt, and pepper 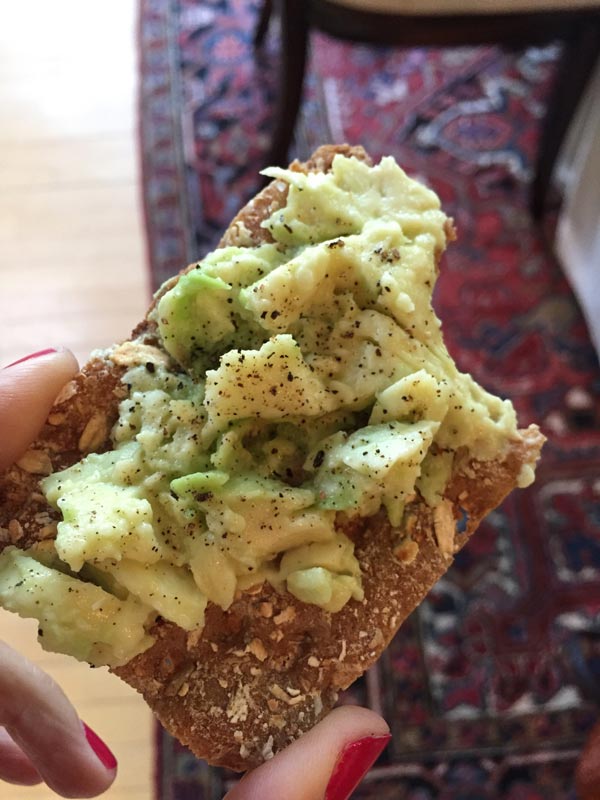 We ordered Thai food, because that’s what I was craving. And, because I was getting nervous, and I was hungry, and Alex was home and the dogs were excited, I forgot to take a picture of

« Vegan Pumpkin Sage Risotto
What This Vegan Ate to Train for a Marathon – Race Completed! »

0shares
Healthy vegan recipes that will keep you strong, fit, and satisfied.