If you’re looking for a hearty vegan meal that will satisfy all of your flavor cravings, such as sweet, salty, spicy, and umami, these meaty roasted cauliflower steaks with spicy quinoa will do the trick. 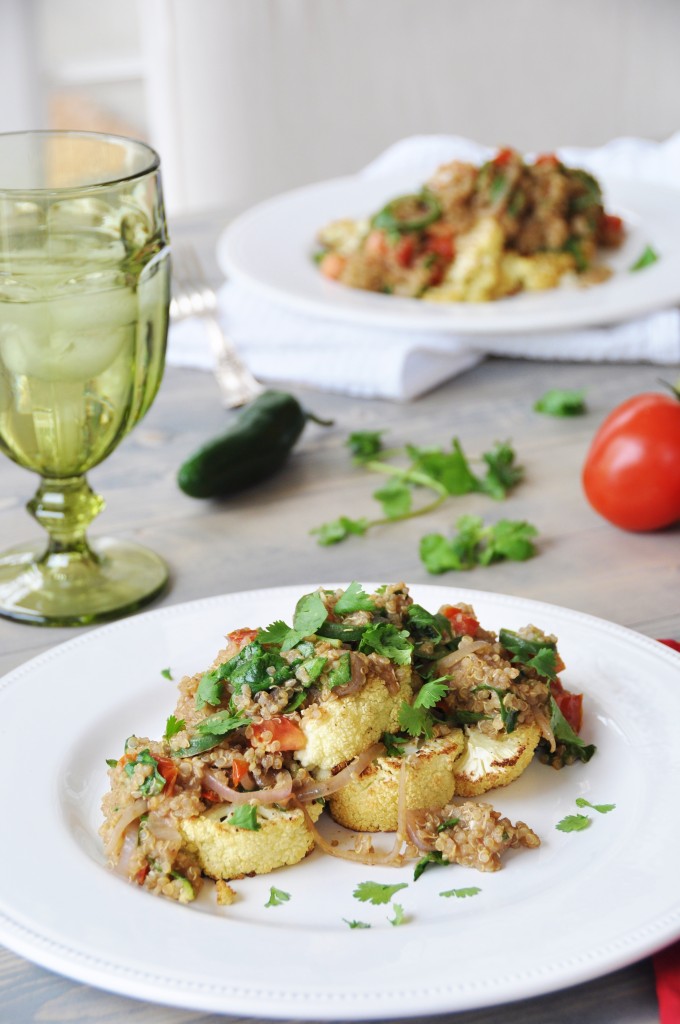 As I was putting together the 50 Vegan Cauliflower Recipes post from last week I was particularly impressed with the Cauliflower Steaks with Mushroom Gravy recipe by Love and Lentils. I’m in lust (can you really be in love with a mushroom?) with mushrooms, so Sophia’s picture of rich brown shrooms and gravy smothering that perfectly roasted cauliflower steak spoke to me. It said, you know you want me, you want me so bad. And I did. So. Bad.

At the same time, there was another enticing recipe pulling me in another direction. Alex’s Thai cauliflower bowl. She told me about it a few days ago and it’s been on my mind. I mean, coconut milk, cauliflower, Chinese five spice, curry, and cumin, how could I not want that in my stomach?

Because I’m nothing if not a collaborator, I decided to quench both of my cravings at one time. I roasted some thick, meaty, perfectly delicious cauliflower steaks, and then I smothered them with spicy quinoa. Bravo. Slow clap gets faster and louder with each amazing bite. 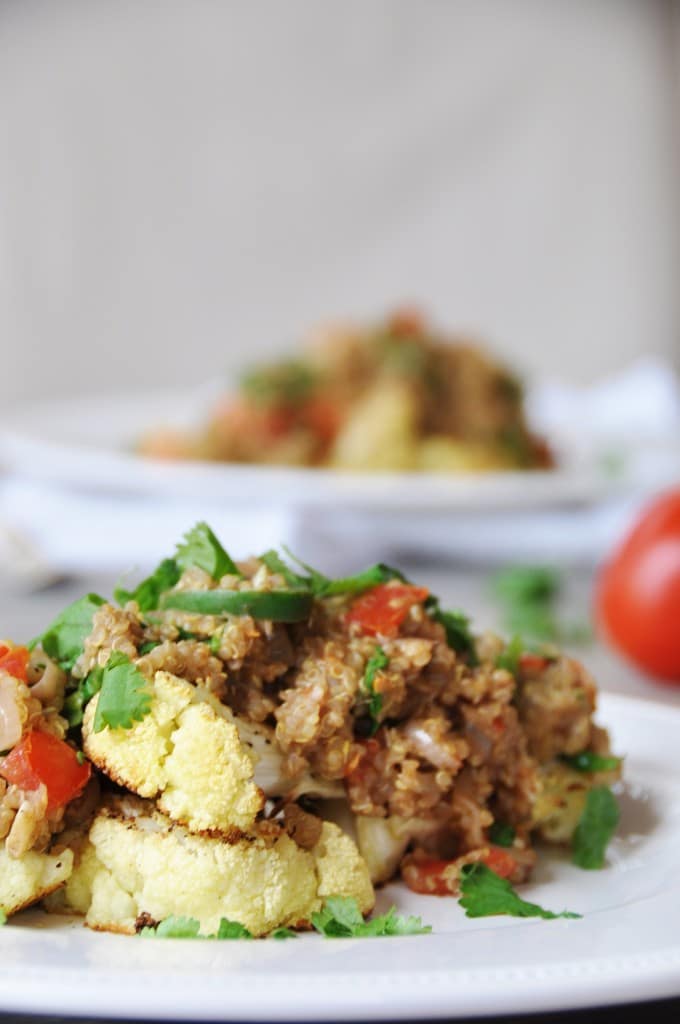 Yes, I’m tooting my own horn. HONK!!! But only because my husband gave this two thumbs up and a lot of mmm, this is really good praises. He even had seconds, and why not? It’s healthy, and full of protein (thank you quinoa).

So let’s get down to the nitty gritty of this awesomely easy dish. First, roast your cauliflower steaks. Peel off the leaves at the stem, but don’t cut out the stem, you’ll need it to keep the steaks intact.  Cut ¾ inch pieces of cauliflower. I found that ½ inch was too thin and 1 inch was too thick. Brush olive oil over the surface of both sides of the steaks and salt and pepper to taste. Then roast the steaks for approximately 10 minutes on each side. You don’t want them to blacken, they should be easy to pierce and nicely browned around the edges.

While the cauliflower is roasting, cook the quinoa and the shallots, jalapeno, ginger, garlic, tomatoes, spinach, coconut milk and spices. If you want a turbo charged heat you can slice the jalapeno with the seeds. If you’re looking for a light heat then cut the seeds out of the pepper.

When the quinoa is ready add it to the coconut milk mixture and stir well so that it absorbs the milk. Top the steaks with the quinoa and sprinkle some fresh cilantro on top and dig in. 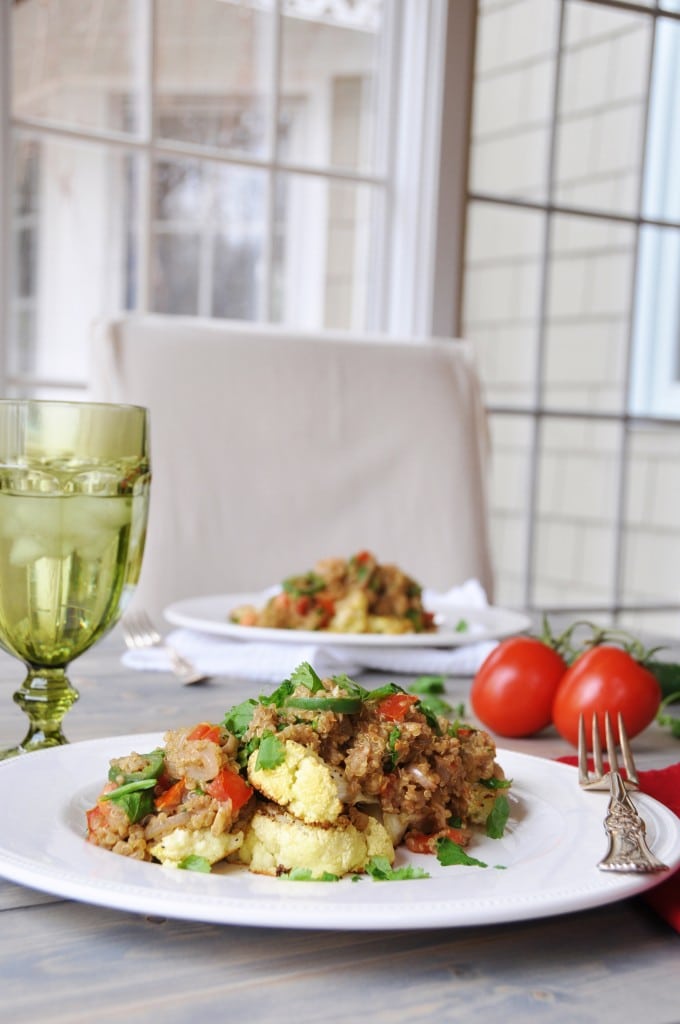 The flavors in these roasted cauliflower steaks with spicy quinoa are magic. You get a sweet flavor from the coconut milk, a spicy bite from the jalapeno, savory from the curry and cumin, and if you choose to drizzle a little soy sauce over it you’ll get a nice umami flavor as well. To finish this tasteful symphony, the cauliflower adds the salty element.

This is a great meal to serve an omnivore who doesn’t believe that a vegetable dinner can be hearty and satisfying. The protein in the quinoa will fill you up, and the cauliflower is so meaty and chewy, it’s truly a perfect entrée.

If you make this I’d be so happy to hear from you. I want to know if you enjoyed it as much as my husband and I did. Your comments help make me better. 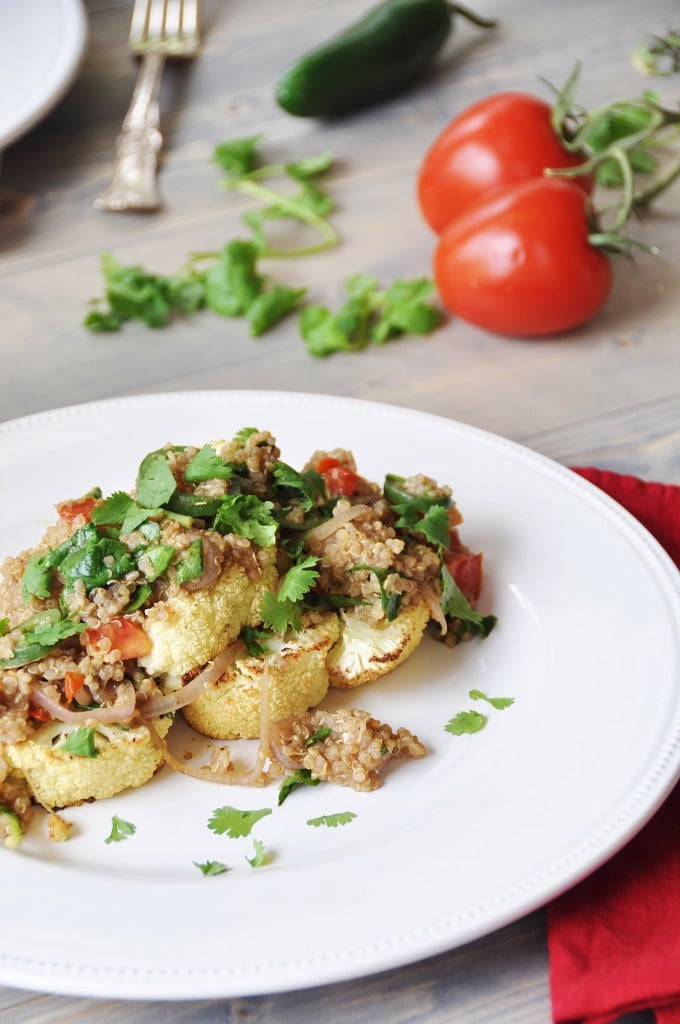 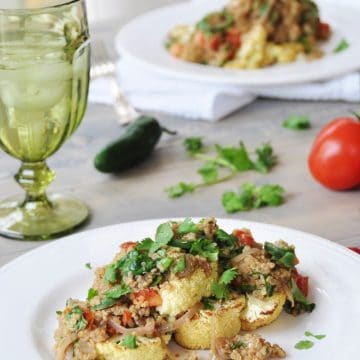 If you’re looking for a hearty meal that will satisfy all of your flavor cravings, such as sweet, salty, spicy, and umami, these meaty cauliflower steaks with spicy quinoa will do the trick.
No ratings yet
Print Pin Rate
Course: Entree
Cuisine: American
Prep Time: 15 minutes
Cook Time: 20 minutes
Total Time: 35 minutes
Servings: 3
Calories:
Author: Linda and Alex at Veganosity 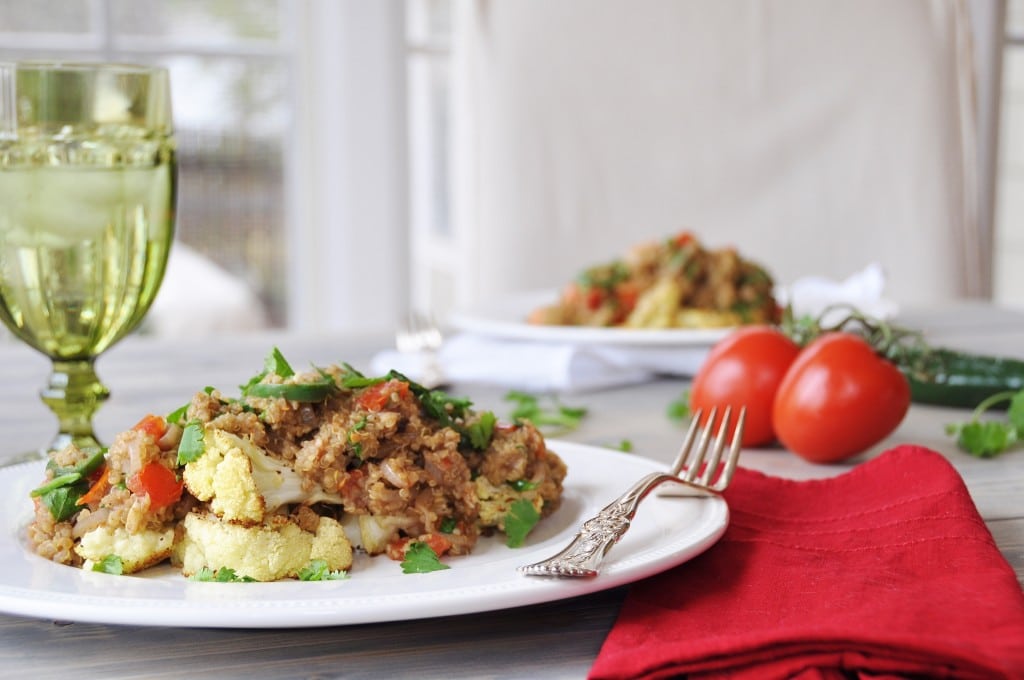