This pumpkin bread recipe has been waiting to make its debut since last February,  In the darkest days of winter, I found myself craving something warm, comforting, and full of  pumpkin.

Unfortunately, people had moved on from pumpkin, as Thanksgiving was long gone. However, I still had a few cans of pureed pumpkin left over from fall, so into the kitchen I went to make something delicious.

Instead of making a traditional pumpkin dish, I decided to make a loaf of bread. I mean, is there anything more cozy and comforting than the aroma of baking bread?

The recipe was inspired by garlic bread knots that I made the week before. I had some active dry yeast left over from the knots, so it seemed only natural to use it up and make a sweet rising bread.

I took my classic bread recipe and added pumpkin and chocolate-chips. I also made it look really pretty. Instead of putting the dough into a typical bread pan, I rolled three pieces into ropes and twisted them together. It was so easy and the results were fabulous. 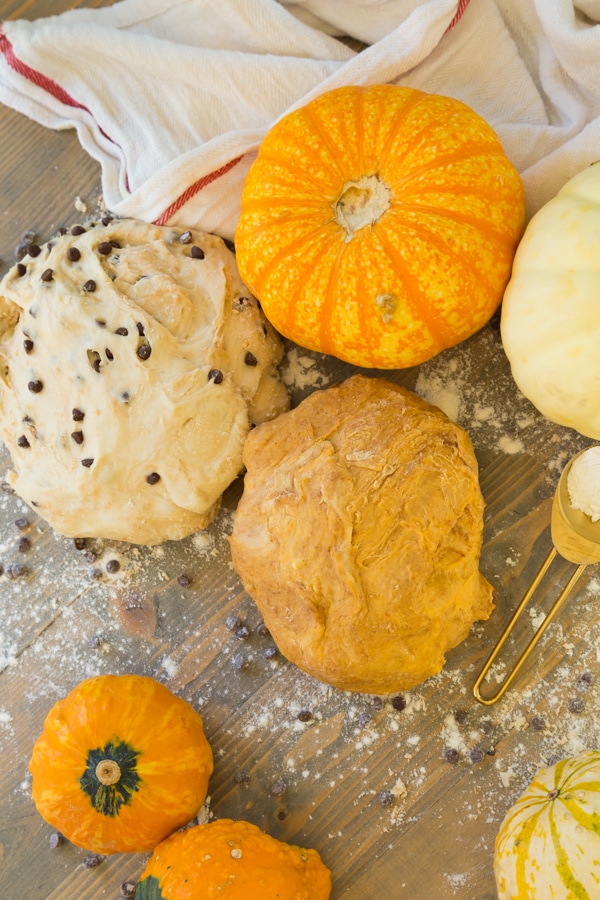 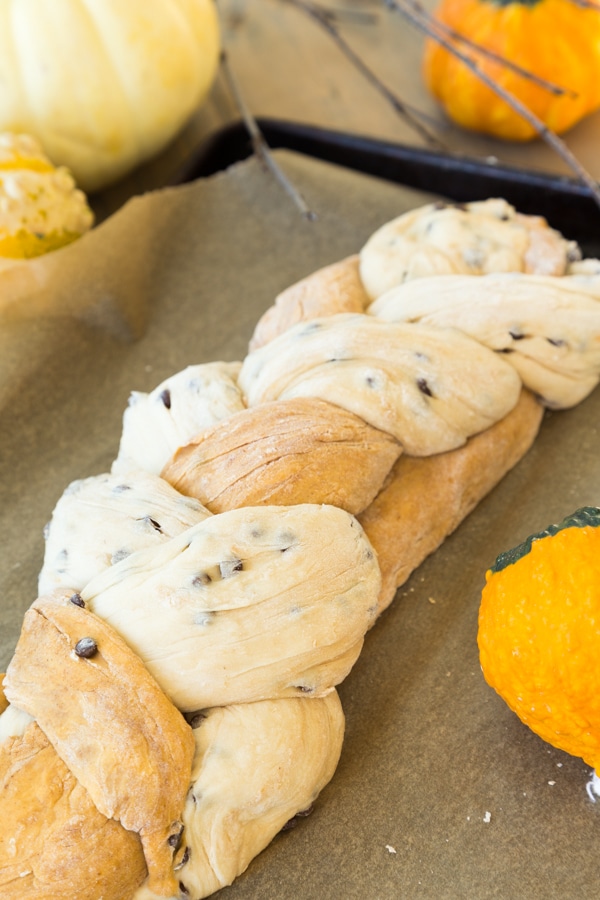 The flour you choose for baking cakes, cookies, and bread will make a difference in the end result. For this recipe, I chose bread flour.

I could have used all-purpose flour, but I wanted something that would rise well and yield a strong dough for kneading and twisting. It also produces a nice chew, which is what you're looking for in a good bread. Read more about different types of flour, here. 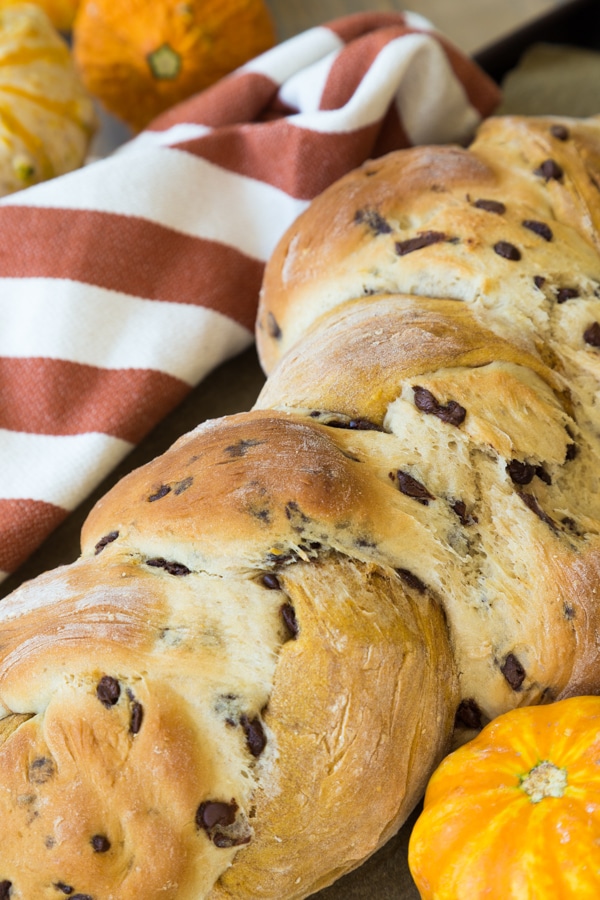 Why is Yeast Important to Make Bread?

Active Dry Yeast is the ingredient that makes the bread rise. Is it absolutely necessary to bloom or proof yeast before making your dough? Not necessarily according to this article. But, I always proof my yeast to make sure it is still alive. If after ten to fifteen minutes your yeast hasn’t begun to bubble, it means that your yeast is dead and you need to start over. A dead yeast will not help your bread rise at all.

Considering you have your two most important pieces of information stored away now, you can begin making your bread. Make sure to follow the directions and critically consider the texture of your dough. If your dough doesn’t look like ours does in the photos, feel free to continue to add flour at 1 tablespoon increments until it matches. If the dough is too wet it won’t bake correctly.

HOW TO MAKE HOMEMADE RISING PUMPKIN BREAD WITH YEAST

Proof the yeast. That means that you combine the yeast, 1 tablespoon (15 g) sugar, and the warm water in a small bowl and let it sit until it bubbles. This takes about 10 minutes.

In a large mixing bowl, slowly add the flour to the sugar and whisk it together until fully combined. By adding the flour a half of a cup at a time you'll ensure that it's fully combined with the sugar.

Make a well in the center of the flour and add the yeast mixture. Stir until it turns into a sticky dough. Now, put one third of the dough in a separate bowl and add the pumpkin puree, salt, and pumpkin pie spice and stir well to combine.

On a smooth floured surface, knead the pumpkin dough until you can form it into a firm ball. Add a small amount of flour if it's too sticky. Kneading the dough will firm it up, so don't add too much flour, just keep kneading it. Repeat with the vanilla-chocolate chip dough.

Form the two balls of dough into balls and place in a lightly greased bowl and cover with a towel. Let them sit in a warm spot for forty minutes. The dough should double in size.

Lightly grease a baking sheet and then punch the dough down and knead for 3 minutes. Divide the chocolate chip dough into two pieces and roll into 16 to 18 inch ropes. Repeat with the pumpkin dough.

Now, place the ropes side by side, with the pumpkin in the center and braid them into one loaf. Place on the greased baking sheet, cover with a towel, and let rise for another 40 minutes.

Bake ion the center rack in a 350 degree oven for approximately 40 minutes, or until the bread is a light golden brown.

What to Do with Leftover Dough

This makes a large loaf of bread, and we never finish the whole loaf. Could we make a smaller loaf? Of course, but there's a method to our madness. 😉

After creating this labor of love, you don't want to just let it go to waste! Just because bread is stale, doesn't mean it's not usable. For old bread, there are a couple of go-to recipes we love to implement. Use the basics of our Vegan Eggnog French Toast recipe to make a scrumptious pumpkin bread french toast. Just replace the eggnog with almond milk! Or how about creating a pumpkin vanilla chocolate chip bread pudding? Just check back with us in a week or so for that incredible recipe! 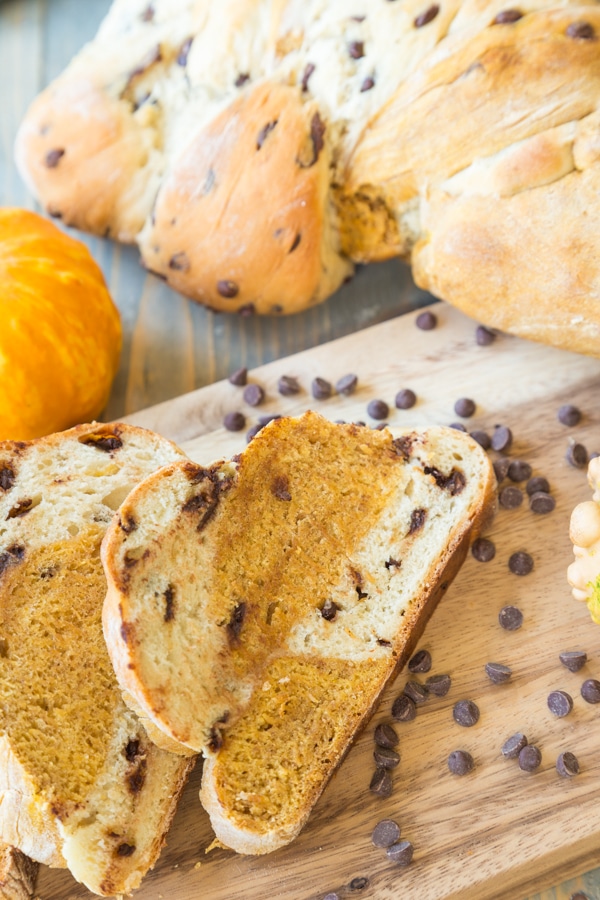 Hopefully now you have the confidence to go out and make this impressive loaf of bread. What is your favorite Fall recipe to make? Is there anything that’s really special and only gets brought out a couple times a year? 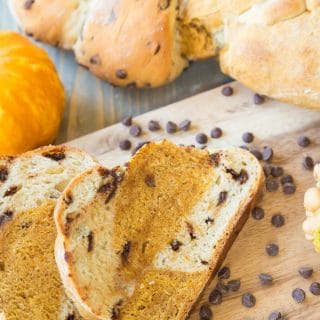