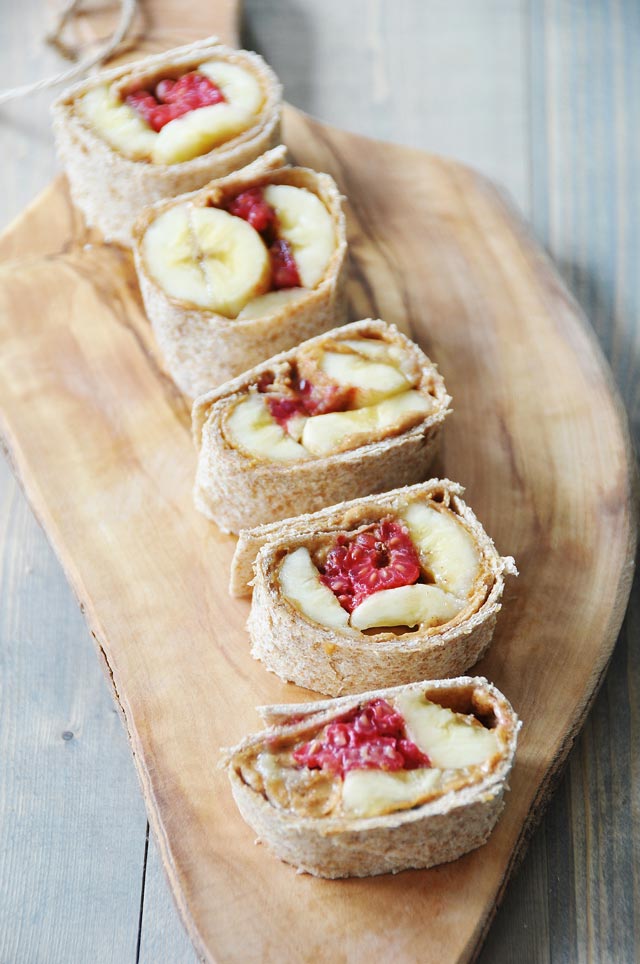 Parents across the country are preparing to get back into a routine, and it can be overwhelming just thinking about it, much less actually doing. They’re trying to get the kids back on a school day sleep schedule, they need to make sure that there are clean clothes ready for the next day, they have to buy school supplies, books, and all of the other stuff that comes with going back to school. Are you one of those people? I’m sorry that I can’t help you with those things, but I can help you pack a healthy, colorful, and tasty lunch that your kids will like. Maybe something like these peanut butter, raspberry, and banana spirals, or a Jamaican jerk tofu wrap with a side of SuperEats Kale crisps?

Peanut butter and jelly sandwiches are the staple of school lunches, but they’re also so predictable. And the jelly, jam, preserves, or whatever you spread on the peanut butter is usually a sugar bomb. You don’t want to feed your kids something that will amp them up for a half an hour and then make them crash and burn, especially when their little brains are learning important things like math, science, and how to read and write. That’s why these spirals are the perfect alternative; they won’t cause a sugar crash, they’re fun to look at, and they taste great. 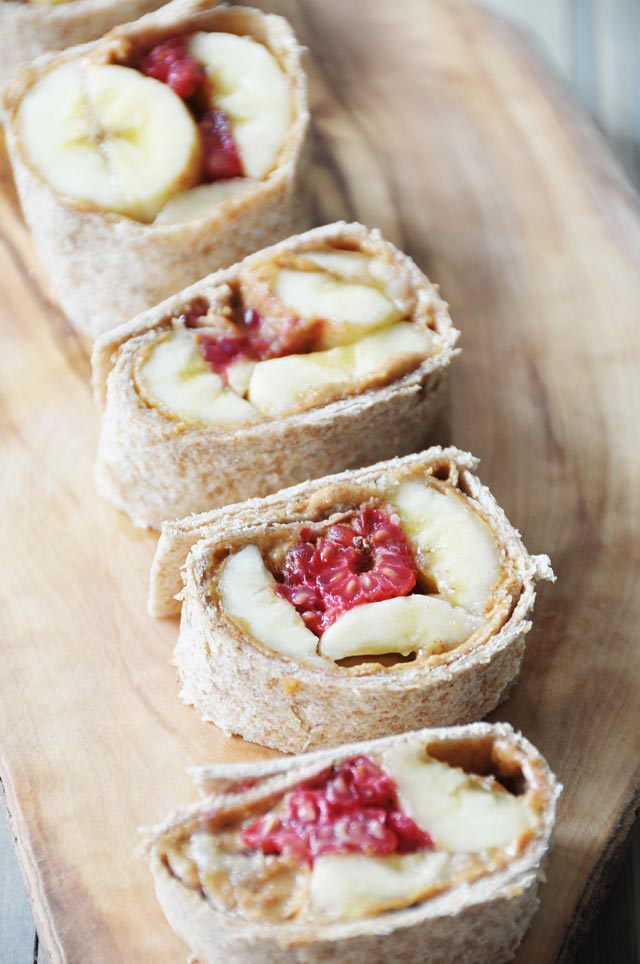 This “recipe,” if you can call it that—it’s actually more of an idea—is easy for you to make and pack, and your kids will love you for sending them off to school with a lunch that looks as good as it tastes. All you’ll need to whip this together is a whole grain tortilla or vegan wrap, some peanut butter (if your kid’s school doesn’t allow peanut butter you could use any other nut butter), fresh raspberries (or strawberries or blueberries), a banana, and a sprinkle of cinnamon.

Spread the peanut butter on the inside of the wrap, leaving a one inch border, and then add the berries, banana, and cinnamon. Roll it up tight and cut it into two inch pieces. That’s it. You can close it up tight in an airtight container or roll it in parchment paper. Serve it with some baby carrots, a bag of SuperEats kale crisps, and a handful of vegan chocolate chips if your kids demand something sweet to finish their lunch. 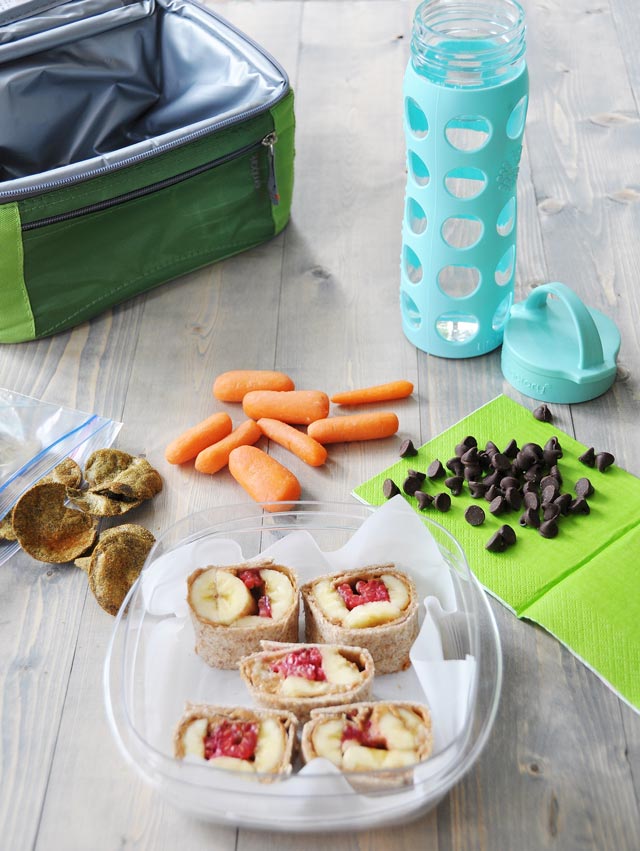 Have you tried SuperEats Kale + Chia Chips? If you have, then you know that they’re really good. They’re like corn chips, but so much better. I’m so excited to announce that they’ve just launched their newest healthy snack, Kale Crisps, Get excited potato chip lovers! 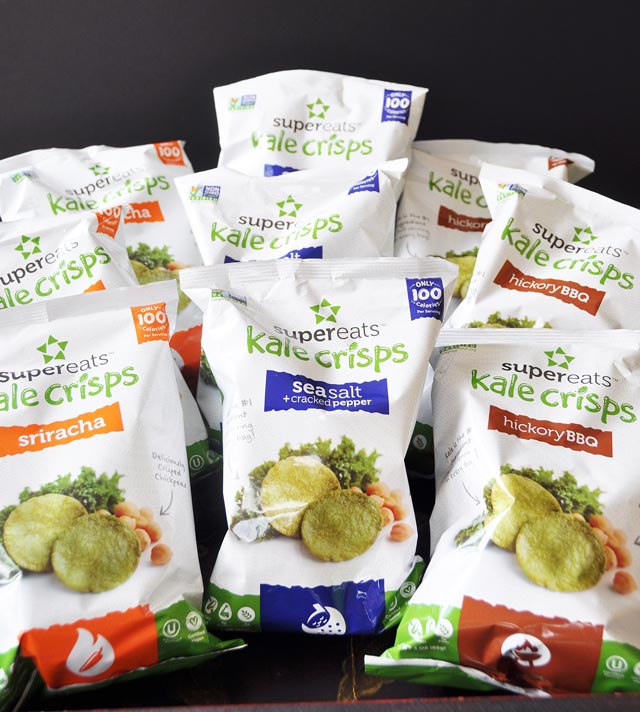 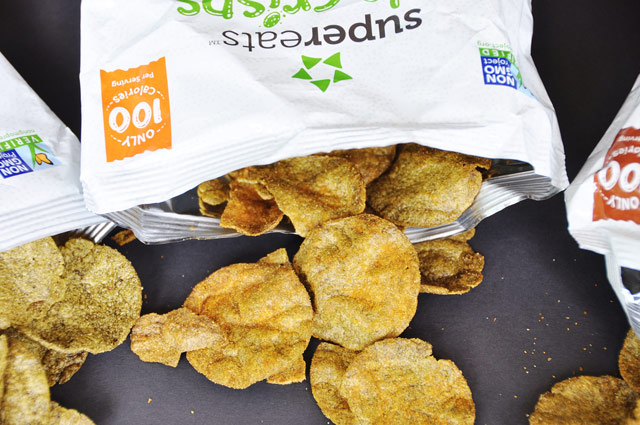 Kale Crisps are the perfect alternative to potato chips, because they’re so much healthier. They’re cooked, not fried, and they’re made with mostly kale and some chickpeas and lentils for added protein. All of the ingredients are natural, non-GMO, gluten free, kosher, and vegan, and they come in hickory BBQ, sea salt + cracked pepper, and sriracha. Each one is as flavorful and crunchy as the next. 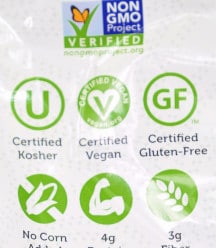 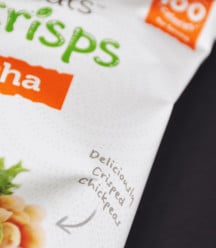 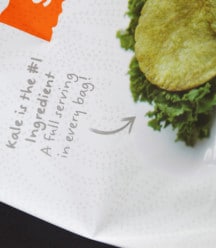 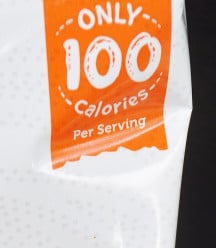 I asked my tennis friends to try the hickory BBQ and the sriracha; they really liked them. They’re full of flavor—the sriracha is noticeable but not over powering—and they’re really crunchy. You can taste the kale, but not enough to scare green vegetable haters away. In fact, these are so much like potato chips that I think that people who won’t eat green food will change their ways after eating these.

My husband and I saved the sea salt + cracked pepper crisps for ourselves. They weren’t too salty and there was a tiny bite of black pepper. We were impressed, and finished off the entire bag in one sitting. My husband is a potato chip lover, so he couldn’t bring himself to say that they were better than his beloved (and incredibly unhealthy) chips, but he did say that he’d be happy to alternate between the two. Progress! 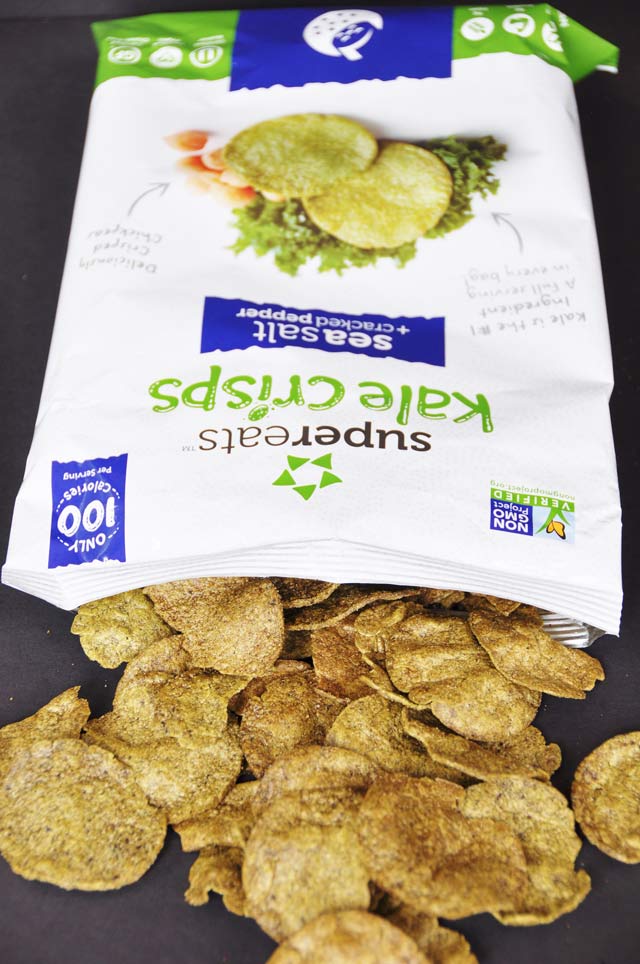 If you’re the kind of parent who refuses to pack potato chips or corn chips in your kids’ school lunch box, then these are for you. Your kiddos will love opening up a crunchy snack at lunch time and you’ll love feeding them a chip that actually has protein, fiber, and vitamins.

A representative from SuperEats contacted me and asked me if I’d review their Kale Crisps and host a giveaway, of course I was happy to oblige. Because I was anxious to try out the new product, and give three lucky readers a chance to try them too. Enter the raffle below for a chance to win a bag of the hickory BBQ, sriracha, and sea salt + cracked pepper!

I was not compensated for this review. I received the product to taste test and enough to give out in the giveaway. All opinions are mine.

Do you pack your kids’ lunch or buy it from the school?

Can you send peanut butter to school or is it banned?

I love these lunch bags. Click on the pictures to check them out and order them.

Veganosity is a participant in the Amazon Services LLC Associates Program, an affiliate advertising program designed to provide a means for sites to earn advertising fees by advertising and linking to amazon.com. We make a small commission when you order from Amazon. It helps us afford the groceries to develop all of our recipes, and to pay for the maintenance of our site. We thank you in advance for your consideration.

Take peanut butter and jelly to new heights with this healthier and prettier version. Perfect for school lunches.

Healthy vegan recipes that will keep you strong, fit, and satisfied.
66shares