This easy Panzanella salad is made with 8 simple ingredients and can be eaten as a side or as a meal. Crumble some vegan cheese on top to make it extra special. 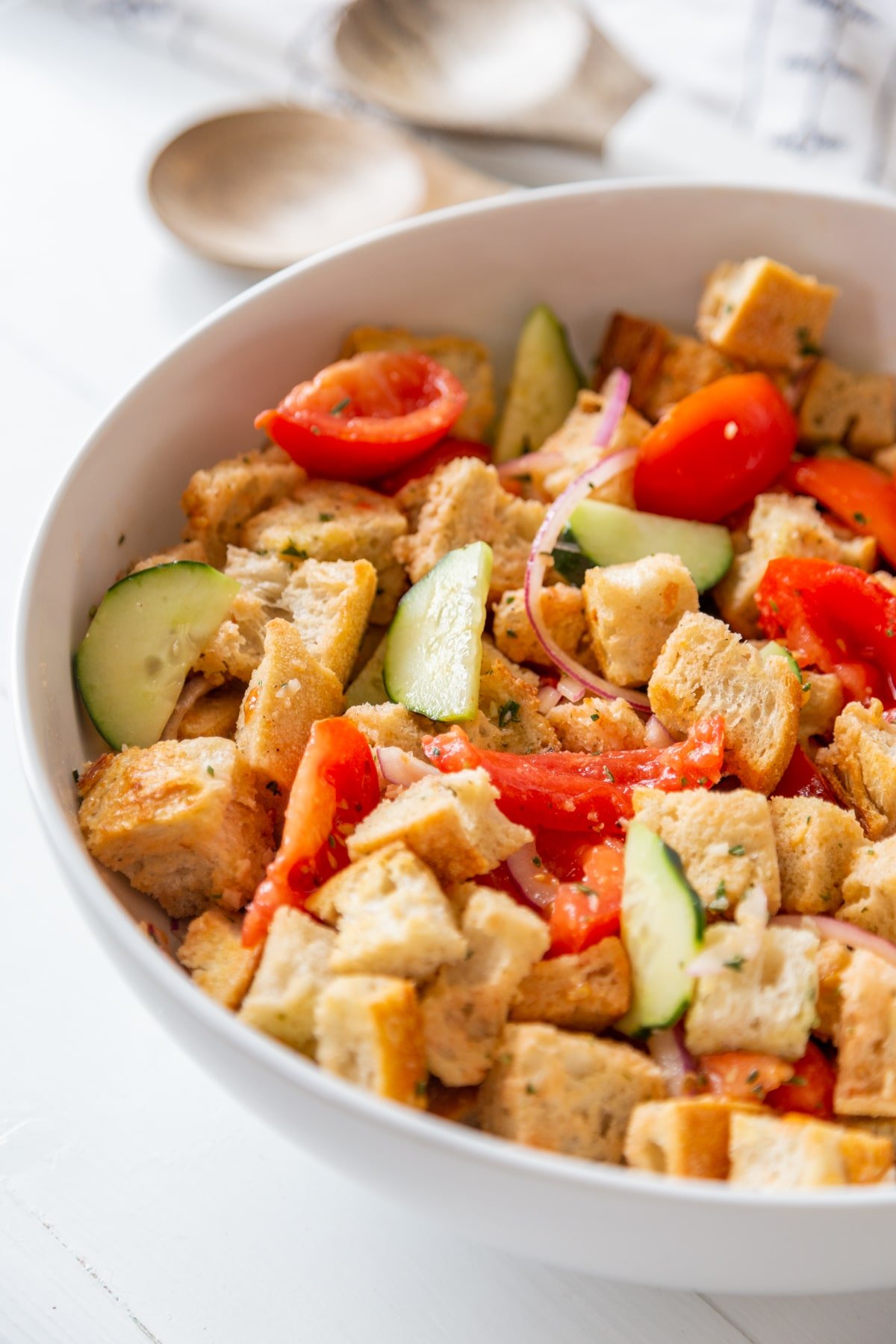 A few years ago, my husband and I had the good fortune of spending time in a private villa in Tuscany with 8 of our closest friends.

The villa was incredibly beautiful, and the setting was stunning. We had views of olive groves and vineyards, a pool, and a private chef.

Our chef made us a classic Italian Panzanella for dinner and it was unlike anything I’ve ever had.

The bread was soaked in water, so it softened and then the water was squeezed out. She (the chef) then added some olive oil, vinegar, salt, and tomatoes.

The salad was simple and so delicious, although the texture was rather soft.

American Panzanella is made with croutons that are softened in an oil and vinegar dressing, and often times has cucumber and red onion in addition to the tomatoes.

While both are delicious, I prefer the American version because of the added texture. 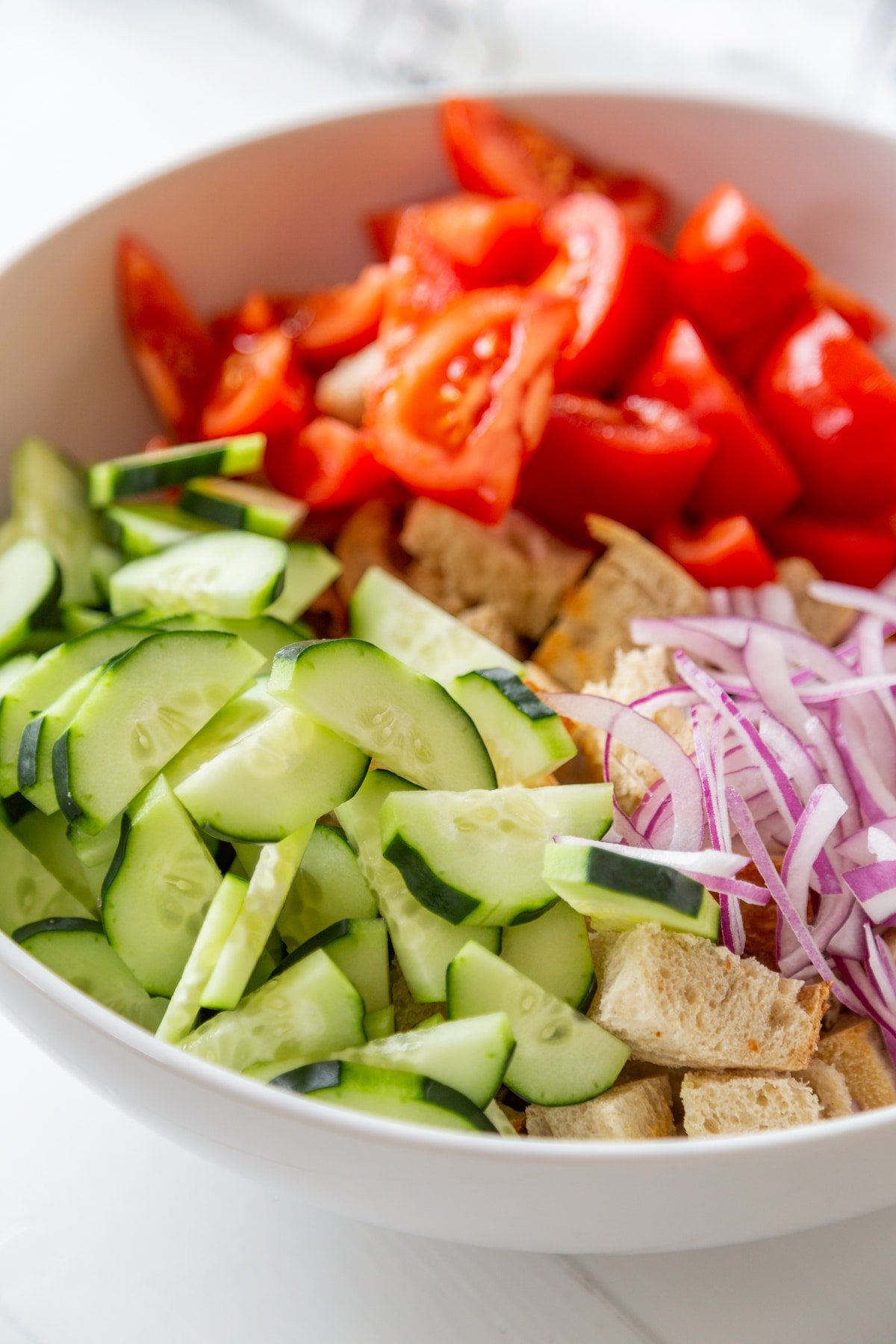 How to Make Panzanella Salad

This summertime salad is so incredibly easy to make and it’s a great way to use up stale bread.

For this bread and tomato salad, it’s best to start with stale bread.

We suggest using a French baguette, Italian bread, or sourdough.

It has less moisture than fresh bread, and even though we cube the bread and bake it to make croutons, there’s something different about starting with one- or two-day old bread that makes it better.

Cut the bread into cubes. You decide how large you want them to be.

Toss them with good olive oil and salt and pepper, then bake them until they’re lightly golden and the edges are crispy. 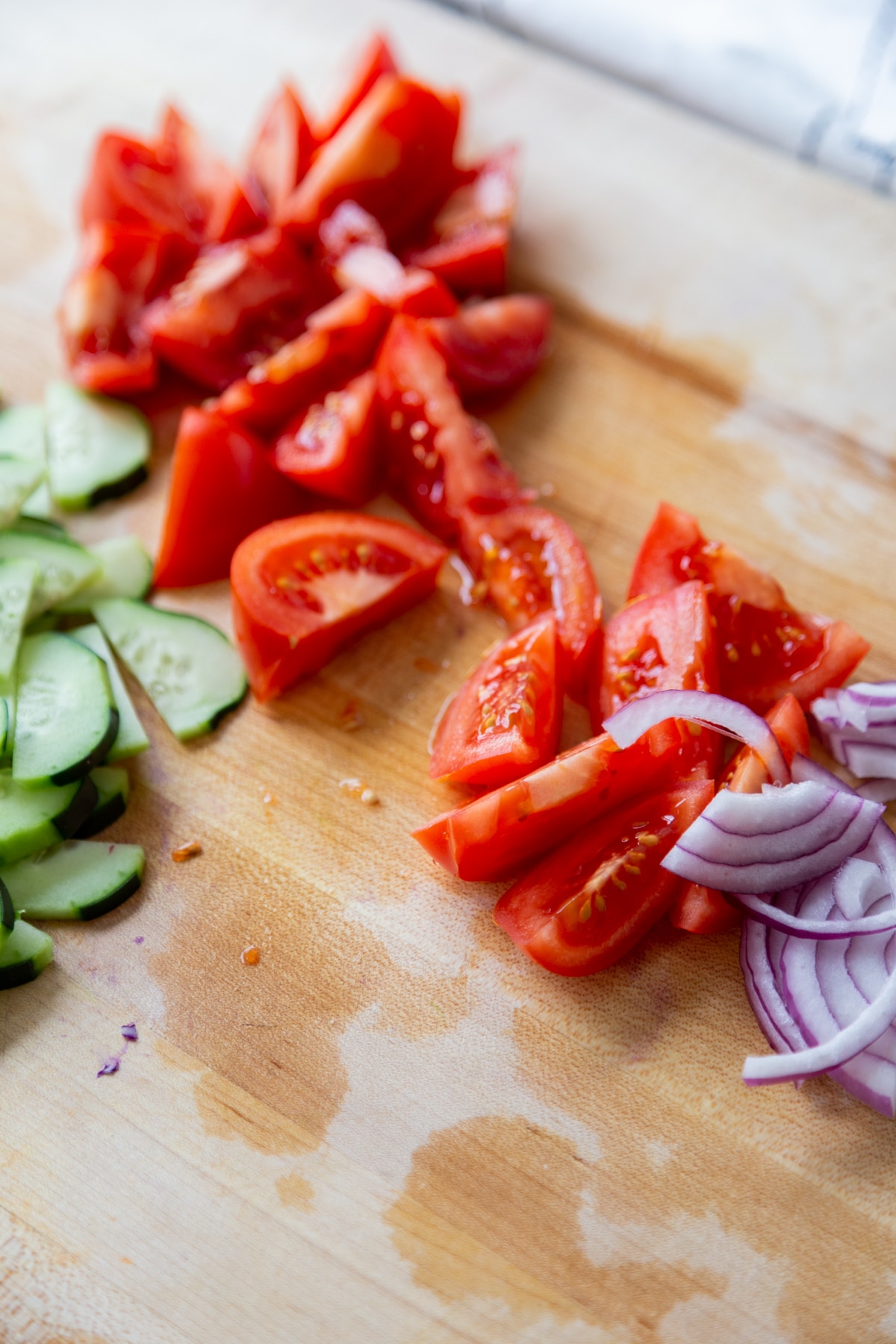 Slice or dice the cucumber and tomatoes and slice the red onion. 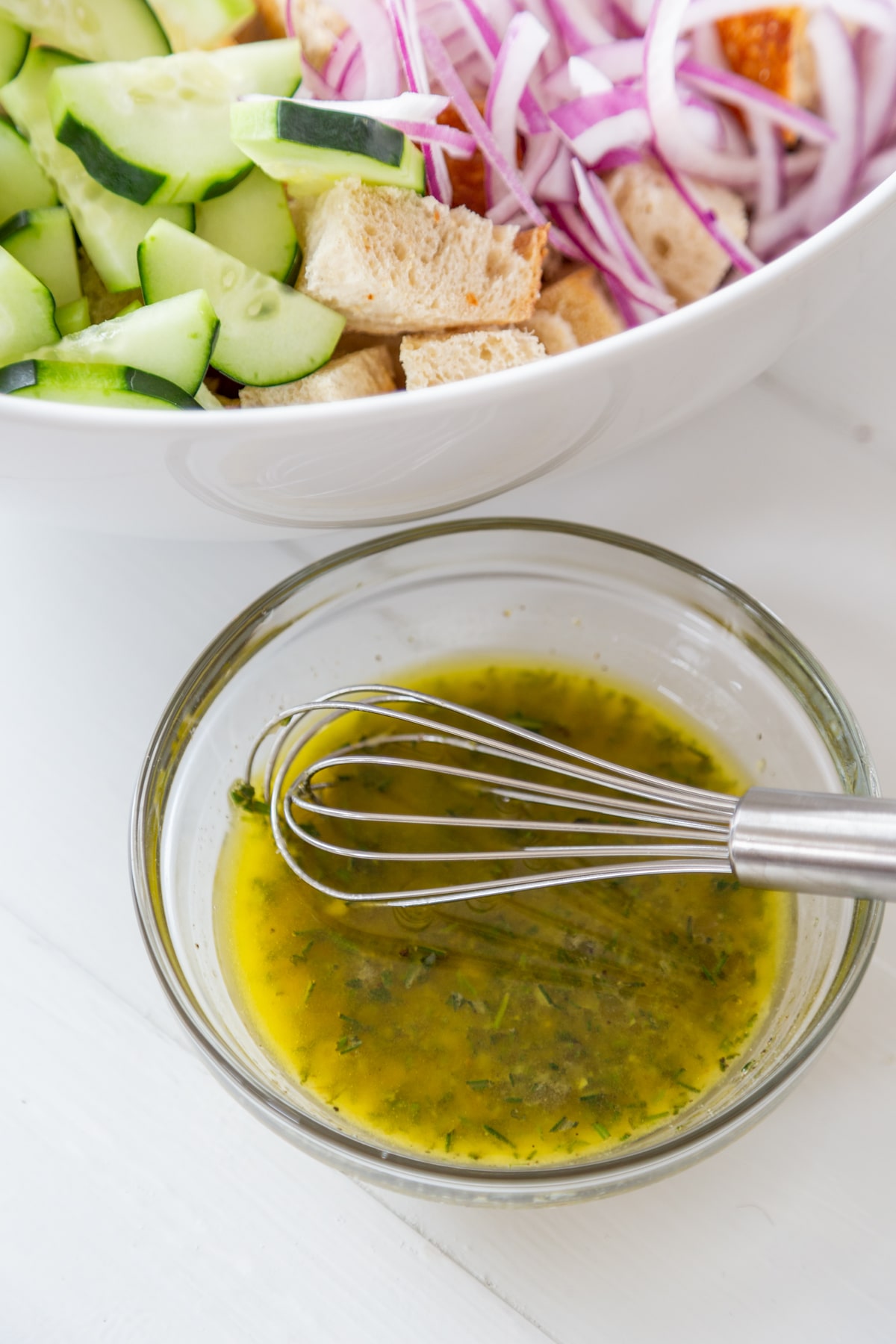 Whisk the olive oil, vinegar, Italian seasoning, and salt and pepper to taste to make the dressing.

In a large bowl, toss the bread, tomatoes, cucumber, and onions with the dressing and let it sit until the dressing soaks into the bread and it begins to soften.

We like it when the center just begins to soften but the edges are still crunchy. 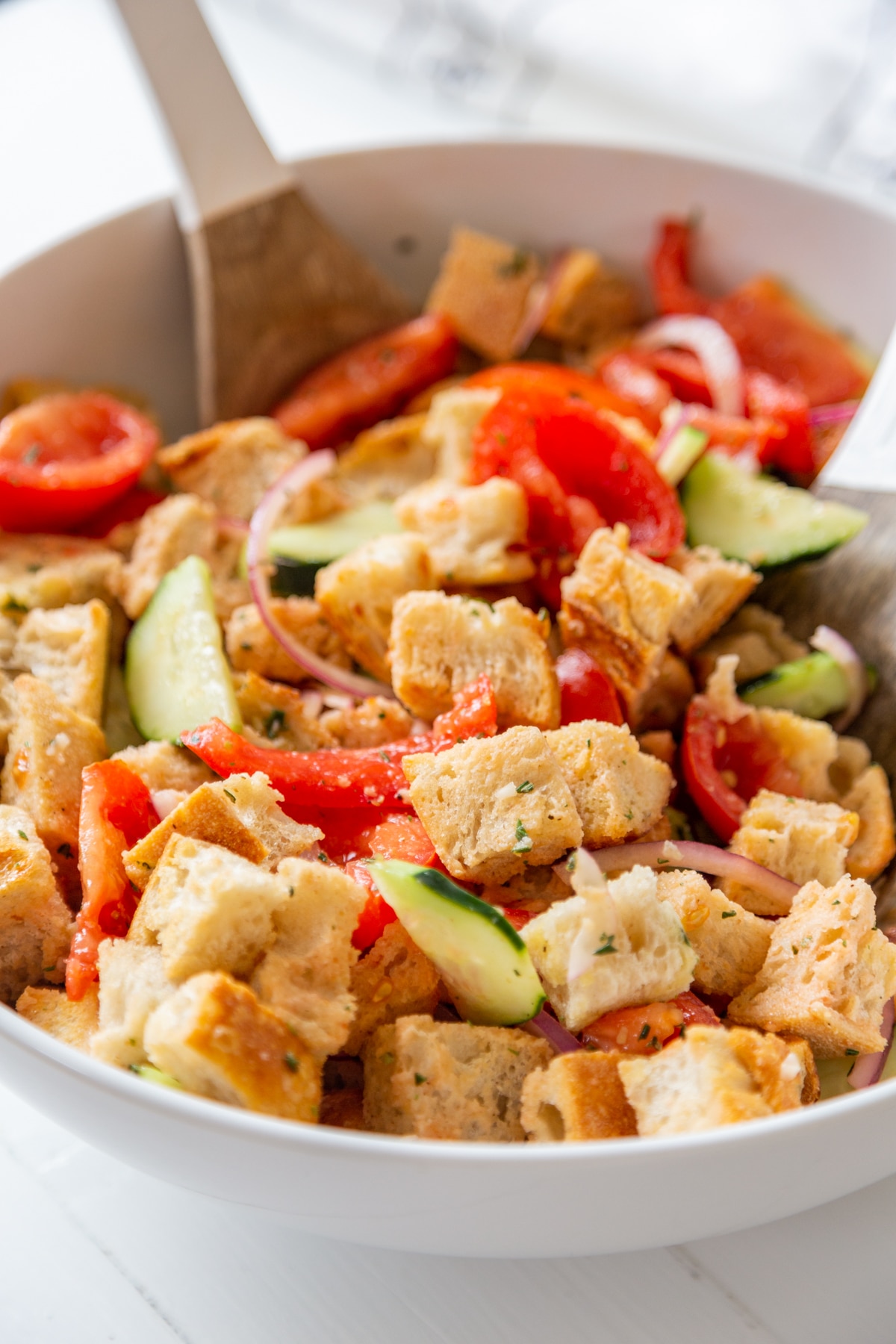 How to Serve It

You can add vegan cheese for protein to make this salad a meal, or you can serve it as a side dish.

This salad is best eaten the same day it’s made so the bread is slightly soft and the edges are crunchy.

If you like the texture of a classic Panzanella, then store it in the refrigerator overnight. 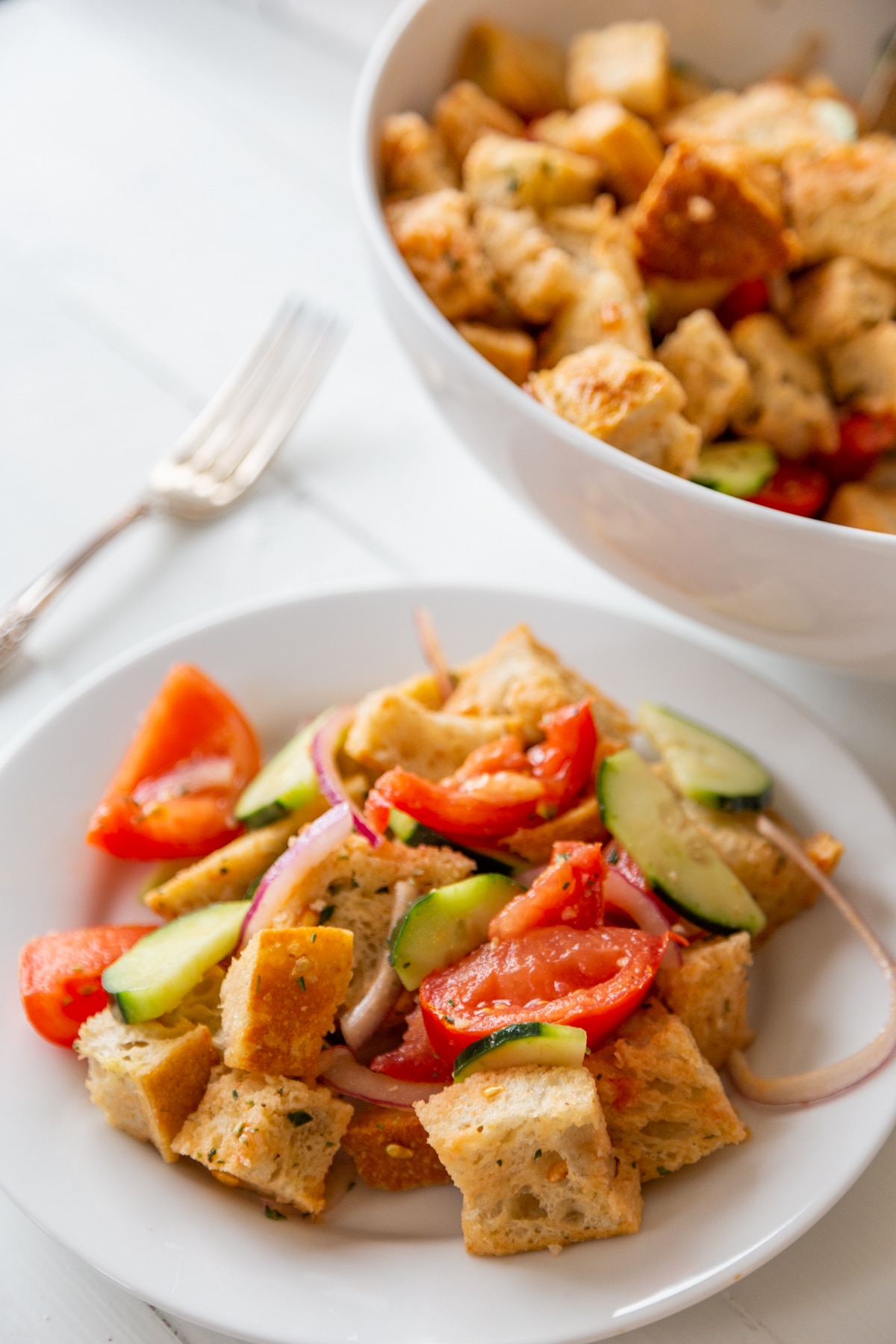 Make our Panzanella salad recipe and let us know what you think. We love to hear from you! And, don’t forget to take a picture of your gorgeous creation and tag us @veganosity on Instagram. 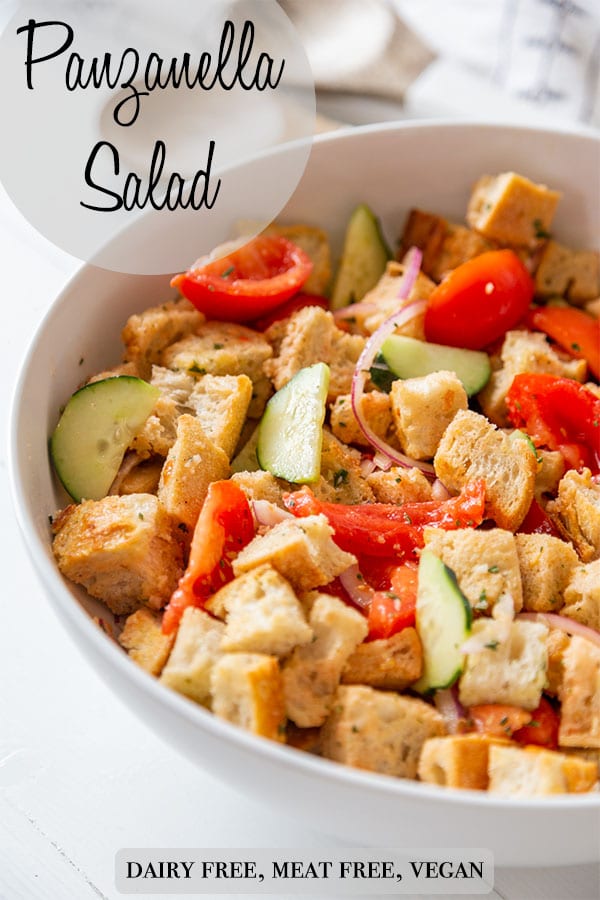 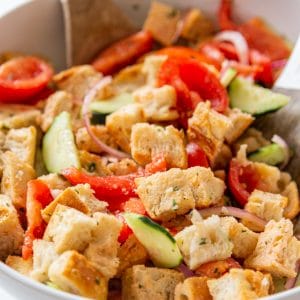 NUTRITION DISCLAIMER NOTE: THE NUTRITIONAL INFORMATION FOR THIS SALAD DOES NOT LOOK ACCURATE. THE SODIUM COUNT IS INACCURATE, AS WE DON'T LIST AN AMOUNT OF SALT, JUST "SALT TO TASTE."    STALE BREAD – We get approximately 6 cups from a half of a large baguette or a half of a loaf of Italian or sourdough. Note that the sourdough will alter the taste, but it’s still good. This salad is best when eaten the day it’s made. If you don’t mind the bread to be mushy, store covered in the refrigerator overnight. 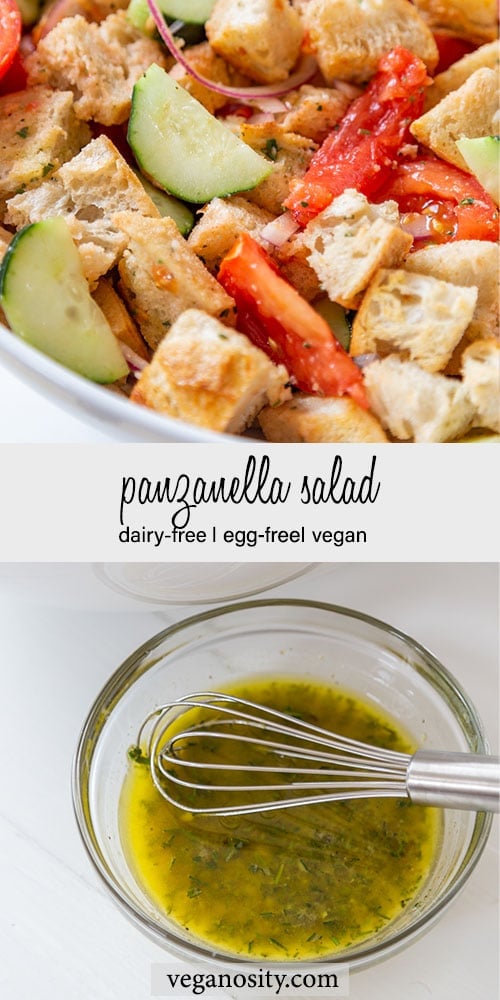