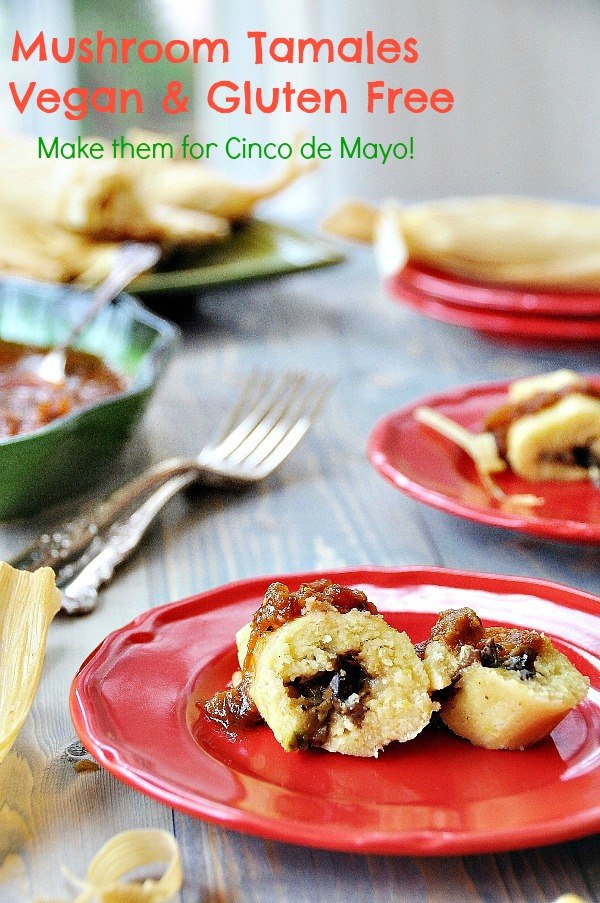 If you’re looking for a hot tamale to bring to your Cindo de Mayo party tomorrow you’ve come to the right place. 😉

Settle down, I’m happily married. I’m talking about the real deal, a soft and tender corn tamale with a spicy mushroom center. Amor a primera mordida! 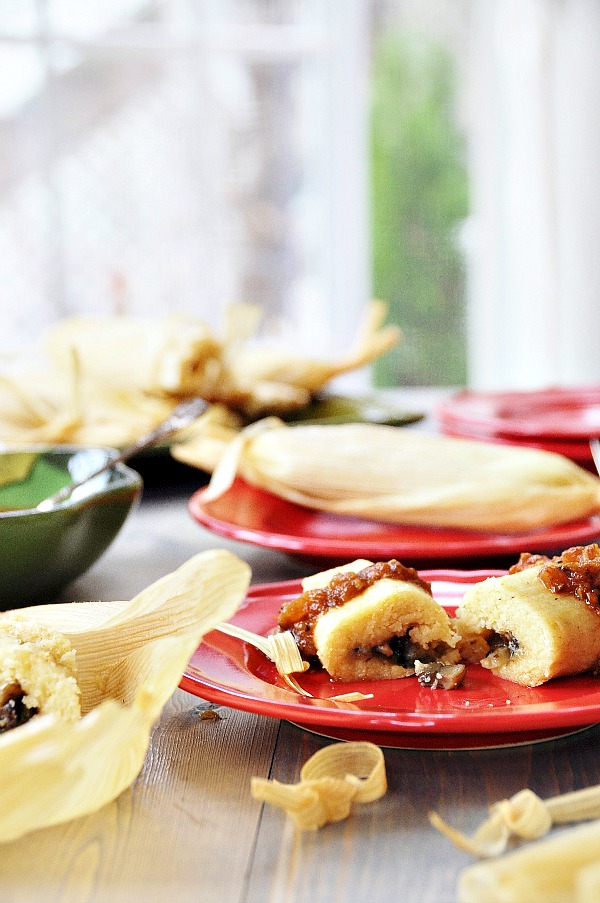 If you love tamales as much as I do then you really need to make your own. It’s not as hard as you might think, and there’s nothing like opening up a corn husk and cutting your fork through a fresh hot tamale filled with spicy and umami chipotle mushrooms.

You can fill your tamales with whatever you feel like filling them with, but I was in the mood for a meaty and savory mushroom filling when I made these, and they were divino!

The first thing that you’ll need to do before making your tamales is soak the corn husks for about an hour. This recipe makes between sixteen to eighteen tamales so soak twenty husks. Sometimes they tear, and you’ll need two to cut into strips to use to tie up the ends of the wrapped husks. Do you see how I use a bowl full of water to prevent the top leaves from floating above the water line? 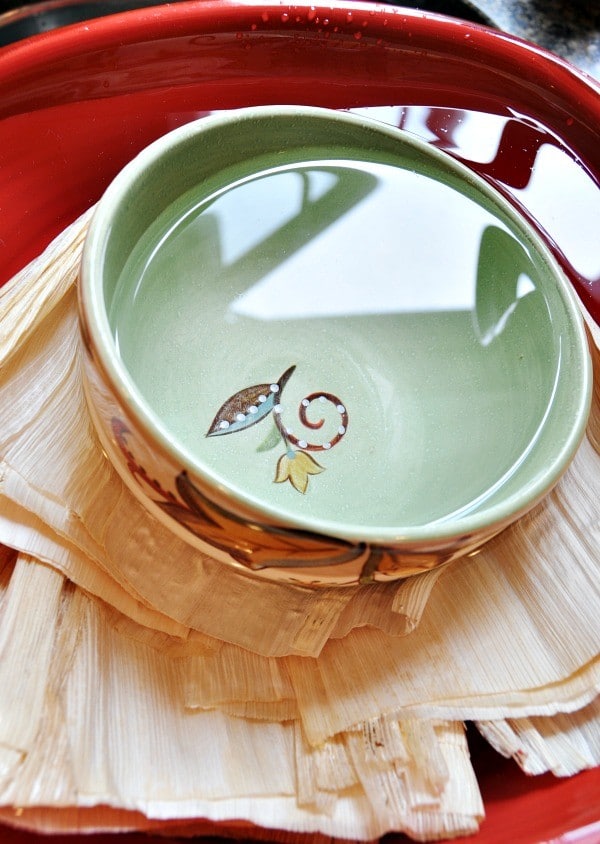 About thirty minutes before the husks are ready to be taken out of the water and dried you can start to make the masa dough and the mushroom filling.

For this recipe I used white mushrooms and diced them up into small pieces. I diced an onion and a jalapeno pepper and sautéed them with the mushrooms and seasoned them with spicy chipotle cayenne pepper, salt and pepper. Delicioso!

Lastly, I made the masa dough. You’ll want to do this last so the dough doesn’t have a chance to dry out while you’re preparing everything else. Whisk up the dry ingredients and then whip the vegan butter until it’s light and fluffy, then add the masa mixture and mix until it has a smooth and sticky texture. Now the fun begins.

Lay a corn husk down on a flat surface and spread the masa dough evenly on the husk. Put some mushroom filling in the center of the dough and roll one side of the husk toward the center so the dough folds over the filling. Now tie the ends up with the corn husk strips that you cut up earlier. Keep on going until you’ve used up all of the masa and filling. I ended up with a little extra filling so my husband heated it up and topped his tamales with it, along with some chipotle salsa.

Steam the tamales in a large pot with a steamer basket for an hour and then remove them from the pan and let them cool until you can handle them without burning your fingers.

And now, the moment you’ve been waiting for – drum roll please. Strip off the ties on the ends of the husks, and peel off the corn husk to expose the spicy hot tamale underneath.  Top it with any extra filling you have left over and a big spoon of salsa. Be still my heart!

The tamale will look like a little yellow banana. Very cute. But that cuteness will turn into steamy burning desire once you take that first bite of sizzling mushroom filling. Arriba!!

That corn dough is so tender and chewy, with a mild flavor that compliments the spicy chipotle mushroom filling. If ever there was a way to describe that phrase, opposites attract, these tamales would be it. If you can get through eating one without vocalizing your approval with an mmmm, or an ahhhh, you’ve got some major self-control. But honestly, what’s the fun in that? Let loose and savor the moment like a wild child.

Enjoy Cinco de Mayo with a few (or more) Chipotle mushroom tamales – vegan and gluten free (awesome), some guacamole, tacos, and a margarita. Sounds pretty good, doesn’t’ it? I can hardly wait for tomorrow! 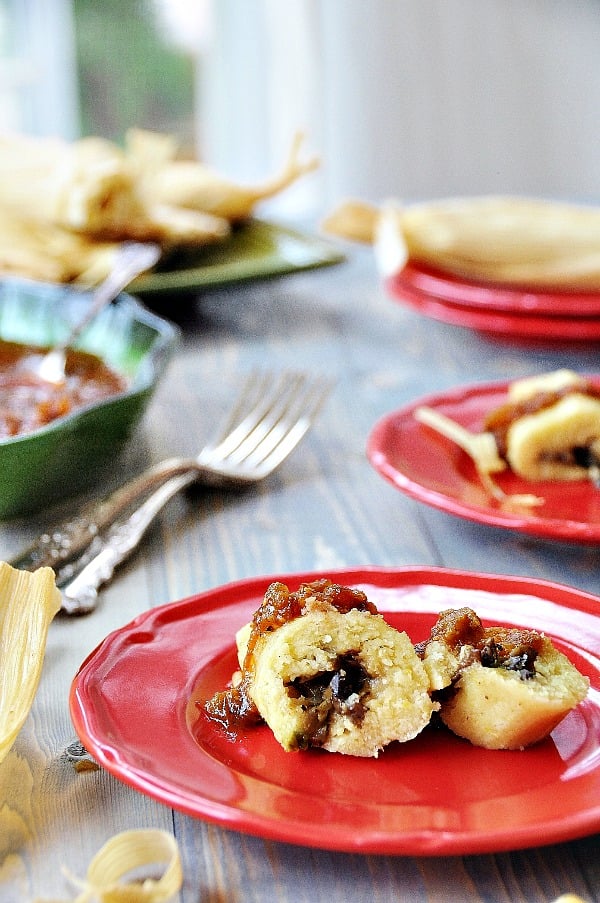 Tell me, what are you doing for Cinco de Mayo?

How do you like your margarita, on the rocks or blended?