Tender Orecchiette coated in a creamy vegan cashew cream sauce, and roasted cauliflower and tomatoes with smoky mushroom bacon. A bowl of this in front of a crackling fire will get you through the coldest of winter nights. 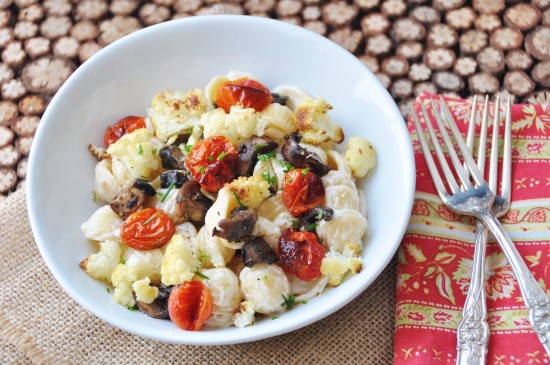 How is winter in your part of the world? Here in Chicago, the weather outside is frightful. We have snow, temperatures in the single digits, and a wind chill that makes it feel like I’m living in Siberia. This is winter at its worst, and it makes me crave a hot, comforting bowl of pasta. Something healthy, but stick to my ribs delicious, like this creamy Orecchiette roasted cauliflower & smoky mushrooms. Doesn’t that sound good?

This perfect and simple little recipe is all that and more. The creamy cashew sauce makes it seem like I’m eating a bowl of pasta with Alfredo sauce, only there isn’t a drop of real or fake dairy in it. There are also sweet, caramelized roasted tomatoes. And it gets better, because there are pieces of roasted cauliflower in the mix. Crispy, savory little bites of the new “it” vegetable. That’s right, cauliflower has knocked kale out of the top veg spot for 2015. Look for lots of cauliflower recipes from Veganosity this year. Finally, where there’s smoke, there’s Portobello mushroom bacon. Oh my gosh…..

Are you hungry yet? 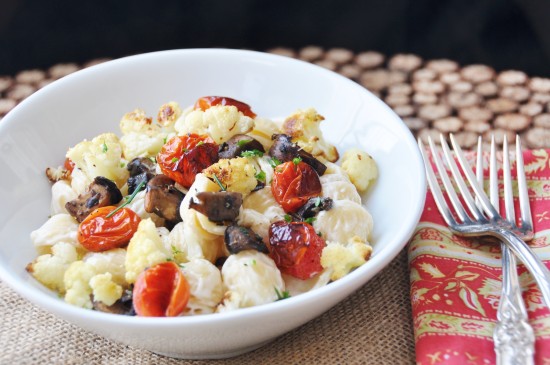 Yeah, I thought so, grab a fork and dig in. Try and get a little bit of everything on your fork. Uh huh, it really doesn’t get more heavenly than this. It’s simple food, with simple ingredients, but there are so many flavors and textures, all of them made for each other.

Simple is another food trend for 2015. Simple, locally sourced, seasonal food. I like that. I think that the more complicated a recipe is, the less you can actually taste the ingredients in the dish. Herbs and seasonings should complement, not change or mask how the vegetables taste. Don’t you agree? 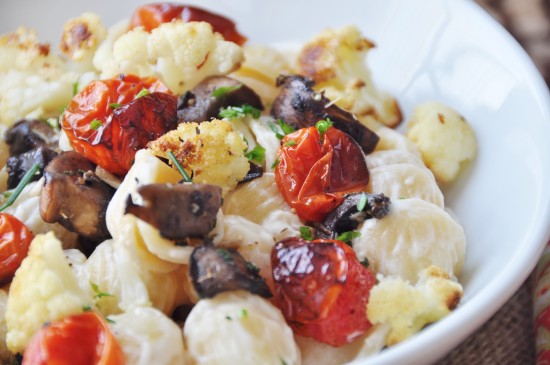 Make this for your Veganuary dinner tonight. Or make something else that's comforting and warm, like Vegan Garlic and Rosemary Potato Soup, or Vegan Zucchini Chili.

This is the year to really show people how incredibly delicious, simple, and fresh vegan food can be. If you have a recipe that you want veganized, just ask. We are always looking for a challenge. 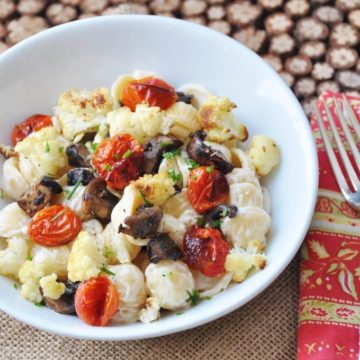 Tender Orecchiette coated in a creamy vegan cashew cream sauce, and roasted cauliflower and tomatoes with smoky mushroom bacon. A bowl of this in front of a crackling fire will get you through the coldest of winter nights.
No ratings yet
Print Pin Rate
Course: Entree
Cuisine: American
Prep Time: 20 minutes
Cook Time: 30 minutes
Total Time: 50 minutes
Servings: 4 -6
Calories:
Author: Linda & Alex